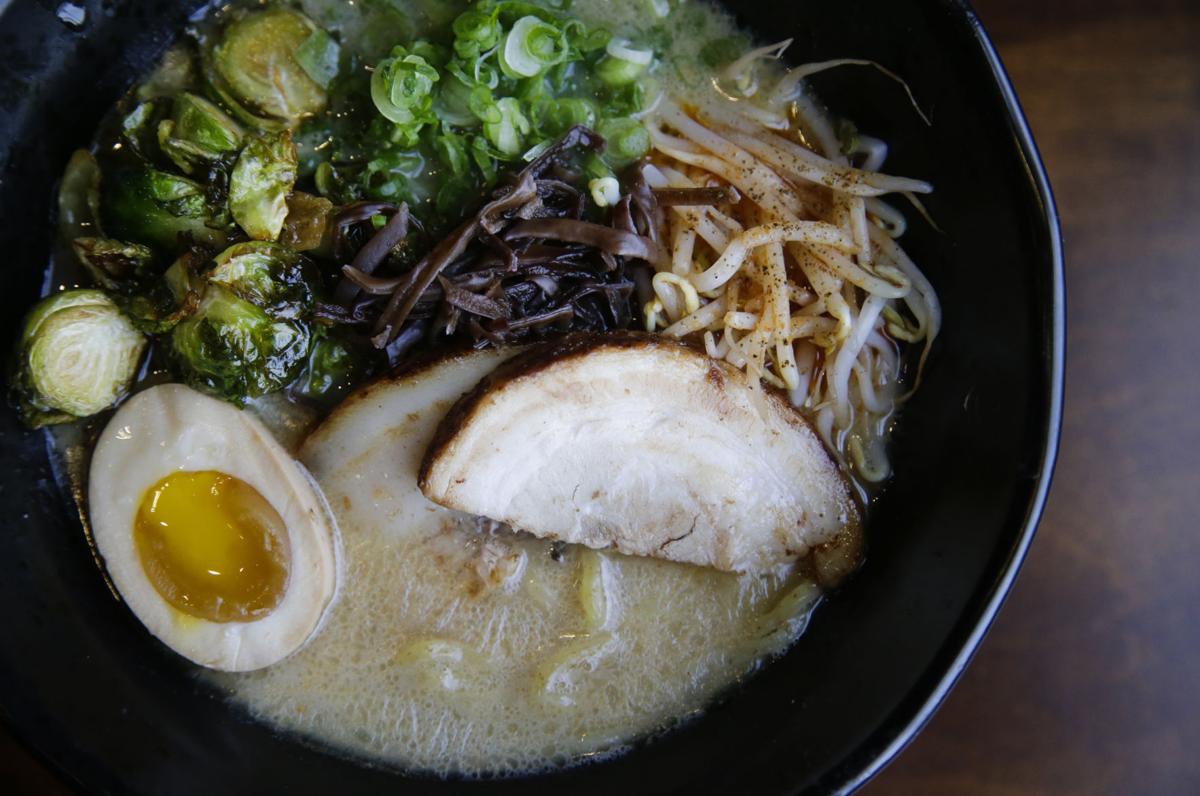 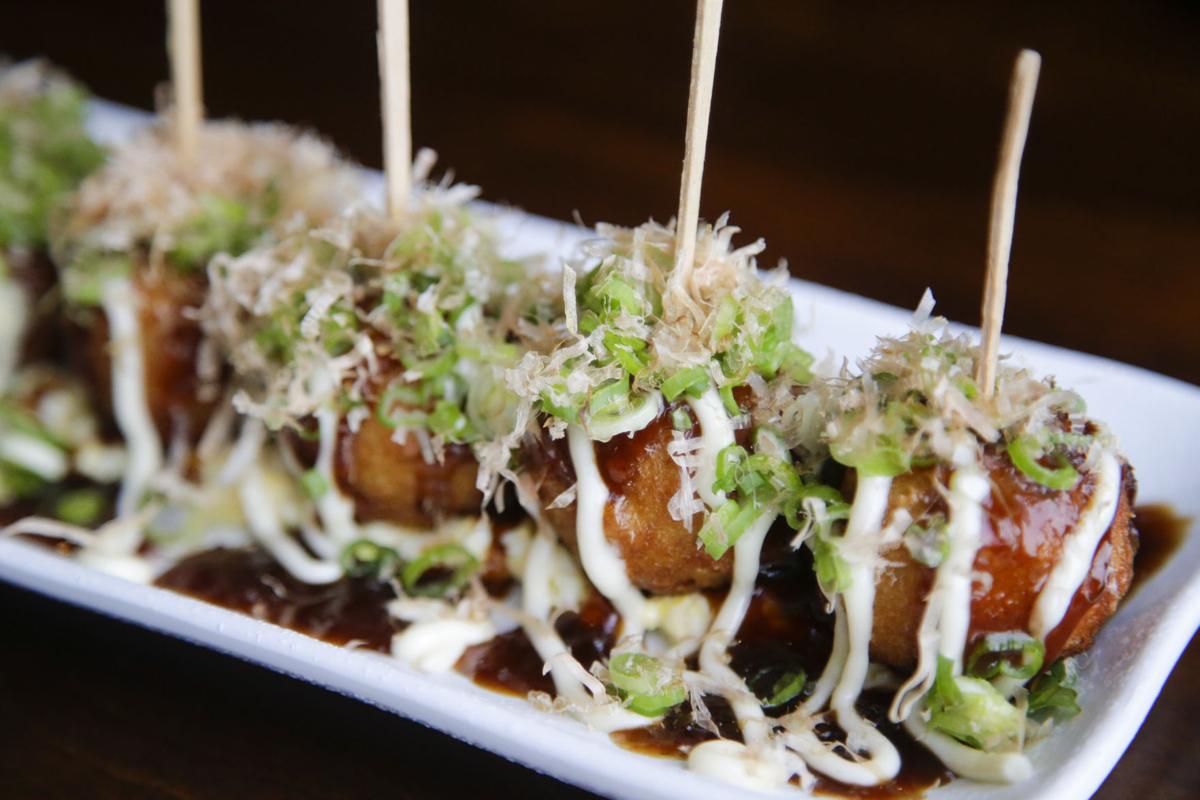 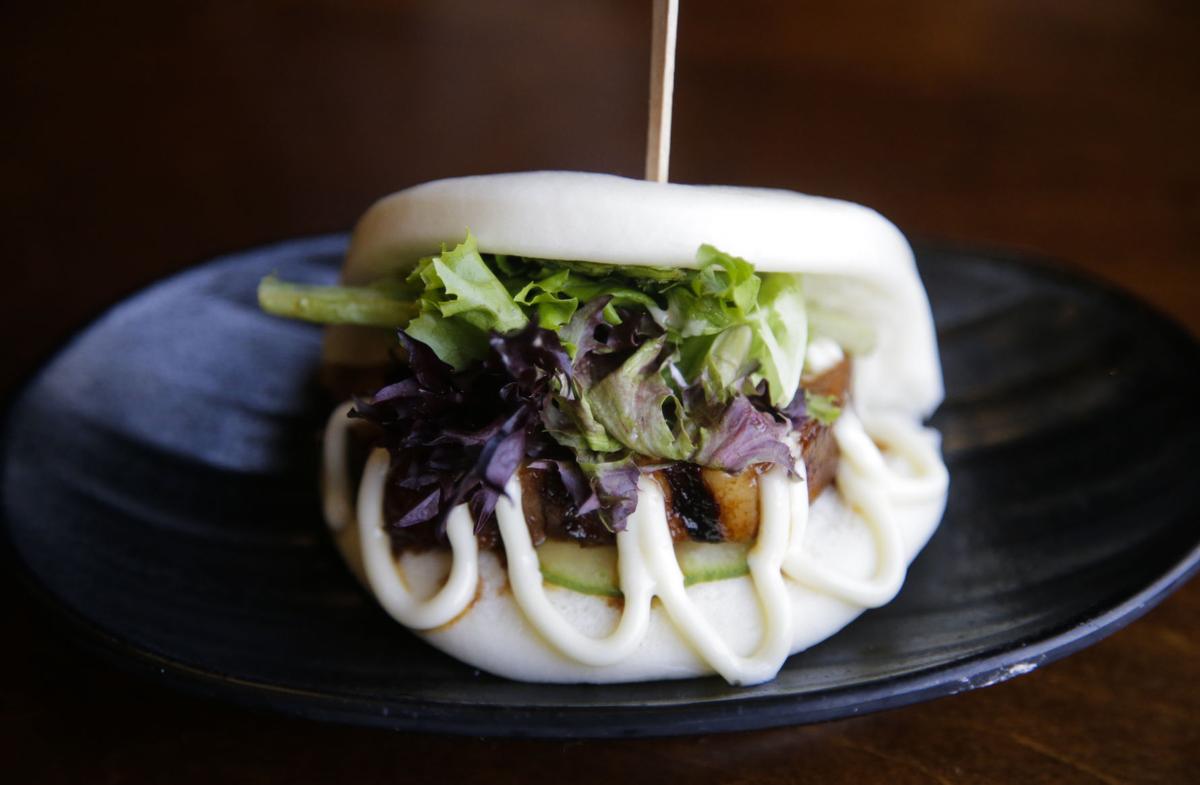 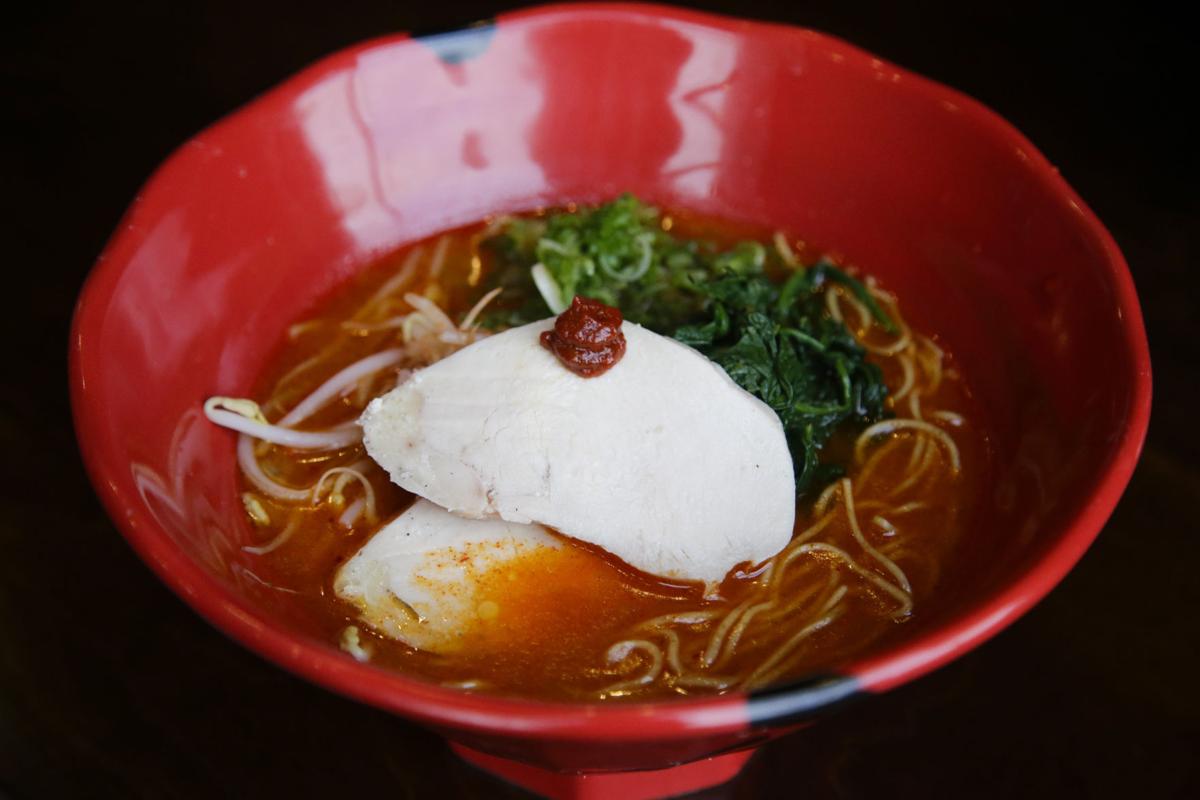 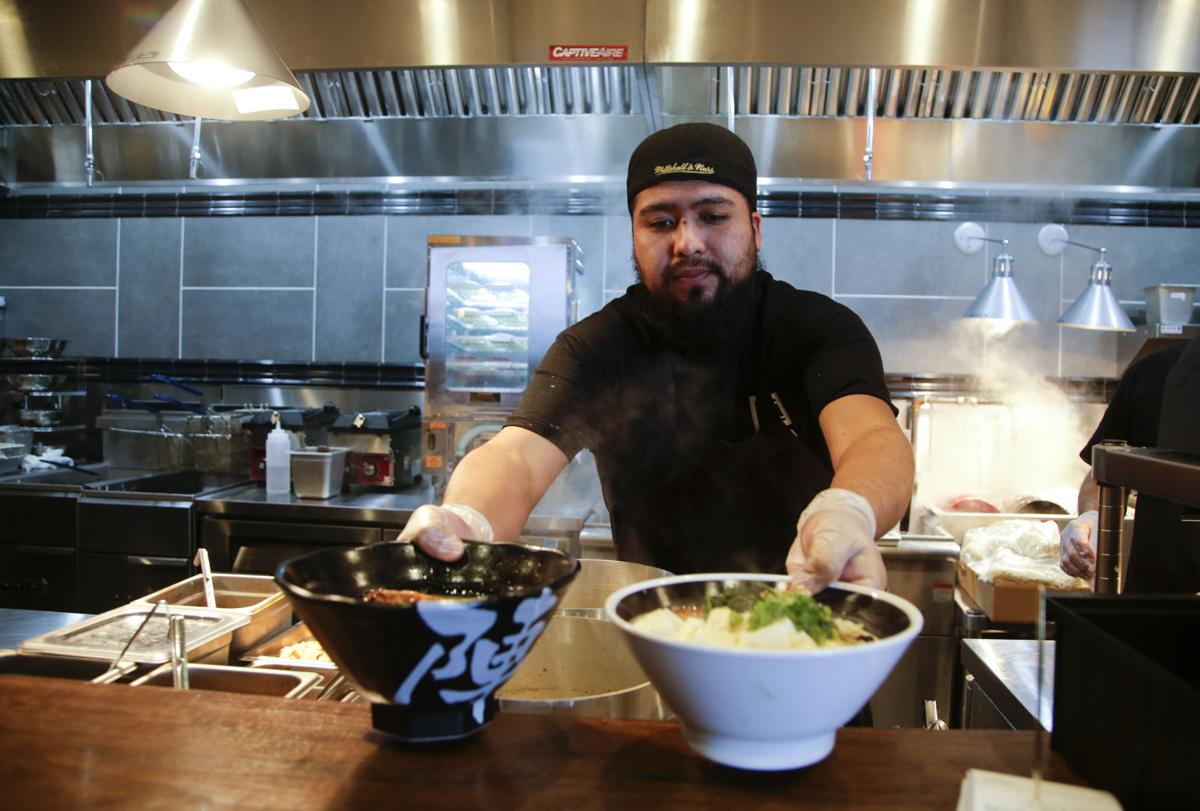 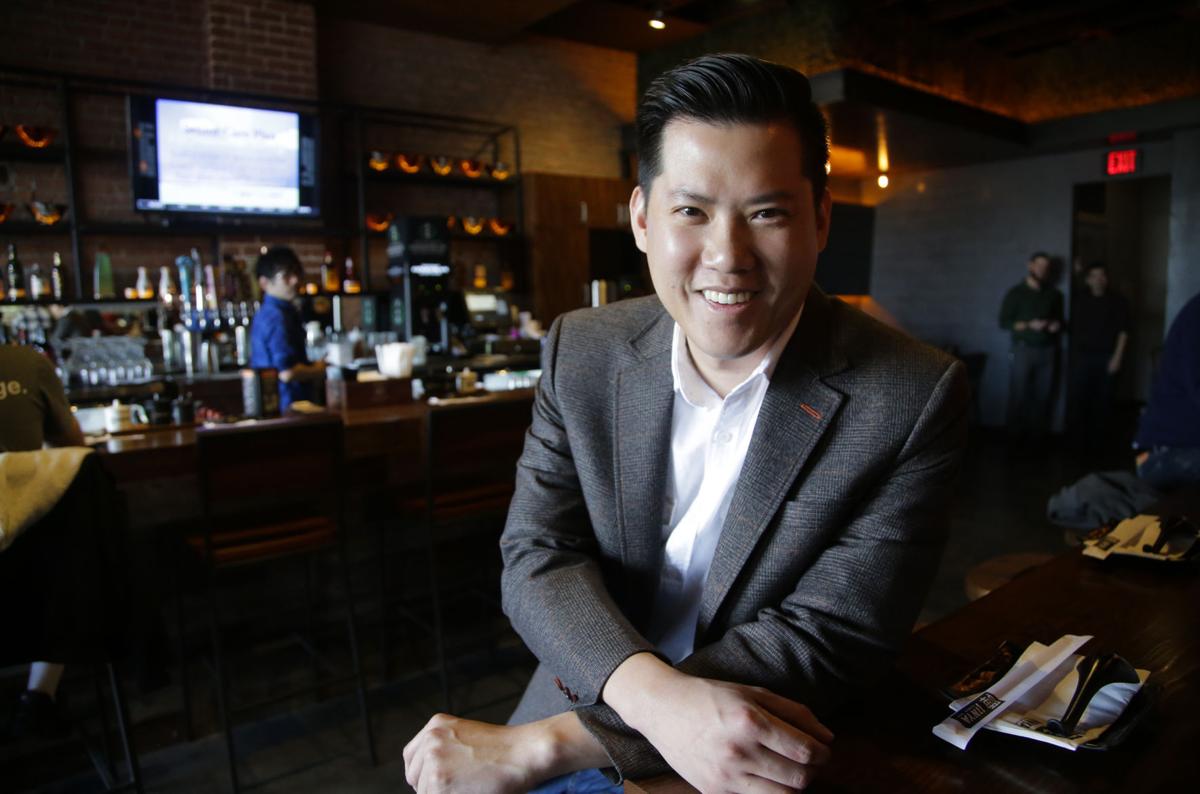 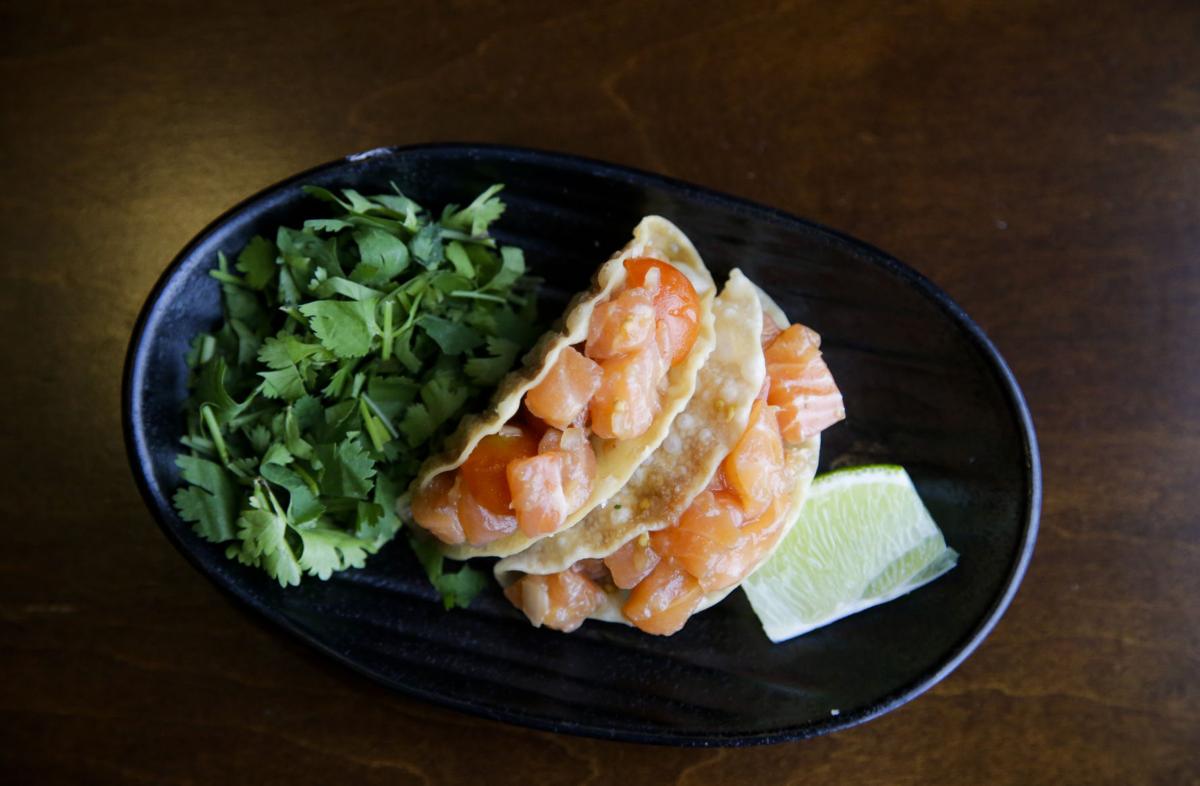 Salmon poke is a raw-fish dish prepared as a taco and served as an appetizer at JINYA Ramen Bar. JESSIE WARDARSKI/Tulsa World

It was a bitterly cold afternoon when I went to the new JINYA Ramen Bar downtown to interview owner Dave Soparkdithapong.

Apparently so. At a time in the afternoon when most restaurants are nearly empty, JINYA had a nice crowd slurping up bowls of hot ramen. When we had dined there on an equally frigid weeknight, it was packed.

JINYA is a franchise restaurant, but only 20 are in the chain so far. Most of the others are located in larger cities, such as Houston, Austin, Los Angeles, San Jose, Chicago and Washington, D.C.

It was started in 2000 in Tokyo by Tomonori Takahashi, whose father owned a restaurant in Japan. Following a subsequent trip to the United States, Takahashi opened his first restaurants, starting in California.

“I came across JINYA in Houston when I worked in the oil and gas industry,” Soparkdithapong said. “I thought I could bring something new to Tulsa and thought JINYA would be a good fit.”

JINYA’s menu includes some salads, small plates, tacos, rice bowls and desserts, but it is the ramen that takes center stage.

We had the Sprouting Up ramen ($12.95) and the chicken ramen ($10.95). We had a choice of 20-plus items to add to the bowls for a modest additional charge, but we liked the makeup of the dishes as they were presented on the menu.

Those who devour their noodles and other goodies in the bowl before finishing the broth may order a fresh batch of hot noodles ($2.50) for the remaining soup.

JINYA offers a variety of mild and spicy ramens, including vegetarian and vegan, and all are served in big, colorful, cone-shaped bowls imported from Japan.

The salad was a vegetarian mix of baby greens, green kale, broccoli and white quinoa tossed in a mild sesame dressing, corn and cherry tomatoes. It had a nutty, fresh flavor.

The pork gyoza featured six small dumplings wrapped around ground pork. The table had a jar of gyoza sauce made specifically for this dish. The main ingredients most likely were red wine vinegar and sesame oil with a touch of hot sauce.

Jessica Rodrigo, the World’s food writer, reported the takoyaki ($7.50), battered octopus over egg tartar topped with kewpie mayonnaise, okonomiyaki sauce, green onion and smoked bonito flakes, is worth a look. Soparkdithapong said it has been a big seller, too.

We ended the evening with an order of panna cotta, a rich, thick, creamy custard with caramel cream sauce, bits of graham cracker on top and a scoop of vanilla ice cream.

JINYA has a sleek, modern look with lots of brick and wood, a bar area with a television, counter seats to the open kitchen and a communal table, in addition to tables and chairs.

Depending on where one sits, lighting might be a little dim to easily read the menu. I used the light on my phone for the small print.

Our main server, Hannah, was training a new staffer, Robert, and they did a superb job.

When guests enter the restaurant, the staff yells “irasshai,” or “welcome” in Japanese.

Here’s why you should eat more cranberries

Did you know cranberries are the original U.S.-grown super berry?

Marsh to table: How the holiday cranberry graces our tables each year

Take a look at the history and future of cranberries, Wisconsin’s top crop, with a fifth-generation cranberry farmer.

This pecan and herb crusted prime rib entrée is the type of dish where everyone leaves the table completely full and satisfied.

Salmon poke is a raw-fish dish prepared as a taco and served as an appetizer at JINYA Ramen Bar. JESSIE WARDARSKI/Tulsa World