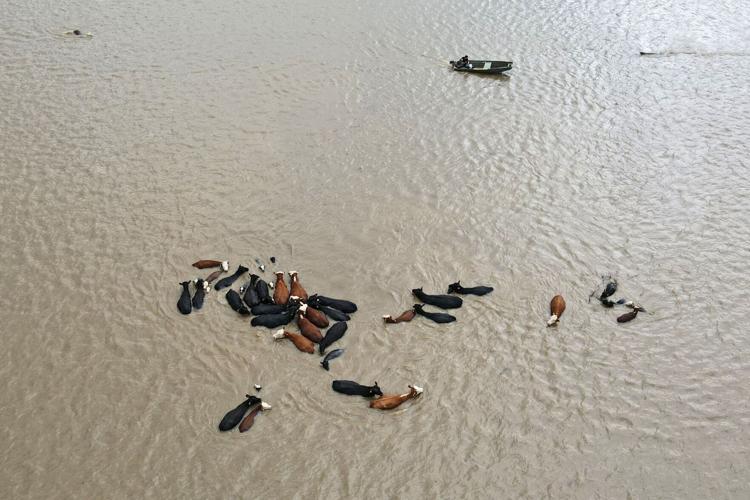 Volunteers use a boat to try to push cattle to higher ground in floodwater on Oklahoma 16 west of Muskogee on Thursday. 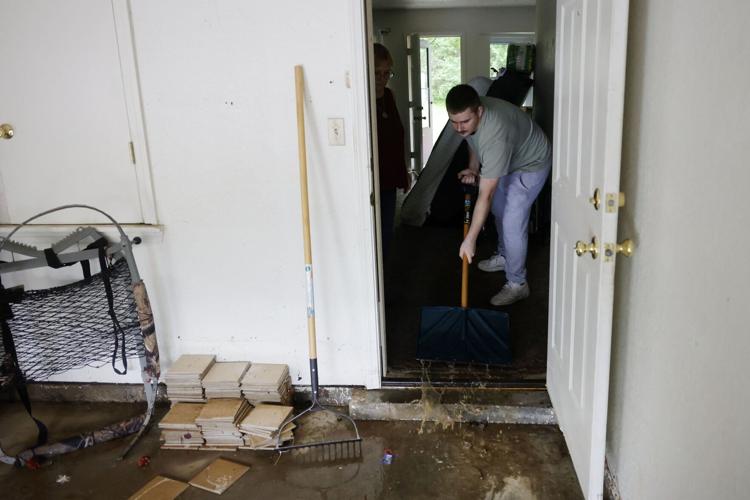 Jerry Stewart uses a snow shovel to push floodwater out of his home in The Meadows subdivision on Thursday in Muskogee. 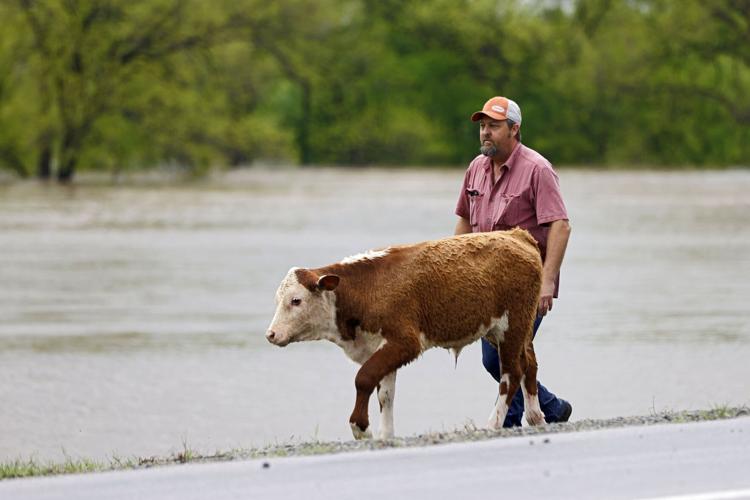 Volunteer Chucky Bolding walks a calf to dry ground after helping rescue it from floodwaters on Oklahoma 16 between Haskell and Muskogee on Thursday. 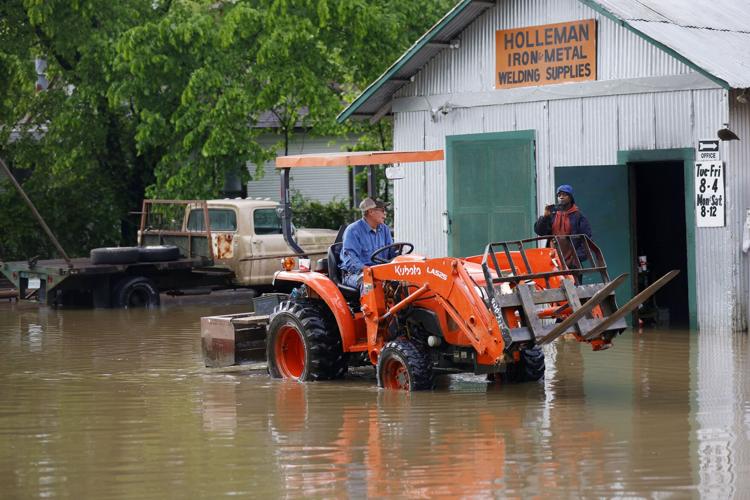 Rickey Stevens with Holleman Iron and Metal uses a tractor to navigate flooded 2nd Street at the business on Thursday in Okmulgee. 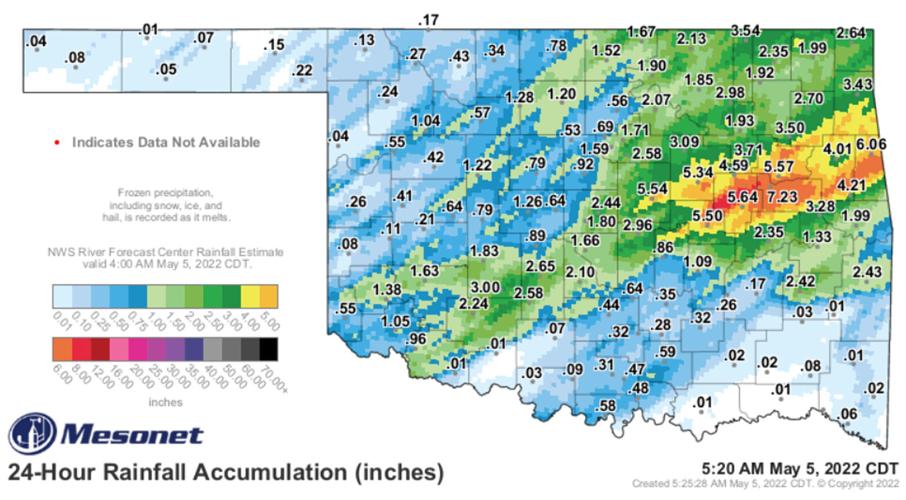 "Flooding of rivers, creeks, streams, and other low-lying and flood-prone locations is imminent or occurring," a flood statement reads.

Wind gusts are up to 40 mph with penny sized hail.

Doppler radar indicated strong thunderstorms extending from near Catoosa to 3 miles southwest of Stonebluff at 35 mph.

Update (10:40 a.m.): Radar indicates a strong thunderstorm with the potential for nickel-sized hail late Thursday morning for portions of northern Okmulgee, northwestern Muskogee and southeastern Tulsa counties. Winds are expected to gust to 40 mph, according to National Weather Service Tulsa.

Update (8:45 a.m.): A river flood warning is in effect for the Arkansas River near Muskogee and Verdigris River near Lenapah.

The Arkansas River is expected to rise above flood stage later Thursday morning to a crest of 31.6 feet this evening, according to forecasters for National Weather Service of Tulsa.

Update (6:15 a.m.): Flood warnings are in effect in the Tulsa area through 3 p.m. with 1-4 inches of rain already having fallen.

"Flooding of rivers, creeks, streams, and other low-lying and flood-prone locations is imminent or occurring. It will take several hours for all the water from these storms to work through local drainage systems in urban areas. The flooded roadways will impact the morning commute," according to forecasters with National Weather Service Tulsa.

In Muskogee, public schools will be virtual on Thursday due to flooding, according to an early-morning post from district administrators.

Update (5:30 a.m.): As of 4:21 a.m. extensive flooding was reported across portions of Okfuskee, Okmulgee and Muskogee counties.

"Between 3 and 8 inches of rain have fallen across much of the warned area with localized amounts near 10 inches. Additional rainfall amounts around one half inch are expected in the warned area early Thursday morning," according to National Weather Service Tulsa.

In the Meadows neighborhood in Muskogee, residents report being trapped by flooded roads, with some being evacuated by boat. Elsewhere in the city, Peak Boulevard (State Highway 165) to York Street is reported to be impassable.

As of 2:30 a.m., Muskogee County Commissioner Ken Doke reported flooded roads have blocked all access to the Gooseneck Bend area.

"I’m getting messages from friends in Muskogee saying that their homes are flooding (from flash flooding). I’m sure that’s the case for many people across the county right now," Doke said on social media.

"All unnecessary travel this morning is strongly discouraged across Okmulgee County due to flooding," according to state officials.

• US-62 closed 1 mile east of the Cherokee County

• SH-10 at the railroad underpass in Fort Gibson

All unnecessary travel this morning is strongly discouraged across Okmulgee County due to flooding. The following are closed:

• US-75A/SH-16 at the railroad underpass east of Beggs

• US-75A at the railroad underpass north of Beggs — now open

Update 11:00 p.m.: Several schools in Seminole County have announced they will not have classes due to tornado damage or power outages.

"Our prayers are with you and your loved ones as we pull together and begin to assess damages and make repairs to homes, schools, churches, businesses and infrastructure," he said in an announcement on the school website.

The Academy of Seminole, a charter school in eastern Seminole, said on its Facebook page that it took a "direct hit" and will not be in session Thursday. Staff who were at the school when the tornado hit are all safe, the school said.

Butner Public Schools in Cromwell also announced they will be out of school Thursday.

Update 10:40 p.m.: The tornado warning in Okmulgee County was allowed to expire.

A severe thunderstorm capable of producing a tornado was located 4 miles west of Weleetka in Okfuskee County moving northeast at 20 mph. The tornado warning will remain in effect until 10:30 p.m.

Update 9:34 p.m.: All tornado warnings in Okmulgee and Muskogee counties were allowed to expire.

That storm cell is leaving Okmulgee County and is becoming less tornadic as it enters Muskogee County.

Severe thunderstorm warnings are still active in Muskogee and Wagoner counties, however, due to 60 mph wind gusts and quarter-size hail.

A tornado warning is still in effect in Okfuskee County until 9:45 p.m.

Update 9:20 p.m.: The tornado warnings for Okmulgee and Muskogee counties are set to expire at 9:30 p.m.

A severe thunderstorm capable of producing a tornado was located 4 miles northwest of Schulter moving northeast at 20 mph.

Update 8:40 p.m.: A damaging tornado has been confirmed on the ground in and east of Earlsboro in eastern Pottawatomie County just south of Interstate 40.

A storm that has already produced multiple tornados in central and eastern Oklahoma is now headed into northeastern Oklahoma, the National Weather Service reported.

Southwestern Okmulgee County is now under a tornado warning as the storm that blew through Seminole earlier Wednesday night moves northeast. Damage is being reported throughout the Seminole area, including downtown.

The storm then blew through Seminole about 7 p.m., before turning toward Cromwell.

At 8 p.m., a confirmed tornado was located in Cromwell, heading northeast, forecasters said. That storm then blew across Interstate 40 west of Okemah and went north of Okemah before entering Okmulgee County.

The storm does not have any confirmed tornadoes at this time, but a strong low-level rotation capable of producing a tornado was moving northeast in southwestern Okmulgee County at 20 mph.

A second tornado-warned storm with a radar-confirmed tornado located near Brooksville is also entering Seminole County, according to the National Weather Service.

Both tornado warnings in Okmulgee and Seminole counties are set to expire at 8:45 p.m.

Why does wearing lighter clothes in the summer make you cooler? Meteorologist Kirsten Lang explains

Why are we told it is best to wear light-colored clothing in the hotter months? Turns out, it’s not really a fashion choice as much as it is science.

Today will be hot and humid. Temperatures will start in the 70s this morning, but climb quickly and we will be in the low 90s by lunch with hi…

Temperatures continue to warm back into the 90s this afternoon with a south wind and mostly sunny skies. The humidity returns as well as dew p…

The heat rolls on: Watch your Independence Day weather forecast

Humidity and heat return for the weekend

Hot, humid conditions will persist again for today. There are many 4th of July celebrations taking place tonight in advance of Monday's holida…

Hot and humid heading into the holiday weekend

The heat and humidity move back in as we head in to the holiday weekend.

The forecast is showing a hot day in Tulsa. Temperatures are projected to be a quite steamy high of 97. Today has the makings of a perfect day…

Volunteers use a boat to try to push cattle to higher ground in floodwater on Oklahoma 16 west of Muskogee on Thursday.

Jerry Stewart uses a snow shovel to push floodwater out of his home in The Meadows subdivision on Thursday in Muskogee.

Volunteer Chucky Bolding walks a calf to dry ground after helping rescue it from floodwaters on Oklahoma 16 between Haskell and Muskogee on Thursday.

Rickey Stevens with Holleman Iron and Metal uses a tractor to navigate flooded 2nd Street at the business on Thursday in Okmulgee.