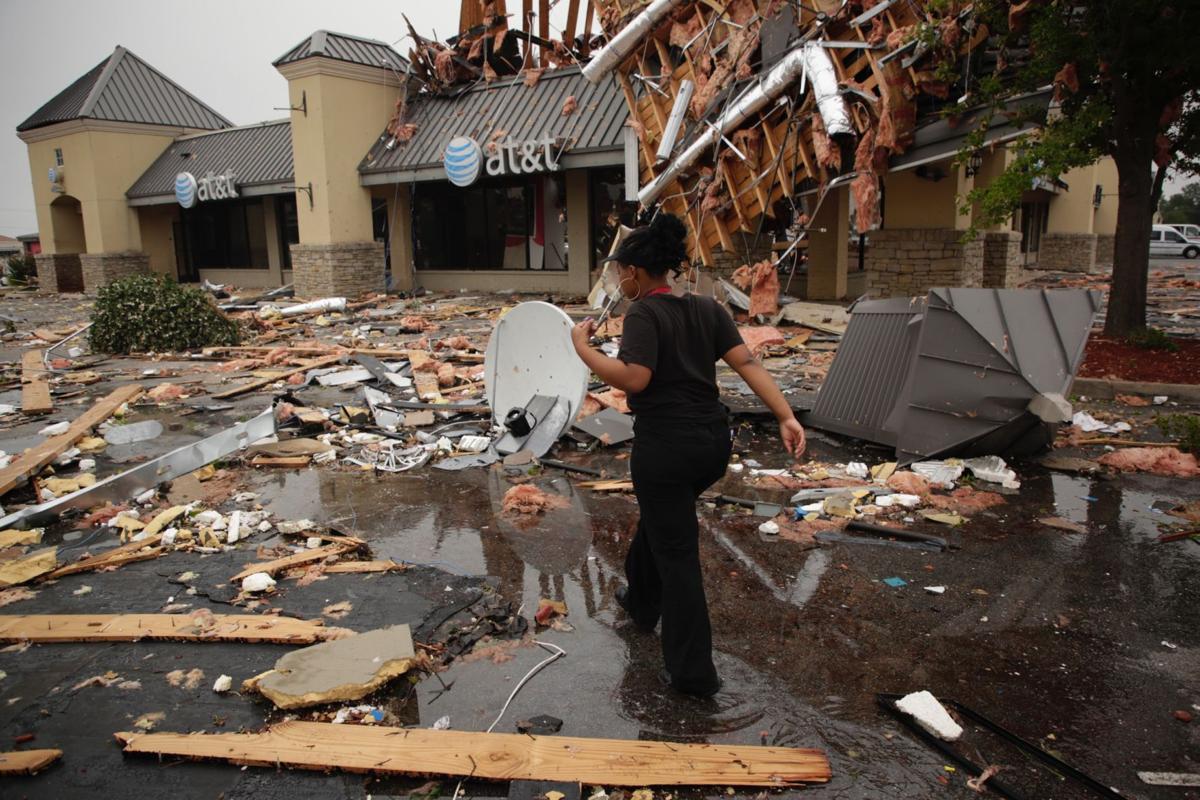 Ahreanna Hytche walks through tornado damage at Highland Plaza to get to work at Schlotzky's Aug. 7, 2017. MIKE SIMONS/Tulsa World 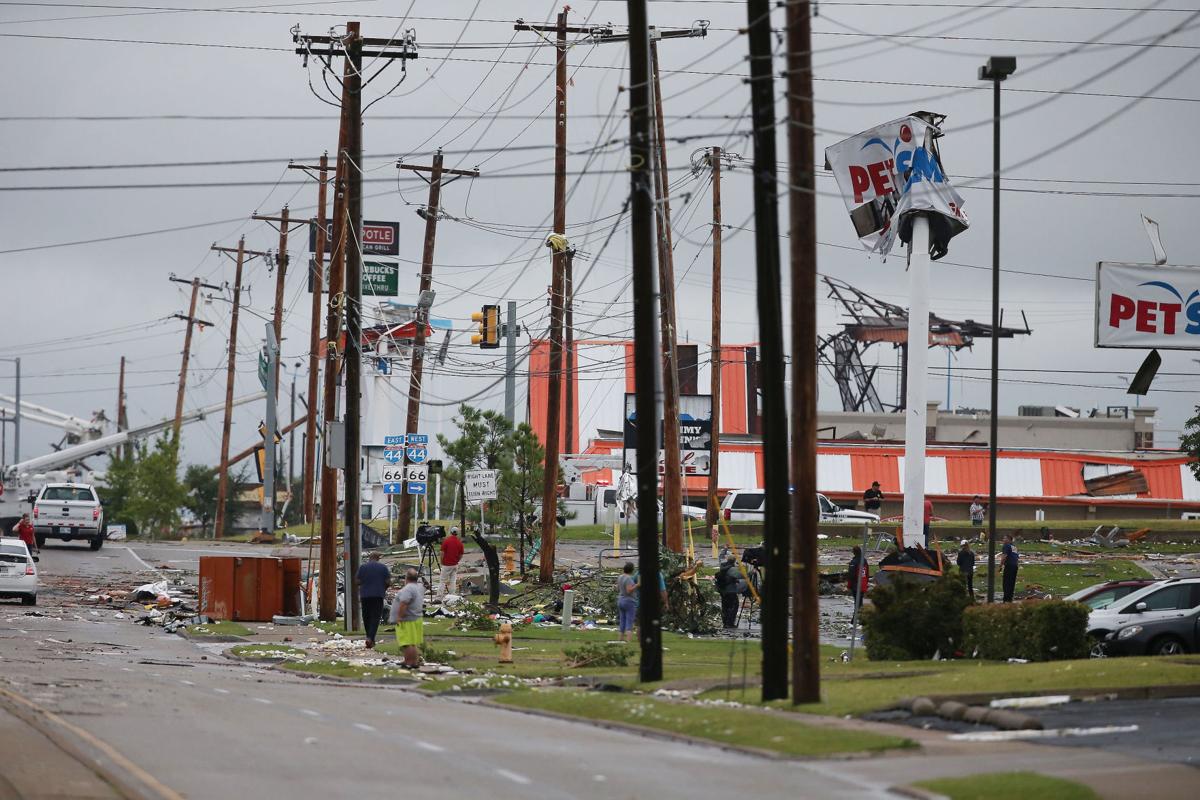 Damage left by a severe storm near 41st and Hudson on Sunday. TOM GILBERT/Tulsa World 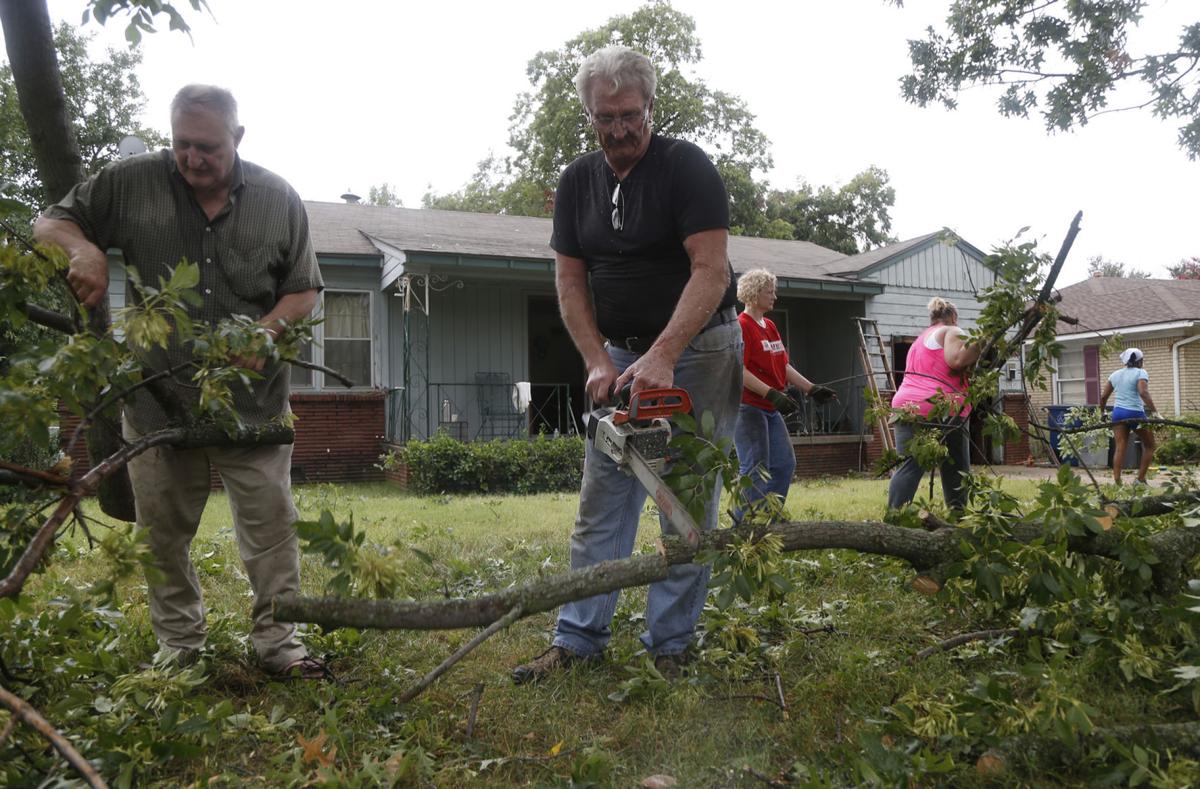 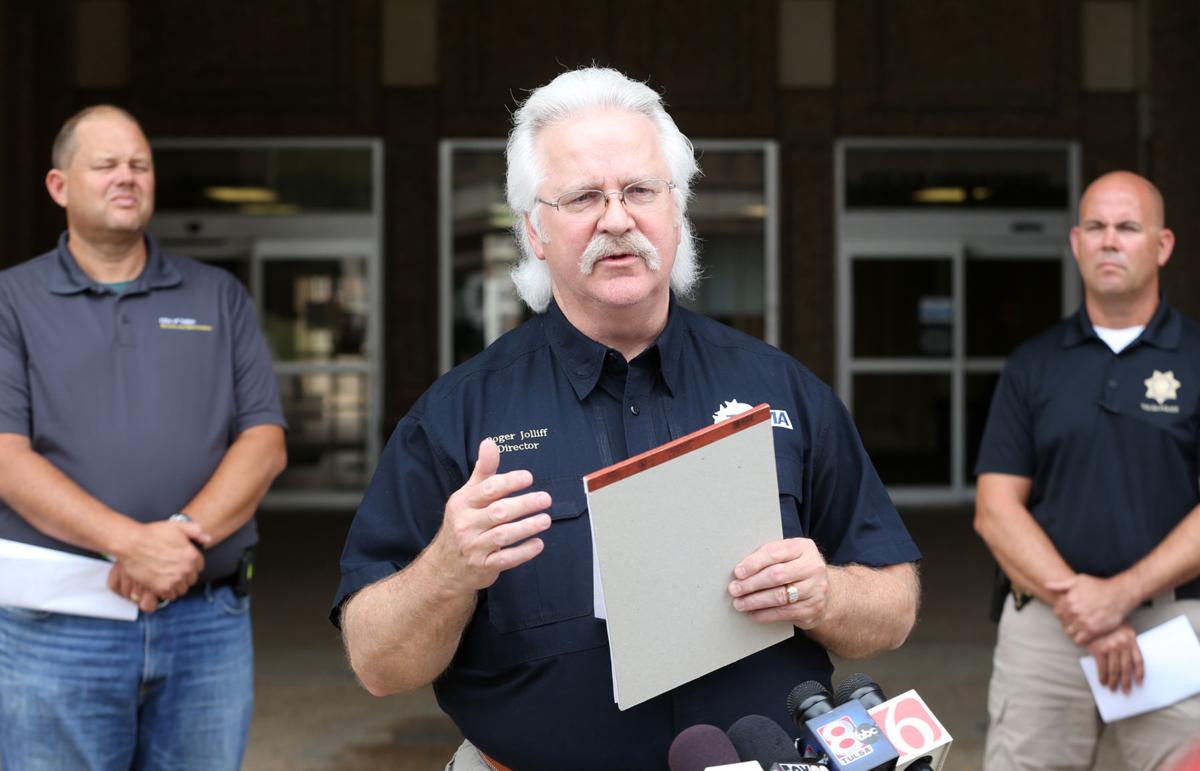 An unseasonable August tornado tore through midtown Tulsa early Sunday, damaging dozens of businesses and injuring at least 30 people who were surprised by the sudden spin-up.

The EF2 tornado touched down about 1:25 a.m. in midtown, and left a path of damage between 41st and 51st streets, stretching from Harvard Avenue to Mingo Road, according to a city of Tulsa news release.

EMSA ambulances transported 13 people with storm-related injuries to local hospitals in the aftermath of the tornado. Of those, eight were taken from a TGI Fridays restaurant near the 41st Street and Yale Avenue shopping corridor, and four were taken from a nearby Whataburger, spokeswoman Kelli Bruer said.

A spokeswoman with St. John Medical Center refused to comment on the number of patients who were treated at that hospital, citing federal privacy guidelines.

Sunday’s storm was unusual in two ways: It developed in August, after Oklahoma’s spring tornado season, and it developed rapidly out of what appeared Saturday evening to be a “garden variety” thunderstorm, said Roger Jolliff, Tulsa Area Emergency Management director said.

Since 1950, there had only been two previous tornadoes in August in Tulsa County, according to National Weather Service statistics. The first was an F1 in 1955, the second was an F2 in 1958. Sunday’s marks the third.

Data show tornadoes are rare throughout the state in August. Statewide, the month averages just over one, compared to the April average of nearly 12 and the May average of almost 23.

Jolliff learned Tulsa County was under a tornado warning about 1:25 a.m., and by that time the storm had already moved into Broken Arrow.

“To have warned, we would have been warning after the fact, which would not have been the right thing to do,” he said.

As crews cleared debris, 41st and 51st streets between Memorial and Sheridan were closed, in addition to 41st Street between Yale Avenue and Sheridan Road. The streets were to be closed through at least Monday morning.

Businesses in the shopping corridor at 41st and Yale were heavily damaged.

Tulsa Promenade mall, at the intersection of 41st and Yale, received structural and roof damage, though owner Mike Kohan doesn’t believe there was much product loss.

The storm left the mall without power, meaning it was closed for the last day of Oklahoma’s tax-free weekend. Kohan said the mall stands to lose thousands of dollars in sales.

“We missed a lot of tornadoes, but this time, I guess, we’re not lucky enough,” he said.

The mall will likely be closed until Tuesday.

Crews are working to restore the services. Most ATMs should still be operational, the statement read.

The storm also blew half the roof off the Whataburger when late night customers were inside. A nearby Chipotle was also hit, and an overturned car with a busted windshield sat in its parking lot Sunday morning.

Remington Tower, an 18-story office building near 41st Street and Skelly Drive, was severely damaged, and as of Sunday morning was without power and considered unstable, officials said.

As the storm passed through Tulsa, it brought with it 2.3 inches of rainfall, according to the National Weather Service. City crews closed roads at 81st and Elwood Avenue and near 1800 North Mingo Road because of flooding.

In the immediate aftermath, an estimated 17,000 American Electric Power-Public Service Company of Oklahoma customers were without power. Of those, approximately 14,100 were in the Tulsa metro area, according to a news release.

Many Tulsa residents slept through the storm and woke up to find fallen trees, downed power lines and other scattered debris Sunday morning.

Deputy Mayor Michael Junk, who is acting mayor while Mayor G.T. Bynum is out of state, said much of the residential damage is limited to downed trees and roof damage.

City officials will release a residential debris plan later this week, according to a news release.

Tulsa Police spokesman Sgt. Shane Tuell cautioned residents about insurance and assessment fraud in the aftermath of the storm. Those types of schemes are common following storms, and he urged residents not to give out their financial or personal information.

“Do not fall for any scammers coming door-to-door,” he said.

The Tulsa Police Department will monitor storm-affected areas until debris is cleared and the areas are safe to enter, Tuell said.

Why weren't the sirens activated?

No sirens were sounded in Tulsa during an early-Sunday morning suspected tornado because of its sudden appearance and rate of movement out of Tulsa.

"The National Weather Service issued a tornado warning at 1:25 a.m.," according to a statement from the city of Tulsa. "This particular storm spun up at such a quick rate between scans of the radar and by the time the NWS issued the warning, the storm was crossing into Broken Arrow."

By the time Tulsa emergency crews could have activated the sirens, the storm was already passing into Broken Arrow. Roger Jolliff, Tulsa Area Emergency Management Agency director, then warned Broken Arrow officials of the storm, according to the statement.

Jolliff said he tries to not "over-warn" in his job, because studies have shown people stop paying attention to sirens if they sound too often and seemingly without cause.

"We want to be safe (rather) than sorry, but you don’t want to be so safe that you cause other people to lose confidence in the decisions you're making," he said.

In a statement on his Facebook page, Tulsa Mayor G.T. Bynum said Sunday that city officials will review their technology and protocols for sounding warning sirens.

"We will make whatever improvements need to be made to best protect Tulsans," he said.

The city of Tulsa and the American Red Cross have received many calls from individuals and businesses that want to offer donations and assistance.

People are asked to call the American Red Cross at 918-831-1109 to coordinate volunteer efforts.

U-Haul Company of Tulsa is offering 30 days of free self-storage to residents who were affected by the severe storms and tornadoes early Sunday morning. Find participating sites at bit.ly/uhaulstorm.

Views from above as people cleanup after tornadoes hit midtown Tulsa on Sunday morning.

Ahreanna Hytche walks through tornado damage at Highland Plaza to get to work at Schlotzky's Aug. 7, 2017. MIKE SIMONS/Tulsa World

Damage left by a severe storm near 41st and Hudson on Sunday. TOM GILBERT/Tulsa World