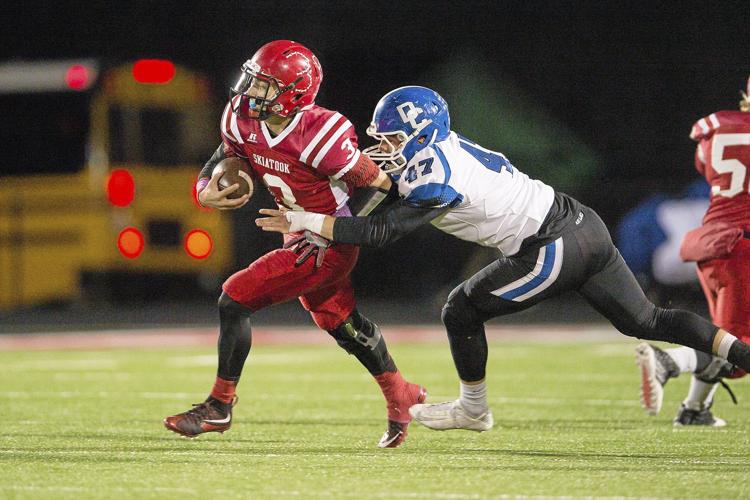 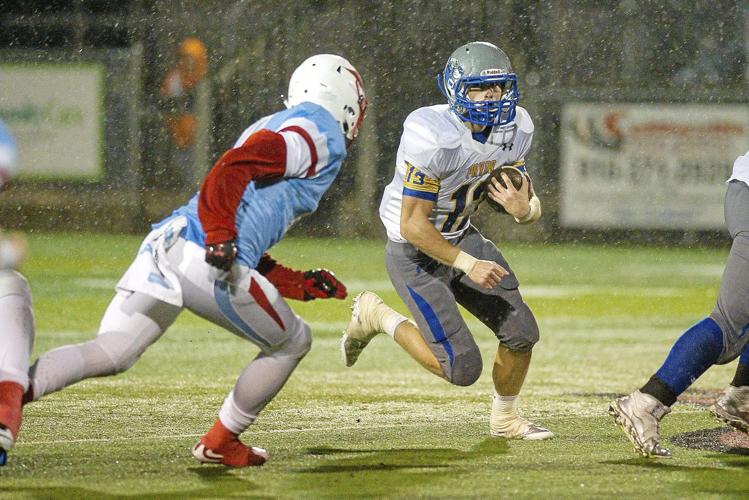 Collinsville’s Levi Draper closes in on Pryor’s Alex Yates during game at Sallee Field in Collinsville, Oklahoma on 10/30/15. BRETT ROJO/For the Tulsa World

The matchup: For the first time, a state championship game berth is the prize for this installment of the Highway 20 rivalry. Skiatook won the regular-season meeting 13-10 on Laben Fisher’s late field goal that was set up a Collinsville special-teams mistake.

A title-game berth would be the second in a row for Skiatook, the state runner-up last year. Collinsville, which last reached the semifinals in 2013, has never reached the state final.

Five of the past seven meetings in the series have been decided by eight points or fewer, and this should be another close, low-scoring game. Second-ranked Skiatook has 5A’s top defense, allowing only 11.6 points per game, and scores 24.5 points. Eighth-ranked Collinsville averages 29.9 points and allows 18.8.

Skiatook has been boosted in the playoffs by the return of Stephen Upton, who was one of the area’s top receiver-defensive backs last season. Upton, who underwent knee surgery in June, made an impact last week as he threw and caught a TD in a 28-25 win over Edmond Deer Creek.

Collinsville’s Levi Draper, an Oklahoma State linebacker commit, has been dominant defensively, but he also is starting to make an impact as a receiver. He has caught a TD in both of the playoff games.

Notable: Before last season, Skiatook had not posted a winning record since 2003. The Bulldogs, who are 24-2 since the start of last season, went 0-10 in 2012. .... Skiatook has won the last two meetings, but Collinsville has won eight of the last 11.

Bill Haisten: For Tucker Barnard and the Pioneers, a perfect experience

Gundy’s son Gage has quarterbacked the Pioneers to the finish line of a perfect season and his school’s first football title since 1967.

With its next football title-game contract, the OSSAA wants a five-year situation

After this weekend’s championship games at UCO, that contract will have expired. For a new contract that would take effect in 2023, the OSSAA’s bid process begins in January.

Bill Haisten: The Bixby machine does it again, adding to its stack of milestones

Kirby accounted for 291 yards and six first-half touchdowns to lead the second-ranked Spartans past No. 4 Owasso before 7,800 fans at Chad Richison Stadium.

The Bulldogs will have an opportunity to win their sixth state championship in 12 years, and the appearance will be the eighth in coach Dale Condict’s tenure at Wagoner.

During Bixby's championship years, head coach Loren Montgomery has had the same coordinators.

As Cushing aims for its first state title in 59 years, Blaze Berlowitz molded by the past: 'I was bred through adversity'

“But, I’ve learned. I’ve grown. Sometimes, you even ask for that adversity because that’s what makes you what you really are. You find out who you really are when you’re tested in times of discomfort," Cushing quarterback Blaze Berlowitz said.

In this week's episode, Barry, Dean and Patrick discuss Owasso's amazing win over Union and what that might mean for the Rams in this week's title game against Bixby. Plus, a preview of other state title games.

Collinsville’s Levi Draper closes in on Pryor’s Alex Yates during game at Sallee Field in Collinsville, Oklahoma on 10/30/15. BRETT ROJO/For the Tulsa World