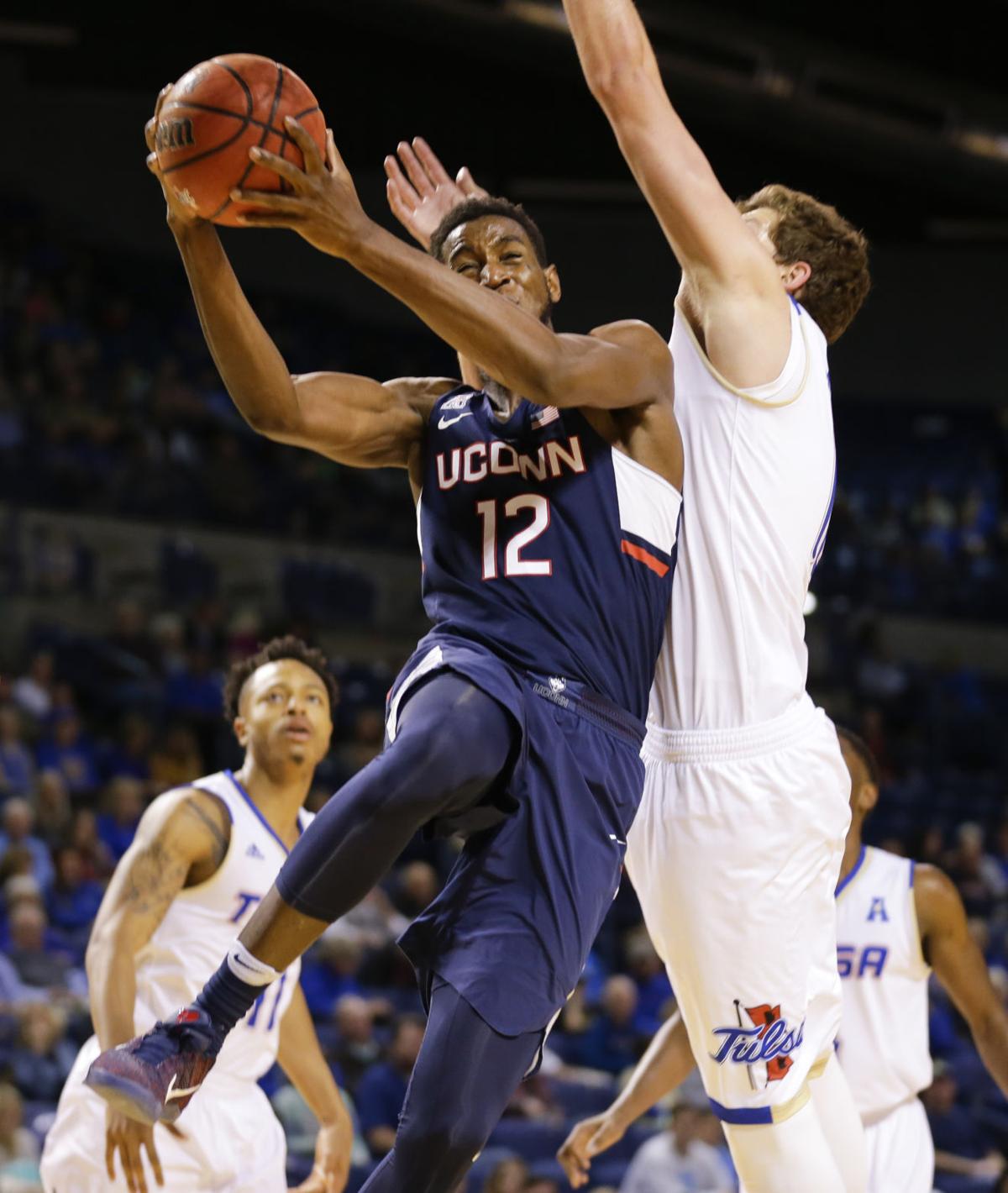 Connecticut’s Kentan Facey tries to shoot over Tulsa’s Will Magnay during the Golden Hurricane’s win Dec. 31. Magnay has started the past eight games. JESSIE WARDARSKI/Tulsa World 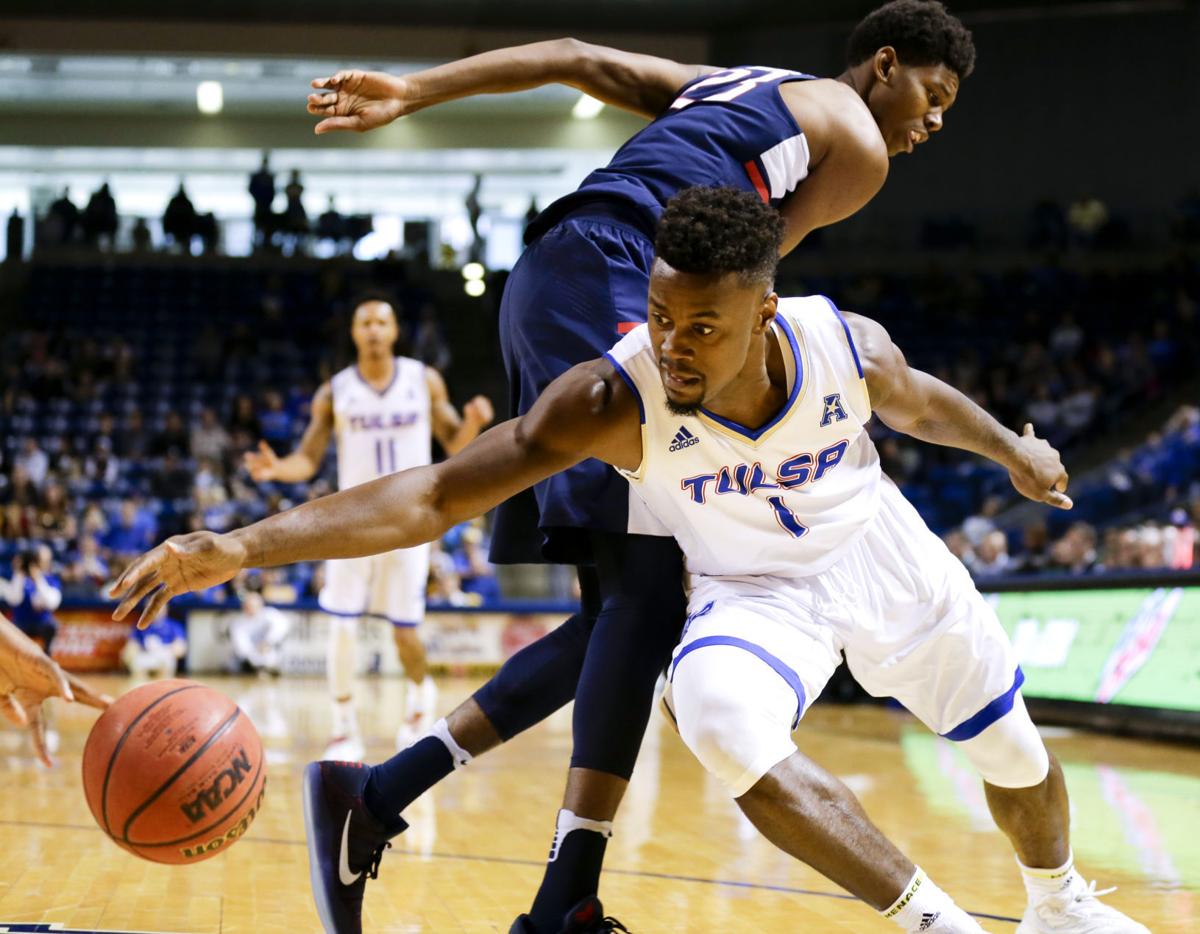 Tulsa freshman Martins Igbanu (right) reaches for a loose ball against UConn on Dec. 31. Igbanu and the Hurricane take on Memphis and Dedric Lawson on Wednesday. JESSIE WARDARSKI/Tulsa World

University of Tulsa freshman forwards Will Magnay and Martins Igbanu have had to grow up in a hurry.

“There’s so much experience and so much those guys will get from playing against the talent we’re playing against,” coach Frank Haith said. “I think both those guys have made great strides as freshmen going up against what they’ve gone against this year. I’m very pleased and encouraged by those guys.”

The assignments don’t get any easier. At 7 p.m. Wednesday, Memphis (12-4, 2-1) visits the Reynolds Center while riding a three-game win streak and boasting the conference preseason co-player of the year in elite forward Dedric Lawson.

Lawson, who likely would be in the NBA if not for a return for his sophomore season, has flourished under Smith and is delivering incredible stats comparable to those of top draft pick Ben Simmons at LSU last year: 20.4 points, 11.1 rebounds and 3.9 assists per game.

Magnay, the Hurricane’s tallest player at 6-10 and a defensive asset who has started the past eight games, will be the primary player tasked with defending Lawson. The 6-foot-8, 240-pound Igbanu backs up Magnay, bringing an intense level of physicality off the bench.

“Just being alert is the biggest thing for us,” Magnay said. “We watched SMU in their game against Memphis and (the Mustangs’) big men did a good job of eliminating his catches and making it uncomfortable for him with where he wanted to go on the court.

“Really, that’s going to be the biggest part of the game. … I think it’s a great opportunity going up against maybe the best player in the league right now. There are a lot of eyes watching and I think I’m ready for the challenge.”

“There’s no question those guys are going to have bright futures and they are going to be the staple of Tulsa basketball,” Haith said. “They will be here for four years and they will be players this community is going to embrace and love. I really believe that.”

Collins emerged as the top defensive player in college football last year, shining in the biggest moments to elevate his draft stock.

TU will conclude spring practice Tuesday but will first showcase the team with an open scrimmage for fans Saturday at H.A. Chapman Stadium.

Connecticut’s Kentan Facey tries to shoot over Tulsa’s Will Magnay during the Golden Hurricane’s win Dec. 31. Magnay has started the past eight games. JESSIE WARDARSKI/Tulsa World

Tulsa freshman Martins Igbanu (right) reaches for a loose ball against UConn on Dec. 31. Igbanu and the Hurricane take on Memphis and Dedric Lawson on Wednesday. JESSIE WARDARSKI/Tulsa World