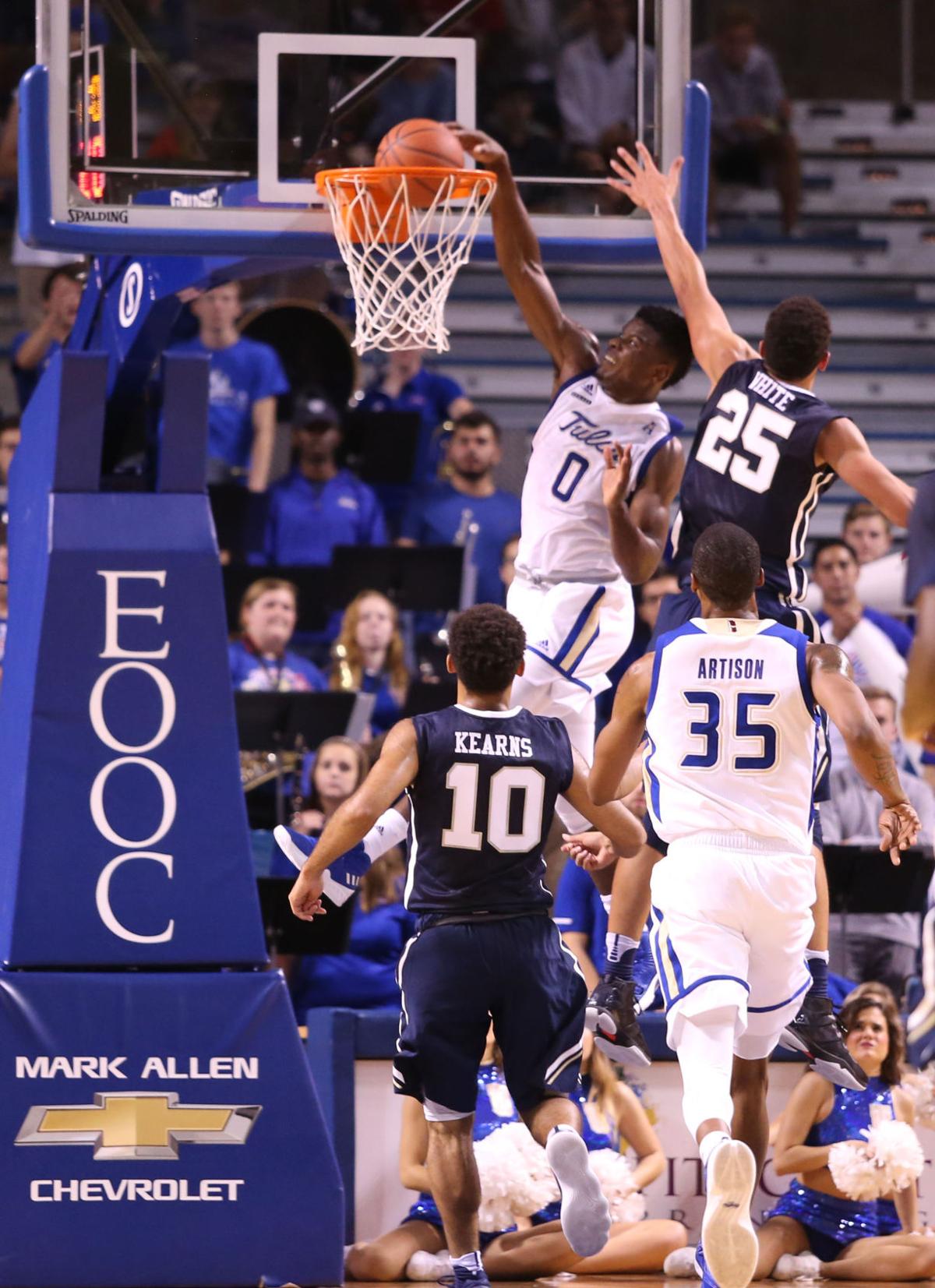 Tulsa’s Junior Etou goes up for a dunk against Oral Roberts during the Hurricane’s win Monday at the Reynolds Center. Etou finished with 30 points, hitting 11 of his 13 shots. JOEY JOHNSON/for the Tulsa World 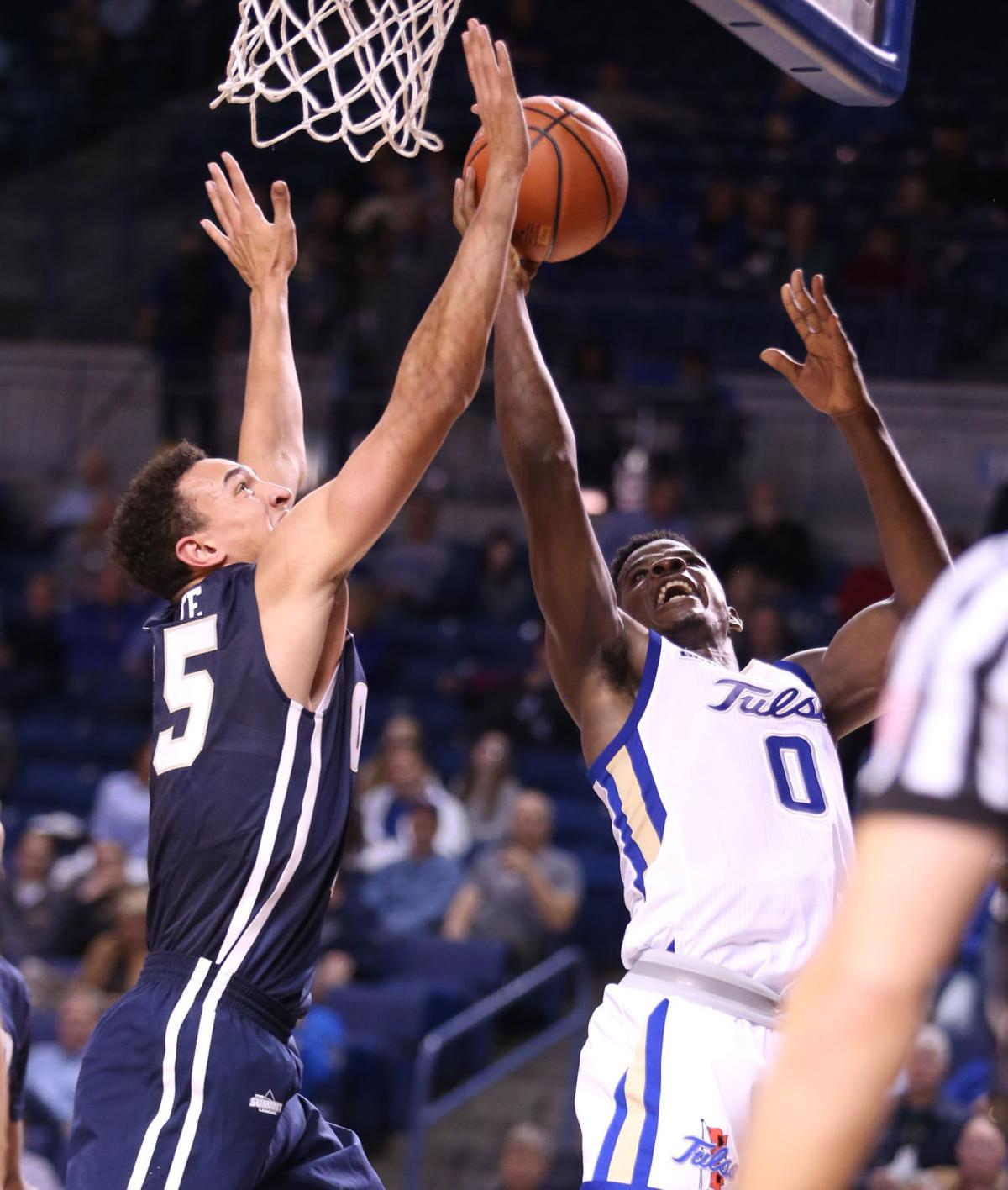 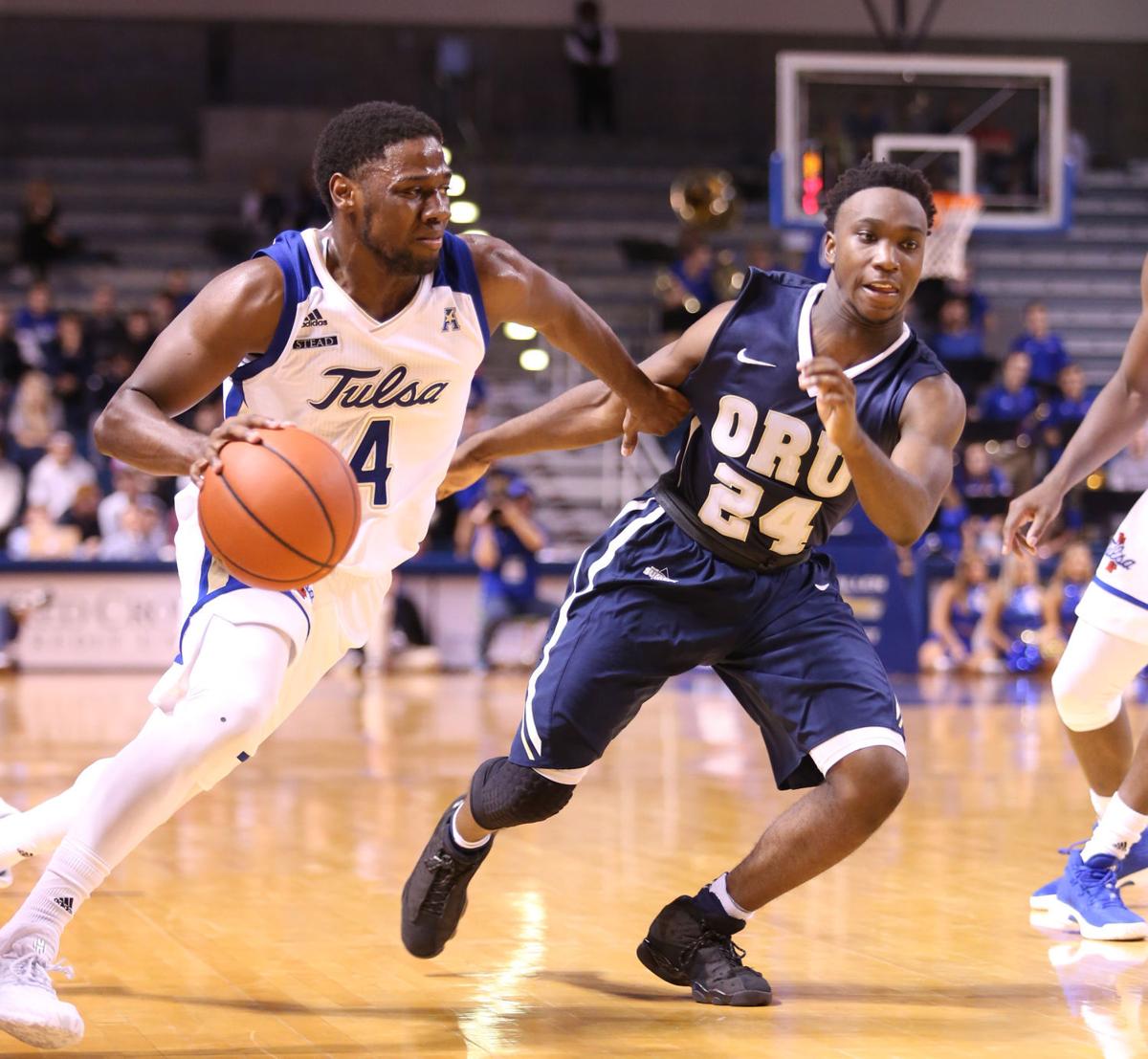 Eight seconds into the second half, the same thing happened.

Etou establishing himself early as a dominant presence set the tone for the University of Tulsa, which secured an easy 90-71 victory against its crosstown rival at the Reynolds Center.

“(Haith) challenged me,” Etou said. “After the first game we lost, he came up to me and talked to me. As a leader of this team, a senior, (he told me to) be aggressive coming out tonight.”

After offensive fouls resulted in an ineffective outing in Friday’s season-opening defeat to Lamar, Etou poured in 30 points on 11-of-13 shooting while also taking Owens out of his game for the majority.

“He did a great job of isolating the post,” first-year ORU coach Paul Mills said. “We had four guys with four fouls, so we have to do a better job of guarding.”

TU, which scored its most points in the Mayor’s Cup series since 2002, used a 9-0 run midway through the first half to build separation. In a brilliant 61-second span, Etou had seven points including a steal and a dunk to put the Hurricane up 16 late in the first half.

“We want him to touch it all over the court, not just in the paint, but off the block, making 3s, driving it and obviously scored on the post-up,” Haith said. “Junior is capable of scoring at all three levels.”

The cushion reached 20 points when Sterling Taplin found DaQuan Jeffries for an alley-oop on a fast break. When the Golden Eagles got within 66-55 with 10 minutes to go, TU went to Etou for baskets on back-to-back possessions.

The Hurricane shot 60 percent in the second half and finished with a narrow advantage in rebounding, an area of weakness in the first game. Against his former team, Jeffries had 10 points, seven rebounds, three blocks and three assists.

Taplin, TU’s veteran point guard, delivered one of his most complete outings, contributing 17 points — including 13 after halftime along with four rebounds, four assists and three steals.

“He was playing with presence and being a leader out on the court,” Haith said. “He took command and control of the game.”

The Hurricane also received more contributions from its reserves, with Lawson Korita and Geno Artison combining for a dozen points and the bench not allowing a defensive dropoff.

“That is Tulsa basketball,” Taplin said. “We just want to come out and play hard and play defense. We have a lot of offensive weapons, but just playing hard on defense is our main goal.”

TU, which scored its most points in the Mayor’s Cup series since 2002, used a 9-0 run midway through the first half to build separation.

Tulsa’s Junior Etou goes up for a dunk against Oral Roberts during the Hurricane’s win Monday at the Reynolds Center. Etou finished with 30 points, hitting 11 of his 13 shots. JOEY JOHNSON/for the Tulsa World