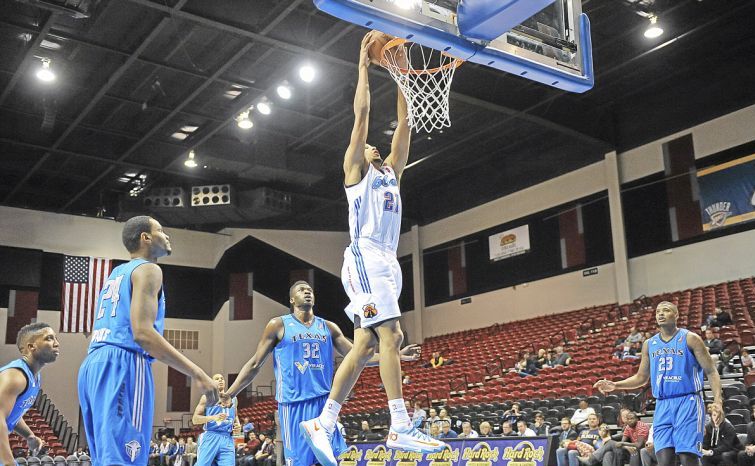 Andre Roberson gets ready to dunk as a host of Texas players look on during a game in December in the near-empty SpiritBank Event Center in Bixby. After the arena announced earlier this year it would no longer book big events, the Thunder announced it would work to find a new home for its NBA Development League team. BRETT ROJO/Tulsa World file 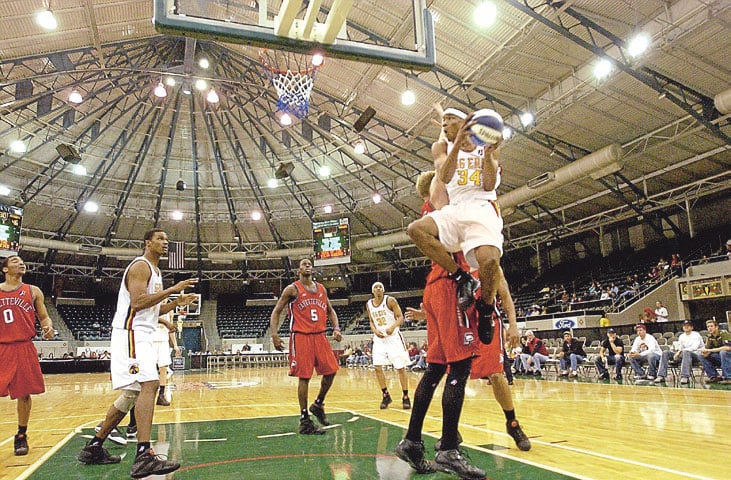 Tulsa in action at the Expo Square Pavilion during the first season. TULSA WORLD FILE PHOTOS 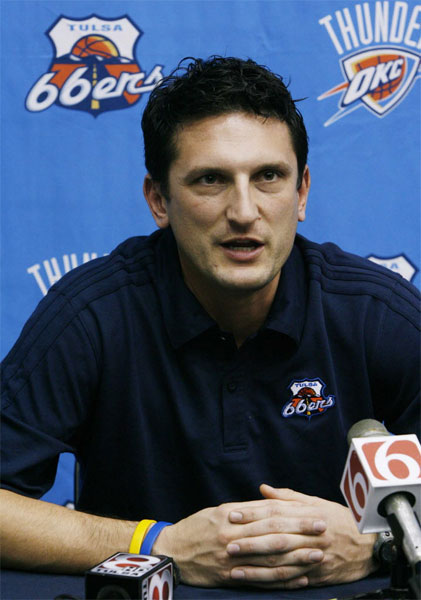 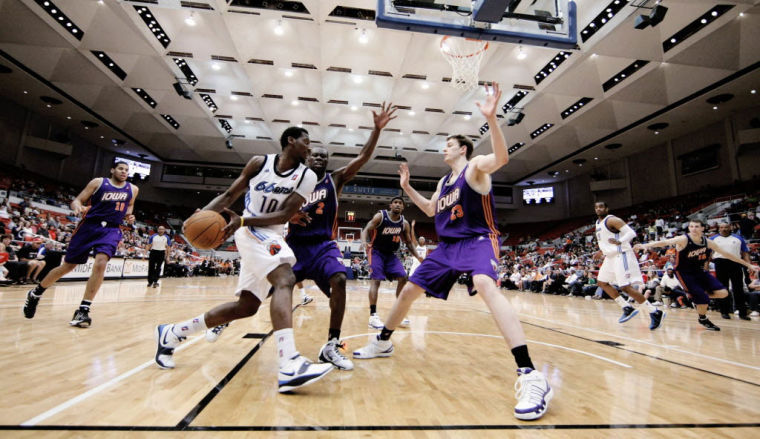 In July, the Tulsa 66ers, an NBADL affiliate of the Oklahoma City Thunder, announce they are relocating to Oklahoma City. CORY YOUNG/Tulsa World file

After nine seasons, the Tulsa 66ers are leaving Tulsa.

The Oklahoma City Thunder will move its minor league basketball team to Oklahoma City for the start of next season, the Thunder announced Friday afternoon.

The 66ers, which have been in the Tulsa area since they were established for the 2005-06 season, most recently played in the SpiritBank Event Center in Bixby. SpiritBank, which owns the arena, recently announced that it would no longer hold major events there.

The Thunder attempted to find another venue in Tulsa but was unsuccessful, according to a press release that announced the move.

“Our two seasons in Bixby were successful, and we were pleased to be there. But circumstances beyond our control made it necessary to look for a new home for our development league team,” Danny Barth, executive vice president and chief administrative officer of the Thunder, said in a statement issued by the team.

The 66ers are owned by the Thunder and play in the D-League, a development league for players trying to rise to the NBA. The Thunder often would assign players to Tulsa and recall them from Tulsa during the season.

The minor-league team’s move to Oklahoma City doesn’t reflect a change in the Thunder’s commitment to Tulsa or northeast Oklahoma, Mahoney said.

“This doesn’t change that at all,” said Dan Mahoney, the Thunder’s vice president for communications and community relations, in a telephone interview. “We had no choice. We would have loved to stay in Bixby.”

Mahoney said Thunder officials have not decided whether the D-League team’s name will be changed.

“We have great support in Tulsa,” Mahoney said. “We know that through TV ratings, through ticket sales, through merchandise sales and through social media following.”

Prior to playing seasons in the SpiritBank Event Center, the 66ers played their home games in Expo Square Pavilion and downtown in what is now known as the Cox Business Center.

“We explored several potentially viable options, but were unable to find a facility in the Tulsa area that meets all of our business and basketball needs, so we made the decision to bring the team to Oklahoma City,” Barth said in the team’s media release. “We offer our sincere thanks to the communities of Tulsa and Bixby, and to all of the 66ers fans and sponsors in the area for their loyal support over the past few years.”

The Cox Business Center (formerly the Tulsa Convention Center), Expo Square Pavilion at the Tulsa Fairgrounds, even the Union Multipurpose Activity Center at Union High School made proposals to host the 66ers.

In June, the SpiritBank Event center publicly announced it would no longer seek events for the 4,500-seat main arena, although it planned to continue booking smaller events within the main part of the center.

The 66ers’ new home could become the Cox Convention Center in downtown Oklahoma City, across the street from the Thunder’s home, Chesapeake Energy Arena.

According to a media release from the Thunder, team officials are in discussions to relocate the team to the Convention Center. The team will train at the Thunder Community Events Center in north Oklahoma City, the Thunder’s original training home.

The 66ers’ first majority owner was David Kahn, who later became director of basketball operations for the Minnesota Timberwolves from 2009-13. In 2008, the Professional Basketball Club, LLC, which owns the Thunder, purchased the 66ers.

The 66ers’ former home has had a tumultuous ownership history. The facility is owned by SpiritBank, which acquired the center in lieu of foreclosing on Remy Cos.’ $28 million debt in 2009.

SpiritBank sold the arena in 2010 to MacPot LLC for $19.25 million. The next year, SpiritBank re-purchased the facility for $19 million.

The NBA’s D-League includes 17 teams from throughout the country. Last season, Tulsa was in a division with Austin, Iowa, Rio Grande Valley, Sioux Falls, and Texas (Frisco).

66ers in Tulsa: A timeline

The franchise is named the 66ers after a name-the-team contest drew about 1,200 submissions.

Tulsa businessman Jono Helmerich is named the team’s president and his group purchases 20 percent of the franchise from Kahn.

The 66ers announce they will move to the new SpiritBank Event Center in Bixby for the 2008-09 season.

The Oklahoma City Thunder announces the purchase of the 66ers and that the Thunder will be the team’s sole affiliate. The 66ers previously had been affiliated with the Milwaukee Bucks and New Orleans/Oklahoma City Hornets.

The 66ers announce they are moving to the Convention Center in downtown Tulsa.

After four non-playoff seasons, the 66ers win two postseason series to reach the D-League finals, where they are swept in two games, losing the finale 94-91 at Rio Grande Valley.

Tulsa is eliminated as it is swept two games in the semifinals by Iowa, losing the finale 107-94. The 66ers, under coach Nate Tibbetts, posted a franchise-best record of 33-17 that included a 14-game winning streak.

Tulsa defeats Canton 100-98 to win a first-round series. The 66ers, who moved back to the SpiritBank Event Center at the start of the season, is then swept by Rio Grande Valley in the semifinals.

The Thunder announce they are moving the 66ers to Oklahoma City.

Andre Roberson gets ready to dunk as a host of Texas players look on during a game in December in the near-empty SpiritBank Event Center in Bixby. After the arena announced earlier this year it would no longer book big events, the Thunder announced it would work to find a new home for its NBA Development League team. BRETT ROJO/Tulsa World file

Tulsa in action at the Expo Square Pavilion during the first season. TULSA WORLD FILE PHOTOS

In July, the Tulsa 66ers, an NBADL affiliate of the Oklahoma City Thunder, announce they are relocating to Oklahoma City. CORY YOUNG/Tulsa World file