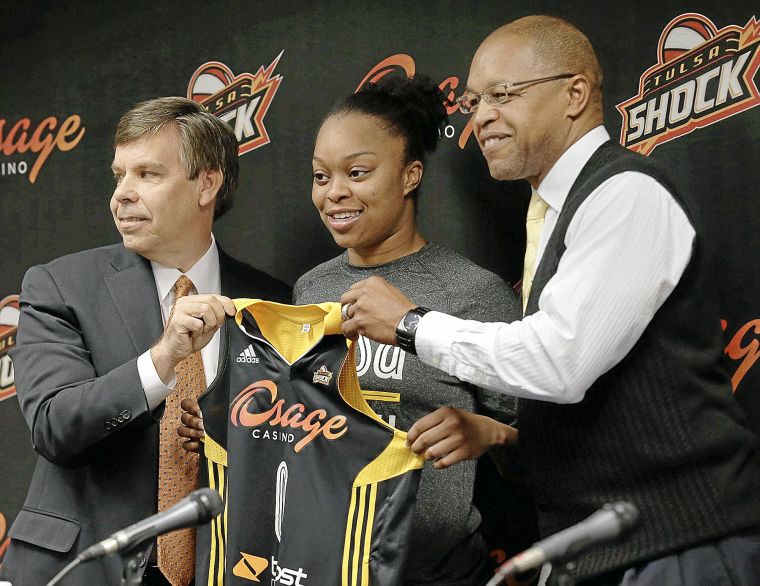 Odyssey Sims (center), the No. 2 overall pick in the 2014 WNBA draft, was introduced at a news conference at the BOK Center on Friday with Shock owner Steve Swetoha (left) and head coach Fred Williams. Sims led Baylor to a 32-5 record this season. MICHAEL WYKE/Tulsa World 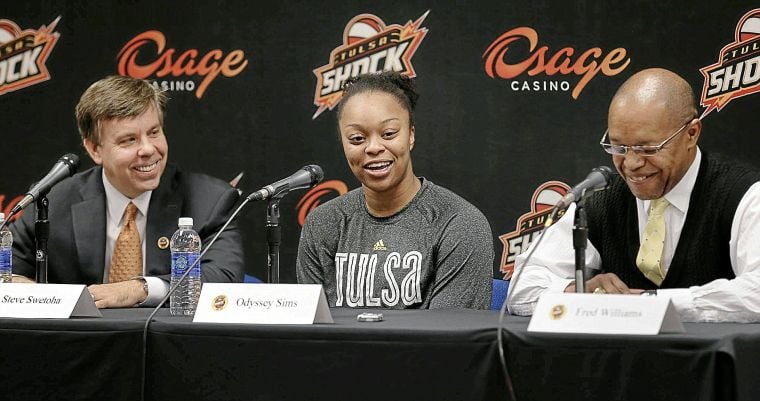 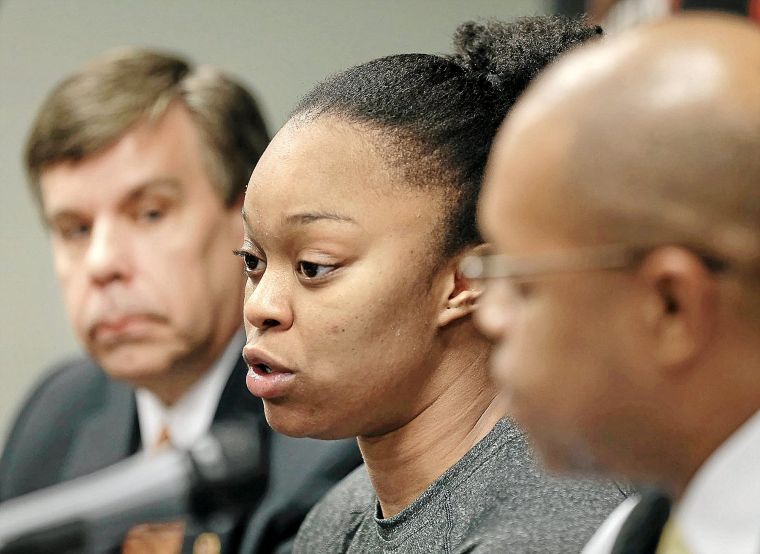 Sims is getting to know Tulsa. MICHAEL WYKE/Tulsa World

Odyssey Sims is learning her lessons as a fledgling professional women's basketball player. She passed her first test in Marketing 101.

The former Baylor standout said she considered changing her jersey number from zero for her first season with the Shock. Later, she thought better of it.

"Everybody calls me '0' and it's just something that represents my name," she said of the single round number. "I was gonna change it when I got here, but people are just starting to get my Baylor stuff with the number on it, so I didn't really want to change it."

The No. 2 overall selection in last week's WNBA draft met the Tulsa media during a Friday news conference at the BOK Center. Sims posed in her new Shock jersey with head coach Fred Williams and team president Steve Swetoha.

"I'm just excited to have this young lady," Williams said by way of introduction. "She's pro-ready, she's a pro guard, and her skills showed that this past season."

After feeding the ball to star center Brittney Griner for three seasons, Sims transitioned from point guard to shooting guard as a senior. She ranked second nationally in scoring (28.5 points per game), leading a young team to a 32-5 record and an NCAA Elite Eight finish.

"She was given the green light to carry her team and I thought she did it in fine fashion and in great spirits," Williams said. "So we're happy to have her here. I felt she was the selection we wanted in that first round."

Sims arrived Thursday and said she's easing into her surroundings.

"I just got situated. I like the apartment, it's pretty nice. I'm kind of liking everything day by day. I worked out (Friday) morning and got a little taste of what to expect. This is my first time being over to the (BOK Center), so I'm liking it."

Her first impression of Tulsa: "It's OK. Coming from Waco (Texas, where Baylor is located), Waco's dead. So I think Tulsa's a little better."

Shock fans are excited about the prospect of Sims and Skylar Diggins, last year's first-round draft pick, playing in the same backcourt. They met four times in college, with Baylor winning all four over Diggins' Notre Dame Fightin' Irish, including 80-61 in the 2012 NCAA final.

"I think you're gonna see two great competitors," Sims said of the pairing. "Every time we played against each other, we always competed. We never took anything off the court against each other. Skylar likes to win. She hates to lose. I do, as well. I don't take losing nicely. And I think if we can put that together, as far as working together and playing hard, it'll be fun."

Williams said both can play the point or shooting guard and should complement one another.

"If you have both of those players on the floor at the same time, it's really hard to slack off of one (or the other) because they both can shoot the outside shot," he said.

He also likes the flexibility of a backcourt that also includes Riquna Williams, the WNBA's 2013 Sixth Woman of the Year, Angel Goodrich and nine-year veteran Roneeka Hodges.

"It gives us a lot of options heading into training camp," he said.

Sims scored 1,054 points last season, second most in women's Division I history, and received the Wade Trophy and Nancy Lieberman Award as the nation's top women's collegian. She finished as Baylor's career leader in assists (641) and 3-pointers (258) and third in points (2,533).

She said she wants to play "wherever Coach needs me, whether it's the point or (shooting guard). Wherever he needs me to help the team, I'm fine with it."

Bob Bowlsby on his relationship with OU's Joe Castiglione, future of Big 12 and more

"Joe has been a longtime colleague and friend, and you know, we will work together because we have to. But friendships are based on trust. And I would say trust is at an all-time low.”

From Australia to Oklahoma: Thunder rookie Josh Giddey glad to be near sister Hannah, who plays for ORU

“We were joking about this before the draft, that we would all be in Oklahoma – and it actually happened,” Josh said.

OSU scored 16 fourth quarter points and outgained the Longhorns 170-1 in the final period to complete a comeback win in Austin.

“I don’t think we ever questioned that we can come through this within the existing framework that we were part of,” TU athletic director Rick Dickson said.

Odyssey Sims (center), the No. 2 overall pick in the 2014 WNBA draft, was introduced at a news conference at the BOK Center on Friday with Shock owner Steve Swetoha (left) and head coach Fred Williams. Sims led Baylor to a 32-5 record this season. MICHAEL WYKE/Tulsa World

Sims is getting to know Tulsa. MICHAEL WYKE/Tulsa World