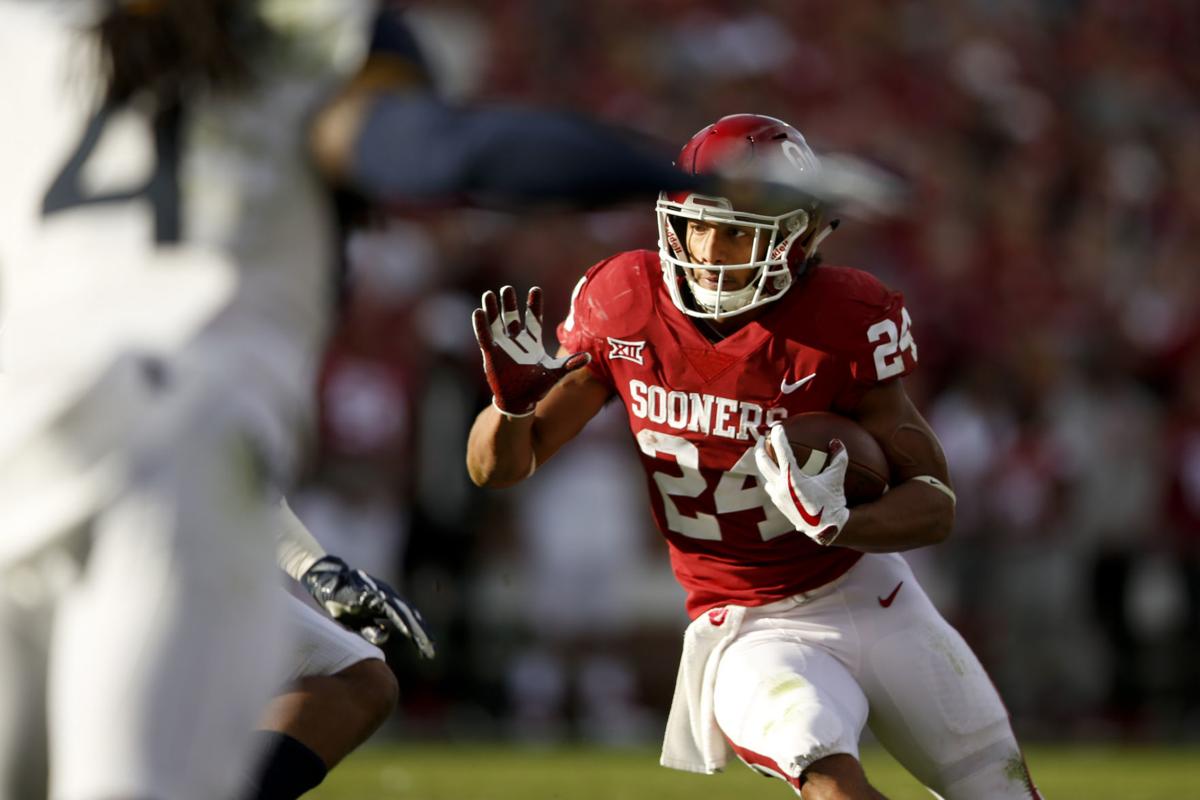 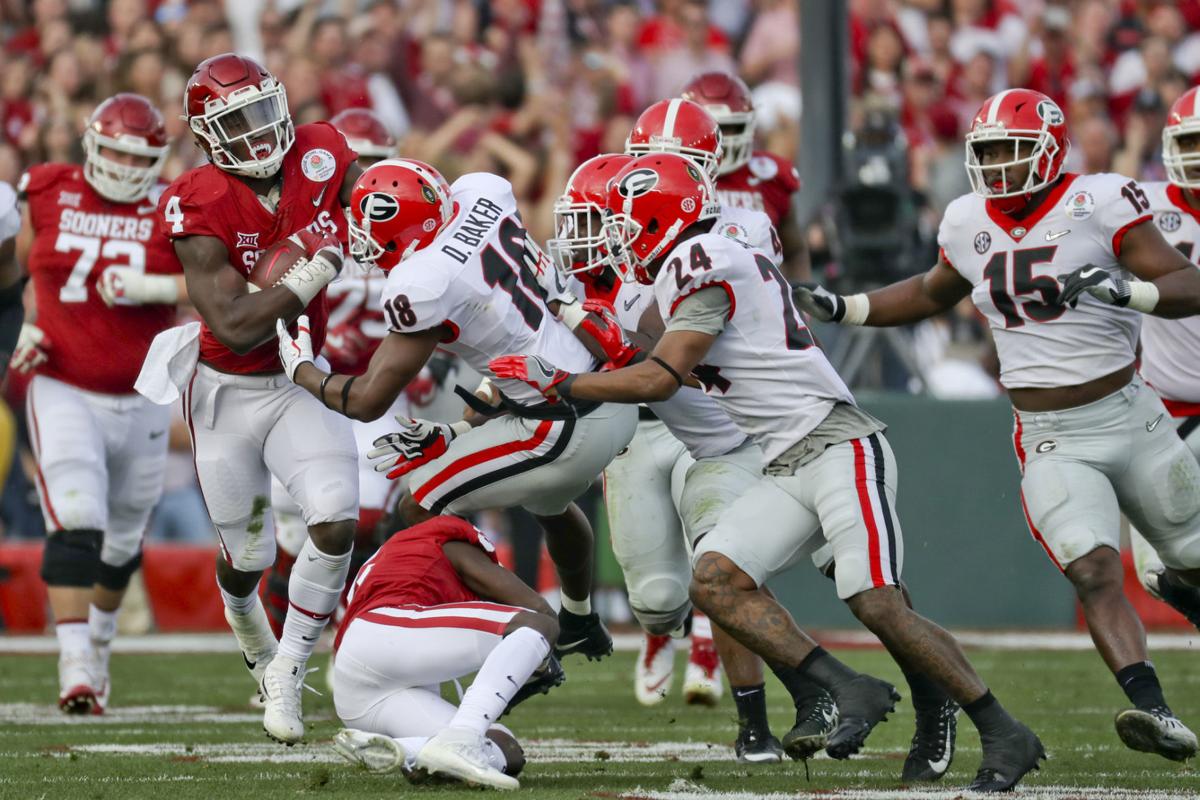 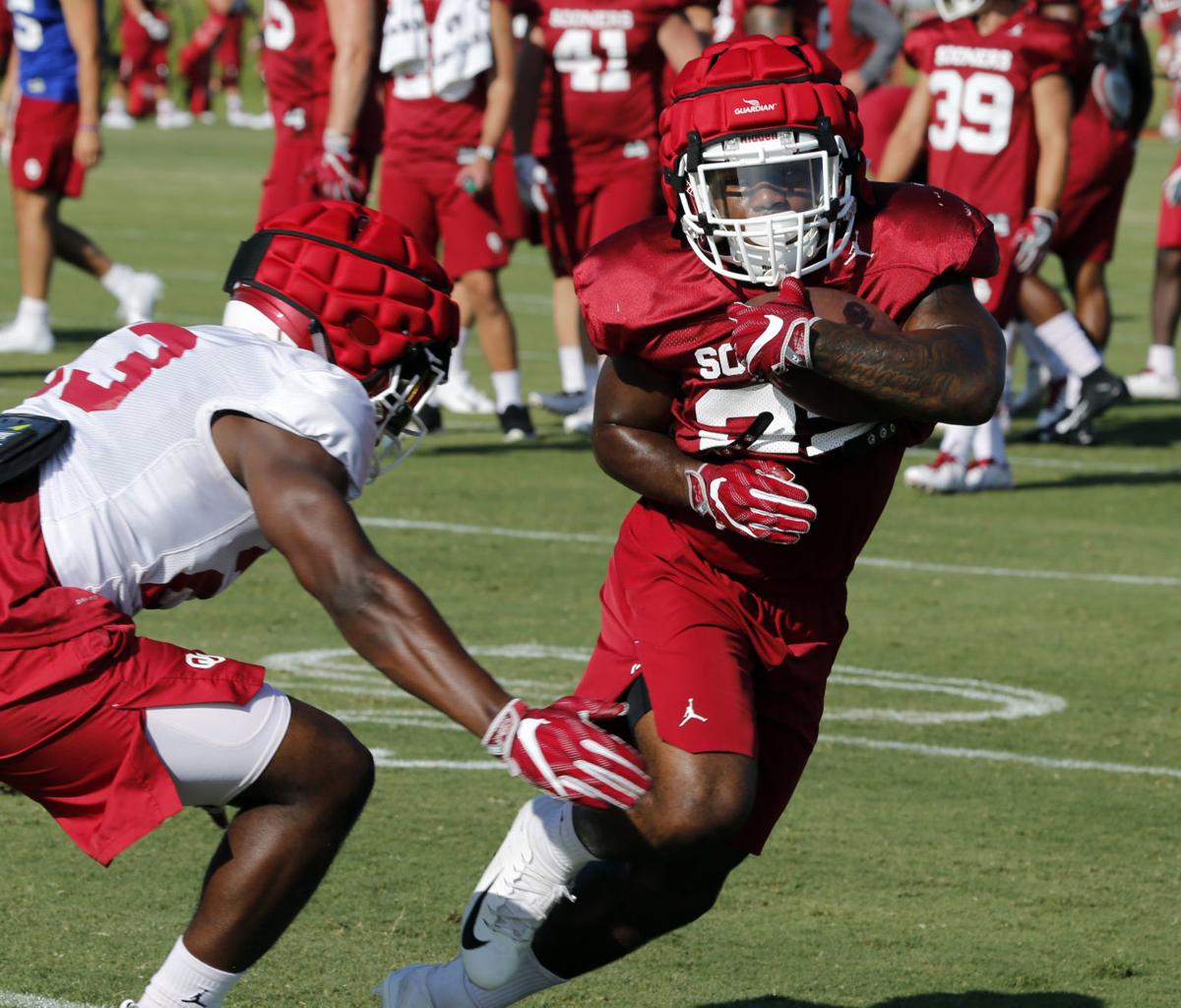 Sooners running back T.J. Pledger runs for extra yardage after a reception during practice in Norman on Aug. 6. Pledger, who arrived on campus over the winter to get a jump-start on his playing career, is “coming along nicely,” said running backs coach Jay Boulware. Steve Sisney/The Oklahoman 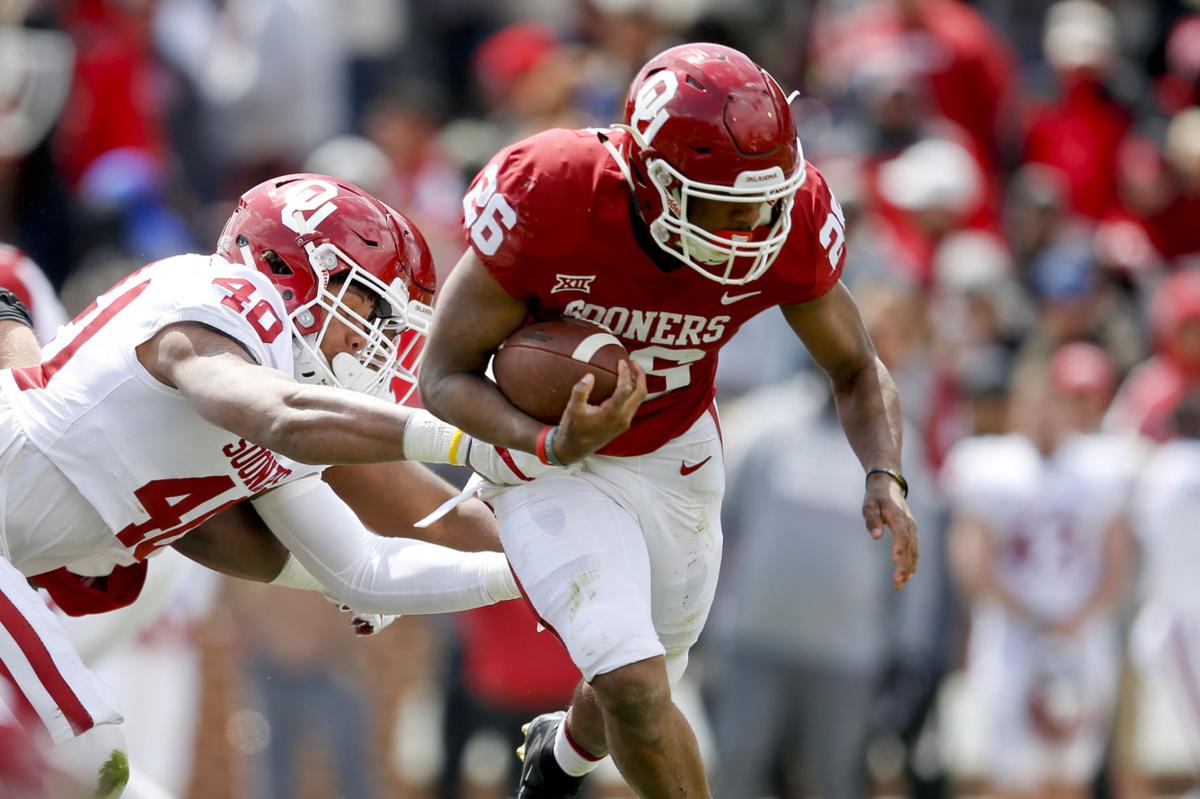 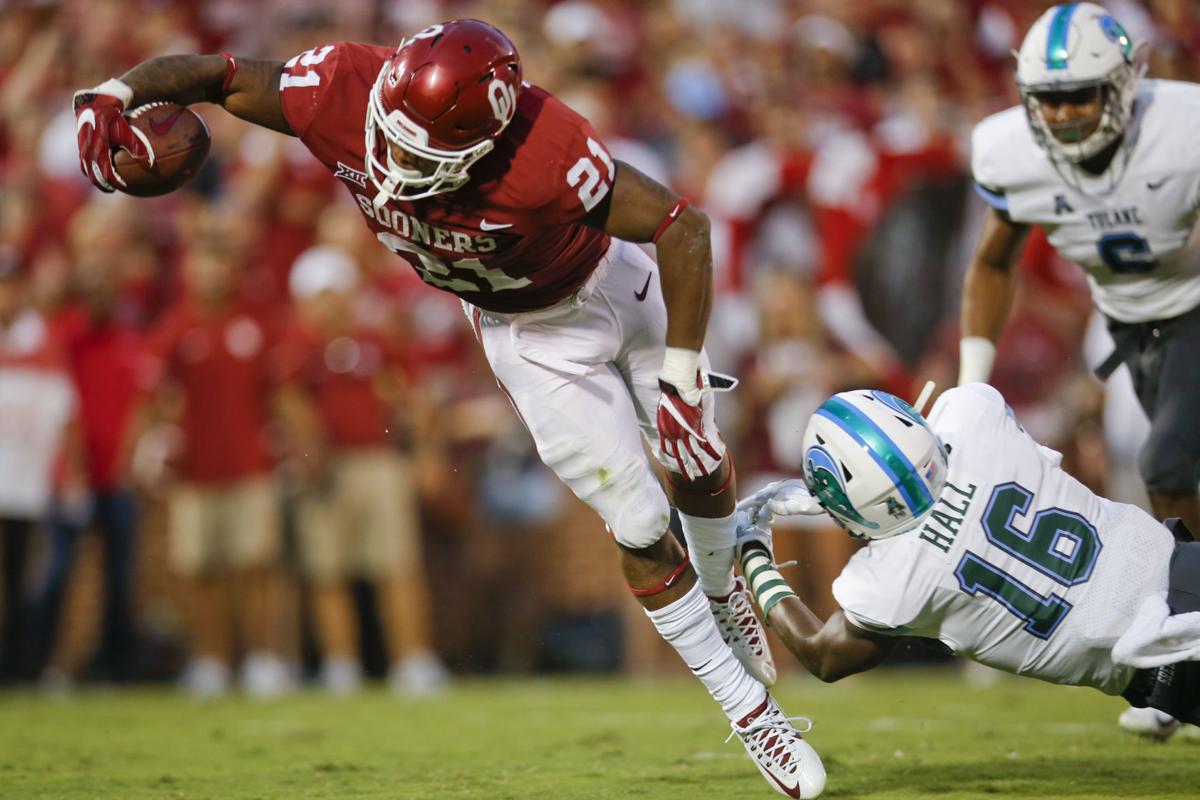 NORMAN — When Lincoln Riley arrived at Oklahoma, the label “Air Raid” followed him after a successful five-year stint as an assistant at East Carolina.

During three years of Riley calling plays for the Sooners, the run game has been prominently featured with three players (Samaje Perine, Joe Mixon, Rodney Anderson) leading the attack.

OU will have a deep running backs room this season, paced by Anderson, who is drawing some Heisman Trophy chatter after last year. Trey Sermon and Marcelias Sutton have game experience, while redshirt freshman Kennedy Brooks and freshman T.J. Pledger will be looking for repetitions.

“I’m very pleased,” running backs coach Jay Boulware said Wednesday after practice. “Most of the guys have been around me for at least a couple of years, and they are starting to understand what we’re asking from them.

“Just our overall offense, what’s going on up front at the point of attacks in the run game, as well as some of the technical things that we’re trying to teach them in pass protection and what not — I’m very pleased with the progress we have made to this point. I’m really curious to see how we develop throughout the course of the rest of the camp and obviously in our first ball game.”

Anderson, a junior, led the Sooners with 1,161 yards rushing last season, with all but 82 coming in the final eight games.

“Every day he’s the guy. He’s the guy who starts us off in warmups and really in the meeting room, he’s always there. He’s like a coach in the meeting room,” Boulware said. “He’s always over at the facility. He sleeps at the facility during the day. He doesn’t go home. He just kind of stays over there. He’s a gym rat. He sets the tone for what everybody else should be like in every way, shape, form or fashion. I’m very pleased with where he is at.”

Sermon played in all 14 games in 2017. He was OU’s second-leading rusher with 744 yards. The highlight of his freshman season may have been his fourth-quarter performance against Baylor when he rushed for 148 yards to help seal the win.

“I’m looking for Trey to be better than he was last year. He wasn’t a finished product by any shape, form or fashion. I want him to be just more sound. … I want him to be a better runner. Quicker, faster, more agile,” Boulware said. “Being able to finish his runs better, which he is all that right now, but being able to put it on the field is a different thing. I want to see all those things that I didn’t see last year; I want to see it show up this season.”

Sutton’s contribution was primarily on kickoff returns last season, but he did carry the ball 22 times for 130 yards. The senior transfer from Lackawanna (Pennsylvania) College is looking forward to a strong finish to his OU career.

“Probably the most, out of all the guys we have coming back, he’s probably the most improved. Not just on the field, but off the field, as well,” Boulware said. “There’s so much that goes into these guys being productive players for us. It’s a trust factor off the field. It’s a trust factor on the field. It’s being able to do things and count on people and that’s where he’s really grown and matured a bunch. I really like where he’s at as a football player. I really think he’s going to help us out a lot this fall.”

Brooks missed the 2017 season following preseason shoulder surgery. He was a dynamic high school player who showed sparks in the spring game.

“We had a big scrimmage the other day (Monday) and he was probably our most productive back. He did a good job and he’s continued to do a good job,” Boulware said. “His problem — and with anybody who has no playing experience — is his overall assignments and making sure you are sound with that. We don’t make very many mistakes, at least we haven’t the last three years that coach Riley has been here.

“That’s kind of our expectation in our room — you don’t make mistakes, MAs, missed assignments, that type of stuff. You know what you are doing on every single play. Of course, they know what they are doing on the run plays. But I’m talking pass routes and pass pickups. It’s key, too.”

It’s a learning curve that’s being taken in by Pledger, who arrived on campus over the winter to get a jump-start on his playing career.

“He’s out (playing) this fall and he understands things better. It’s not just completely foreign to him now,” Boulware said. “He’s getting better and working on his pad level, which is something you think in some of the shorter guys that ‘he doesn’t need to change his pad level, he’s already short enough,’ but he does. He was running straight up and down for most of the spring, but he’s starting to get himself down and finish runs. He’s doing a good job and coming along nicely.”

Sooners running back T.J. Pledger runs for extra yardage after a reception during practice in Norman on Aug. 6. Pledger, who arrived on campus over the winter to get a jump-start on his playing career, is “coming along nicely,” said running backs coach Jay Boulware. Steve Sisney/The Oklahoman