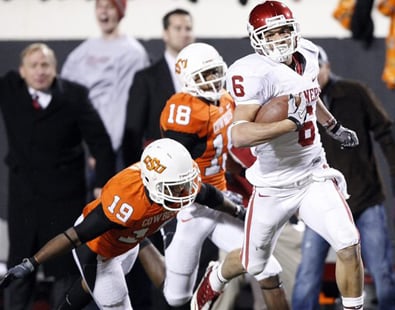 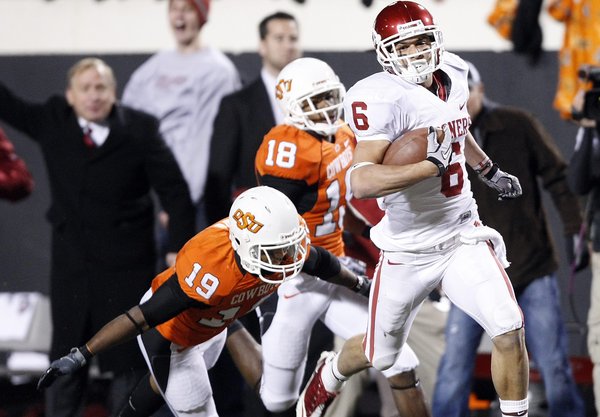 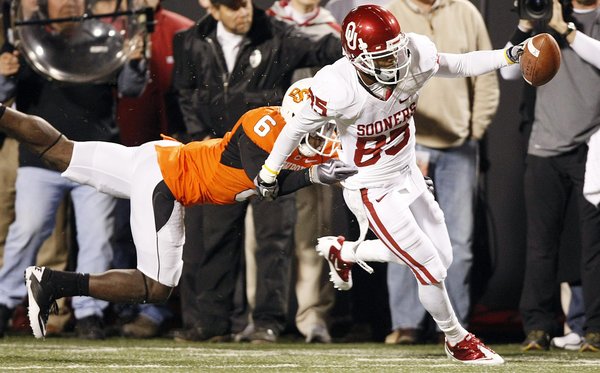 OU restores the Big 12 order with a tense win.

OU overcomes some past woes.

OU notebook: All over the yard.

Jones and his Oklahoma Sooners are co-champions of the Big 12 South, and in all likelihood are on their way to the Big 12 championship game.

Jones, who has struggled in road games, who at times has been awful in the fourth quarter, overcame three first-half interceptions and bombed Oklahoma State 47-41 on Saturday night at Boone Pickens Stadium.

Jones completed 37-of-62 and tied Sam Bradford's school record with 468 yards passing as the Sooners beat the Cowboys for the eighth year in a row and won their eighth South Division championship with a wild fourth quarter.

Jones connected with Cameron Kenney on an 86-yard touchdown on third-and-12 to give the Sooners a nine-point cushion with 3:03 to play. And after Oklahoma State's Justin Gilbert returned the ensuing kickoff 89 yards for a touchdown, Jones found James Hanna behind the OSU secondary for a 76-yard touchdown strike that restored OU's nine-point advantage.

"I was so pleased at how we performed offensively and made big plays in the fourth quarter when we had to have them," Stoops said.

The Boone Pickens Stadium crowd of 51,164 was stunned as the fourth quarter unfolded, turning a 24-24 tie into a final-period, 23-17 shootout. As OSU fans filed out looking exhausted and empty, a couple pockets of Sooner fans stayed long afterward to cheer their team into the chilly night.

And now Jones' career comes full circle. If Sunday night's Bowl Championship Series standings shake out as expected, the Sooners will return to Cowboys Stadium in Arlington, Texas, where Jones' Sooner career began prematurely (the 2009 season-opener, when he unsuccessfully replaced Bradford) and against the team that force-fed him his worst performance (a five-interception effort last year at Nebraska, the repeat North Division champion).

It wasn't all good news for OU. Running back DeMarco Murray, who carried the offense in the first half and finished with 80 yards rushing and 40 receiving, went out with a knee injury.

OU finished with 588 total yards (converting 16-of-27 third-down plays) and utilized a confusing, morphing defensive alignment to hold the nation's most prolific offense to just 379, nearly a season-low and 173 yards below its season average.

"We got in a little bit of an odd front, more than we ever have," Stoops said. "It worked out well for us."

So did the coaching staff's belief in Jones. He went 7-of-13 for 203 yards in the fourth quarter, with the last two throws being the biggest of his life.

Kenney finished with 141 yards on six catches, and Hannah had 130 on four, both career-highs.

"I told him he was the biggest difference in the game, making all his kicks the way he did," Stoops said. "I'm really proud of Jimmy to have hung in through the year the way he has."

Stevens finished 17- and 15-play drives with short field goals early in the fourth quarter, then extended the lead to nine with his fourth kick after a game-changing turnover.

OSU quarterback Brandon Weeden's third interception of the night was caused when defensive end Ronnell Lewis rushed in from the outside and jumped to deflect Weeden's short pass. Linebacker Austin Box made a diving interception at the OSU 18, and four plays later Stevens put the Sooners ahead 33-24 with 5:53 to play.

The Cowboys responded immediately when Weeden zipped a 15-yard touchdown pass to Justin Blackmon to make it 33-31 with 4:06 left, setting up the furious finish.

Here is an explanation of the buttons on the player above.

To see each slide

To see all of the Tulsa World slide shows, go to tulsaworld.com/photos.

OU, OSU and Texas A&M are tied on top of the Big 12 South with 6-2 conference records. The tiebreaker will come down to what is considered the fifth tiebreaker by Big 12 rules, which takes into account BCS standings (OSU entered Saturday ranked No. 9, OU No. 13 and A&M No. 17). The rule reads as follows:

More information: Ticket availability and corresponding charges are dependent on OU advancing to the championship game. If tickets remain, phone sales will be available from noon to 2 p.m. Sunday through the OU ticket office. Tickets purchased will be express mailed.