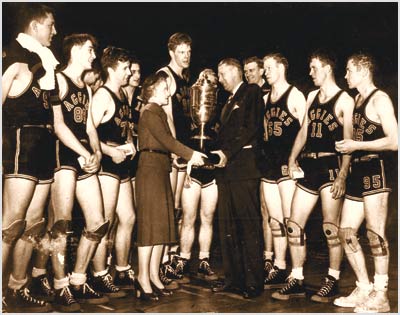 The national title trophy is presented to coach Henry Iba, star Bob Kurland (center) and the rest of the 1946 Cowboy basketball team. 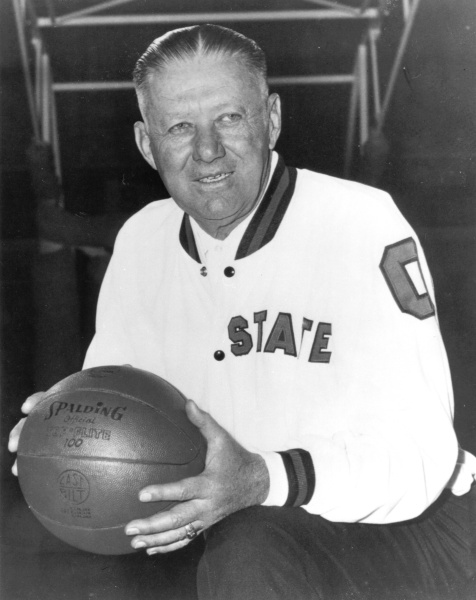 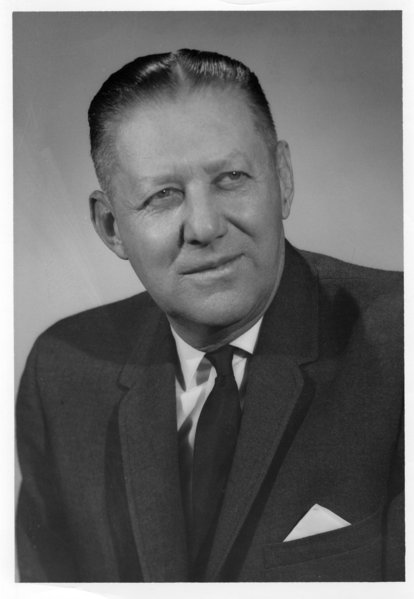 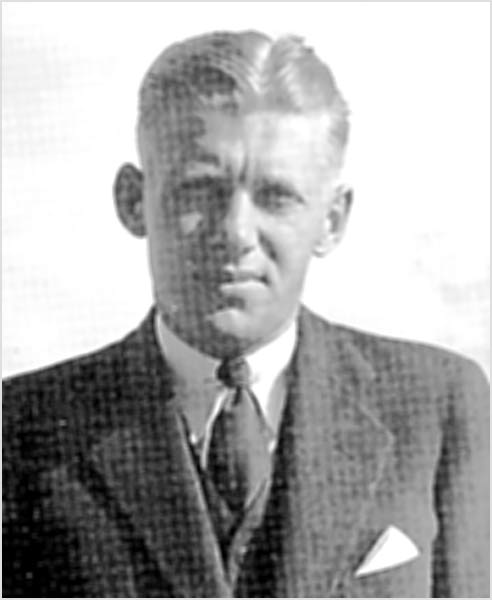 From Tobacco Road to Bloomington, Ind., from Los Angeles to the U.S. Senate, the old lions and the new lions of basketball said much the same thing while Henry Iba was alive.

Whether Mr. Iba coached them at Oklahoma State or in the Olympics or counseled them at clinics or at his home in retirement, they knew him as John Wooden described him: "Basketball's greatest friend and finest gentleman."

If Mr. Iba could hear the tributes, he would surely say, "Cut that foolishness out." Those are the words he used countless times to erring players and to those who praised him in public.

Mr. Iba never talked about his accomplishments. Never. He did not talk much about the past or how he became known as the high priest of defense. Even in his 23 years of retirement, he was preoccupied with today and his proteges' next games, not his national championships, not the past. He did not seek the spotlight but he could not avoid it; he was too successful, too influential, too innovative, too involved in landmark events.

Mr. Iba was no saint. He was a salty man's man who liked Scotch in moderation and had a wonderful wit that cracked up audiences of cronies on fishing trips or associates on plane flights or players during pregame talks.

He was a tough soul. They did not call him the Iron Duke for nothing. He was the quintessential taskmaster whose passion for discipline had no limit. He could deliver the most searing of tongue lashings during four-hour practices and burn the ears of a referee with whom he disagreed. His booming voice added to his intimidating presence.

But, when a game ended, his game face was put away and the ferocious rival was once again a friend who took legendary opponents like Ray Meyer and Clair Bee to dinner. He was so fair, so supportive, as quick to praise players as he was to reprimand them that he was held with ultimate respect and affection.

There was never a hint of scandal about him in his professional or personal life. Except in the most casual of situations, he always wore a coat and tie in public. His conduct in mixed company was exemplary. His unflagging spirit and concern for others made you feel better for merely being in his presence.

He always ended every telephone conversation by saying, "Thank you for calling." He never seemed to grasp that it was the callers who should have offered thanks.

But Mr. Iba did one awful thing: he succeeded in making us think for the longest time that he was not special. Hence, we expect other coaching giants to walk on the same unsullied pedestal and were disappointed when they did not. That was unfair to them. There was only one Henry Payne Iba.

How did he rank as a coach? Coaching giants who competed against him and observed him were as captivated as those with subjective roots to Iba's coaching tree. A favorite assessment of Iba came in a 1991 letter from Duke's Mike Krzyzewski, who said:

"Coach Iba, in my estimation, is the greatest coach in the history of the game of basketball. He epitomizes what a coach must do on and off the court, and the manner in which it should be done. Everything he did and continues to do, from the way he handled people to the way he dressed, was an example of how things should be done on this level."

In a guest column in 1987, Bob Knight said he considered Iba to be among the "four or five coaches who made great innovative contributions to basketball. Mr. Iba did it before there was anyone for him to copy. He was the first to run the motion offense. He was the first to incorporate the 'help' principles of zone defenses with man-to-man defense. He opened up the game for the big man."

U.S. Sen. Bill Bradley of New Jersey, who was a member of the 1964 U.S. Olympic team that Iba coached to a gold medal in Tokyo, said in a letter to the coach:

"... more inspiring and more important to me than the basketball instruction were the hints on how to live a more worthwhile life, which were sprinkled throughout practice sessions, team meetings and casual remarks. Now I understand why men are always proud when they say, 'Mr. Iba was my coach.' So am I."

What endeared Iba to his players was the countless favors he did on their behalf after their eligibility was completed. Whether it was Bob Kurland, superstar of his 1945 and '46 national champions, or the lowliest reserve on one of the losing teams that marred his final years, Iba treated them like sons.

Iba transcended the coaching box. When OSU honored him with a distinguished service award, Mickey Holmes, executive director of the Sugar Bowl who formerly worked in the Big Eight Conference office, captured the essence of the day when he said, "An institution is honoring its institution."

Here are comments from coaches and colleagues on Henry Iba,

STILLWATER - Don Haskins skipped a trip to Hawaii with his team to be in Stillwater on a bitterly cold Monday. Mike Krzyzewski came from Duke …

The national title trophy is presented to coach Henry Iba, star Bob Kurland (center) and the rest of the 1946 Cowboy basketball team.