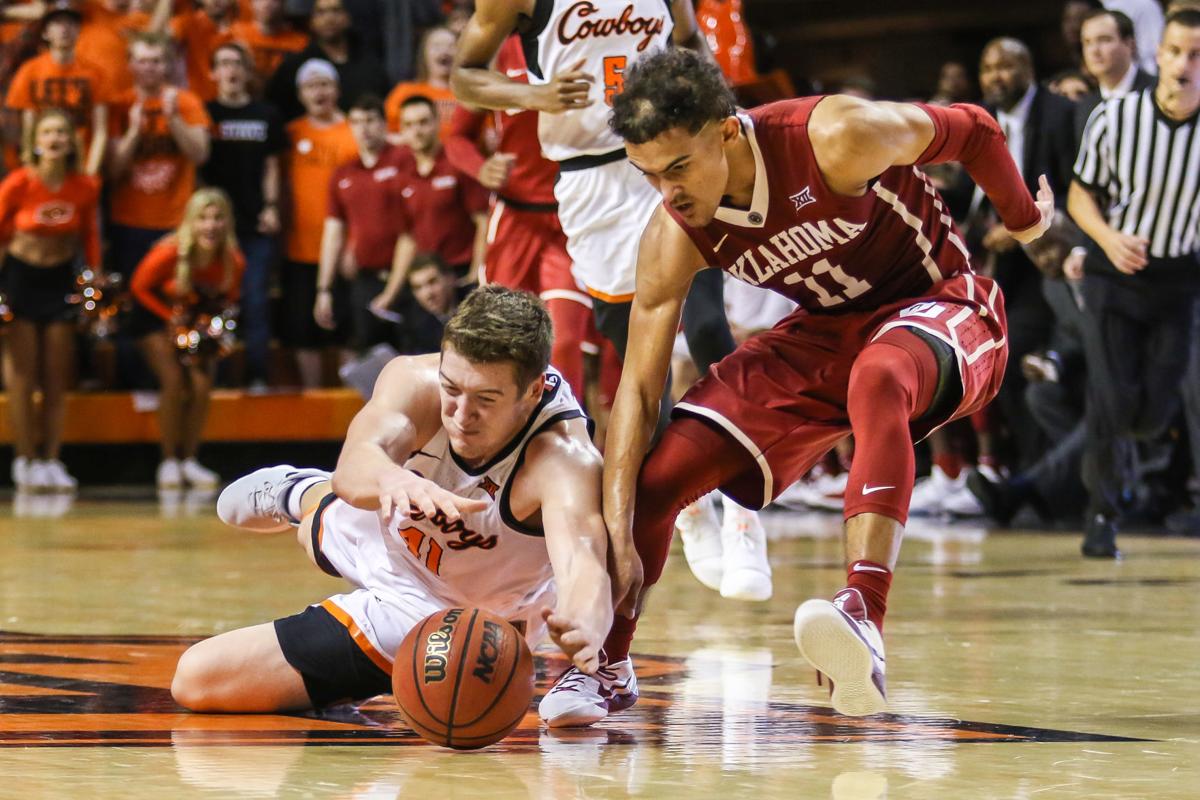 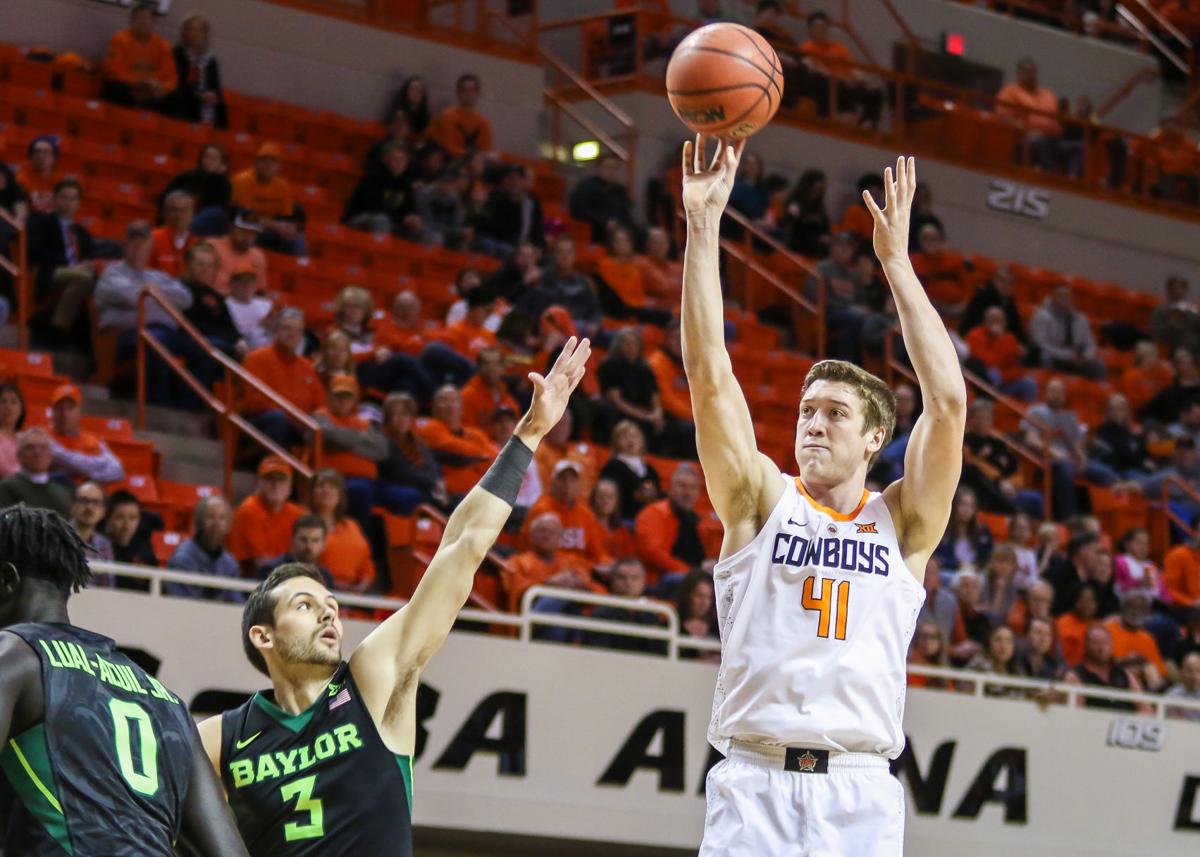 Mitchell Solomon pulls up for a jump shot against Baylor on Feb. 6. Solomon averages 8.1 points and 6.3 rebounds per game, but he has also become a team leader of the Cowboys. Devin Lawrence Wilber/ for the Tulsa World, file

STILLWATER — The road trip to Manhattan, Kansas, on Jan. 10 was particularly miserable for Oklahoma State.

The Cowboys lost a game they had every opportunity to win, falling by four to Kansas State despite a performance coach Mike Boynton referred to as gutless. And at 1-3 in the Big 12 with a home game against Texas next, it marked a moment where it felt like OSU’s season could turn one way or another.

Oklahoma State looked like a team starving for leadership from within to get things right.

That’s when Lindy Waters looked to his roommate, Mitchell Solomon.

“He’s my roommate, so I talked to him about being the enforcer guy,” Waters said. “Because honestly, no one’s going to say anything back to him, because he’s always in the right position. He’s always doing the right thing. … He makes up so much ground for anyone else.”

Waters, a sophomore, told Solomon, the senior, to be loud. He told him no one will talk back to him. The situation was urgent: The roommates, who have grown into close friends, had only 15 games or so left in their careers as teammates. And Waters saw his words register in Solomon’s mind.

This was the last step in the development of Mitchell Solomon, who will proceed onto the Gallagher-Iba Arena white maple on Saturday flanked by family in what will surely be an emotional final regular-season home game against No. 6 Kansas. Development — no word better describes the four-year career of the Bixby native, who will go down as one of the most respected teammates, hardest-working players and top defenders in a tumultuous era of Cowboy basketball.

Solomon will leave OSU as the eighth player in school history to record 500 rebounds, 100 blocks and a career shooting percentage of 50 or better.

But the numbers don’t tell the whole story. Beneath those statistics is a story of hard work — a transformation of a player who averaged a foul every five minutes as a freshman into the player Boynton labeled this season’s most valuable.

“I’m not sure you can anticipate who’s going to be the guy you can lean on in your first year and it became very apparent to me early this summer that he had accountability, dependability, availability. He’s one of the few guys who hasn’t missed any time at all this year,” Boynton said.

Three days after the loss in Manhattan, in a game that could have tilted Oklahoma State’s season toward calamity in the middle of January, the Cowboys trailed Texas by 12 points with 5:55 to go when Solomon … fouled out. If the situation hadn’t looked dire already, his retreat to the bench cast gloom upon OSU’s prospects.

But during a timeout in those final six minutes, Solomon found his voice.

“Mitch had already fouled out and he was just preaching. ‘Who’s going to make the big play? Who’s going to be the guy that necessarily saves the day?’ Waters said.

The Cowboys closed the game on a 15-2 run to win by one, as Waters took a charge late in the final minute before OSU made a game-winning tip-in. Solomon was on the sideline, but his confidence and his words seemed to have an effect on his teammates on the floor.

A week later, as Oklahoma State tried to stave off a then-ranked Oklahoma team in Gallagher-Iba, Solomon led by example.

In the defining moment of an 83-81 overtime win, he outraced Trae Young for a loose ball in the OU backcourt, diving on it and flipping it to Tavarius Shine for a dunk.

His vocal outbursts against Texas were a work in progress, a role that is not natural to Solomon but one that he has practiced this year because he knows the team needs him.

The play against Oklahoma? It’s the type of tireless work Solomon was brought up on.

“I think it comes from my dad, mostly,” Solomon said.

In 2001, Andy Solomon worked to get his business, Challenger Services, off the ground in Tulsa. He sells and rents pipeline equipment, and back then, launching the company meant long days — and nights.

Mitchell Solomon was five years old at the time. Andy Solomon came home from work and the two shot around the driveway until it was time to eat dinner as a family.

But after the kids were tucked into bed around 8 p.m., Andy Solomon had more work to do.

He went back to the shop to paint machines, or he studied for the master’s degree he was pursuing online.

“He’d be at his work until 2-3 in the morning sometimes,” Mitchell Solomon said. “I remember hearing him come in and he’d just be coming home and I’d be like, ‘Man, it’s the middle of the night!’ He’d be up again at 8 to wake me up and send me off to school.”

Those lessons — by example — have stuck with him in all his pursuits, whether it was basketball or his degree in mechanical engineering.

And it’s the work ethic that helped him develop into a force this season. Solomon only averages 8.1 points and 6.3 rebounds per game, but he is second in the Big 12 in offensive rebounding percentage and is one of OSU’s best free throw shooters at 85 percent. As a freshman and sophomore, he shot just 65 percent.

“He’s taken on the leadership role seriously,” Andy Solomon said. “I look at his career and watching games and I’ve talked about him being a thinker, he has directed traffic on the floor since he was a freshman. His knowledge of the game has always been strong, but it’s fun to see some confidence grow through the years. And then just getting stronger, bigger and just improving. That’s been pretty cool.”

At this stage, with at least two games — he’s hoping for many more — left in his career, Mitchell Solomon’s confidence has peaked.

Now, the only question left is if he can fuse it with his teammates as the Cowboys (17-13, 7-10 Big 12) pursue a third NCAA Tournament berth in his four years.

Said Waters: “He’s the most encouraging teammate that I’ve ever had.”

No. 6 Kansas at Oklahoma State

The Cowboys host No. 6 KU

Mitchell Solomon pulls up for a jump shot against Baylor on Feb. 6. Solomon averages 8.1 points and 6.3 rebounds per game, but he has also become a team leader of the Cowboys. Devin Lawrence Wilber/ for the Tulsa World, file