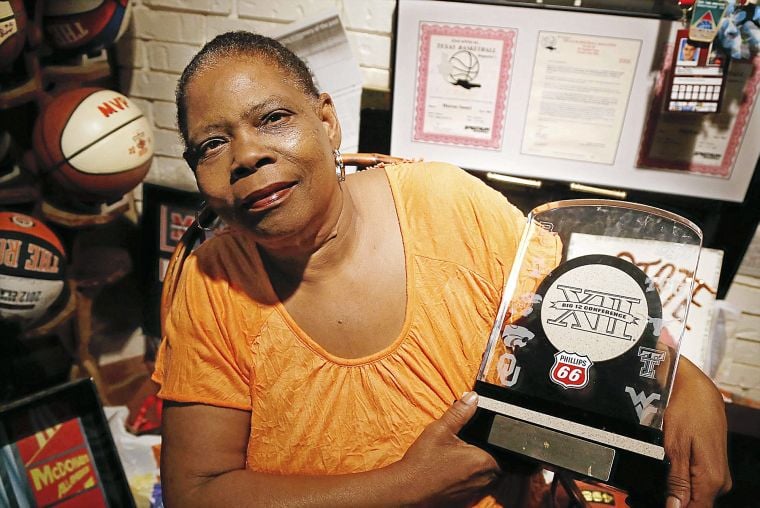 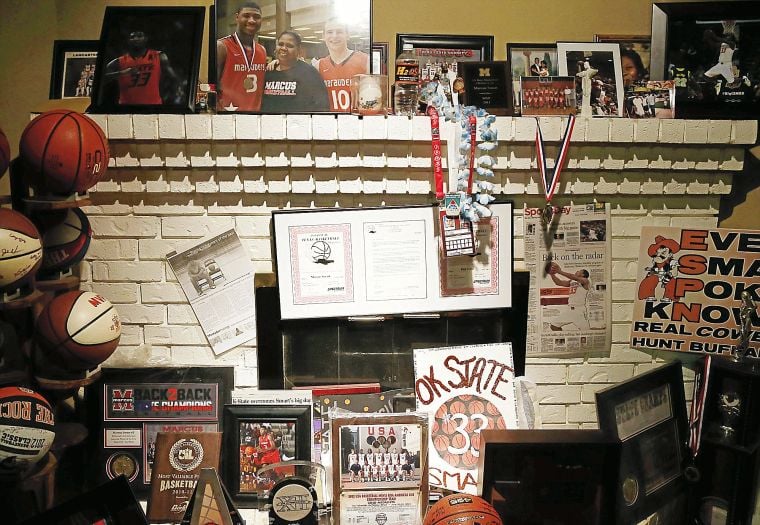 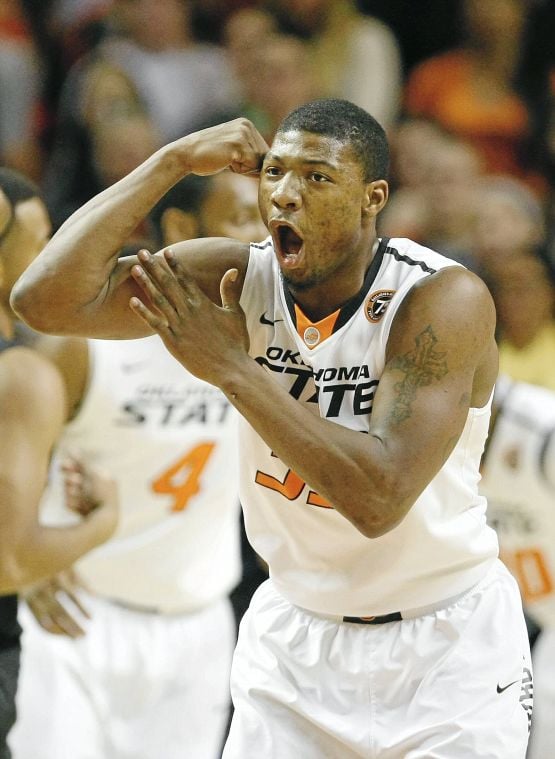 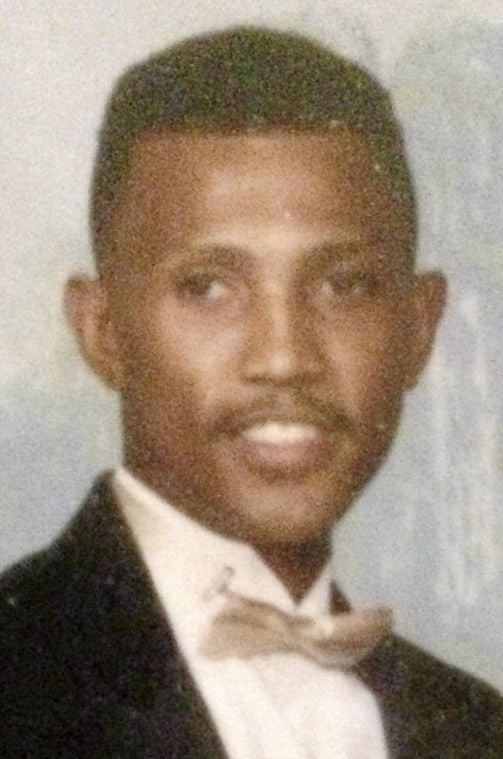 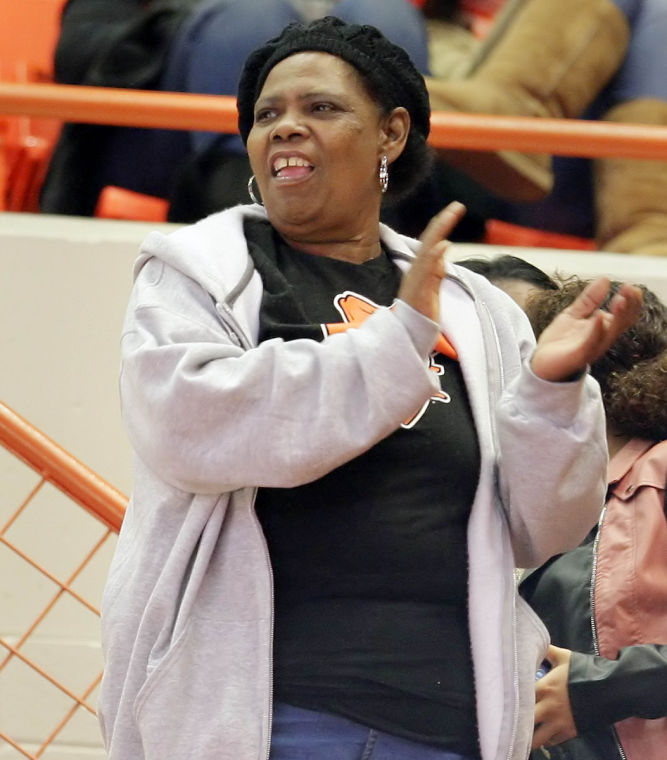 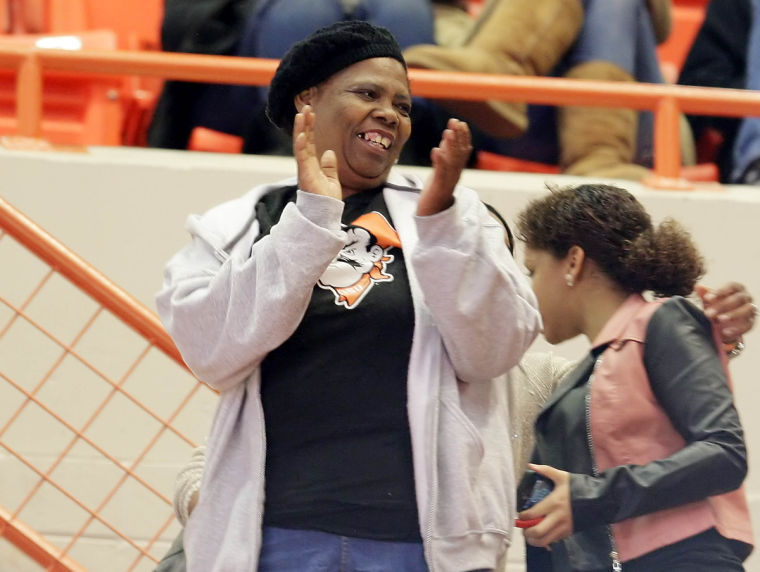 ???, mother of Oklahoma State's Marcus Smart cheers from up high in the stands during their game against Delaware State in Stillwater, OK, Dec. 17, 2013. MICHAEL WYKE/Tulsa World 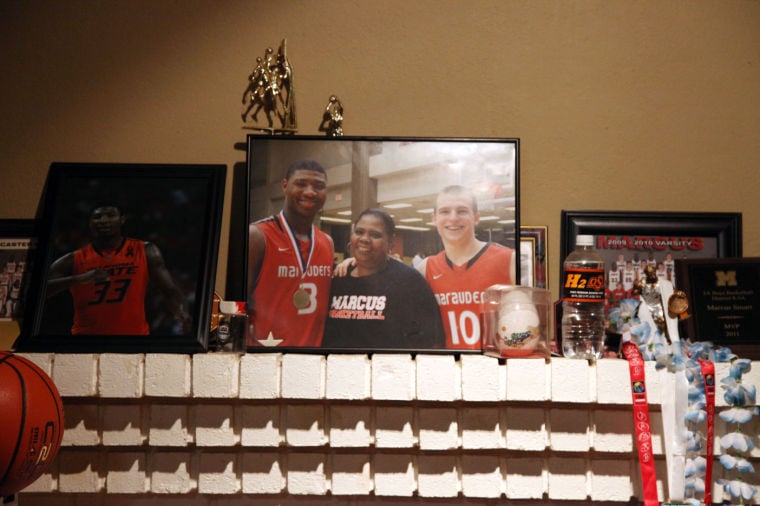 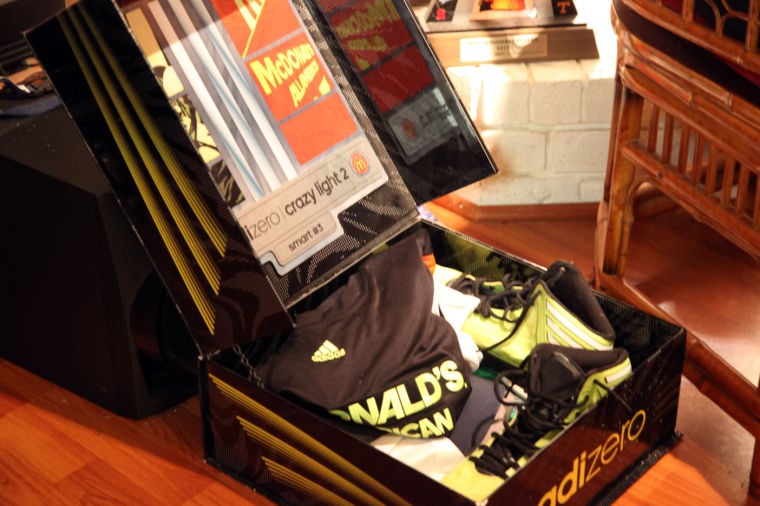 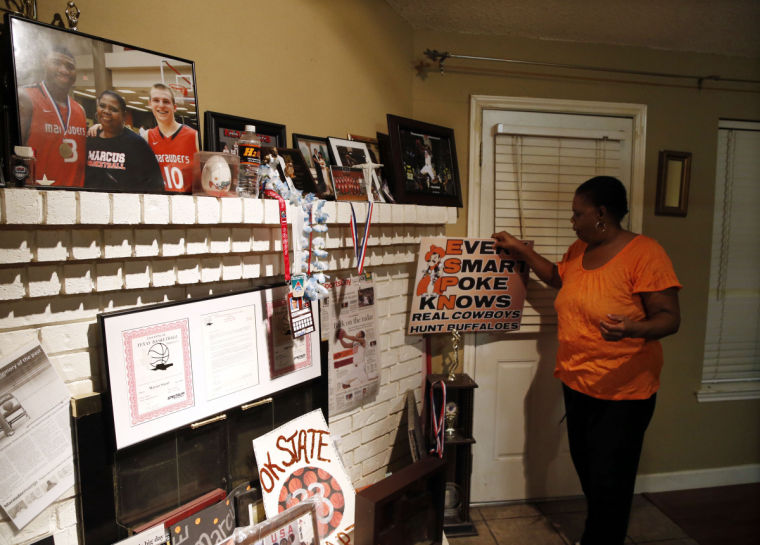 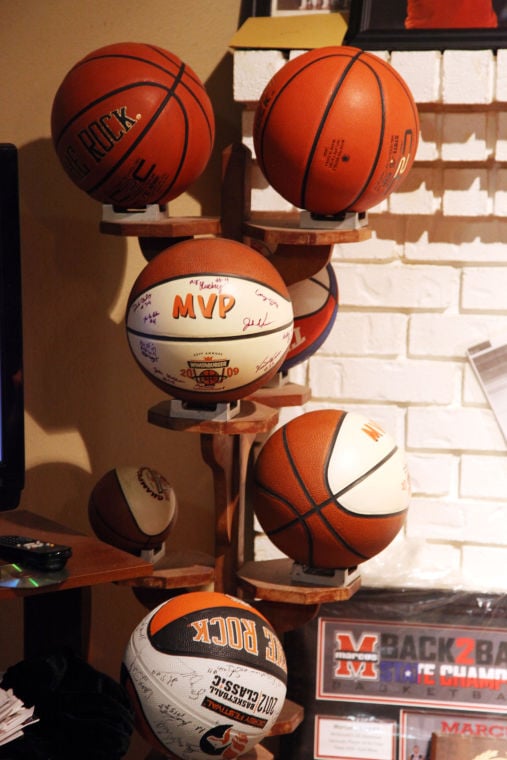 FLOWER MOUND, Texas - Through tragedy and triumph, six words have carried and connected mother and son.

"All the time," Marcus Smart replies.

Through the difficult years following the death of Marcus' oldest brother?

When Marcus blossomed into one of the nation's most-prized basketball recruits?

Instead of expected money and possible fame, faith and family have remained the focus for the Smarts during Marcus' continued rise to stardom at Oklahoma State.

"Family goes a long way," Camellia said. "When you've got family during the good times as well as the bad times, it means a whole lot."

One more Christmas with Todd

Marcus remembers Christmas 2003 like it was yesterday. His mom had been asking what present he wanted, and he kept saying, "Nothing, Momma."

His 9-year-old heart desired his family to be together. Marcus' oldest brother, Todd Westbrook, had been battling cancer off and on for 18 years.

"Going into a week before (Christmas) he was in really bad shape," Marcus said. "I just remember sitting down and praying to God, 'Please let me have my brother for one more Christmas.' "

Years before Marcus was born, a tumor was found behind Todd's eye following his all-district sophomore basketball season in Lancaster, Texas. He went through chemotherapy and returned to the court as a senior, and led his team to the state semifinals.

Although he was sick for so long, Todd never complained.

"He didn't let you know he was suffering," Camellia said. "He had a positive attitude and he was so strong."

Camellia, who had two sons with Todd's father and two with Marcus' dad, spent most of her evenings at the hospital, sometimes crawling into the bed with her oldest.

In late 2003, the doctor told Camellia that Todd had internal bleeding and had taken a turn for the worse.

"I did everything I could to keep from tearing up because he didn't like me to cry around him," Camellia said. "He said, 'We're not crying. God has the last say.' "

For Christmas, Todd gave Marcus a personalized necklace. But Marcus already had what he wanted: their family spending the holidays together.

Camellia told Marcus: "God is good. He does answer prayers, and don't you ever forget it."

"The first couple of years (after Todd's death) were really confusing, just really stressful," Marcus said. "It has been really hard because that was somebody I looked up to and could talk to and helped me out in a lot of things."

Being the oldest, Todd imparted life advice to his brothers, particularly in his final days.

"Each one of them took it in stride and in their own way and went on with their life," Camellia said. "I believe they're doing better (because of Todd).

"If he hadn't died, we don't know which way it would have went. But by him passing and before he passed giving them some wisdom ... I believe that helped them a whole lot."

A decade later, Marcus is overcome with emotion when reflecting on his brother and the years that followed Todd's death.

"Time heals everything, so it is healing but is never forgotten," Marcus said.

"Once we talked about it and understood that everything is all right, we came together and became closer as a family."

When Marcus was a kid, he once told his parents that he would help them retire after he made it to the NBA. Camellia looked to her husband, Billy Smart, and back to Marcus.

Camellia had always told them: "Whatever you want, it's not impossible. But you've got to believe and trust in the Lord." She thought Todd could have gone to the NBA out of high school before he got sick, but her other sons? No way.

Because he was bigger than the other players on his AAU team, Marcus was the designated rebounder. He wasn't allowed to shoot. (Then-and-now teammate Phil Forte probably was.)

Camellia told him, "Marcus, you've got to work on your free throws because the only time you're going to (score) is when they foul you."

But in junior high, Marcus started to spend more time in the gym and take basketball more seriously. The threat of gangs in their south Dallas neighborhood and the appeal of a better education in nearby Flower Mound resulted in the Smarts relocating into a rental house owned by the Forte family.

At Marcus High School, Marcus developed into an elite prospect, as he helped the Marauders to back-to-back state championships alongside best friend Phil. Before they decided to continue playing together in Stillwater, Marcus drew recruiting from top schools as a McDonald's All-American but remained as humble as ever.

OSU coach Travis Ford discovered why while sitting next to Camellia during a 2011 state-tournament game.

"That's one of the reasons I think he's close to her. She's not your typical parent. He could go for 30 (points) and after the game, she'll say, 'You shouldn't have let him get that rebound.' "

Marcus also is close to his dad, who is the quiet one while Camellia is more vocal. Her dynamic with Marcus has always involved being open and honest with each other.

"He's always been a momma's boy," Forte said. "They have such a close relationship and they talk all the time. I think it just shows the type of person he is."

Camellia pushes Marcus but leaves major decisions up to him. He chose OSU, and he chose to return after his Freshman of the Year season.

"He was struggling with it," Camellia said. "He came home and said, 'Mom, what do you want me to do?'

Days later, Marcus broke the news that he was staying at Oklahoma State one more year. Camellia, who would have backed him 100 percent either way, responded with "Praise the Lord."

Never mind that NBA money - Marcus would have been drafted very high - would have paid for a home or even a kidney transplant.

Camellia, the strongest person Marcus said he knows, has one kidney and goes to dialysis three times a week. When Marcus is home and his mom is in bed after a four-hour treatment, he lies down next to her and asks how she is feeling.

Among Todd's last words to his brothers were, "Help take care of Momma when I leave here."

"That's a big deal to me," Marcus said. "All my life growing up I've seen what my mom's been through and always wanted to be the one to better her life. I have the opportunity to do that, so it's just a blessing."

The Smarts spent Christmas in Lancaster with Camellia's side of the family, and Marcus gave his mother a necklace with her birthstone before heading back to Stillwater to resume his sophomore season.

A year from now, their lives could be much different. But Camellia doesn't want to dwell on what changes could accompany Marcus' planned departure for the NBA after this year. They've never had money and don't know what they've missed out on, not to mention they realize money can't buy happiness.

"My mother used to say, 'Don't count your chickens before they're hatched,' " she said. "Anything could happen. But we're going to enjoy the ride while we can."

The highlight of Marcus' sophomore season has been his 39-point performance against Memphis in November. Afterward, Marcus' next-to-oldest brother, Jeff Westbrook, remarked how much Marcus looked like Todd on the court.

More than anything, Camellia wants Marcus to have as much fun as possible before dealing with the pressure of making it on the professional level.

"He's still a young man that is in school and enjoying himself," Camellia said. "When we come to the end of that rainbow, we're going to know how to enjoy it and how to accept it.

"Right now, we just take it one game at a time. We're not that far up the road."

That road is expected to arrive June 26. In the 2014 draft, Marcus is again projected among the top picks. After his name is called, his mom will give him a hug and they'll likely share their usual exchange.

No. 11 Oklahoma State vs. Texas

Camellia Smart talks about her son

Check out stories, photos and videos on Marcus Smart.

Check out stories, photos, videos and statistics on Marcus Smart.

Oklahoma State sophomore Marcus Smart officially declared for the NBA draft Monday, April 7. The two-time All-American is projected to be a to…

A look at Marcus Smart's family, his house in Flower Mound and old family photos.

???, mother of Oklahoma State's Marcus Smart cheers from up high in the stands during their game against Delaware State in Stillwater, OK, Dec. 17, 2013. MICHAEL WYKE/Tulsa World