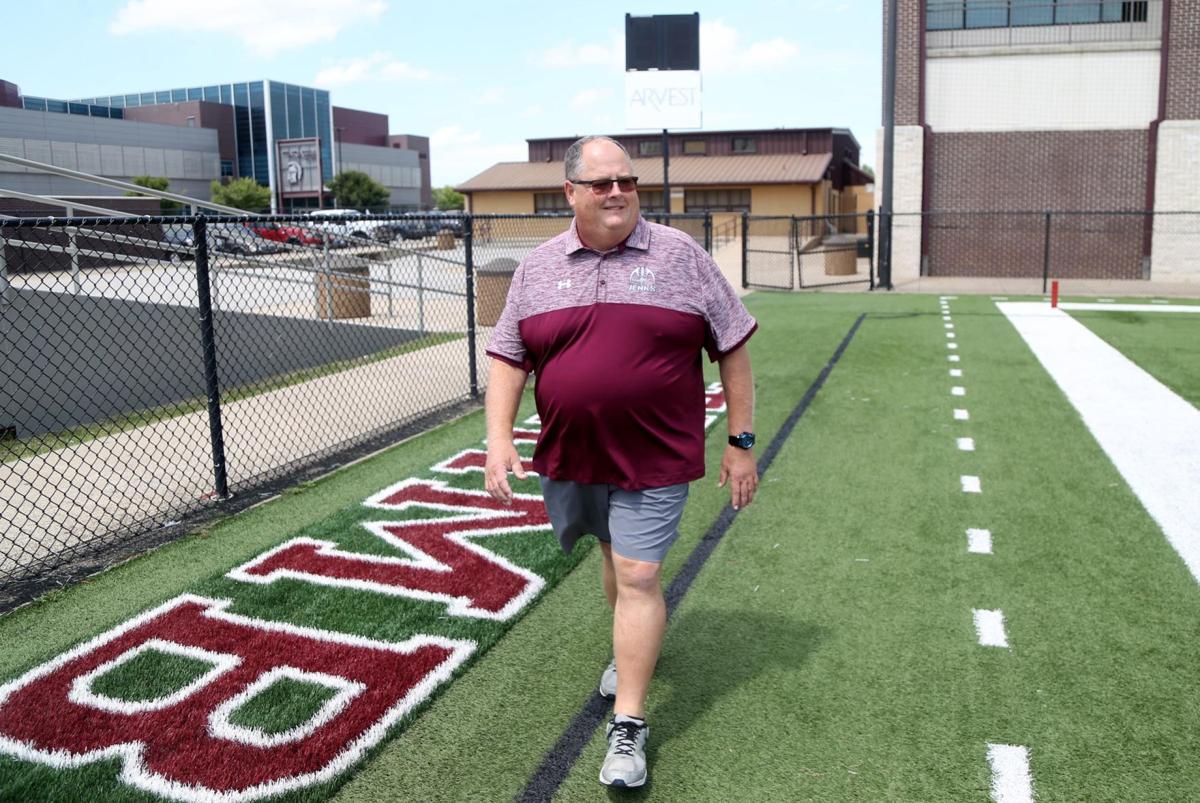 Jenks football coach Allan Trimble walks past his name on the stadium turf on Friday. The stadium has been renamed to honor the longtime Trojans coach. Trimble was honored in a short ceremony before Friday night’s scrimmages involving five area teams. MATT BARNARD/Tulsa World 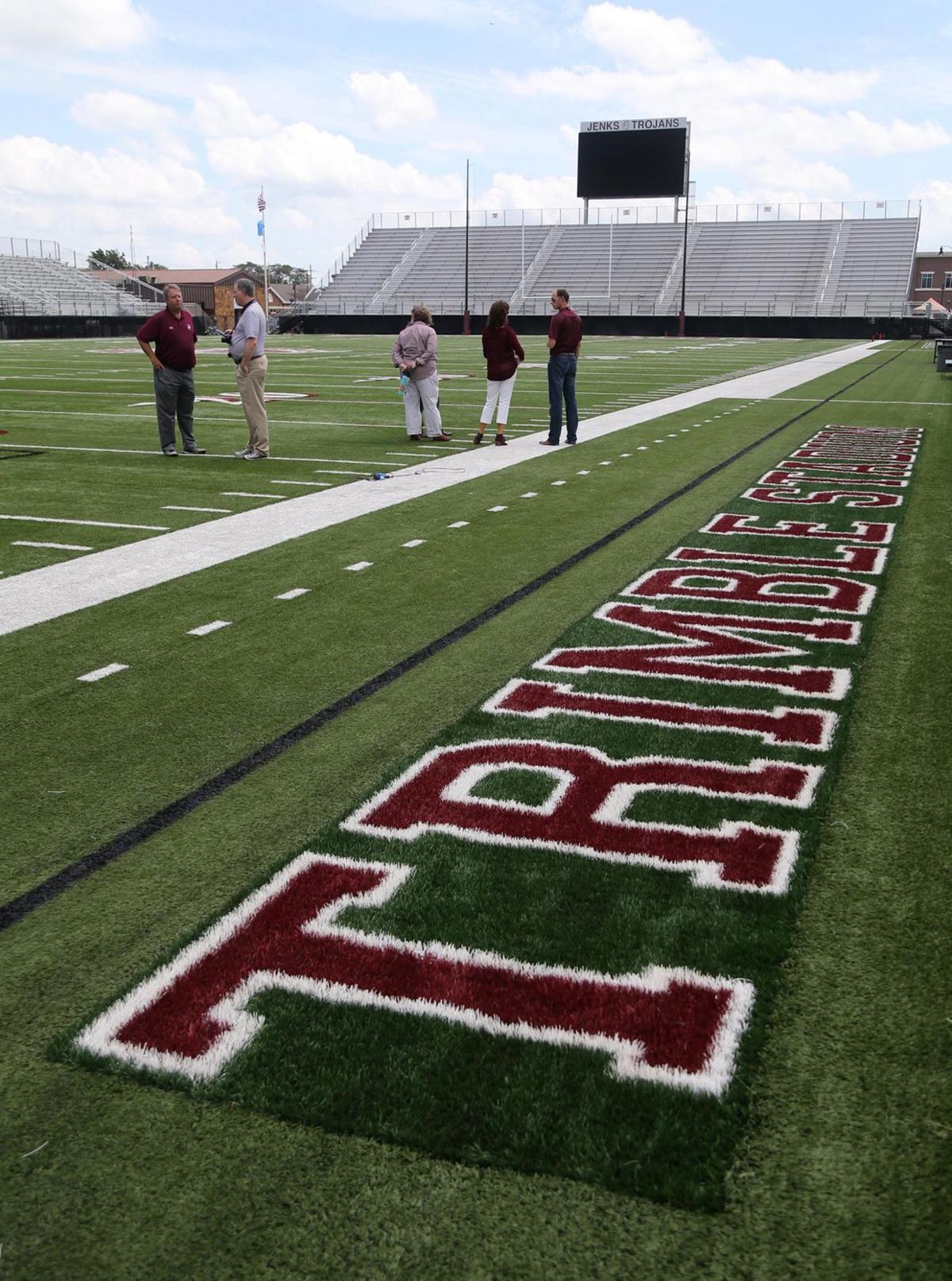 Jenks football coach Allan Trimble's name is visible on the stadium turf on Friday. The stadium is being renamed to honor the longtime Trojans coach. MATT BARNARD/Tulsa World 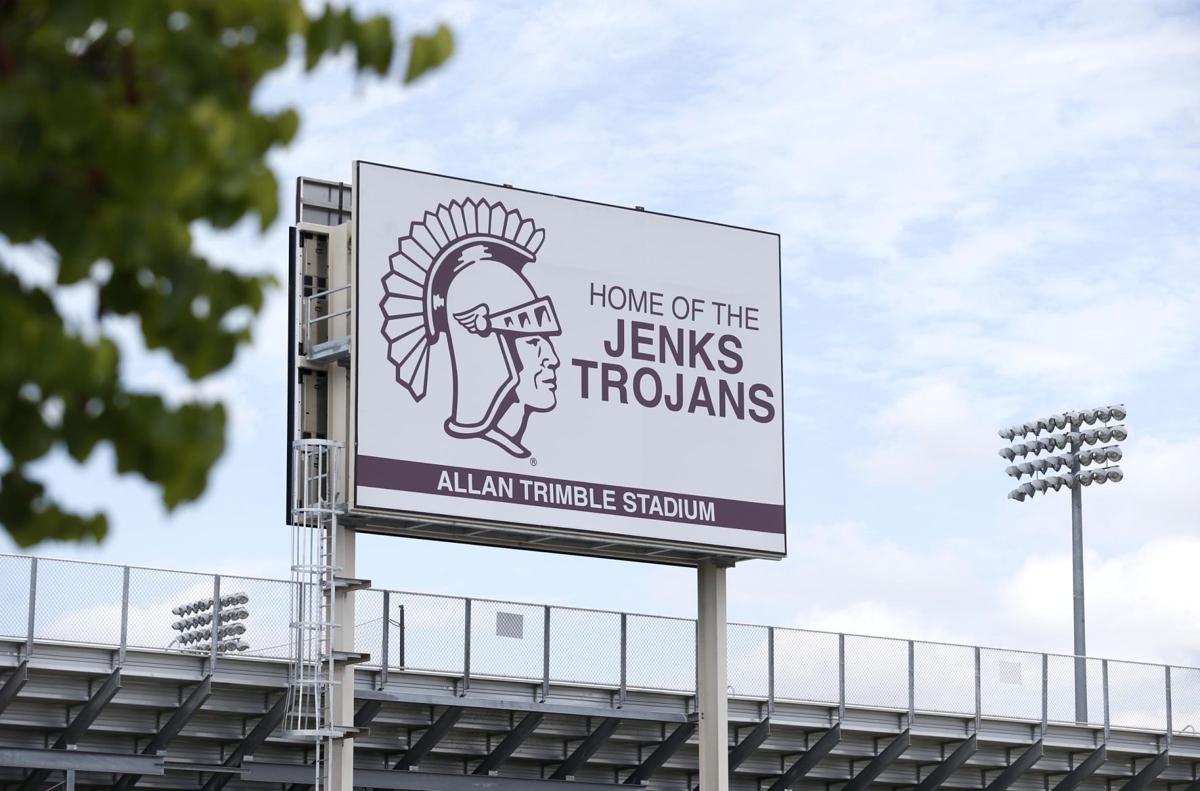 Jenks football coach Allan Trimble's name is visible on a scoreboard at the school stadium on Friday. MATT BARNARD/Tulsa World 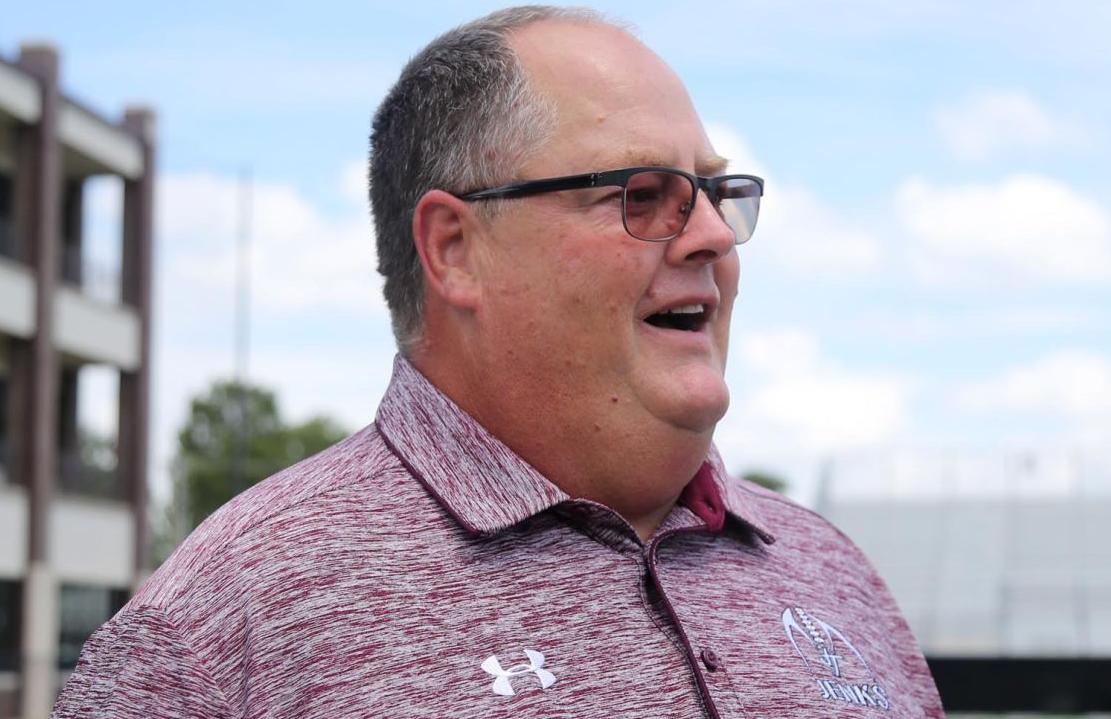 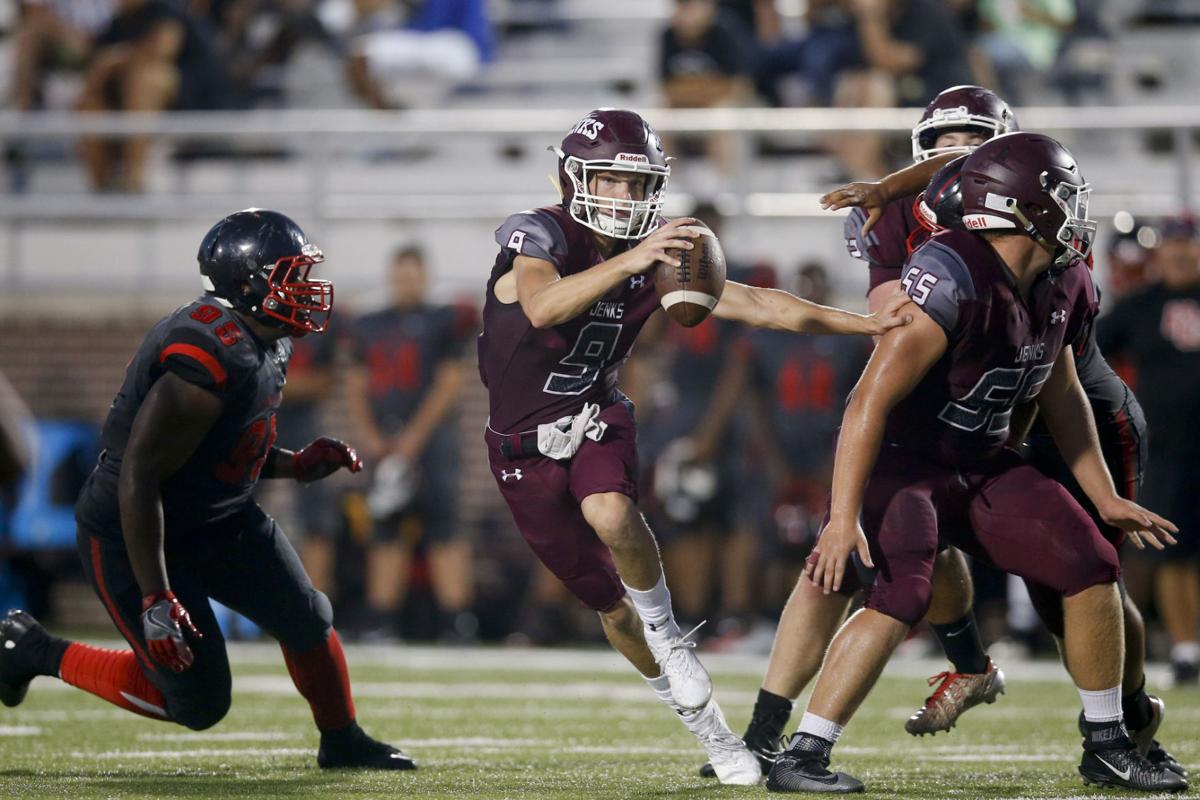 JENKS — It’s still called the Trojan Preview, but the venue where the preseason football scrimmage is played has a new name.

“They’ve done a pretty good job of keeping this a secret until the last few days,” Trimble said in an afternoon news conference. “It’s very exciting, but also very humbling.”

Diagnosed with incurable Amyotrophic Lateral Scleroris in the summer of 2016, Trimble has guided the Trojans to 13 state championships, winning more gold balls in football than any other Oklahoma high school coach.

“What we think about Allan is not just what he’s done in football,” superintendent Dr. Stacey Butterfield said. “It’s the difference he’s made in our community, how he touched lives by not only telling, but also showing, how to be humble and find fulfillment through serving others.”

Trimble was honored in a short ceremony before football teams from Jenks, Sand Springs, Muskogee, Putnam City and Del City took the field for practice mini-games.

He was accompanied on the field by wife Courtney; his parents, Dale and Mary Nell Trimble, of Cleveland; sister Kim Smith and family, of Cleveland, and others. But daughters Tori Trimble and Tylar Isenberg were unable to attend.

“I really appreciate everybody for showing up tonight … because I really feel like it’s an honor that should be celebrated with all Jenks fans, this community, this school, my family and so many great players and coaches who have come my way,” Trimble told the crowd.

“I’m very humbled, very honored, truly appreciative of everything you guys have done for us. Thank you from the bottom of my heart,” he said.

Butterfield said the administration and school board collaborated on the decision to rename the stadium. It was approved in the spring, but was largely kept under wraps until the words “Allan Trimble Stadium,” were unveiled Friday across the top of the renovated press box.

Butterfield said no disrespect was meant to the memories of Francis Hunter and Charles Dwelley, the late former Jenks High football players for whom the Jenks athletic field was named on Thanksgiving Day 1929.

In the news conference, Trimble reflected on what it meant to have a stadium named in his honor even as his coaching career continued.

“I haven’t gotten my mind around that, yet. I’m a huge Bill Snyder fan, and when you go to Manhattan (Kansas) and see ‘Bill Snyder Family Stadium,’ I’ve always thought, ‘You know, they must think a lot of that guy,’” he said.

Snyder, Kansas State’s Hall of Fame coach, has 202 wins over 25 years at the helm.

Trimble continues to show no outward sign of being affected by his illness. How has he been during this preseason as he continues to cope with his incurable disease?

“I’m blessed,” he said. “I’m certainly not full of energy, but I’m full of happiness and excitement.”

Jacob Scheihing drilled a 24-yard field goal as time expired, salvaging a tie for the Roughers, a 6A Division II semifinalist last year.

Muskogee led 14-10 on Patrick Walker’s 1-yard run with about four minutes left, but Putnam retook the lead on the next play as AJ Newsome unloaded a 70-yard bomb to Jawaun Bell. Newsome also had an 8-yard TD run for the Pirates.

The Trojans unveiled a new set of receivers and four men made plays, helping Ian Corwin throw for 141 yards and account for two TDs.

Braden Phipps had a 51-yard reception from Corwin, Will Cox caught a 22-yard TD pass and D.J. Wagoner and Blake Pitcock had three catches each. Corwin was 8 for 12 through the air and put the game out of reach with a 36-yard run with 1:58 left.

Payton Scott scored on an 8-yard run and totaled 41 yards on six carries, lifting the Sandites to victory over a Trojan squad largely of second-teamers.

Jenks backup quarterback Stephen Kittleman, a freshman, connected with six different receivers while going 8 of 12 for 124 yards. He had the Trojans in scoring position late before taking successive sacks by the Sandites’ Hayden Kramer and Kris Edwards.

Jenks football coach Allan Trimble walks past his name on the stadium turf on Friday. The stadium has been renamed to honor the longtime Trojans coach. Trimble was honored in a short ceremony before Friday night’s scrimmages involving five area teams. MATT BARNARD/Tulsa World

Jenks football coach Allan Trimble's name is visible on the stadium turf on Friday. The stadium is being renamed to honor the longtime Trojans coach. MATT BARNARD/Tulsa World

Jenks football coach Allan Trimble's name is visible on a scoreboard at the school stadium on Friday. MATT BARNARD/Tulsa World