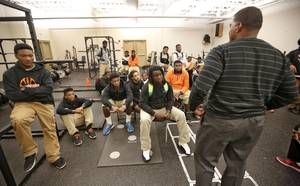 Douglass High School head football coach Willis Alexander talks with players during a team meeting in Oklahoma City, Monday December, 1 2014. Coach Alexander informed the team that a formal request was made to the Oklahoma Secondary School Activities Association to allow Douglass and Locust Grove football teams to replay the final minute of their Class 3A quarterfinal game. STEVE GOOCH/The Oklahoman 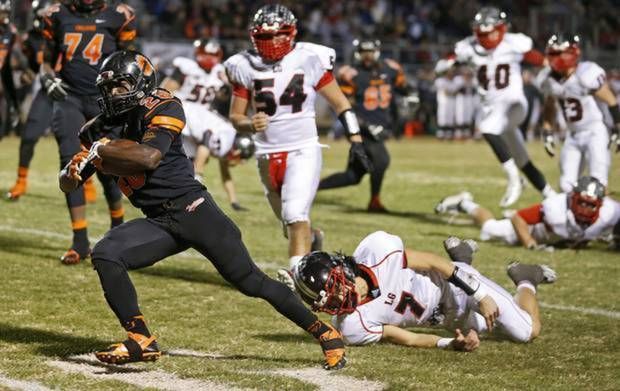 Jimmie Tramel: Here's some context to the Locust Grove story

Plato and Aritstotle believed art should imitate life. But what about life imitating other life?

In a case eerily similar to the one involving Locust Grove and OKC Douglass, a Kentucky high school has lost a playoff football game on a similar officiating error.

The call in question was the same, a sideline infraction.

In both cases, the losing team had a pivotal score wiped out because officials marked off the penalty from the previous spot instead of applying it after the touchdown.

And the only key difference between the two cases?

The one in Kentucky didn’t wind up in court. On Monday, the Kentucky High School Athletic Association sanctioned five officials in Louisville DeSale’s 14-7 Class 2A semifinal win over Murray, Kentucky on Nov. 28.

On Wednesday, a district court judge will decide whether OKC Douglass deserves a replay — wholly or in part — of its 20-19 loss to Locust Grove in the Class 3A quarterfinals, also played on Nov. 28.

“It’s interesting that the same situation occurred on the same night in two different states, both in their playoff systems,” said Ed Sheakley, executive director of the Oklahoma Secondary School Activities Association.

“If you read the (Kentucky High School Athletic Association) press release, the action they took was very similar to what we did,” Sheakley said. “They admitted an error, sanctioned the officials and told the offended party that there was no administrative remedy for this type of situation that would not unfairly impact the other party.”

But the Douglass case didn’t stop there. The OSSAA’s board of directors denied the school’s appeal in special session last week and the Trojans immediately filed suit in Oklahoma County district court.

Jones allowed the other semifinal to go forward, and Cushing punched its ticket to the 3A title game with a 26-14 upset of Kingfisher.

Locust Grove administrators are hopeful that the judge will allow their team to move forward with Wednesday’s ruling. But many are predicting the case will end up in the Oklahoma Supreme Court.

Douglass was deprived of the go-ahead touchdown with 1:04 left when officials called a second sideline infraction against the Trojans and marked off the penalty from the previous spot instead of applying it on the extra point or ensuing kickoff.

According to the Louisville Courier-Journal, Murray trailed 7-0 in the second quarter when Keshun Love went 80 yards for an apparent trying score. However, an official made contract with Murray coach Keith Hodge on the sideline.

KHSAA commissioner Julian Tackett said the referee was correct in throwing the flag but should have allowed the touchdown.

But KHSAA rules “allow no opportunity for fixing (the mistake) without depriving both teams of the final two quarters that have already been played. It is impossible to do,” Tackett told the Tulsa World.

Locust Grove attorneys argued last week that game conditions favoring the Pirates in the fourth quarter on Nov. 28 couldn’t possibly be recreated in any kind of replay.

In 2008, the MHSAA board of directors had such a situation and reversed Leland’s 24-21 playoff victory over Walnut.

Leland scored the winning touchdown on the final play but was called for an illegal forward pass. Normally, a game may not extend on an offensive penalty, but Leland received an untimed down and scored anyway.

The MHSAA board sent Walnut to the playoffs in Leland’s place, and Leland parents appealed all the way to the Mississippi Supreme Court.

Georgia used to allow protests, but not anymore. The turning point came in 2003 when a misapplied dead ball foul resulted in Duluth and Dacula replaying the final 11:51 of their district game.

The replay fell on Monday night following the end of the regular season, nine days after Duluth had won 17-14. Bill Sanders of the Atlanta Journal-Constitution wrote “never in Georgia had two teams met like this, replaying a portion of a game held days earlier.”

According to Sanders’ report, Duluth led 10-7 early in the fourth quarter when one of its players was flagged and ejected for a personal foul.

Duluth was penalized 15 yards, but the yardage was marked off following completion of a play on which Duluth had made a first down. Instead of facing third-and-18, Duluth was given a first down and went on to score on the drive.

Dacula protested the application of the penalty and Dr. Ralph Swearingin, then executive director of the Georgia High School Association, upheld the appeal.

“Obviously, I was concerned what kind of precedent it might set, and I also had to objectively decide whether that particular play had a direct bearing on the game,” Swearingin, now retired, told the Tulsa World in a phone interview. “Once I gathered all the facts and talked among my staff members, we decided the only option we had was that the protest had to be upheld.”

Duluth started the replay by overcoming third-and-18, went on to score on the possession anyway, and won 17-10.

Within months, the GHSA voted to prohibit protests for any reason.

“We had been trying to change the rule for some time because the (National Federation of State High School Associations) doesn’t recognize them,” Swearingin said. “And so when the controversy hit, the board decided it was time to change.”

Swearingin said he had been following the situation in Oklahoma and found it “regrettable for everyone.”

“I hate it for the folks at the (OSSAA), for such good people to get caught in the middle like that. The lesson you sometimes learn is that there are bad decisions and you sometimes have to live with the consequences,” he said.

Douglass High School head football coach Willis Alexander talks with players during a team meeting in Oklahoma City, Monday December, 1 2014. Coach Alexander informed the team that a formal request was made to the Oklahoma Secondary School Activities Association to allow Douglass and Locust Grove football teams to replay the final minute of their Class 3A quarterfinal game. STEVE GOOCH/The Oklahoman