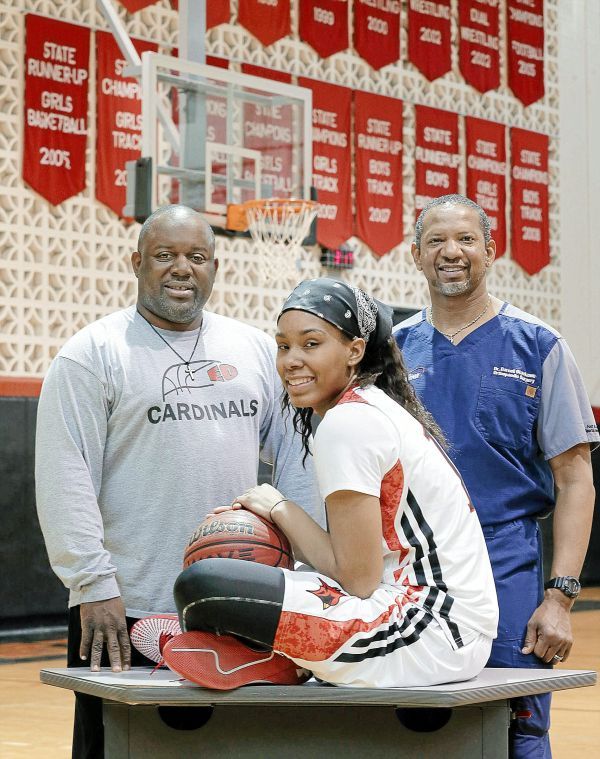 East Central basketball player Marcia Reed (front) with her coach Samy Mack and Dr. Darnell Blackman at the school's court in Tulsa, OK, Mar. 10, 2015. Reed blew out both her ACLs, which were treated by Dr. Blackman allowing her to play in this year's state championship tournament. MICHAEL WYKE/Tulsa World 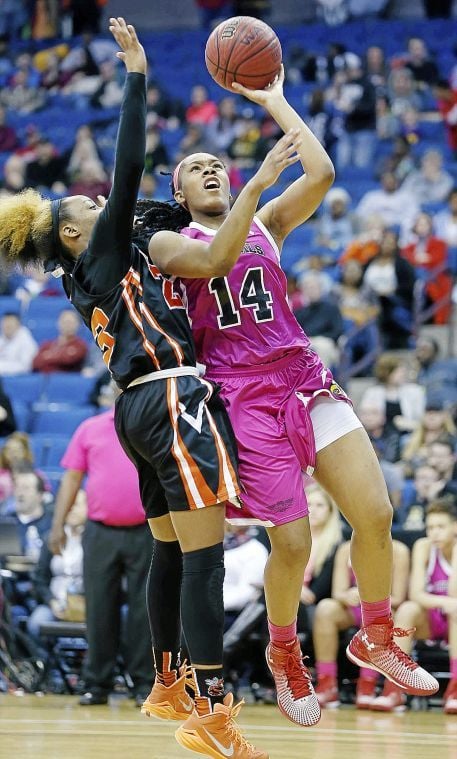 East Central basketball player Marcia Reed (front) with her coach Samy Mack and Dr. Darnell Blackman at the school's court in Tulsa, OK, Mar. 10, 2015. Reed blew out both her ACLs, which were treated by Dr. Blackman allowing her to play in this year's state championship tournament. MICHAEL WYKE/Tulsa World

Marcia Reed has taken a long and unexpected road back to the Class 5A state basketball tournament.

The 6-foot-1 senior will be part of the action when the No. 1-ranked East Central Cardinals face Altus at 3:30 p.m. Thursday in a first-round game at the Mabee Center.

“I’m very excited because I didn’t get to play last year,” she said.

As one of the top players in a premier program, Reed probably would have had major college scholarship offers pouring in by this point in her senior season.

But all that changed when she tore her right ACL in a game against Booker T. Washington in January 2014.

It forced her to miss last year’s state tournament. She had to watch from the sidelines as the Cards finished runner-up for the gold ball for the fourth time in five years.

“Afterward people came to me and said we probably would have won if I would have been able to play,” she said. “It made me feel like it was my fault.”

More bad news was ahead. Reed recovered from her knee surgery just in time to begin practicing for the 2014-15 season. But during an October scrimmage in Skiatook, she bumped knees with another player and felt something pop in her left knee as she crashed to the floor.

The prognosis was a torn left ACL. At first, Reed was crushed. She assumed her high school career was over.

But Dr. Darnell Blackmon, a surgeon for the Orthopaedic Center, 1809 E. 13th St., had another assessment. He had done the surgery on the first knee and could see that the second injury wasn’t as severe.

“Not every ACL injury requires reconstruction,” Blackmon said. “Hers was a partial tear. On such injuries, you look to the stability of the knee. If the ligament is stretched, the knee will be unstable and it’s never going to do well without surgery. But her knee appeared to be stable, so we decided to give her a shot by putting her in a brace and letting her try rehabbing.”

Reed went through six weeks of intensive exercise and therapy before Blackmon pronounced her ready to go before the Tournament of Champions on Dec. 29-31.

She played sparingly against Adair and Southmoore in the first two rounds but came on to score 10 points with a pair of 3-pointers as the Cards upset 6A No. 1 Muskogee in overtime in the championship game.

Since then, Reed has played more and more like a missing puzzle piece the Cards weren’t sure they had. She’s second on the team in points per game (12.2) and is shooting an eye-catching 63 percent from the field. She also is shooting 48 percent from 3-point range, giving the Cards a second long-range option next to Lauren Billie’s 51 percent.

Reed is one of the primary reasons coach Samy Mack says the Cards (23-3) have a good chance of ending their streak of disappointing finishes.

“We’re as healthy and as deep as we’ve been, and I really like this team,” he said.

Blackmon said Mack deserves credit for Reed’s rapid recovery because of the extra time he put in on her training and therapy while she worked four to six hours a day.

“He’s been on her non-stop,” Blackmon said. “He pushed her beyond her limit and she really stepped up. Another coach probably wouldn’t have done as well, but he’s put in the time because he knew it was important to her.”

“She was moping and feeling sorry for herself. I said, ‘Hey, we don’t have to do this. We can go ahead and have the surgery and finish this thing up.’ That kind of triggered something for her,” Mack said.

“Once she decided to go ahead with this, it’s been all-day rehab every day. Her grandfather (Ellington Benson) also played a key role. He pushes her every day to ride that exercise bike when she’s at home.”

As early as the Jan. 31 win over Booker T. Washington in the High School Hoops Showcase, Reed played without a brace and scored 16 points. By all accounts, the knee gets stronger with each passing week.

“When I saw (Blackmon) last week, he said it looked like I could about anything I wanted to do,” Reed said.

That much has been apparent for quite a while.