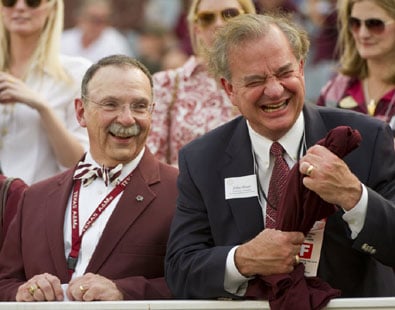 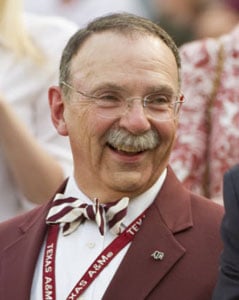 ON THE MOVE R. Bowen Loftin: Texas A&M president said the Aggies are excited to join the Southeastern Conference.

Read all of the coverage about conference realignment, including a timeline and information about the current Pac-12.

Texas A&M is set to join the Southeastern Conference, the league said Sunday, possibly signaling legal hurdles have been cleared for the Aggies to leave the Big 12.

The SEC announced the move will be effective next July, and said Texas A&M will participate in all sports during the 2012-13 academic year. That gives the SEC 13 members and its first addition since South Carolina and Arkansas in 1992.

The Aggies' defection from the Big 12 had been held up by the possibility of legal action from Baylor and other members. The statement released by the SEC did not mention that situation, and spokesman Charles Bloom said he could not comment.

A Big 12 administrator said neither the SEC nor Texas A&M have asked any of the Big 12 schools to waive their right to sue. The person spoke Sunday night on condition of anonymity because of the sensitivity of the situation.

SEC presidents and chancellors voted in favor of the move on Sept. 6.

"We are excited to begin competition in the nation's premier athletic conference," Texas A&M President R. Bowen Loftin said in the statement.

It is unclear if the SEC will add a 14th member for next season or go with unbalanced divisions. Rumored possibilities include the Big 12's Missouri and West Virginia of the Big East.

Texas A&M initiated the courtship in July, unhappy with rival Texas' Longhorn Network, and sparked another tumultuous period for the Big 12.

The Aggies, who play Arkansas on Saturday, give the SEC entry into major TV markets such as Houston and Dallas.

"Texas A&M is a nationally prominent institution on and off the field and a great fit for the SEC tradition of excellence - athletically, academically and culturally," Commissioner Mike Slive said in the statement.

Slive, Loftin and others will hold a news conference Monday evening in College Station, Texas.

"I am personally saddened to see Texas A&M depart from the Big 12, and wish I had the opportunity to visit the campus to sit down and talk with their administration," interim Big 12 commissioner Chuck Neinas said in a release. "We will continue to work diligently in securing the long-term stability of the Big 12.

"Now that the status of Texas A&M has officially been determined, the membership can focus on the desired course for the Conference moving forward. Although no timeline has been established, an expeditious pursuit is anticipated."

A&M's official departure from the Big 12 was considered the next step needed to determine where this round of conference realignment is headed.

Once that is done, the SEC can decide on a 14th member, if it wants one, and the Big 12 can replace the Aggies.

Texas A&M moved to the Big 12 after 82 years in the Southwest Conference, and its departure to the SEC will mark the first time the Aggies won't be in a conference with rival Texas and Baylor.

Some are worried A&M's departure will jeopardize the future of the annual football game with Texas.

It is one of the oldest rivalries in college football, with the teams first meeting in 1894.

When he announced the school's plans to explore its conference options in August, Loftin said he would like to continue the rivalry no matter the Aggies' conference affiliation. SUBHEAD: The conference says the move will be effective next July.

ON THE MOVE R. Bowen Loftin: Texas A&M president said the Aggies are excited to join the Southeastern Conference.