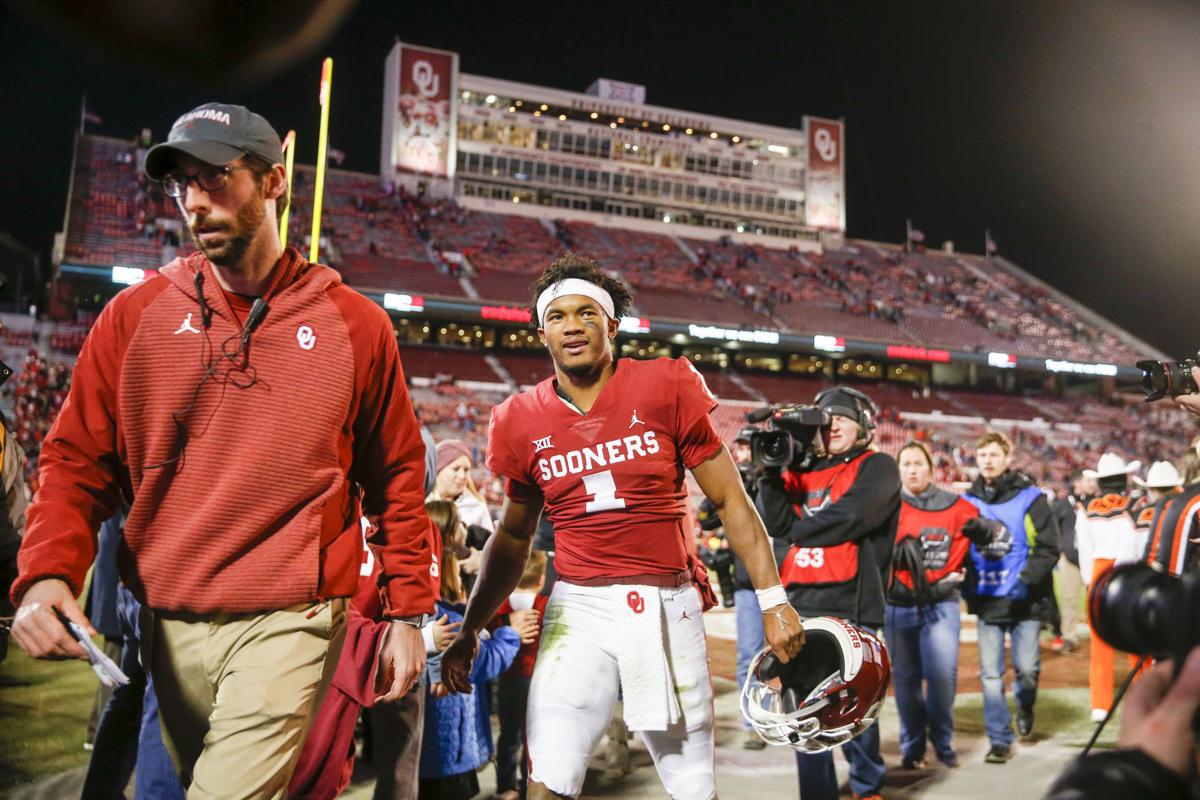 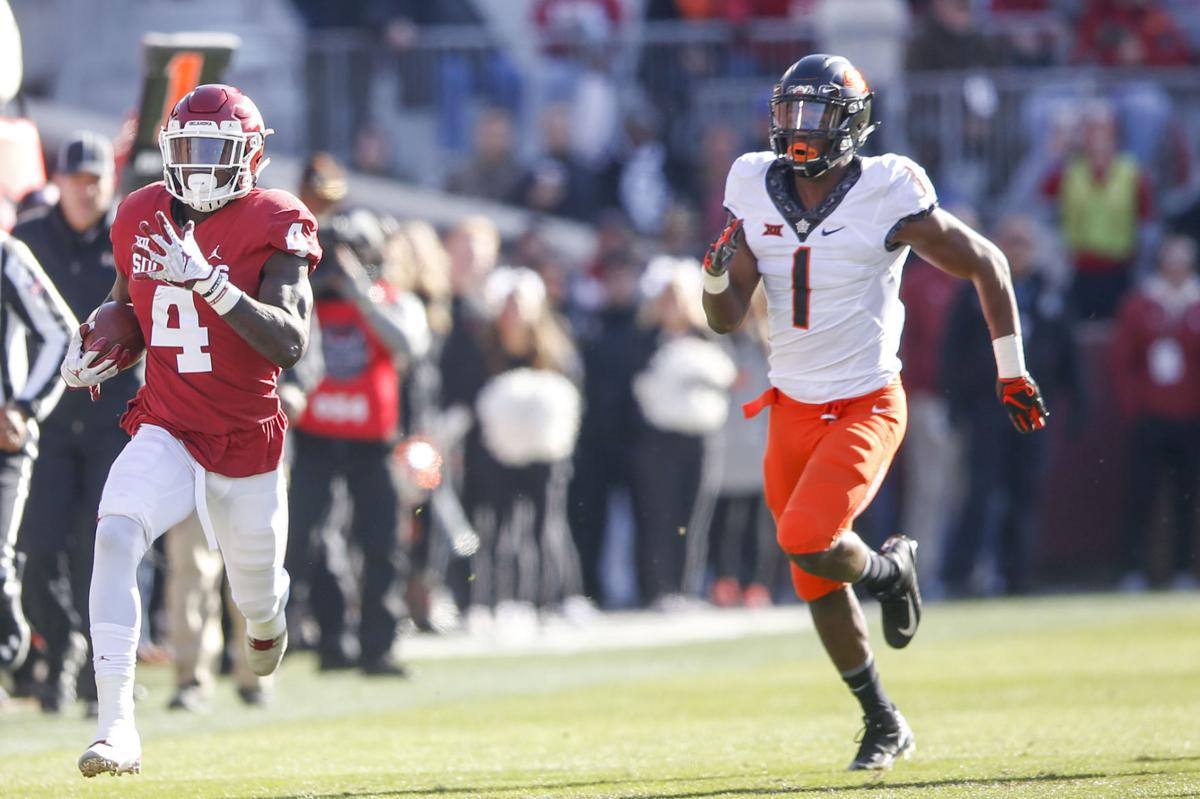 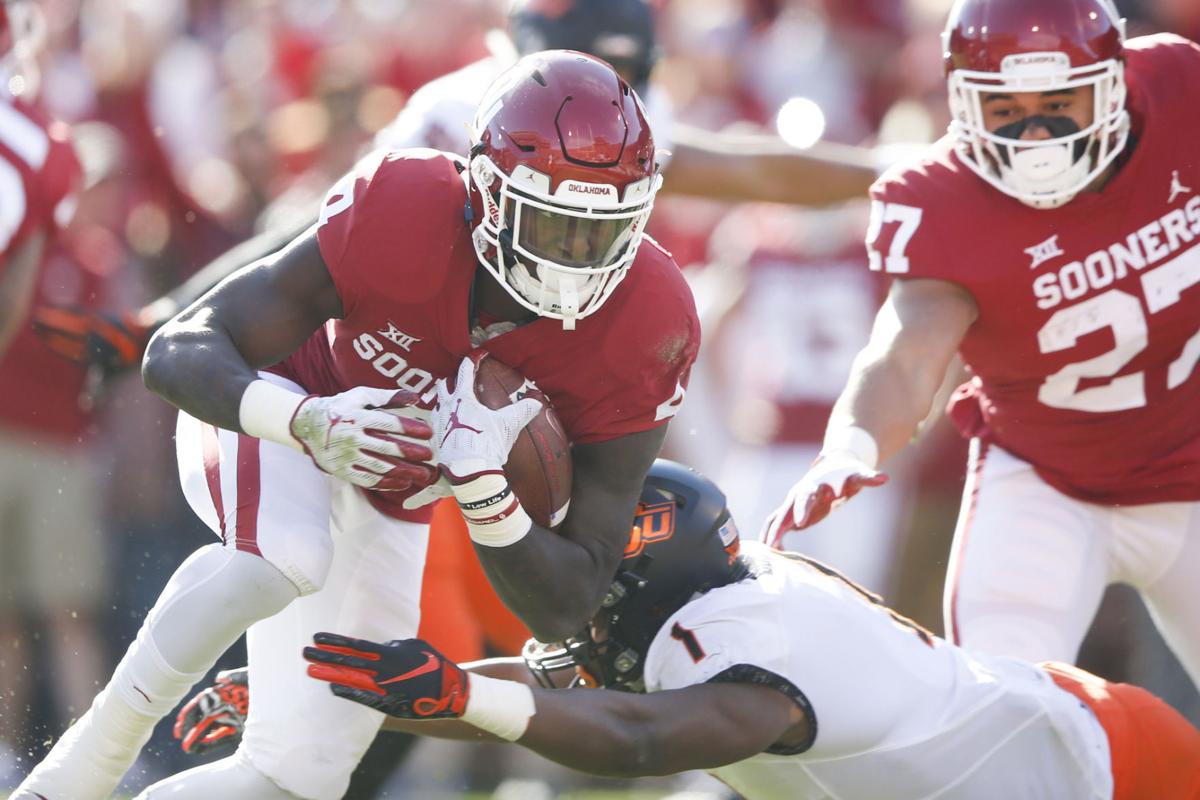 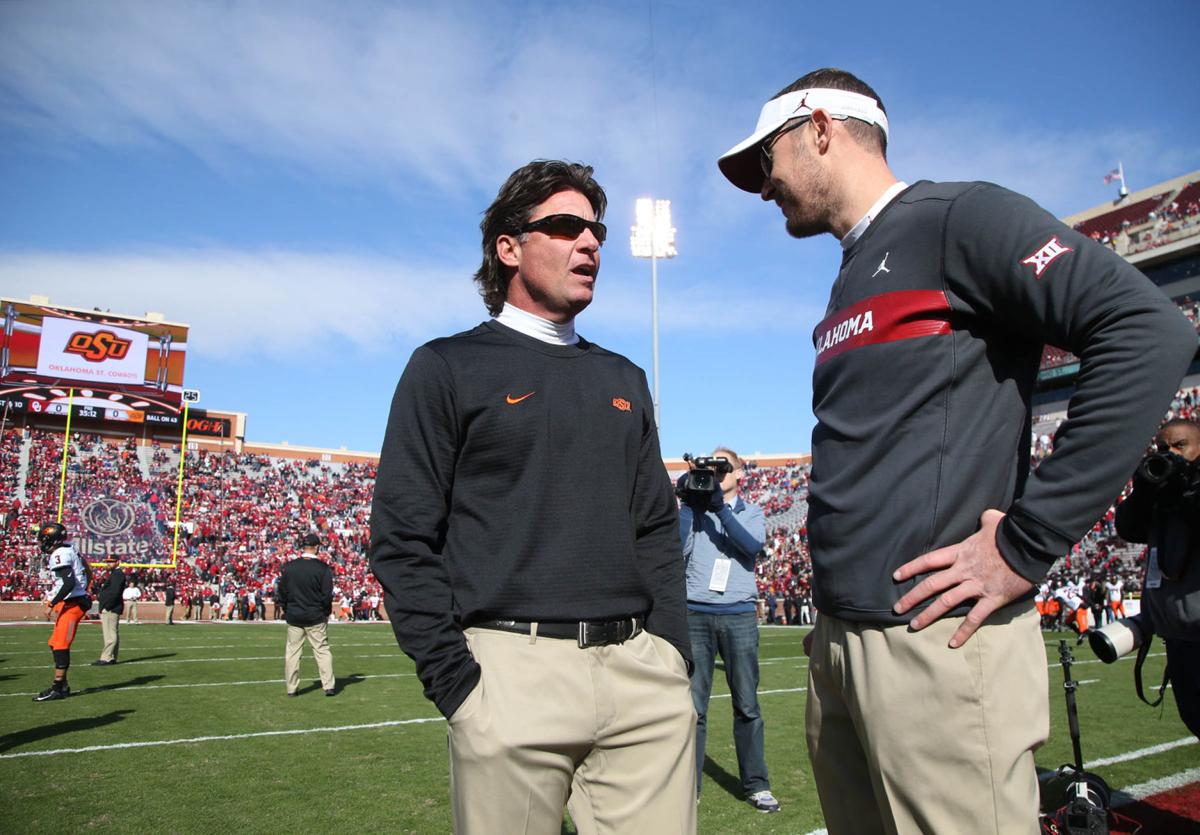 Michael Peters: Sooners don't want to hear it, but defense stands between OU and the College Football Playoff

Everything you need to know in four downs

Guerin Emig: Crazy as it sounds, unfair as it is, Sooners need more from their offense

With his mom on his mind, Union grad Tre Brown makes the play of the game

NORMAN — Bedlam came down to that nail-biting, I-can’t-look moment that college football fans in our state have become adapted to watching.

One play nearly shattered Oklahoma’s dreams of a College Football Playoff bid. A two-point conversion with 1:03 remaining in regulation would have taken a large chomp out of the Sooners’ goals of a fourth consecutive Big 12 championship.

When Tre Brown deflected Oklahoma State quarterback Taylor Cornelius’ try for a game-winning conversion, the OU cornerback was joined by Parnell Motley and Kenneth Murray in a celebration dash that streaked past the OSU bench.

Whether it is by one point or 50 points, all wins look pretty in the left-hand column. But there was some ugliness that drew anxious moments for a Memorial Stadium crowd of 87,635 that nearly witnessed an upset by a 20-point underdog.

“This team has a lot of fight in them,” OU coach Lincoln Riley said. “That’s why I know that we’re going to continue to get better. I know there’s a lot of big, big things in front of us, and big moments that I absolutely feel we’ll be ready for. You can have all the other stuff, but if you don’t have the fight and the heart, you don’t have a prayer, especially this time of year. We’ve got that.

“There’s certainly areas we’ve got to get better at, and we’ll work on those. But if our fight stays like this, we’re going to have a chance against anybody we line up against.”

College football is now in an era where style points matter. And there’s little doubt that the College Football Playoff selection committee will look at the Sooners and be impressed with the offense while still shaking their heads at the defense.

Another extraordinary offensive effort that included 702 yards was highlighted by two 100-yard running backs (Kennedy Brooks with 165 and Trey Sermon with 124) and another 349 passing yards by Kyler Murray but was offset by an OU defense that allowed 39 first downs and 640 yards.

“I’m not satisfied. I’m not happy with how we played,” senior linebacker Curtis Bolton said. “Even me, I made some plays out there, but I’m not happy with how I played throughout the whole game. I’ve gotta put better games together. I can’t expect anybody else on that defense to play better if I’m not holding myself to that standard.

OSU managed seven plays (six pass, one run) that totaled 20-plus yards, including a 24-yard pass with 1:03 left in regulation that pulled the Cowboys within one point, 48-47.

There was no hesitation in Oklahoma State coach Mike Gundy’s decision to go for a two-point conversion to seize a road win.

It was a familiar setting for many OU fans. In 2015, TCU was in a similar situation and Steven Parker’s deflected pass with 51 seconds left salvaged a 30-29 win in a season that ended in the College Football Playoff.

Three years later and in the opposite end zone, Cornelius rolled right and missed on his throw to Tylan Wallace. When Marquise Brown fell on the ensuing onside kick attempt, Sooner Nation let out a collective “whew.”

No. 6 Oklahoma (9-1 overall, 6-1 in Big 12) continues to be carried by a high-powered offense engineered by Heisman Trophy candidate Murray. The junior shined again by going 21-of-29 passing for 349 yards and a touchdown and adding 66 rushing yards.

OU’s ability to trade scores with the Cowboys kept the game close. Only once did OU enjoy a double-digit lead, and that only lasted 54 seconds as OSU cut the advantage to 34-28 at intermission.

Even when Oklahoma State lined up for the two-point conversion with 63 seconds left, Murray was ready for a chance to roll out a game-winning drive.

“We were actually talking about it on the sideline, if they score would they go for 2? Yeah, they’d go for 2, they’ve got nothing to lose,” Murray said. “But yeah, we were prepared. I was prepared to have to go out there and score a touchdown or field goal and win the game.”

There’s a reason for that confidence. It’s not only Murray’s dual-threat style of play, it’s a running game that topped the 300-yard mark for the fourth consecutive game. It’s the reemergence of Marquise Brown (eight catches, 142 yards) who had his first touchdown reception since the Texas game.

It’s a coach that believes in his program, which hasn’t lost a game played in November since 2014.

“We’ve got some big goals in front of us and some big games in front of us,” Riley said. “I still like what we have in that room without a doubt. It’s a really excited locker room right now that knows we won maybe without our best.

“We’re going to have to continue to fight to get to our best as we go forward here.”

Oklahoma State at No. 6 Oklahoma

• Bedlam 2018: Breaking down the matchup

• Bedlam hasn't seen a pair of one-and-done quarterbacks since Al Pena vs. Rhett Bomar in 2005. Why this matchup is unique, with two starters who get only one shot at winning this rivalry.

• Lot of comparisons between this week and 2014, when a five-win OSU team upset Oklahoma as a 19.5-point underdog. That game first turned on a Samaje Perine fumble. The Cowboys will need to win the turnover battle Saturday to have a chance -- but the numbers show a defense that is too often a step behind when it comes to takeaway chances.

• Bill Haisten reflected on the two coaches before Mike Gundy -- Bob Simmons and Les Miles -- and their 5-5 combined record versus Oklahoma.

• Speaking of quarterbacks, Taylor Cornelius was named one of 10 semifinalists for the Burlsworth Trophy -- given to the top current or former walk-on -- on Tuesday.

• Mike Gundy's Bedlam news conference was dominated by questions about penalties, discipline and whether his players are listening. One way he could get their attention: A benching for committing careless penalties.

• The 2015 Oklahoma State team started 10-0 despite an 100th-ranked defense and 114th-ranked rushing offense. This year's team has been better than that, but Bill Haisten writes that the 2018 team instead has the dubious distinction of being Mike Gundy's most-penalized.

Throwback Tulsa: Bedlam football in Norman for first time on this day in 1907

Oklahoma State at No. 6 Oklahoma: With his mom on his mind, Sooners' Tre Brown makes the play of the game

“I talked to my mom before the play had even happened,” Brown said. “Knew they were going to come at me.”

In an attempt to keep pace with the Kyler Murray-quarterbacked Sooners, Cornelius had to be at his best -- and he was, finishing with only the third 500-yard passing performance in OSU history.

“This team has a lot of fight in them,” OU coach Lincoln Riley said.

Michael Peters: Sooners don't want to hear it, but defense stands between OU and the College Football Playoff

Despite racking up over 700 yards of offense, OU was still a two-point play away from being defeated Saturday

Oklahoma State at No. 6 Oklahoma notebook: OU's Caleb Kelly starts at outside linebacker

Kelly had played at inside linebacker up until Saturday