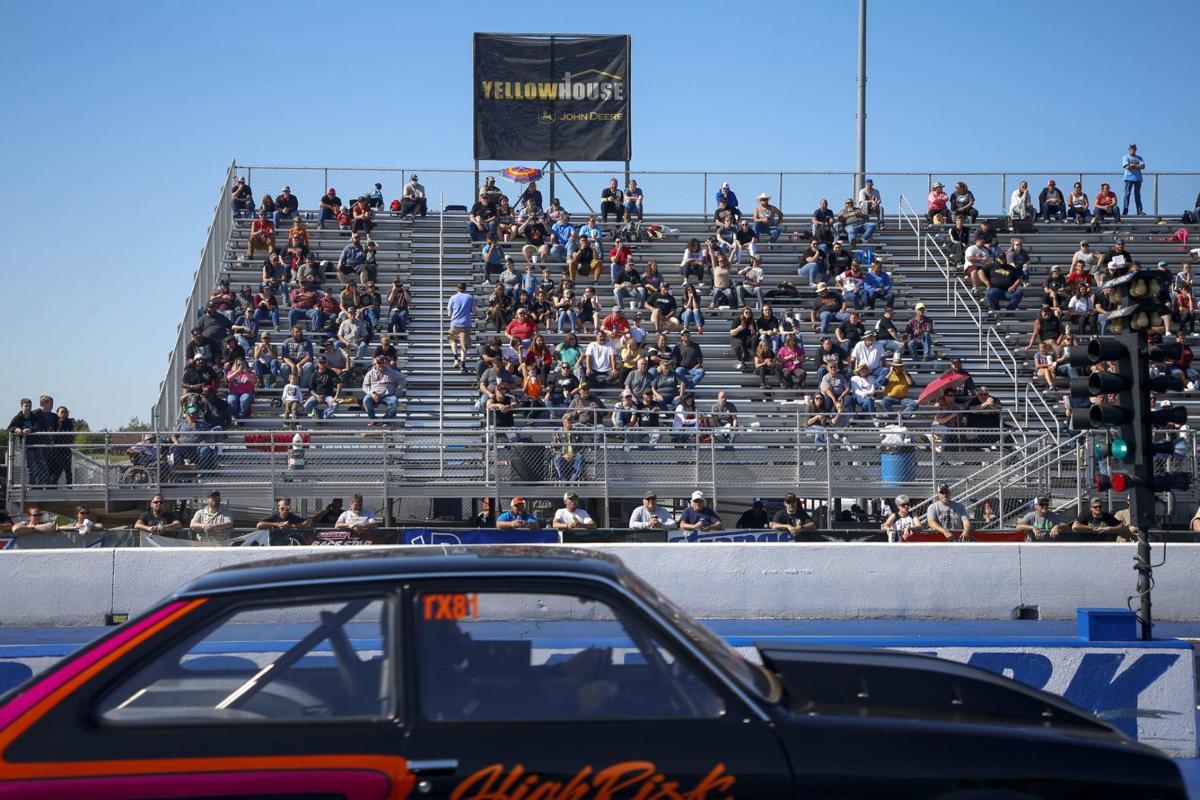 A car races down the track while fans watch during the Throw Down in T-Town at Tulsa Raceway Park in Tulsa on Saturday. IAN MAULE/Tulsa World 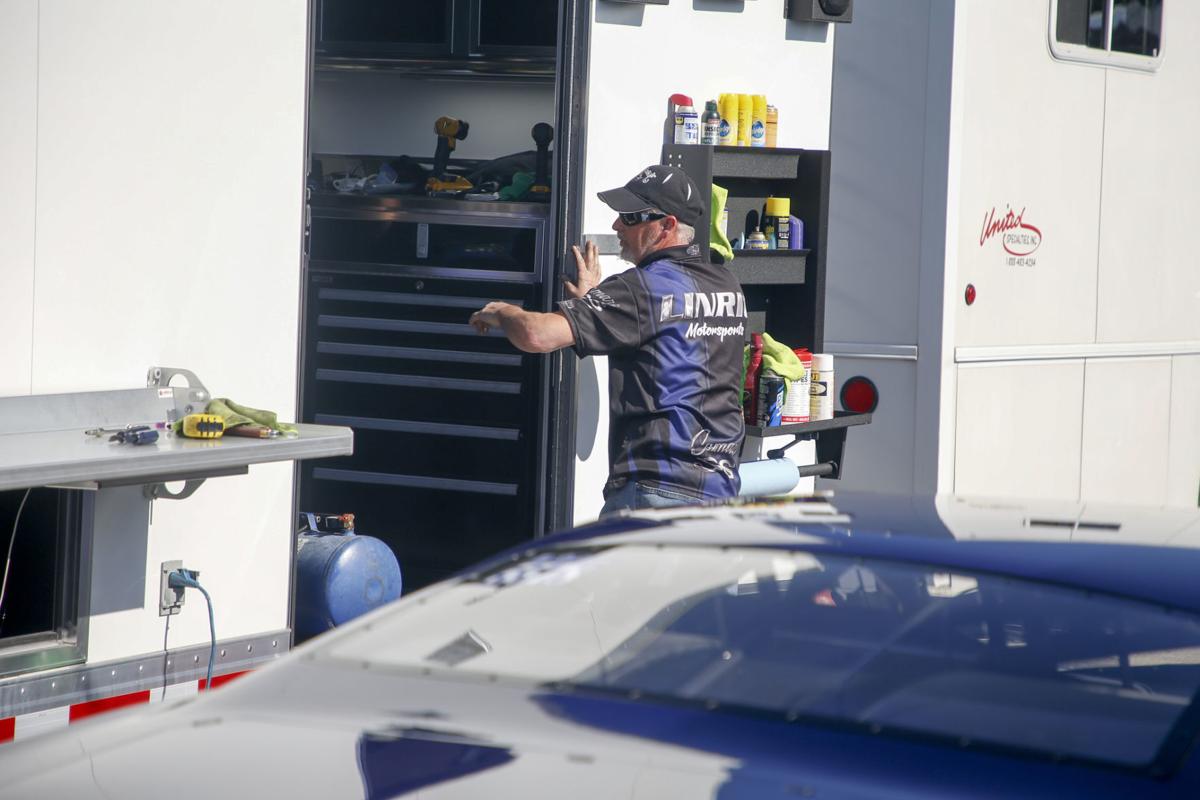 Donnie Brooks of St. Louis walks into a trailer while working on his cars during the Throw Down in T-Town at Tulsa Raceway Park in Tulsa on Saturday. IAN MAULE/Tulsa World 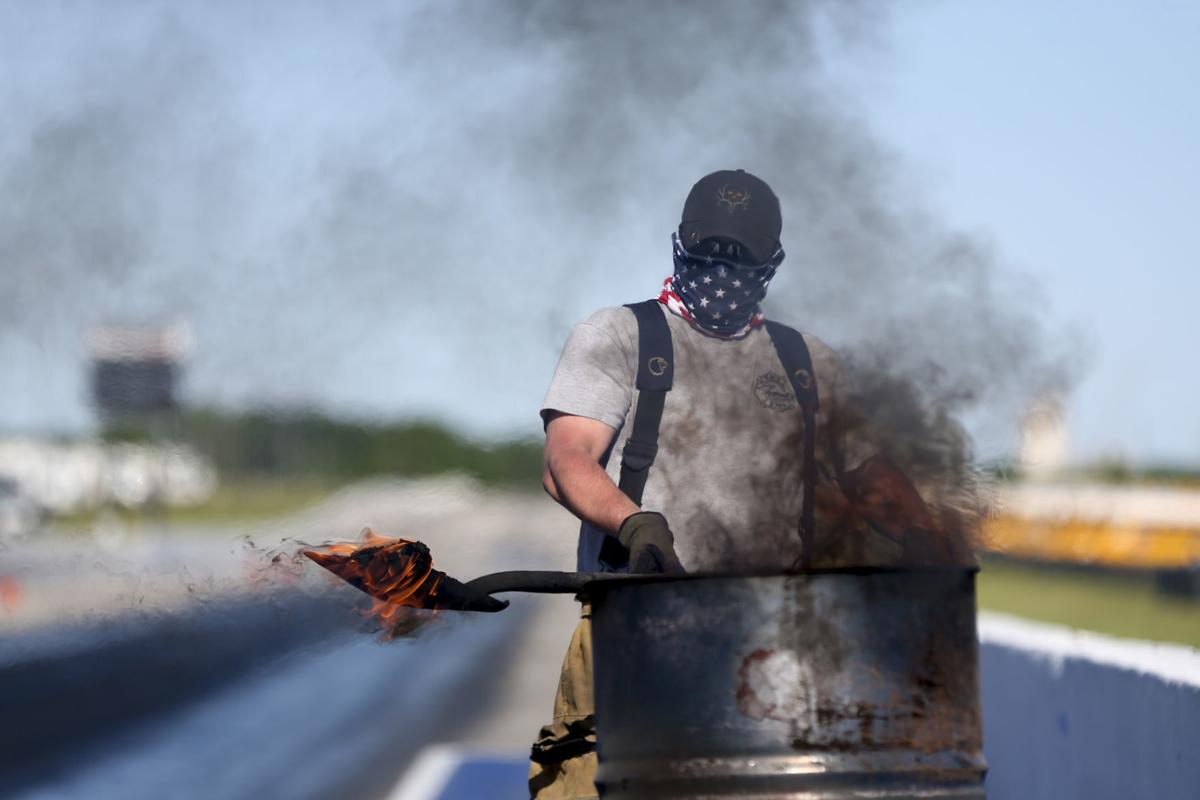 A pit crew puts rubber into a burning barrel while doing track maintenance during the Throw Down in T-Town at Tulsa Raceway Park in Tulsa on Saturday. IAN MAULE/Tulsa World

Sports are starting to reemerge again in the Tulsa area, but not how they were remembered before COVID-19.

It was March 12 when white sheets of paper were taped on the Mabee Center doors to alert the public that the state basketball tournament had been called off because of COVID-19 precautions. That was the local impact, while sports from all NCAA athletic events to every major professional sports league in the United States was canceled or postponed.

The next morning, the Tulsa World’s front sports page was headlined with, “THE DAY SPORTS STOPPED,” and they did in the Tulsa area, for 57 days.

In a Thursday press conference, Tulsa Mayor G.T. Bynum said sports groups will be allowed to practice on fields (complexes and open fields) starting Friday, as long as 25 or fewer people are on the field. Under the new Civil Emergency in Tulsa, groups of 50 or fewer are allowed to gather and the city will issue special event permits for events with fewer than 50 people.

“For organized sports opening up (Friday), our locally branded guidelines follow the recommendations from the state of Oklahoma,” said Lori Just, marketing and public relations director for Tulsa Health Department. “These focus on at-home temperature checks for players, coaches and officials before each practice or game. Those with a temperature above 100.4 are recommended to stay home. Social distancing practices need to be in place between spectators. Cloth face coverings are also recommended, and handshakes, high fives and fist bumps are discouraged. All sports equipment should be cleaned and sanitized at regular intervals. Increased hand washing is recommended or the use of hand sanitizer with an alcohol content over 60%.”

Youth baseball and softball tournaments are some of the first sporting events returning this weekend. Local tournaments include a USSSA Fastpitch sanctioned tournament in Jenks and Coweta, and the Mid-May Shootout in Owasso, hosted by Owasso Premier Softball.

“Well, to be honest with you, the biggest thing was just the people that were reaching out were just so ready to play,” Owasso Premier Softball President Jace Sanchez said. “There were other people — other organizations and stuff — that are allowed to be open. Since Owasso’s following the guidelines of Governor Stitt, we were allowed to open up our park with extra safety precautions and stuff.

“There was such a need to play that people were kind of looking for a place to go, and we figured if we’re allowed to play and we’re going to take safety measures, why not play in Owasso?”

It was raining as Sanchez talked to the Tulsa World for a phone interview Tuesday, making him worried the start of the season was going to be delayed another week. This is Sanchez’s first season serving as the organization’s president, and rain delays were a situation he was prepared to handle, but he never imagined preparing the softball complex for the return from a pandemic.

Precautions at this weekend’s tournament include no admission at the gate (admission will be online only to avoid the exchange of money), enforced social distancing for those in attendance, sanitizing equipment more often, including wiping down the ball and bats frequently, one umpire behind the mound instead of using two umpires with one behind the catcher, and no sunflower seeds allowed.

“Just having that ability to open it up to maybe give people some relief from all the stress that’s been built up over sitting at home or doing the same old routine every day, I feel like it’s important for us to just give that opportunity,” Sanchez said. “From there we can go on with whatever has to happen. We’ll play as many games as we can; we’ll have as many teams as we can, following our guidelines and stuff. Just giving people the opportunity to play is what I find intriguing about it.”

Although Phase 2 starts Friday, the first known sporting event in Tulsa happened a week before. The Osage Hotel and Casino Tulsa Raceway Park hosted the Throw Down in T-Town drag races on Friday and Saturday. Track co-owner and operator Todd Martin said they received a letter from the Tulsa Mayor’s Office that gave the track permission to race last weekend.

“It was a big deal,” Martin said about receiving the letter. “We had some contingency plans, but the main thing is to get the spectators and them inside the facility, and they really, really did a good job complying. I was real happy with the way that they were complying with what we were asking them to do.”

Tulsa Raceway Park was able to open May 1 through Phase 1 because racetracks, like rodeos, are treated as an entertainment venue, such as a movie theater, rather than a sporting venue, by the state.

“Please note that racing is considered their business, not a special event permitted by the City of Tulsa,” the city of Tulsa’s Director of Communications Michelle Brooks said in an email.

Martin wouldn’t release an attendance number for the event but said there were 184 racing teams that competed. Martin did say, though, attendance was lower than usual because they had to reduce the number of people they could have at the venue. There is no attendance limit specified in Phase 1 for entertainment venues.

Martin also said they sanitized bleachers after each night and cleaned bathrooms every 30 minutes instead of every hour. Racers received their times digitally instead of on a time slip, tickets were only pre-sell, spectators sat every other row, and there were hand-washing stations throughout the facility.

Tulsa Raceway Park has an event scheduled for this weekend, as well.

Just said if businesses or organizations aren’t adhering to the state’s guidelines, the city of Tulsa can enforce those guidelines based on THD and city health nuisance laws.

“As we continue to move through all the phases, it’s crucial that people continue to follow social-distancing guidelines to avoid another surge to our hospital systems,” Just said. “Social distancing remains our best defense against COVID-19.”

Gallery: Throw Down in T-Town at Tulsa Raceway Park

A car races down the track while fans watch during the Throw Down in T-Town at Tulsa Raceway Park in Tulsa on Saturday. IAN MAULE/Tulsa World

Donnie Brooks of St. Louis walks into a trailer while working on his cars during the Throw Down in T-Town at Tulsa Raceway Park in Tulsa on Saturday. IAN MAULE/Tulsa World

A pit crew puts rubber into a burning barrel while doing track maintenance during the Throw Down in T-Town at Tulsa Raceway Park in Tulsa on Saturday. IAN MAULE/Tulsa World