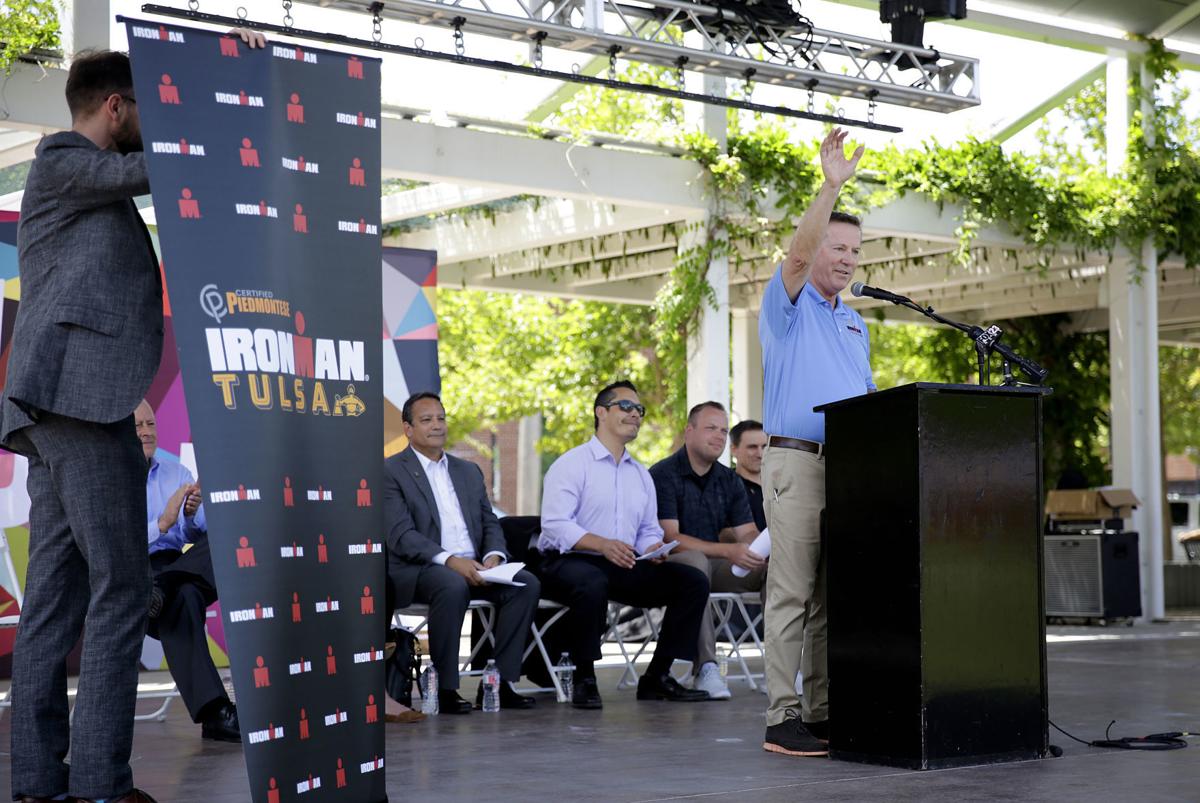 Ray Hoyt announces that Tulsa was selected as a host for an upcoming IRONMAN triathlon on June 12, 2019. MIKE SIMONS/Tulsa World 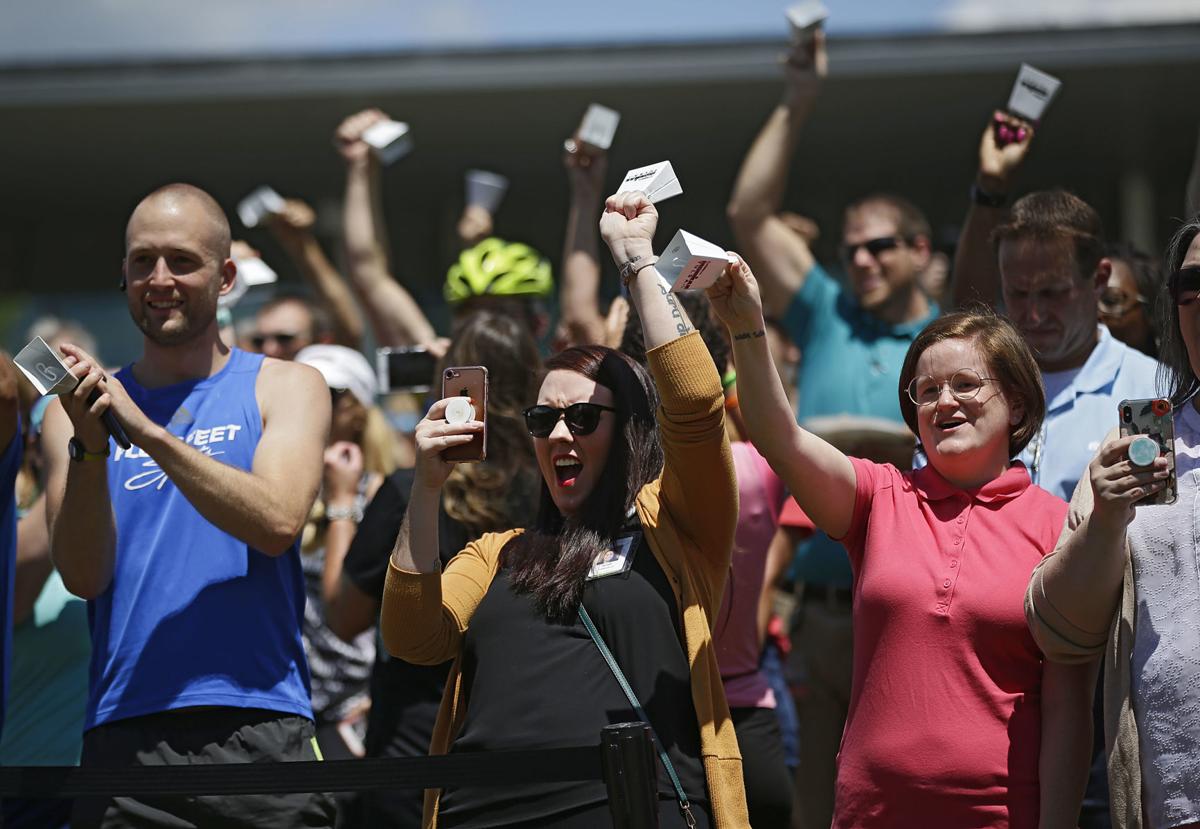 Candace Kraft of the Tulsa Regional Chamber and others cheer as it is announced that Tulsa was selected as a host for an upcoming IRONMAN triathlon Wednesday, June 12, 2019. MIKE SIMONS/Tulsa World 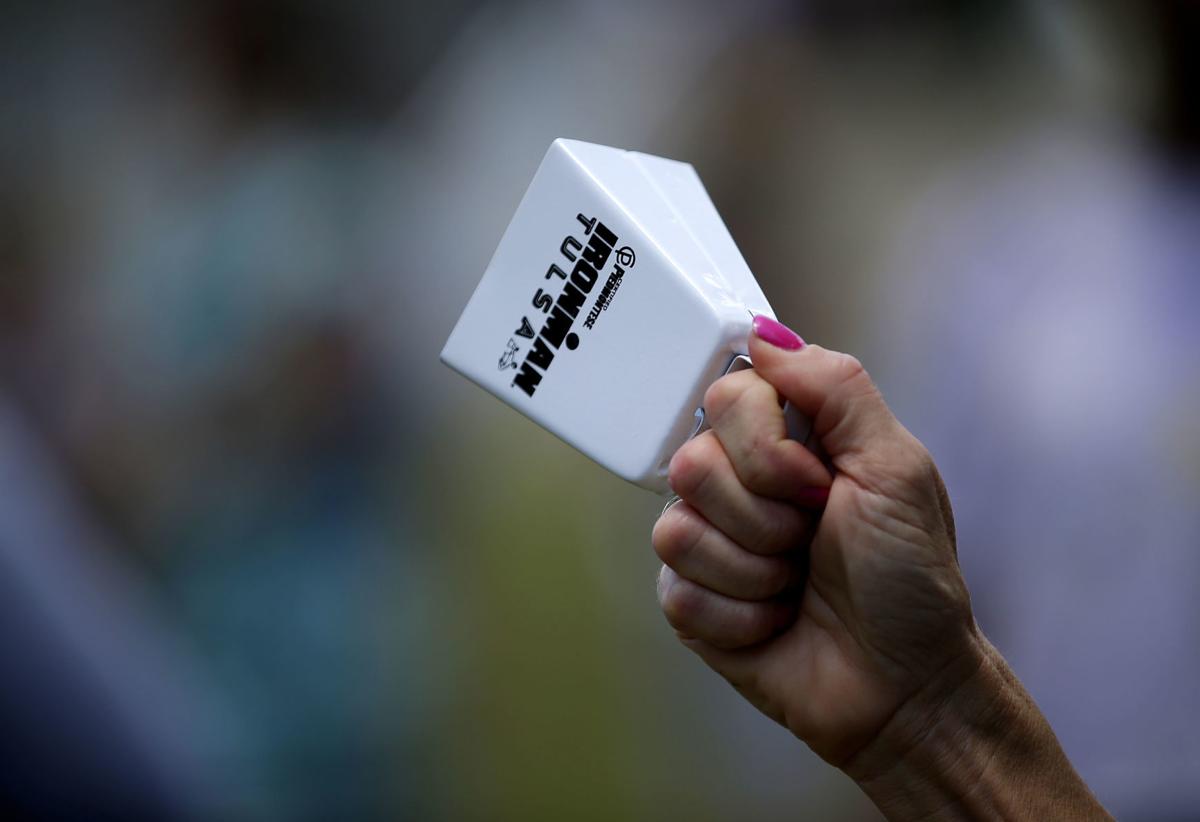 An audience member shakes a cowbell during an announcement that Tulsa is selected as a host for an upcoming IRONMAN triathlon Wednesday, June 12, 2019. MIKE SIMONS/Tulsa World 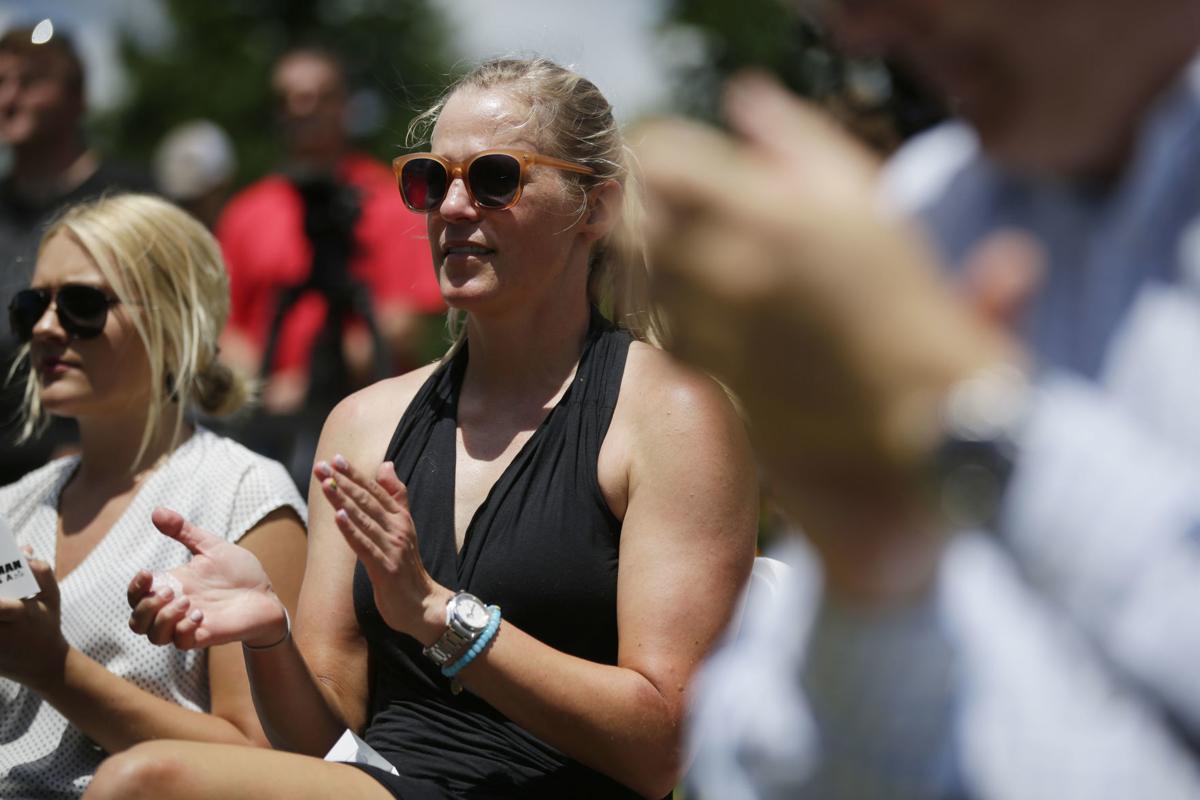 Professional Ironman athlete Jessica Jones-Meyer applauds during an announcement that Tulsa had been selected as a host for the 2020-22 triathlons. MIKE SIMONS/Tulsa World file

Tulsa will play host to the latest IRONMAN triathlon to be introduced to the organization’s slate of endurance events in May 2020, city and IRONMAN officials announced in front of a crowd of 200-plus in a ceremony at Guthrie Green on Wednesday.

Selected as one of four finalist cities in April, Tulsa now joins an exclusive group of 40 IRONMAN host cities worldwide, beating out competing bids from Fayetteville, Arkansas; Des Moines, Iowa, and Memphis, Tennessee, for the opportunity to hold the organization’s new, full-distance race. The three-year deal, executed by the city’s convention and visitors bureau and President of Tulsa Regional Tourism Ray Hoyt, plants the triathlon in Tulsa for 2021 and 2022, as well, and leaves open the possibility for long-term agreements in the future.

“This was a highly competitive process between our four finalist cities,” IRONMAN Chief Operating Officer Shane Facteau said. “But what stood out about Tulsa was that it could offer more to our athletes than just a place to compete. The cultural differences that make up this city was important to us, and was an important part of what we were looking for heading into 2020.”

The competition that will come to Tulsa on May 31 will be IRONMAN’s first new North American event since 2014 with more than 2,500 athletes expected to attend. The inaugural full-distance event will feature 2.4 miles of swimming, 112 miles on a bike and a full, 26.2-mile marathon, all set to run through the city and its surrounding areas.

While the official course has yet to be finalized, many of the pivotal points that will structure the event have been set.

The swimming portion of the competition will take place in Keystone Lake before transitioning into the second leg where competitors will cycle up and through Osage, Creek and Tulsa counties. The final transition, from cycling into the marathon, is expected to take place on Oklahoma State University’s Tulsa campus. The 26.2-mile race will run through downtown toward Southwest Boulevard and continue on Riverside Drive before finishing in the Tulsa Arts District.

“Constructing the course to fit IRONMAN standards was one of the more challenging processes we’ve ever had in making a bid,” Hoyt said. “It’s not just a marathon. It’s not just a 100-plus mile bike ride. And it’s not just a 2.4 mile swim. It’s all of those rolled into one.”

The operating budget for the event, according to Hoyt, is expected to be well over $1.2 million, but hosting the competition also presents Tulsa with a substantial potential economic boon.

Past host cities have reported between $10 million to $13 million in economic impact over the three or four days which span a typical IRONMAN event. With thousands of visitors expected to flow into Tulsa next May, the city estimates 12,000 hotel rooms will be booked with those visitors subsequently flooding toward local businesses and restaurants in nearby areas.

Starting next spring the endurance competition will join postseason action for high school athletics as well as Oklahoma, Oklahoma State and Tulsa sports and the Saint Francis Tulsa Tough cycling races as part of the slate of local events that comprise a busy sports schedule in the area over the months of April, May and June.

IRONMAN’s decision to come to Tulsa also introduces a potential landmark stretch in 2021 in which Tulsa will host the Senior PGA Championship at Southern Hills Country Club, the second edition of the IRONMAN event and finally the 16th running of Tulsa Tough all in a matter of three weeks.

Yet even thrown into the mix of all that goes on around Tulsa during the spring months, IRONMAN officials feel confident their competition will quickly emerge as its own stand-out event.

In attendance among the city and IRONMAN officials Wednesday was professional triathlete and three-time IRONMAN champion Jessica Jones Meyers. The local competitor moved to Tulsa in 2007 and trains in the surrounding area, and said Wednesday it was surreal to find out IRONMAN would be bringing its newest event to her adopted city.

On top of her excitement at the prospect of being able to compete next year in her own backyard, Meyers also views IRONMAN’s descent into Tulsa as an opportunity to introduce the uninitiated to her sport and hopefully grow its following around the region and the country. To her, the city’s embrace of Tulsa Tough, the annual cycling race, gives her confidence Tulsans will embrace the new endurance event with the same fervor.

“IRONMAN is magical,” Meyers said. “The buzz that surrounds it is something you can’t quite ever put your finger on until you experience it. I’ve always thought Tulsa would be a great place for an event like this, but I never thought it would happen.”

“I think this community is just going to be stoked when it all goes down next May.”

A three-year deal will have the IRONMAN triathlon in Tulsa through 2022 and sets up a historic three-week stretch in the spring of 2021.

Ray Hoyt announces that Tulsa was selected as a host for an upcoming IRONMAN triathlon on June 12, 2019. MIKE SIMONS/Tulsa World

Candace Kraft of the Tulsa Regional Chamber and others cheer as it is announced that Tulsa was selected as a host for an upcoming IRONMAN triathlon Wednesday, June 12, 2019. MIKE SIMONS/Tulsa World

An audience member shakes a cowbell during an announcement that Tulsa is selected as a host for an upcoming IRONMAN triathlon Wednesday, June 12, 2019. MIKE SIMONS/Tulsa World

Professional Ironman athlete Jessica Jones-Meyer applauds during an announcement that Tulsa had been selected as a host for the 2020-22 triathlons. MIKE SIMONS/Tulsa World file