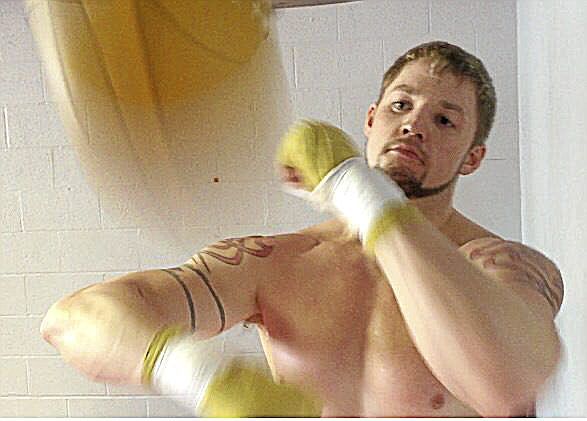 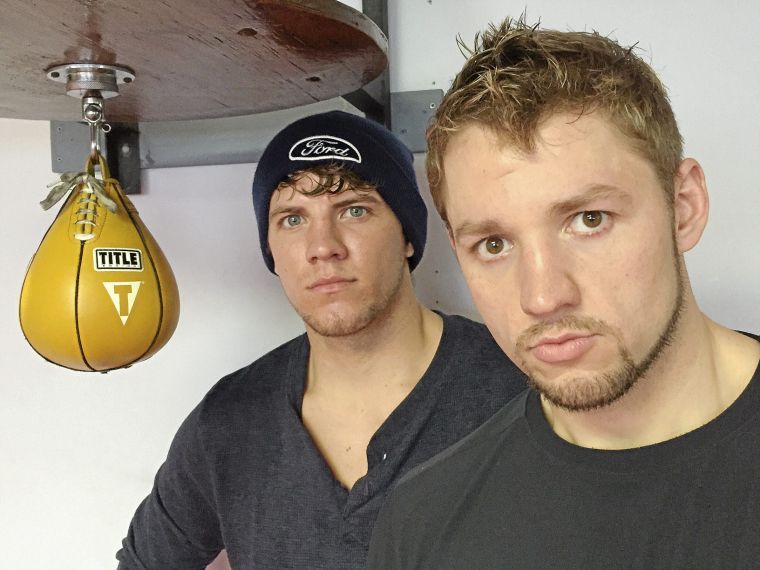 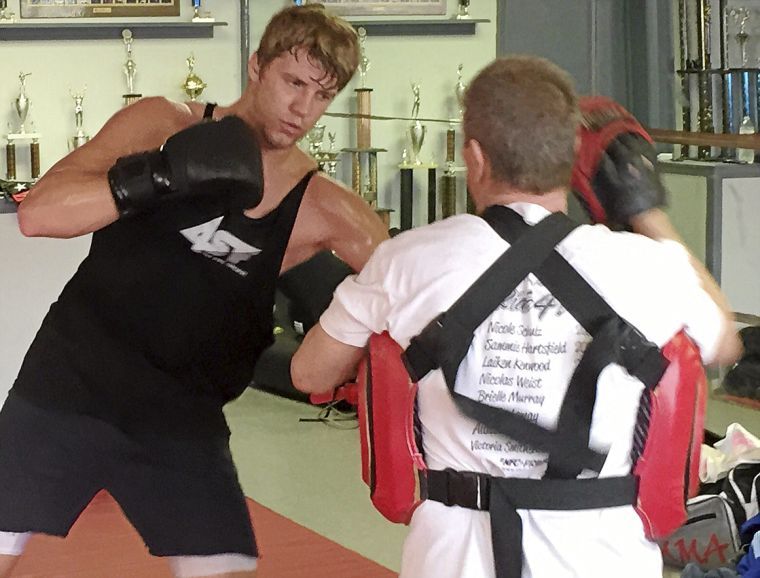 In advance of his fourth professional fight, Kenzie Morrison trains at the Rouse Gym in Bartlesville. BILL HAISTEN/Tulsa World

When he played basketball at Jay High School, his name was Kenzie Witt. As of next week, when he finalizes the process of legally changing his name, he will be known as Kenzie Morrison — a son of Tommy Morrison.

When Kenzie’s half-brother, Trey, was a Vinita High School football player and a University of Central Arkansas defensive end, his name was Trey Lippe. When Trey became a prizefighter last year, he added Morrison to his name. He now is known as Trey Lippe Morrison — a son of Tommy Morrison.

Kenzie and Trey have different mothers and are separated in age by only 10 months.

As toddlers, Kenzie and Trey were playmates.

As teens, they were friends.

Now, they are united in their drive to sustain a Morrison presence in the heavyweight division of professional boxing.

“We always grew up doing sports and playing against each other,” Trey said of his relationship with Kenzie. “Boxing had nothing to do with it. Boxing brought us together after my dad passed.

“We thought it would be nice for ourselves — (and) to honor (Tommy’s) name — to give it a shot, and we came together again with the whole boxing thing.”

When Tommy was 24, he defeated George Foreman and became the only Oklahoman to have captured a world heavyweight title. After Tommy’s death in 2013, Trey made the decision to give the fight game a try. Kenzie had tinkered with the sport since 2009, and last year he became a professional.

“My dad always wanted me to change my name. It nagged at me,” Kenzie said. “Before my first fight in July, my mom showed me a stack of letters that he wrote when he was in prison. I read through them and it was kind of emotional — right after he passed away.

“He said to me and Trey that one day, his name would be important to us. I thought about it, and then I started fighting professionally, and then I thought it was the right thing to do — to change my name. I was worried what my family would think. I’ve been a Witt all my life. I just felt like my dad deserved for me to have his last name.”

During an already sold-out show scheduled for Saturday night at the Buffalo Run Casino in Miami, Oklahoma, each of the Morrison boys takes another career step.

The 25-year-old Trey, now a Tulsa resident, is unbeaten in six fights. On Saturday, he will be matched against 33-year-old Richard Dawson of Okmulgee.

Tommy Morrison was a knockout artist, and so is Trey. In six contests thus far, Trey fought only seven rounds (10 minutes, 20 seconds of actual fight time). Dawson has a 5-2-2 record and is the veteran of 33 professional rounds.

The 24-year-old Kenzie, who resides and trains now in Bartlesville, is 3-0 and faces a 35-year-old opponent — Brian Imes of Springfield, Missouri. Imes is fighting for the first time in 16 months.

“It was one of my dad’s dreams to get us involved in boxing,” Trey said. “He wanted us to do it at a much younger age, but we had other sports. By the time we were able to do it, it was kind of too late for him. He was gone. But if he was at the fights (on Saturday), he would be real happy. Anxious and scared at the same time. He would probably feel like he was walking out for his own fight.”

Trey and Kenzie are promoted by Tony Holden, who during the ‘90s was Tommy Morrison’s promoter. When Holden was married in 1990, Morrison was the best man.

Until approached by Trey in 2013, Holden hadn’t promoted individual fighters since 2008.

“If Kenzie and Trey weren’t Tommy’s sons, I wouldn’t be doing this,” Holden said. “Trey moves like his dad, fights like his dad and even laughs like his dad. It’s bizarre, how much Trey and Tommy are alike. And then Kenzie – he looks just like the young Tommy.”

Said Kenzie: “People say that if you put Trey and me together, it would look exactly like Tommy Morrison.”

“We’ve had all types of entertainment at the casino, but these boxing shows with Trey — and now with Trey and Kenzie — sell out way faster than any other event,” Holden said. “This show was sold out really before we even made a public announcement about it. The Morrison name has a great drawing power.”

After his high school graduation in 2009, Kenzie moved to Wichita, Kansas, and moved into the home of Tommy Morrison.

“He was putting together a gym at the time,” Kenzie recalled, “and sometimes I would punch a bag a little. He showed me a few things, I caught on pretty quick and that led to working with mitts and sparring. He was like, ‘Man, you really can do this.’ Through his confidence in me, I figured I would give it a shot.

“I had a hard time finding a handler, and I contacted Tony Holden and (Bartlesville-based trainer) Randy Rouse. Tony cares about me and Trey. He won’t try to capitalize on the Morrison name. Boxing can be evil. Tony and Randy are good people.”

Trey’s bout is the Saturday main event. He is attempting to become a relevant heavyweight in spite of having had no amateur experience. He has been exposed to boxing training and conditioning for less than two years.

Of his clash with Dawson, Trey said, “It’s going to be a big step up for me. I have to deal with a (more) experienced boxer. I’m looking forward to testing myself, and he should be a great test.”

Only 55 weeks have passed since Trey’s first fight, and Holden says he marvels at the progress achieved.

“Trey is developing so fast. He’s starting to look like a fighter. A dangerous fighter,” Holden said. “Kenzie is a completely different type of fighter. He uses his jab and likes to box. He’s a very natural athlete.

“Trey is a freight train. He’s the perfect model of a prospect heavyweight. He’s got size, power and a great work ethic. His natural ability is coming out now. You can’t teach power. Trey is a powerful heavyweight.”

OU, Clemson and LSU were Daniels' other finalists when he committed to Texas A&M last summer.

Guerin Emig: Cade Cunningham reaches peak in Bedlam, reminds us how captivating he can make March

In advance of his fourth professional fight, Kenzie Morrison trains at the Rouse Gym in Bartlesville. BILL HAISTEN/Tulsa World