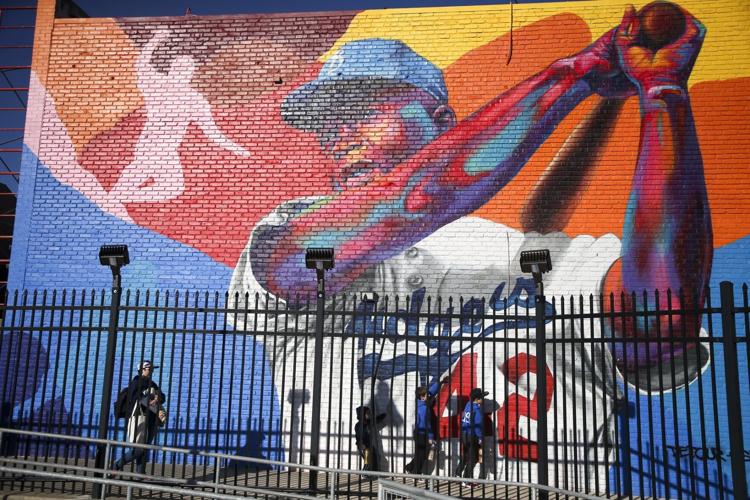 Tulsa Drillers fans walk past mural of Jackie Robinson before the Tulsa Drillers season opener against the Amarillo Sod Poodles at ONEOK Field on May 4. 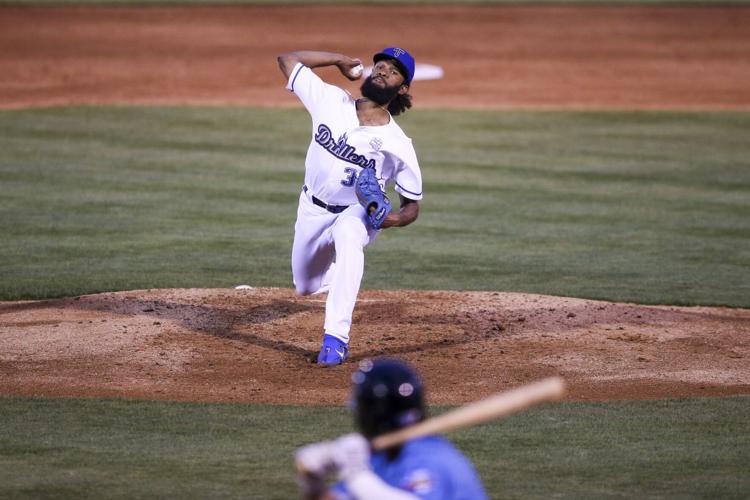 Tulsa Drillers pitcher Andre Jackson said “You don’t think about stats when you hear ‘Jackie Robinson.’ You try to live up to that name.”

With all of the attention on Greenwood this week for reasons as important as they are obvious, I am drawn to the Jackie Robinson mural overlooking left field at ONEOK Field.

It is beautiful and enlightening, a work of art that binds atrocities of the past — the Race Massacre that devastated Tulsa’s Black Wall Street on one side of the mural, racial prejudice that poisoned inclusion in sports and other societal endeavors on the other — with reckoning in the present and hope for the future.

It is what the Tulsa Drillers, who play in a stadium sandwiched between Greenwood and John Hope Franklin Reconciliation Park, and the Greenwood Chamber of Commerce had in mind when they unveiled mural plans last February.

Hopefully Greenwood passers-by dig especially deep this week as they pay respects to the Race Massacre’s 100-year anniversary and to the man celebrated in the 26-by-40-foot painting.

It seems a good time to find meaning in the mural, in Robinson, with one of the Drillers themselves.

“When you get drafted by the Dodgers, you start thinking about guys the Dodgers have had in their history. For me that starts with Jackie Robinson,” Jackson says. “You definitely want to live up to the type of man he was. You don’t think about stats when you hear ‘Jackie Robinson.’ You try to live up to that name. Being a good teammate, picking a guy up next to you, diversity, all those different things... It all comes down to character. You know what I mean?

“I would love to be a Hall of Famer. I would love for that to be part of my legacy. But I think the biggest thing is leaving a mark on people’s lives. I think that’s what Jackie encompasses, especially being a Dodger. A guy that changed the game on and off the field while going through stuff that people can’t even fathom. I can’t fathom.

“There’s probably no right answer to what he means to me, for anybody. But I think that living up to those morals and that character is kind of the big thing.”

Jackson doesn’t recite Robinson’s life story — he leaves those details to his dad, the family baseball historian – but he knows of who he speaks. He knows the best way to pay tribute is by his own morals and character.

He starts by recognizing something critical.

“I grew up in Tucson, Arizona. My favorite players were Chris Young, Justin Upton and Orlando Hudson,” Jackson says. “At the time I guess I didn’t realize why, but now I look back and they were the only guys that looked like me on the field. I’d look at what those guys were doing and want to play the game they were playing.

“The responsibility for me now? Do I feel like I’m a role model? I’d be naïve to think that I’m not. A young Black kid sees me in the stands and is like, ‘Whoa, that guy looks like me.’”

It can be life-altering when you consider African-American participation in Major League Baseball sags around 7 percent.

Jackson’s response to baseball’s inclusion gap is to try to narrow it, not lament it. He says he has had conversations with Dodgers front office representatives.

“Trying to figure out, ‘Is there a problem? Can we do better’ and that kind of thing,” he says. “That’s something where every organization should reach out, not just Jackie’s.”

Jackson promotes The Players Alliance, an organization of African-American ballplayers committed to fostering both racial equality and baseball opportunity in Black communities.

“Guys like Curtis Granderson and CC Sabathia (Players Alliance president and vice president) are taking the initiative to stop talking about it and saying, ‘You know what, we’re gonna do something about this,’” Jackson says.

Back in the Drillers clubhouse, meanwhile?

“I genuinely prefer to have an interpersonal conversation so things don’t get misconstrued,” Jackson says. “That’s more of my responsibility, to try to take the objective route and just try to listen. Whether it’s a white teammate, a Black teammate, a Latino teammate, whatever. Try to understand before I put my two cents out there.”

God knows we need to hear and understand each other right now. That feels especially significant in Tulsa this week.

Jackson and the Drillers won’t be here. They are on a road trip, leaving ONEOK Field to activities commemorating the Race Massacre centennial.

We should all visit Greenwood in the coming days, see the murals and historical markers and do some long, hard thinking about our past, present and future.

We should stop and look up to Jackie Robinson, think of Andre Jackson and look inward at our own morals and character.

Deshaun Watson is suspended and fined after settlement between NFL, NFLPA

Tulsa Drillers fans walk past mural of Jackie Robinson before the Tulsa Drillers season opener against the Amarillo Sod Poodles at ONEOK Field on May 4.

Tulsa Drillers pitcher Andre Jackson said “You don’t think about stats when you hear ‘Jackie Robinson.’ You try to live up to that name.”