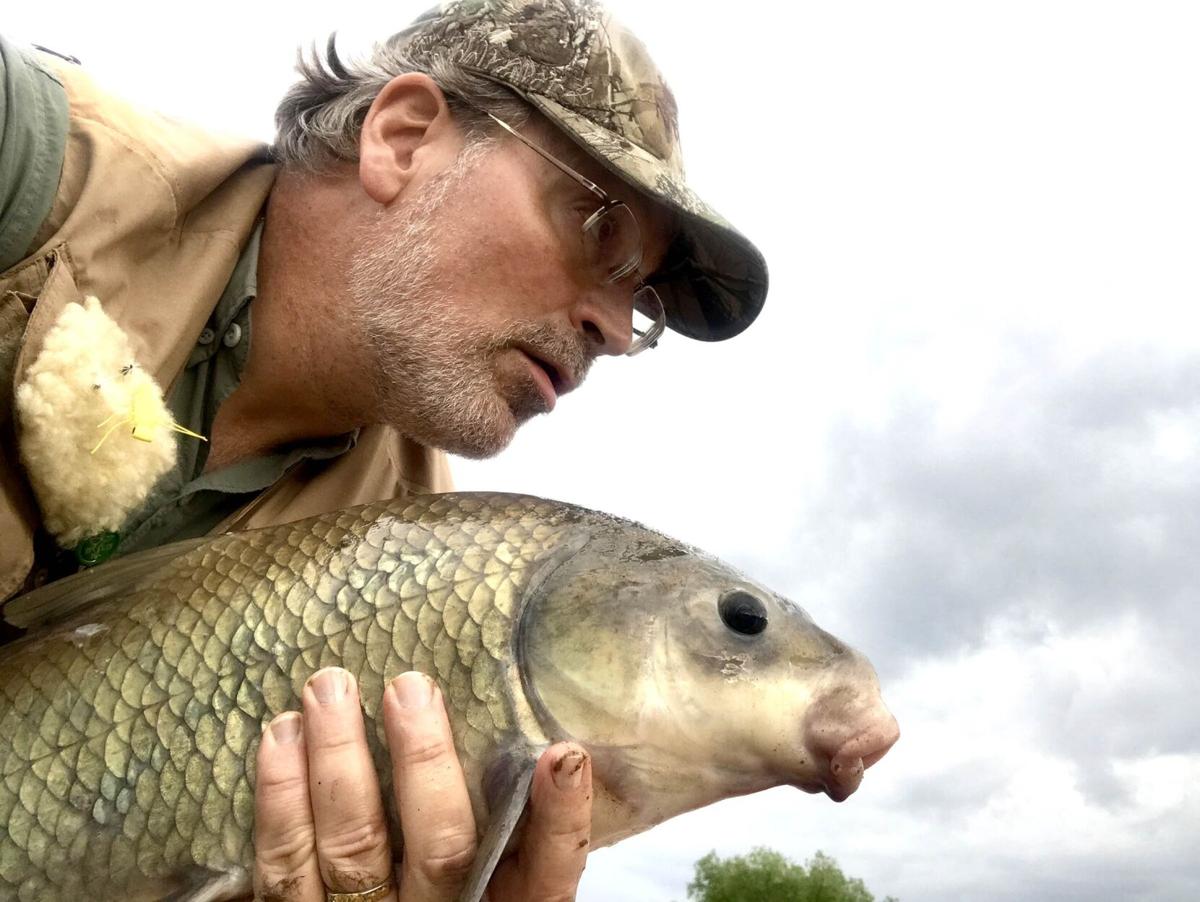 Tulsa World outdoors writer Kelly Bostian mugs with a smallmouth buffalo, one of 19 species he reeled in during the Trout Unlimited Chapter 420 All Fish All Oklahoma Fly-Fishing Challenge. 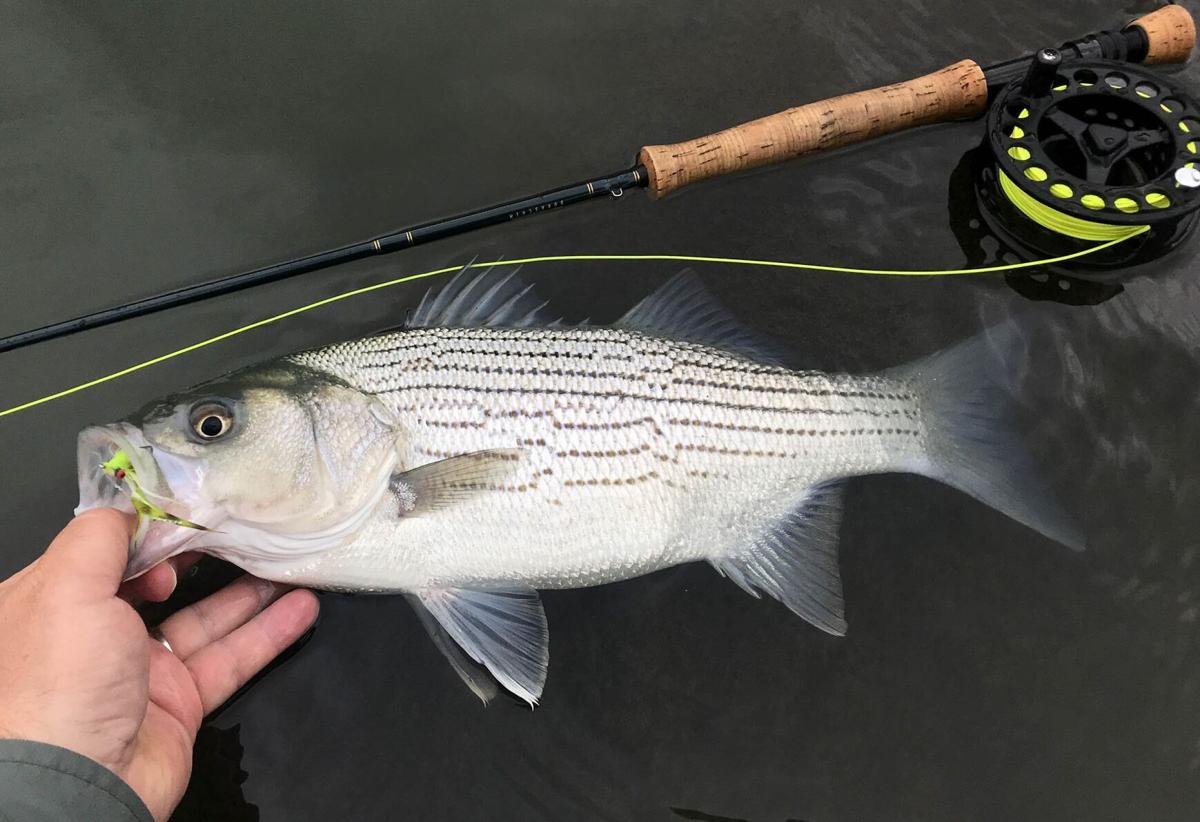 A Lower Illinois River hybrid striped bass hit a Clouser streamer, one of 19 species Kelly Bostian reeled in during the Trout Unlimited Chapter 420 All Fish All Oklahoma Fly Fishing Challenge. 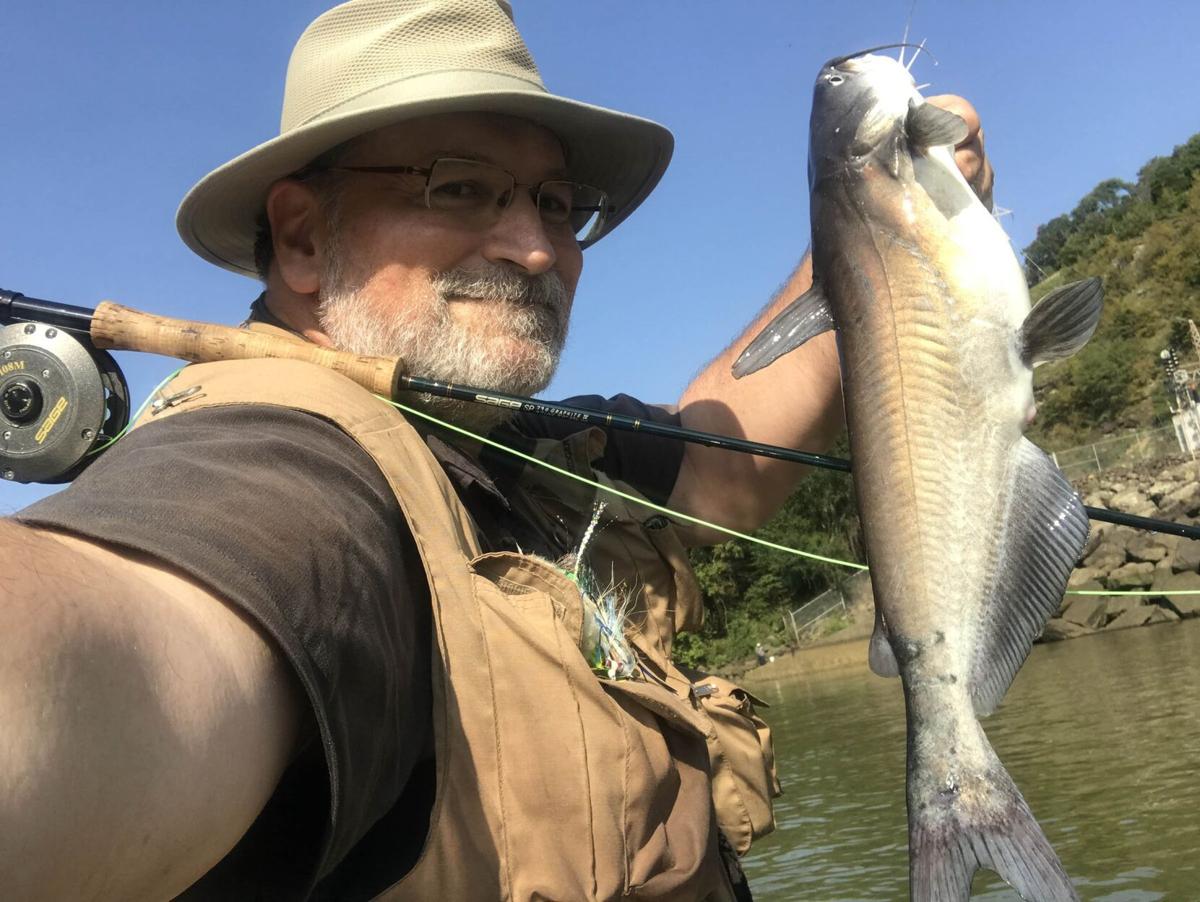 At midnight, I finally let the weight of my arms and my fly rod rest at my side. It was the end of a perspective-changing ride, and I closed my eyes a moment to soak in the silence.

Then, looking up, I appreciated the rise of a deep-red waning gibbous moon growing bolder in the purple sky over the black outline of the nearby timber.

Near my waist, my U/V headlamp showed a neon yellow popper and glowing blue line wrapped around the heads of pond-side sedge, the result of one last careless back-cast.

I smiled at the tangle, took a photo to mark the occasion, nipped off the fly so I could skip the detangling job and reeled up my line at the final deadline of the Trout Unlimited 420 Chapter’s 15-week, 15-fish, 2020 All Fish All Oklahoma Fly-Fishing Challenge.

Perhaps in response to the whirring of my old spring-and-pawl Sage reel, leopard frogs around the pond suddenly erupted in loud chortling.

It lasted for just for a minute and they fell silent again, like a crowd that stirred briefly to mock a bombing comedian with fake laughs.

“Well, that was trippy,” I said into the stillness.

I entered the 15-week challenge to catch 15 Oklahoma fish species on a fly rod this summer with an eye toward fun and education.

The result for me was an experience of changed perspective on fly fishing and also, like most things outdoors, little things along the way that will endure in my memory.

In all, counting the accidental snagging of a paddlefish that technically didn’t count, I reeled in 19 species on a fly rod this summer. I landed largemouth, smallmouth and Kentucky-spotted bass; white, hybrid and striped bass; longear, redear, bluegill and green sunfish; white and black crappie (although the contest officially just lists “crappie”); channel and blue catfish; buffalo, redspot chub, freshwater drum and, of course, rainbow trout.

Other “wild card” fish listed in the challenge included gar, common carp, warmouth, brown trout and flathead catfish. I think every one of those fish species ended up being caught by at least one of the anglers.

I didn’t land a big-fish prize, but I did land some nice fish. The 11-inch Neosho smallmouth caught on my 3-weight fly rod on Spring Creek may sound small, but for a native Neosho in that spot, it was a real trophy.

A 15.25-inch rainbow trout that slurped a hopper off the surface at a private stream at sunset fought like a much larger fish and had me whooping. An 18.5-inch largemouth that inhaled a popper in no more than 12 inches of water on one sultry summer sunrise was a genuine heart-stopper.

The 23-inch buffalo that slurped up one of my nymph flies as it pooled with about 20 of its friends in a shallow, clear pool of the Arkansas River near Bixby has to rank as the most exciting hook-set. The entire pool exploded in a white froth as I reared back on the line and every fish bolted. My reel sang, the fly-line burned across my fingers and it looked, and felt, as if I’d hooked every fish in there.

I do wish I had one big Lower Illinois River white bass back in hand to measure. At the time I caught it I was focused on adding a hybrid striped bass to my tally. I was disappointed this bigger fish I thought was a hybrid turned out to be a sand bass when I got it to hand.

It was a pretty specimen, so I took a couple photos. Later I looked at that photo and realized the leading white bass was 16.25 inches and that one might have been close to, if not a hair over, that mark. Dang it.

Big-fish bragging rights in the contest will go to Randall Gradwohl with an 18.5-inch rainbow trout, Bruce Burton with a 20.5-inch largemouth and Russell Vaughn with a 28.25-inch striped bass.

Regular readers might recall I declared a jinx on fishing guide Donavan Clary as I entered the contest. Last year he took four of the six big-fish categories in the contest. I think the #anyonebutclary jinx worked its magic.

This year he only took three.

He logged a 9-inch bluegill, 20-inch smallmouth bass and he had that 16.25-inch white bass. Dang it.

The final leaderboard shows 13 individuals and eight four-person teams completed the 15-species challenge. Prize drawings for the winners will happen at the Trout Unlimited chapter’s annual dinner on Thursday, but, as I noted, this contest was not about the prizes.

I’ve reconnected with fly-fishing well beyond the trout stream, and that is a major shift.

I’ll never forget the outline of a giant largemouth leaping so high it was horizontal above the water, silhouetted in the sunrise, as it engulfed one of my poppers.

Introducing Mason May, a fifth-grader and the youngest entrant to complete the 15-fish challenge, to Spring Creek was a different kind of memory-maker.

What a joy it was to wade into that clear, cold creek at sunrise and introduce his father, Brad, and the young angler — already a skilled stick — to what is one of Oklahoma’s sweetest streams.

The beauty of the plentiful longear sunfish in Spring Creek fought on my slender 3-weight rod competes in my mind with the many (oh, so many) farm-pond hybrid sunfish and green sunfish that absolutely whacked streamers and surface flies and repeatedly teased me with the idea I had caught the biggest bluegill of the contest.

I dream now about striped bass so big they threaten to strip the rod out of my hands.

One morning, a white-tailed deer fawn walked right up to Scott Hood and I as we fished. Its mother “blew” to let us know her displeasure from across the creek.

I enjoyed a whistling contest with a bald eagle that flew in closer to check me out one morning. I watched an osprey pluck a shad from the water not 20 yards from where I stood on another day.

And I’ll remember that marathon contest-ending psychedelic moon rise and the singing frogs.

I really wonder what got into those frogs.

Organizers already are planning a third annual All Oklahoma All Fly-Fishing Challenge for 15 weekends in 2021, Memorial Day through Labor Day.

To learn more about the contest find the Trout Unlimited Oklahoma Chapter 420/Tulsa Flyfishers group on Facebook or go to the chapter's web site at tu420.com.

Gallery: 19 Oklahoma fish species caught on a fly rod. Can you ID them?

Learn how Outdoors Writer Kelly Bostian caught a close-to-home meal in an hour after work one evening to make a nice lunch for the next day.

Tulsa World outdoors writer Kelly Bostian mugs with a smallmouth buffalo, one of 19 species he reeled in during the Trout Unlimited Chapter 420 All Fish All Oklahoma Fly-Fishing Challenge.

A Lower Illinois River hybrid striped bass hit a Clouser streamer, one of 19 species Kelly Bostian reeled in during the Trout Unlimited Chapter 420 All Fish All Oklahoma Fly Fishing Challenge.