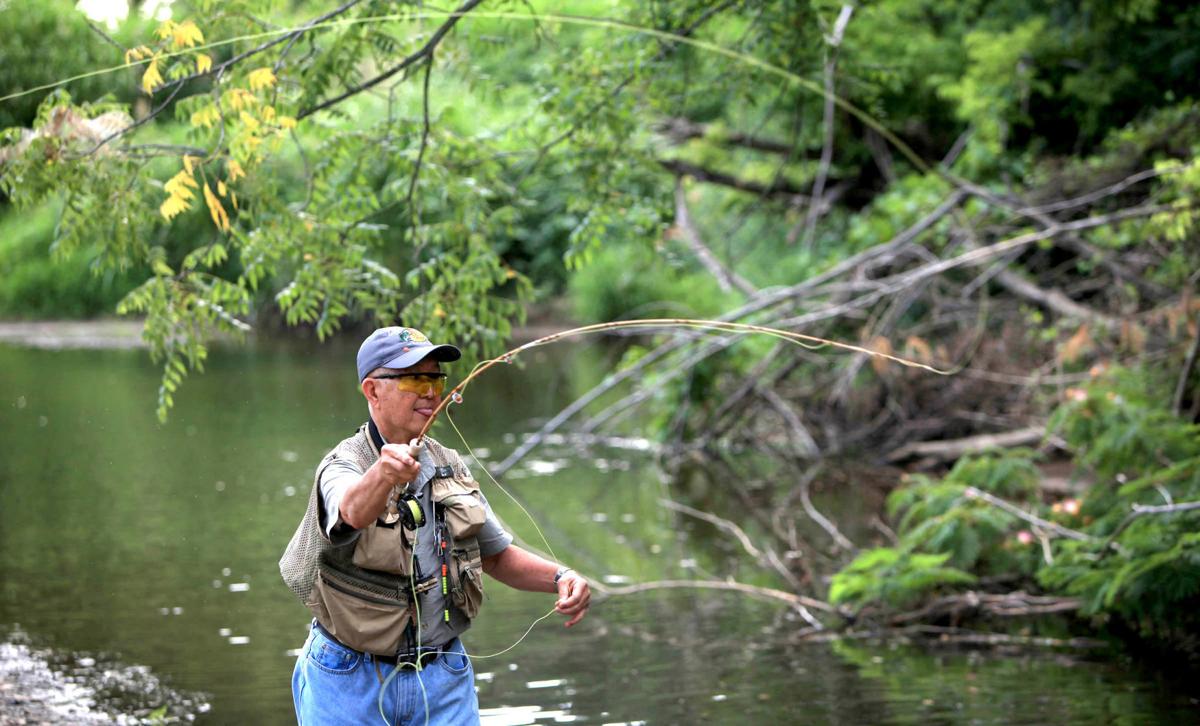 One of David Chin’s custom fly rods is decorated with a painting of a fly and his name in English and Chinese. KELLY BOSTIAN/Tulsa World 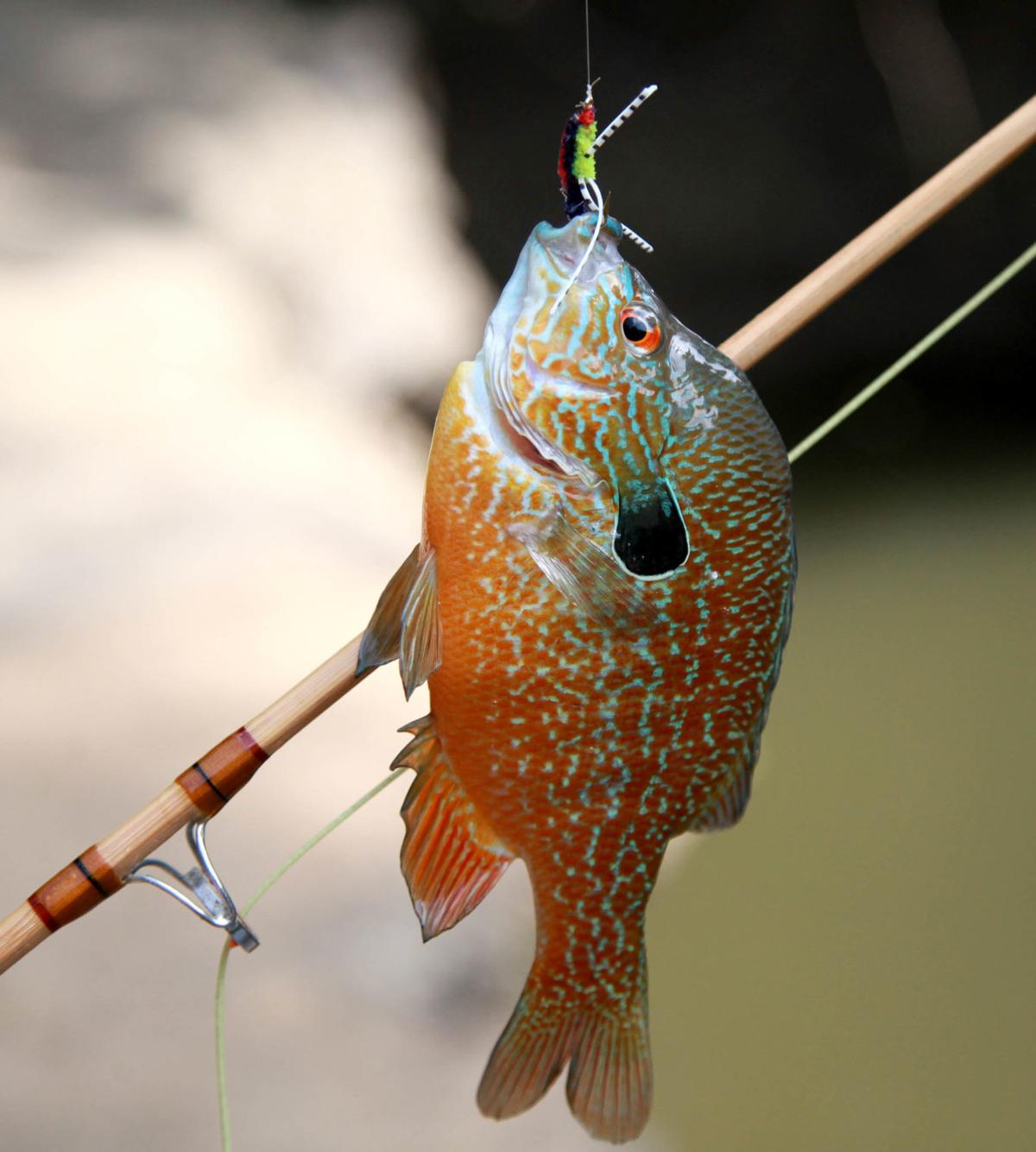 A long-eared sunfish caught by David Chin on one of his spider flies on Adams Creek near his home in Broken Arrow. KELLY BOSTIAN/Tulsa World

One of David Chin’s custom fly rods is decorated with a painting of a fly and his name in English and Chinese. KELLY BOSTIAN/Tulsa World

A long-eared sunfish caught by David Chin on one of his spider flies on Adams Creek near his home in Broken Arrow. KELLY BOSTIAN/Tulsa World

David Chin began his regular early-morning routine on Adams Creek with water up to his rubber-booted ankles and a deeper pool ahead that bore a variety of sunfish and largemouth bass.

The 80-year-old native of Malaysia narrated how the morning would go as he worked a fly line through his hands, smooth as a silk thread and gliding silently through the heavy summer morning air.

“I’ll fish this pool and you can take pictures until you get what you need,” he said. “Then you will fish.”

Wait a minute, that’s not how this was supposed to go.

He was the artist with his own custom Tonkin bamboo flyrods and hand-tied flies, I was just going to be the photographer.

I should have known better.

Bass Pro Shops manager Chris Edwards introduced me to Chin, who is a part-time employee in the fly-fishing section, the night before. He said I needed to meet and write about the man, who will turn 81 on Wednesday.

Before the Coronavirus pandemic hit, Chin taught regular fly-tying classes at the store in addition to the two days a week he lends his influence to the retail side.

“He’s the most humble human being I’ve ever met in my life,” Edwards texted to me. “He’s done more for people here in Bass Pro than anyone, ever.”

He warned me Chin is humble, not interested in a spotlight, and hopelessly generous. He listed Chin’s skills: “a master fly tier, painter, wood carver, taxidermist, master gardener, wildlife photographer, Tonkin bamboo fly rod maker, and so on.”

“Be prepared to say, ‘no,’” Edwards warned. “He’s going to find ways to give you things.”

Born in Malaysia when it was a British commonwealth, Chin said he always loved the outdoors and was a Queen’s Scout and scoutmaster in what is the British equivalent of the Boy Scouts.

When the British turned the country back to the Malays, Chin saw his future prospects fade and he left for the U.S. at the age of 27. He graduated from Harding University in Arkansas in 1962 and found a job in accounting for Bancroft Bag in West Monroe, Louisiana.

In 27 years at Bancroft he helped it through the transition to the digital world. He finished his career as an independent IBM programmer for private firms.

Chin made an impact in his free time, as well, in his 45 years in West Monroe. He and his wife, Nancy, moved to Broken Arrow three years ago to be closer to their daughter, who lives in Tulsa.

People can see examples of his art, flies and bamboo rods on his website at troutcommander.com, a name that is a nod to a young school teacher his wife worked with and with whom he used to guide duck hunters.

“I was lucky because (Bancroft) had a lot of businessmen that would come from other states and they wanted to hunt and fish,” Chin said. “We would hunt ducks and we would go fishing and catch a lot of bass.”

In his spare time, he made wooden carvings of ducks and wildlife etchings that he sold at craft shows. Many of his etchings and carvings still decorate banks, medical and law offices around West Monroe, Nancy said.

It was not until 1997, when one of his two sons left for college and he spent time on the Little Red River in Arkansas, that Chin fell in love with fly-fishing. As with gardening, wildlife photography and duck hunting, he was all-in.

To be all-in, tying your own flies is a must for fly fishermen. Chin has altered standard patterns and created his own designs.

“It’s relaxing,” he said of his fly tying efforts.

The artisan’s flair really shows in his fly rods, however. He has made 84 of the valuable rods and not sold one. He gives them away to family and friends.

“For every fly-fisherman the ultimate is to own a bamboo rod, but they’re so expensive,” he said. Just the hardware for one of his rods now costs about $300, he said. It takes 60 to 70 hours to make a rod, but he usually has several in progress at one time.

Each two-piece rod is a smooth hexagon shape with eyelets tied on with silk thread. Each piece is made of six identical lengths of bamboo carved to a perfect, tapered, equilateral triangle shape within a tolerance of 1/1000th of an inch. The six are thin as toothpicks at the tips. The outer bark of the bamboo remains untouched.

“It’s a beautiful sound,” he said of working shavings off the bamboo with the hand plane. “When the blade is sharp and you get it just right it’s, shhhhh, shhhh, shhhh. It’s wonderful,” he said.

His casts with the 6½-foot 2-weight rod on the creek that morning showed a blend of artist and craft. With efficient, smooth, effortless moves the fly line and floating parachute-style fly shot out, then fell to the water’s surface soft as a feather.

It took only two casts for an aggressive sunfish to appreciate the combination and rise to the occasion.

“Enough now?” he asked after he landed his eighth or ninth fish. “You have what you need?”

The artist was more than ready to leap from photo subject to teacher. He did it with joy, and talked through my casts and catches with appreciation as if he could feel the line and the smooth flex of that bamboo rod in his own hands.

It was indeed “the ultimate” that he promised.

We ran past our planned time. Chin had another hole he wanted me to fish, more instruction, more experience to share. A generous man.

As I prepared to leave, he apologized he didn’t have more flies tied up and started pulling flies from his own box to stack in a little plastic container for me to take home. He described the flies as I tried to slip in words of objection.

“Take these now and come by Bass Pro in a few days and I’ll have some more for you,” he said.

How could I possibly say no?