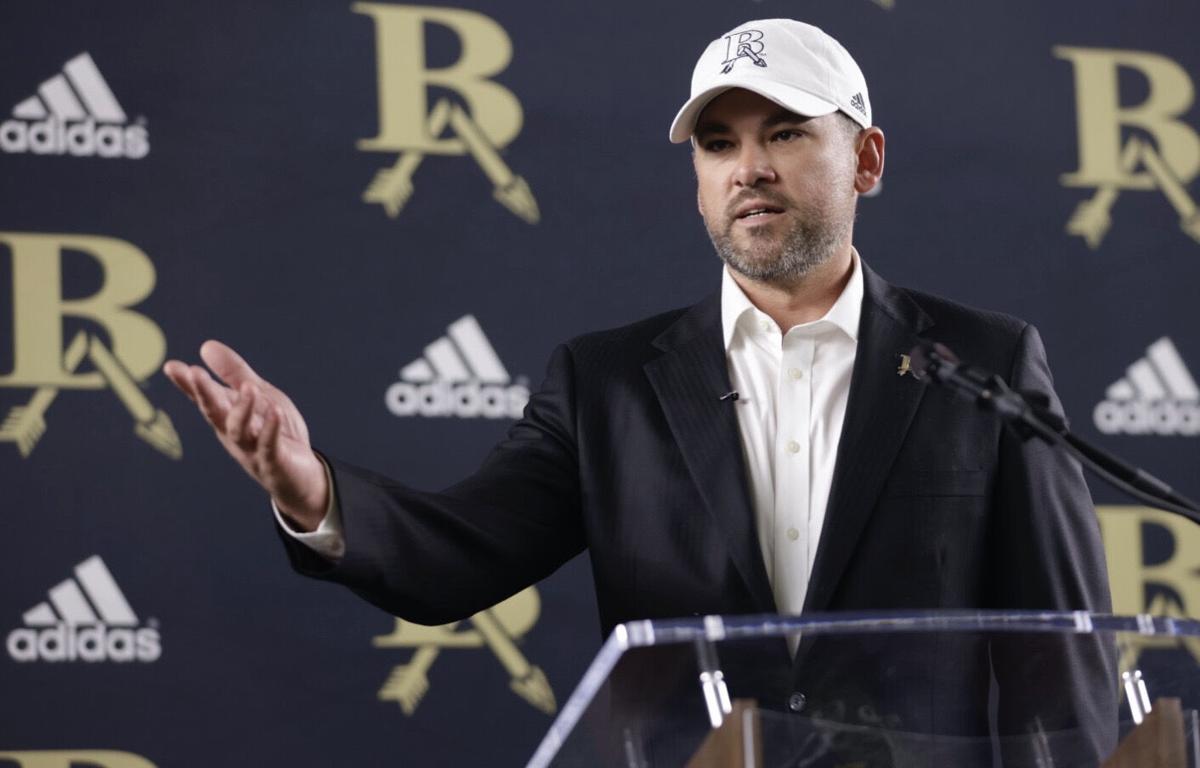 I’m embarrassed that I hadn’t already thought to use this line, but Owasso coach Bill Blankenship did and I’m borrowing it.

As we spoke about Broken Arrow’s hiring of Bill’s son, Josh Blankenship, to coach the Tigers’ football program, Bill said, “For our students, when we play against Broken Arrow, I can’t think of a more appropriate cheer than this one: ‘Who’s your daddy?’”

Josh was Bill’s quarterback at Union, and to this day still may be one of the two best high school QBs coached by the older Blankenship. The other would be Justin Fuente.

At the age of 20, Josh was a University of Tulsa quarterback. At 30, he was the offensive coordinator for a Union team that captured its third consecutive state championship.

For anyone who has known Josh since the ’90s, it’s difficult to even fathom that he’s now 40. His wife, Lindsay, was a Jenks cheerleader.

“She cheered against me in the (1998) state championship game,” Josh recalls. “While I was crying, she was cheering.”

They have four children and are the foster parents of three more kids. At the end of a 690-mile drive, Josh, Lindsay and the entire Blankenship Bunch were at Broken Arrow’s indoor facility for a Friday news conference.

After having been the head man for three seasons at Division II Adams State University in Colorado, Josh Blankenship has secured a big-pressure job for which he didn’t even apply.

As by far Oklahoma’s largest high school, Broken Arrow has only one football state title in its history. David Alexander coached the unbeaten 2018 Tigers to that championship, but his Nov. 30 firing set into motion a process that resulted in a Jan. 1 job offer for Josh Blankenship.

“I’m more blown away that I get to bring my kids back to this area,” Josh said. “There’s been a lot of reflection and nostalgia. I was the same age as my oldest boy, Barrett — sixth grade — when Dad came to Union (in 1992). To think of the opportunities that my brothers and I had in that environment, it’s incredible.”

Meanwhile, Angie Blankenship — Bill’s wife and Josh’s mom — will experience what Judy Gundy did during so many Mike vs. Cale Bedlam games: stress and conflicting emotions.

“Mom said she would sit down in the end zone,” Josh reports, “with her chair straddling the middle of the field.”

In a football sense, the Blankenship home has become a house divided. And as there’s always the great possibility that Owasso and Broken Arrow could clash a second time during any postseason, media members and fans would feast on the Bill vs. Josh storyline.

“What we’ve talked about already is how much fun it would be before the game — the build-up and everything,” Bill Blankenship said. “Neither of us wants to think about the postgame handshake. Neither one of us would ever do less than the absolute best for our kids, and that means trying to win the game.

“The Patriot Bowl is fun. What worries me a little is if we see each other in the playoffs.”

The Broken Arrow search for a new coach was fronted by Chuck Perry, the school district’s associate superintendent of student services, and athletic director Steve Dunn.

Of course, there were tons of applicants. Josh Blankenship did not apply. While aware of the Broken Arrow opening, he was occupied with the management of an Adams State program that didn’t have a 2020 fall season because of the coronavirus.

Shortly before Christmas, it was suggested to Perry that Josh Blankenship might be an interesting option. Perry is a former Union soccer coach and athletic director whose friendship with Bill Blankenship dates to the ’90s. Perry was the Union AD when Josh was the offensive coordinator for state title teams.

“In a sense, without realizing it, Josh 10 or 12 years ago was auditioning for this job now,” Perry explained. “I observed the way he worked and carried himself. He was always very impressive, even as a young coach. Obviously, he’s got great bloodlines.

“I think this is great for Broken Arrow football. If Josh had followed Bill as the head coach at Union or Owasso, he would be viewed as Bill’s son. Here at Broken Arrow, Josh can make his own mark.”

In 2014, which would be Bill Blankenship’s final season as the TU head coach, Josh coached Golden Hurricane quarterbacks. Josh’s head-coaching experience amounts to three seasons at Muskogee (where in 2011-13 his record was 8-21) and three seasons at Adams State, where he was promoted after having been the coordinator of dynamic offenses. His head-coaching record with the Grizzlies is 8-14.

Before Bill scored the Union job, he had a two-season record of 12-10 at Edmond Memorial. At Union, he had the resources and personnel to win big.

At Broken Arrow, for the first time in Josh’s head-coaching career, he’ll have championship-level resources and personnel.

“The facilities are insane. It’s top in the country,” Josh said. “A lot of places — even at the collegiate level — can’t compete with that. It’s a unique and special place, but it was all about the people for me. That really was the deal.”

Josh, Lindsay and their kids made the 690-mile drive from Alamosa, Colorado, for the second time in three weeks. They were at Bill and Angie’s place for Christmas, and it was during that visit that Josh was invited to meet with Perry and Dunn.

Regarding this Broken Arrow possibility, did Josh seek advice from Bill as a coaching colleague or as a dad?

“Probably as a dad,” Josh said. “We sat down in the living room, talking on the couch for a long, long time. Mom, also.

“Honestly, Mom probably brought the thunder more than Dad did, as far as the wisdom goes. It was a neat thing to be able to lean on them.”

As a Union player, Josh was there at the front end of a process that resulted in Tulsa becoming one of the nation’s real hotbeds for prep football.

Striving to fortify the Blankenship brand.

It has to be surreal.

“I don’t mean to diminish what Dad and coach Trimble did, because they did something unbelievable,” Josh said. “But right now, I’m just more excited about the people I’ll get to work with and bringing my family back home.

Gallery: A look back at Josh Blankenship’s career so far

Correction: This story originally listed the incorrect point totals for Bixby's Parker Friedrichsen and Xavier Glenn. This story has been corrected.

Takyla Pitts scored a career-high 24 points, helping her Class 6A No. 2-ranked basketball team race past 5A No. 1 Sapulpa.

Bixby's Parker Friedrichsen and Xavier Glenn combined for 67 points in a 97-95 overtime win over Sapulpa on Friday. They are combining for nearly 48 points per game in the Spartans' 9-1 start.

Steward won both his individual events.

Pankey led Okmulgee to boys state titles in 1992 and '93. Mitchell, after starting his coaching career at Union, guided Edmond to eight state championships.

The boys tournament is moving to Victory Christian and Verdigris will host the girls tournament.