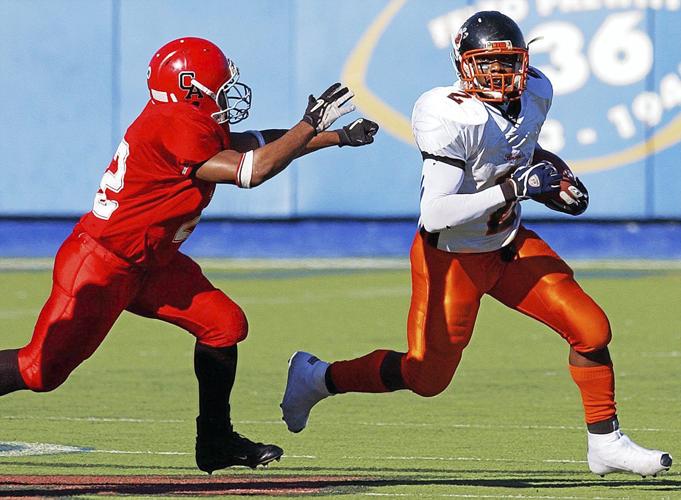 Former Booker T. Washington running back Felix Jones (right), shown in the 2004 Class 5A state title game against Midwest City Carl Albert, will be inducted into the TPS Athletics Hall of Fame on Thursday. 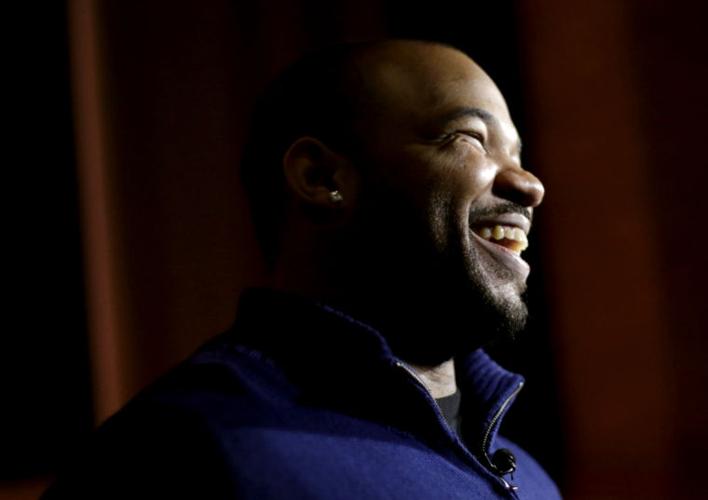 Shawn Jackson, a former McLain standout, will be inducted into the TPS Athletics Hall of Fame on Thursday.

Felix Jones, Shawn Jackson and 12 others will be inducted into the Tulsa Public Schools Athletics Hall of Fame on Thursday night at the DoubleTree Tulsa at Warren Place.

There will be a reception at 5:30 p.m., followed by the ninth annual banquet that is scheduled to start at 6:30 p.m.

Seating is limited to around 200. A few tickets may be available at the door for $100.

Jones was the Tulsa World’s state football player of the year in 2004 with 2,282 rushing yards and 48 touchdowns to help Booker T. Washington reach the Class 5A final. He was an All-American as a kick returner at Arkansas in 2007 and played in the NFL from 2008-13, primarily with the Dallas Cowboys.

Jackson, a 2009 McLain graduate, had career totals of 8,422 total yards, 95 touchdowns and 522 tackles. As a University of Tulsa linebacker, he was the Golden Hurricane’s top defensive player in its 2012 Liberty Bowl win and was the 2013 Conference USA defensive player of the year.

Admire was a basketball standout for Webster in 1960 and had a 43-year career with the Marine Corps. He was a senior White House military aide for President Carter and retired as a major general. Harmon was the World’s 1965 state basketball player of the year with Central and played four seasons at Kansas.

Floyd was a 2004 Tulsa World All-State first-team selection at defensive end for East Central. In 2011, he joined the Tulsa Police Department and spent two years as TPD’s first community resource officer. In 2017, he was one of the Tulsa World’s “Tulsans of the Year.”

Oglesby, a 1954 Central graduate, was hired in 1969 as a Texas Tech basketball assistant, was head track coach from 1975-95 and on the Red Raiders’ athletic staff for 48 years until his death in 2017. Kraft Yandell, a 1973 Edison graduate, was among the nation’s elite junior tennis players and won the girls 14-under national doubles title in 1969.

Billings won a state wrestling title as a senior for Webster in 1953, was on two NCAA title teams at Oklahoma State and coached five seasons at Webster, where he was principal from 1984-94. Villareal, a 1933 Central graduate, coached Rogers to its only state wrestling title in 1958 and was inducted into the National Wrestling Hall of Fame in 1995.

Hogg, a 1960 Booker T. Washington graduate, was a team captain in football and baseball. In the early 1970s, he was Tulsa television’s first black news anchor at KOTV. Knox helped Memorial win state baseball titles in 1980 and ‘81 before pitching at Oral Roberts.

Lefler coached East Central to the Class 4A state baseball title in 1970 and led the Cardinals to a pair of state basketball tournament berths. MacKenna, a 1957 Central graduate, coached Memorial to state baseball titles in 1980, ‘81 and ‘84. Rupe was the World’s 1980 state baseball player of the year after leading Hale to the state title game and then pitched at ORU.

Televised live on one of the ESPN channels and streamed on ESPN Plus, Jenks-Bixby has been moved to Thursday, Nov. 3.

Two months after the splashy announcement that Los Angeles quarterback prospect Jackson Presley would play at Jenks as a ninth-grader, circumstances resulted in a Presley family decision to stay in California.

viewers can watch the game only by clicking on Owasso’s in-house, four-camera, live-stream production – available at no cost at owassoathletics.org.

How Owasso's Brennan Phillips was named All-World baseball player of the year over Jackson Holliday, the top pick in the draft

All-World honors have never been all about who is the higher-rated prospect or who may be the better college or pro player.

Jenks is in good shape regardless of who is quarterback, but with Shaker Reisig moving Union and Jackson Presley back in California, Ike Owens is the likely starter. Barry Lewis and Patrick Prince give an update on area high school football and recap the All-World Awards winners in their latest podcast.

Tulsa World sports columnists Bill Haisten and Guerin Emig preview all levels of football in their latest podcast. Which local players are turning heads in NFL camps? Who is the favorite to win the Big 12? What is going on with the quarterbacks at Jenks and other area high schools this offseason?

Edison's Oliver Falvey transformed by mother's death to inspire others

Oliver Falvey, alongside his sister Emerson, stood and listened as their mother Jill delivered her dying wish.

Former Booker T. Washington running back Felix Jones (right), shown in the 2004 Class 5A state title game against Midwest City Carl Albert, will be inducted into the TPS Athletics Hall of Fame on Thursday.

Shawn Jackson, a former McLain standout, will be inducted into the TPS Athletics Hall of Fame on Thursday.