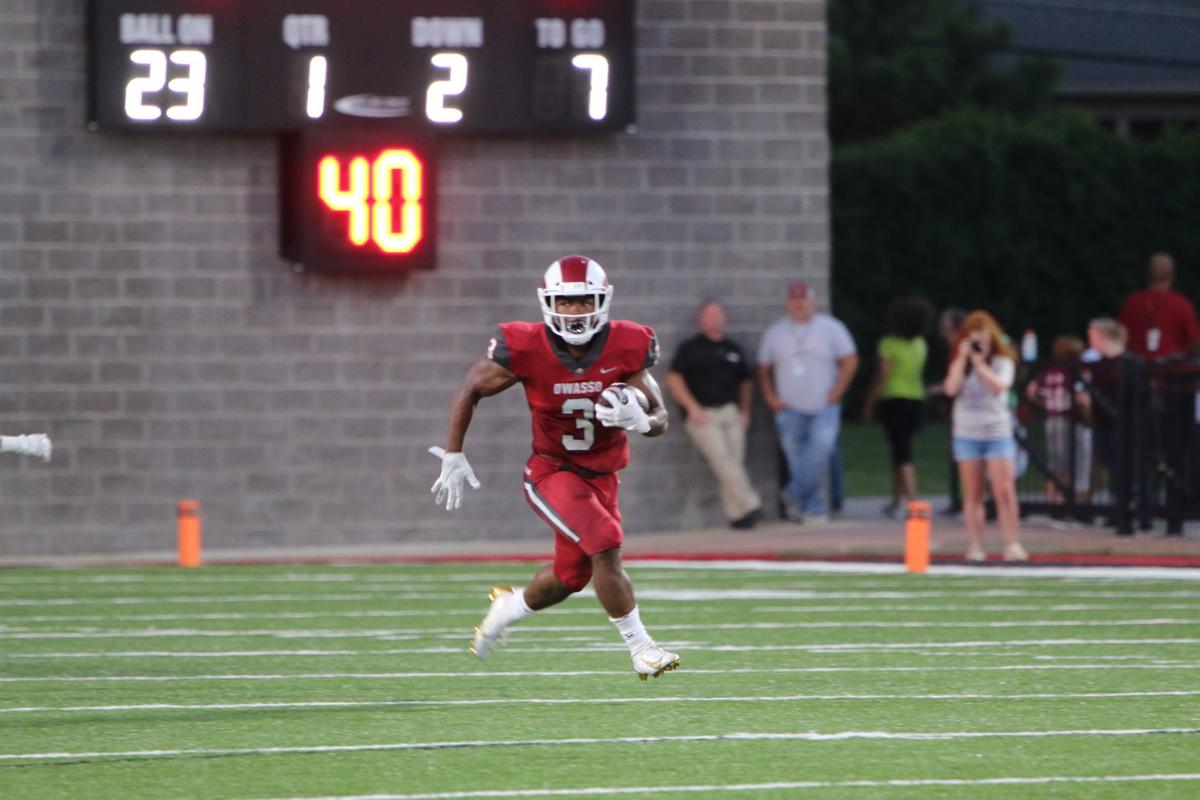 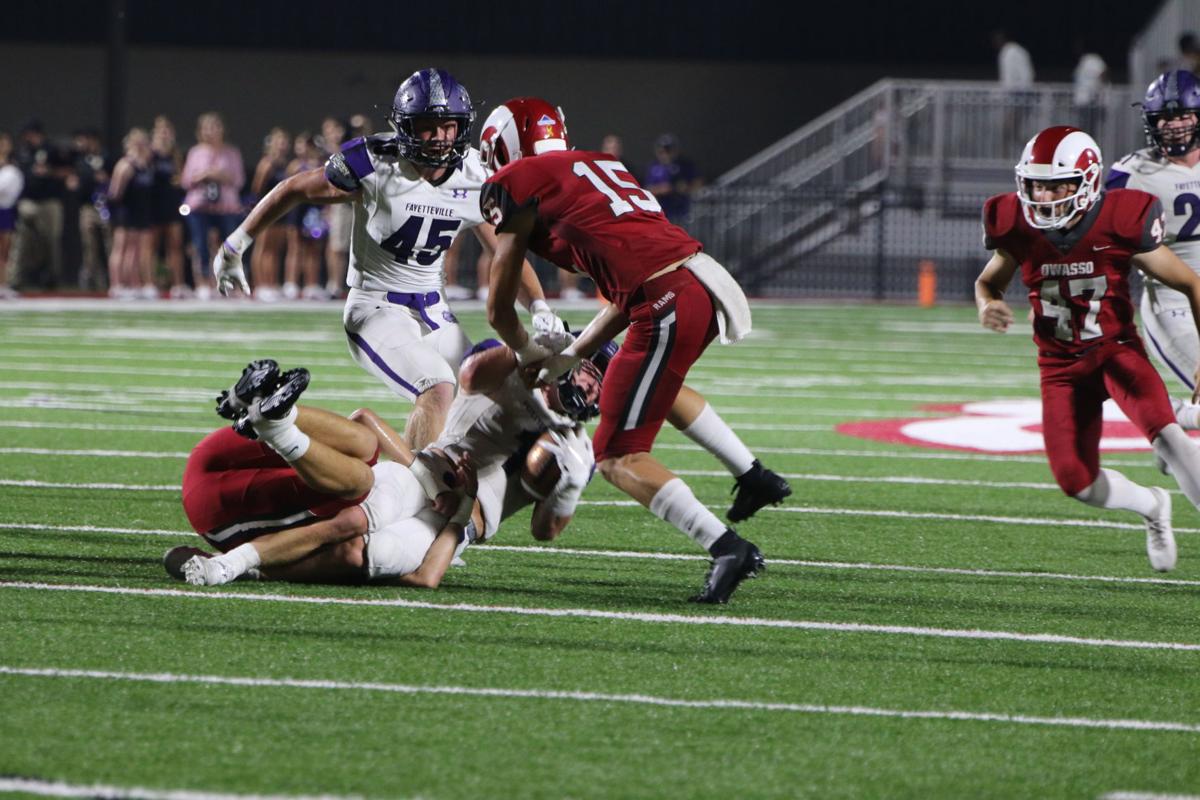 Owasso’s defense held Fayetteville’s high-octane offense to 315 yards and two touchdowns. The Rams also scored a pair of defensive touchdowns in a 51-19 victory in their home opener. JENIFER DeCASTRO/For The Tulsa World 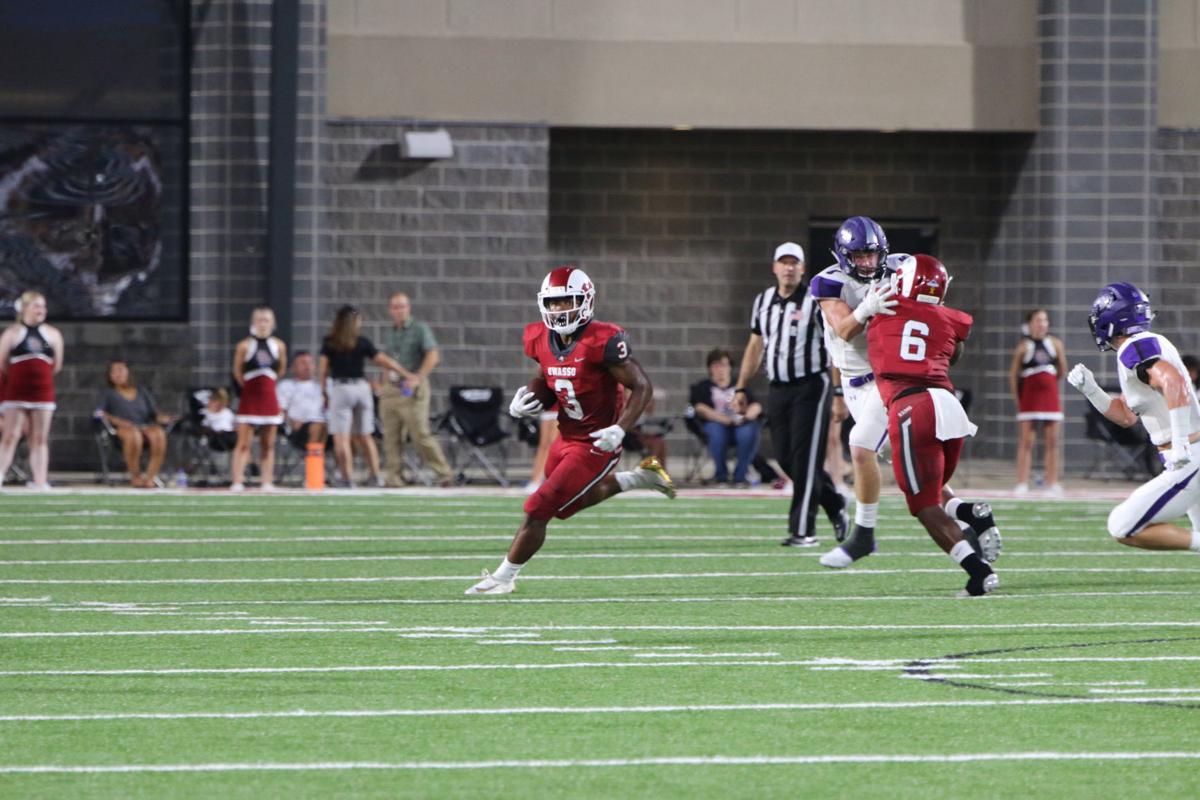 View from the field: See our photos as Owasso defeats Fayetteville, Ark.

OWASSO — Fayetteville torched the Owasso defense a year ago in Arkansas. The Purple Dogs racked up 45 points and nearly 600 yards of offense as they ended the Rams’ school-record win streak.

On Friday night, Owasso exacted a bit of revenge in its home opener.

The No. 2-ranked team in Class 6AI picked off three passes, two of which they returned for scores, as it rolled to a dominating 51-19 victory in front of more than 8,000 fans at Owasso Stadium.

Isaiah Jacobs ran for 118 yards and scored two touchdowns. Cole Dugger completed 13-of-19 passes for 213 yards and three scores as the Rams improved to 2-0 on the season with their second win over an Arkansas team.

Owasso will take on No. 1 Broken Arrow on the road next week in its final nondistrict game.

Owasso scored three times in a four-plus minute span in the second quarter, including both interception returns for scores, to take a 27-9 halftime lead.

Jacobs, whose 42-yard run set up his 15-yard touchdown catch from Dugger in the first quarter, gave the Rams a 13-7 lead on 1-yard plunge midway through the second quarter. Jacobs’ score was set up by a 77-yard scamper from Dugger to the Fayetteville 3.

The Purple Dogs’ next drive ended when Owasso cornerback Omarr Barker stepped in front of a Hank Gibbs pass and returned it 37 yards for a score. Two series later, safety Gage Laney picked off a ball and ran 70 yards for a 27-6 Owasso lead with 2:16 left in the half.

Laney finished with two interceptions in the game.

Kirby had three catches for 76 yards. Ronnie Thomas led all Owasso receivers with 76 yards and had a 4-yard TD run that capped the scoring in the fourth quarter.

Fayetteville (1-1) was hurt by costly turnovers and penalties. The Purple Dogs were flagged 15 times for 140 yards.

Connor Flannigan, who led all of Arkansas in receiving yards a year ago, paced Fayetteville with 11 catches for 129 yards.

Rams coach Bill Blankenship guided Fayetteville to the 2016 state championship, then took Owasso to its first state title in 43 seasons a year later.

Broken Arrow held Union to 104 yards of offense on its way to a 14-0 victory over the Redskins on Friday night.

Owasso’s defense held Fayetteville’s high-octane offense to 315 yards and two touchdowns. The Rams also scored a pair of defensive touchdowns in a 51-19 victory in their home opener. JENIFER DeCASTRO/For The Tulsa World