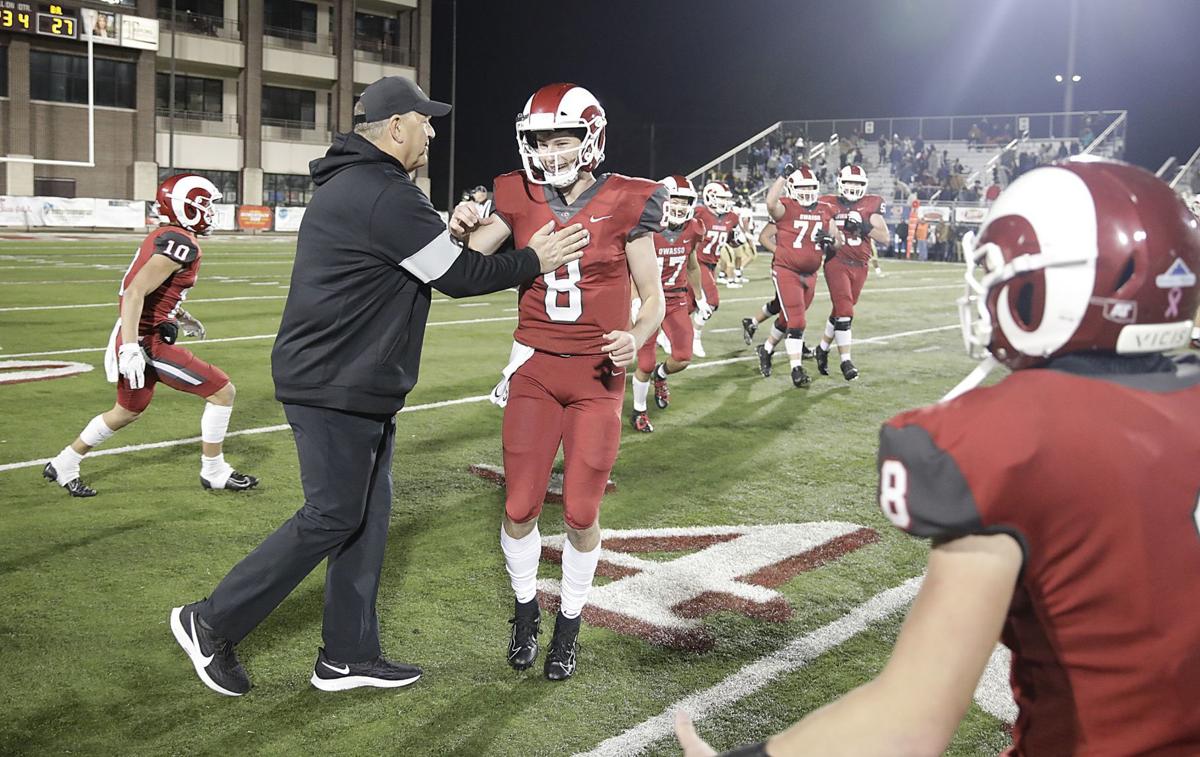 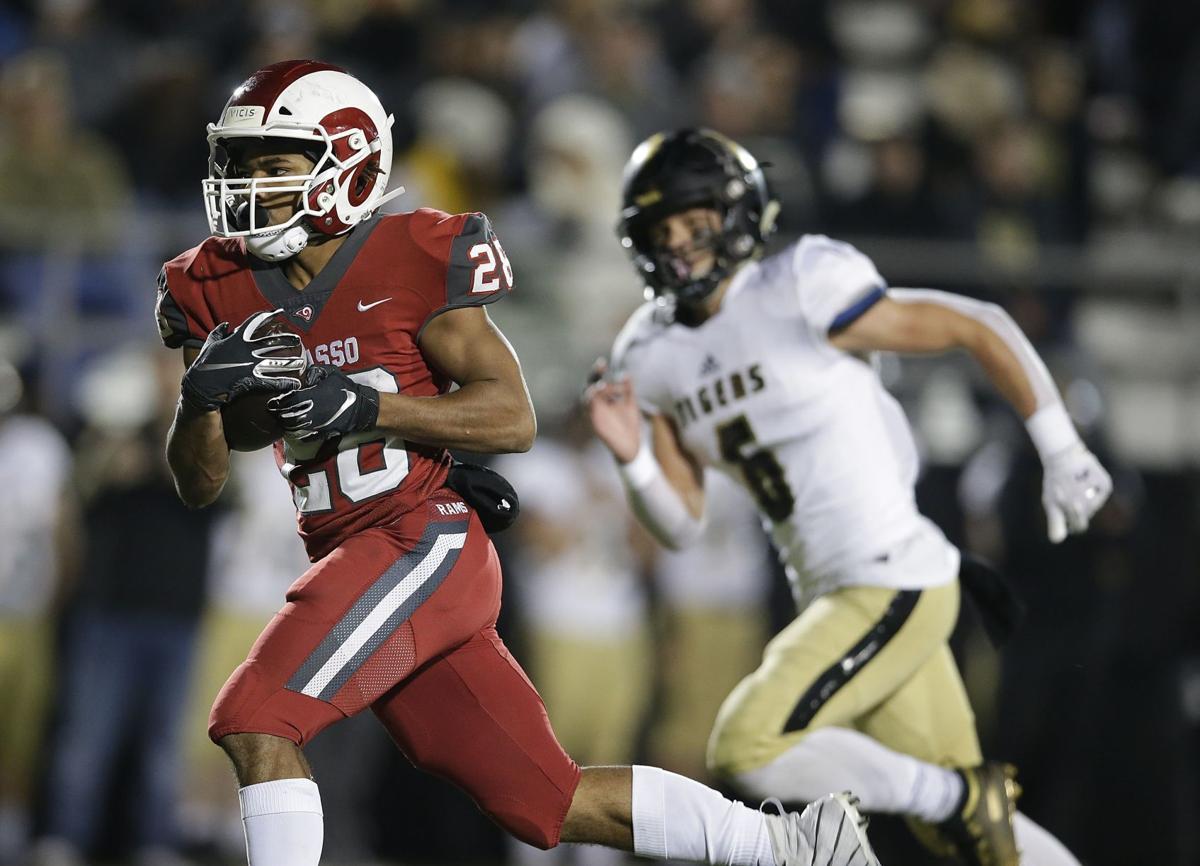 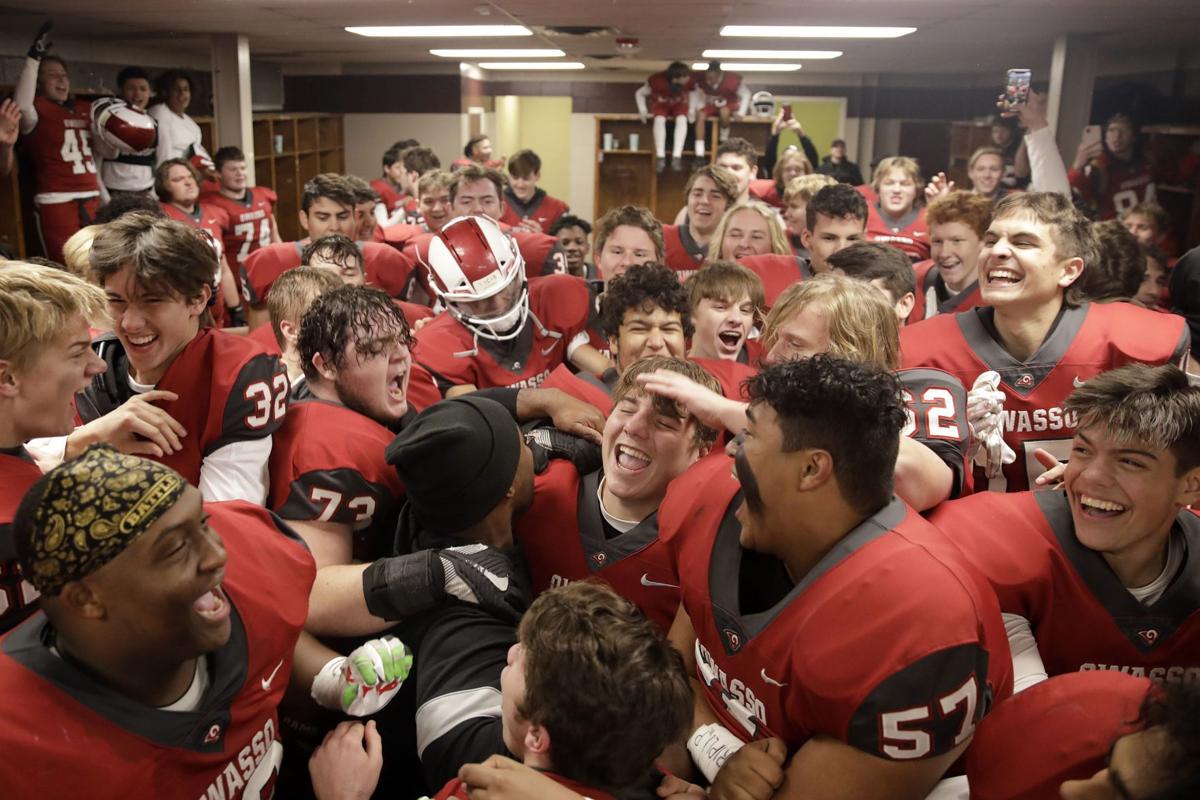 Owasso players celebrate in the locker room after defeating Broken Arrow in a Class 6AI semifinal game in Jenks on Saturday.

JENKS — Cole Dugger has consistently delivered high-level performances in his first season as Owasso’s starting quarterback, and he produced another in the Class 6AI semifinals Saturday night.

Dugger completed 19-of-24 passes for 354 yards and accounted for five touchdowns as he led the top-ranked Rams past No. 2 Broken Arrow 42-27 before an estimated 6,000 fans that nearly filled Allan Trimble Stadium.

“Cole is a really special competitor, and I’m glad he plays for us,” Owasso coach Bill Blankenship said.

The top-ranked Rams (12-0), looking for their second gold ball in three years, advance to the state title game against No. 3 Jenks (8-4) at 8 p.m. Dec. 7 at the University of Central Oklahoma’s Wantland Stadiumin Edmond.

Owasso, which avenged a 10-7 semifinal loss to Broken Arrow last year, also defeated the Tigers 42-19 on Sept. 13. Dugger, whose only loss in 25 starts over the past two seasons was in the 5A semifinals with Collinsville last year, had two TD passes in the earlier meeting with the Tigers.

Defending champion Broken Arrow (9-3) was hampered by the loss of 1,000-yard rusher Sanchez Banks, who had six carries for 19 yards before leaving with a foot injury. Before that, the Tigers lost standout defensive back Myles Slusher with an upper body injury. Slusher also was injured in the earlier game with Owasso and in both instances the loss was costly as Dugger repeatedly burned Broken Arrow with deep and intermediate passes.

Broken Arrow also committed some costly mistakes, such as punter Tyler Crawford’s fumbled snap that turned into an Owasso TD by Jacob Clifton late in the first quarter, giving the Rams a 14-7 lead they never relinquished.

That was the first of three consecutive Owasso TDs en route to a 28-7 lead, and it appeared the Rams were on their way to another blowout win. But Broken Arrow responded with 17 points in a row.

“It was a valiant effort,” Broken Arrow coach David Alexander said. “We didn’t play well in the first half, but we played hard and gave ourselves a couple chances in the second half. We just needed one more break.

“I told them at halftime we needed one big defensive play in the third quarter and we got that, and we would need two in the fourth quarter, and we didn’t get that. We just dug ourselves a hole and ran out of bullets, ran out of guys.”

After trailing 28-14 at halftime, the Tigers opened the second half with a long drive capped by Crawford’s 21-yard field goal. Broken Arrow then made it 28-24 when Campbell Yeager returned a Dugger fumble 8 yards for a touchdown after he was sacked by Zeno Marcheselli.

Owasso, however, responded as Dugger fired a 13-yard TD pass to a diving Ronnie Thomas on the fourth quarter’s opening play.

Crawford’s 37-yard field goal with 7:26 left cut the Rams’ lead to 35-27. But 95 seconds later, Dugger rolled right and flipped a short pass to Mario Kirby, who turned it into a 71-yard clinching touchdown.

Owasso scored on the game’s first possession as Dugger connected with freshman Cole Adams for a 43-yard TD. It was Adams’ second 43-yard TD against Broken Arrow this season.

On the second quarter’s opening play, running back Derrick Overstreet caught a 51-yard strike from Dugger for a 21-7 lead. Owasso made it 28-7 as Dugger scrambled for a 3-yard TD, set up by his 49-yard pass to Payton Lusk.

Broken Arrow cut its deficit to 28-14 as Maurion Horn took a swing pass 45 yards for a TD with 53 seconds left in the half. That sparked the Tigers’ 17-0 run before Owasso regained control.

“They (Tigers) battled back and we kept having adversity, it did not come easily,” Blankenship said. “And I think those are the most rewarding victories when you have to fight, claw and scratch.”

Owasso's Cole Dugger threw four touchdowns, including a 71-yarder to Mario Kirby in the fourth quarter, as the No. 1-ranked Rams knocked off N…

View from the field: See our photos as Owasso defeats Broken Arrow in 6AI semifinals

Owasso players celebrate in the locker room after defeating Broken Arrow in a Class 6AI semifinal game in Jenks on Saturday.