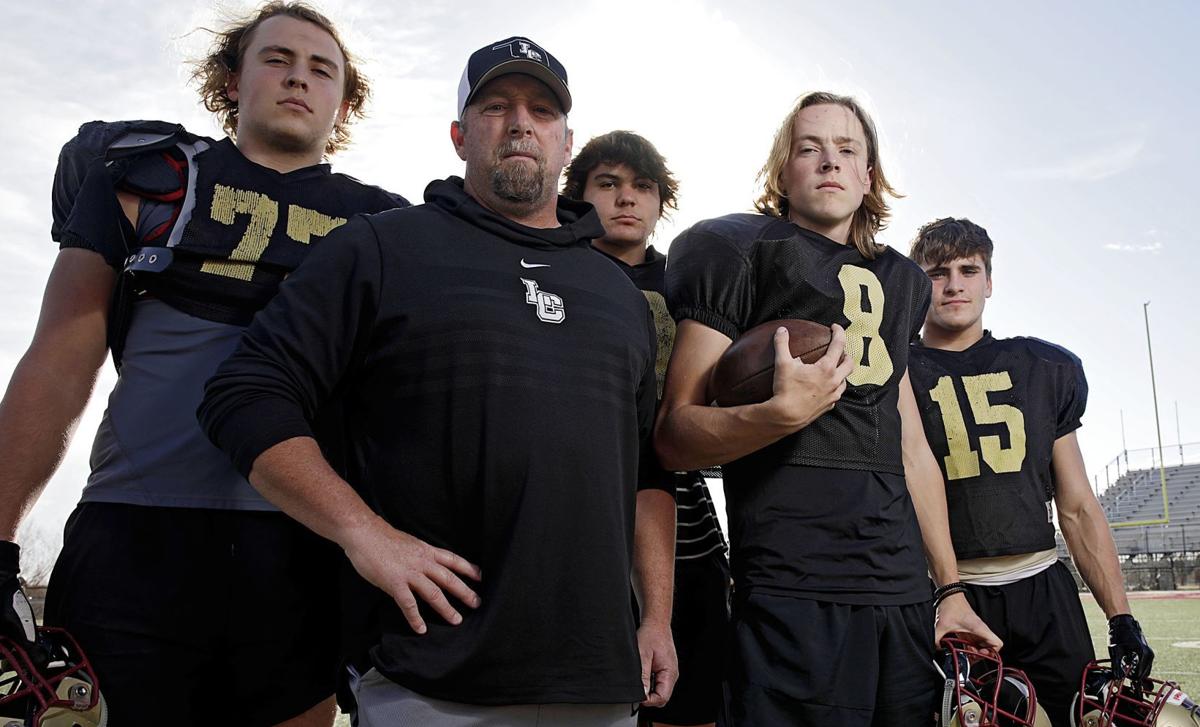 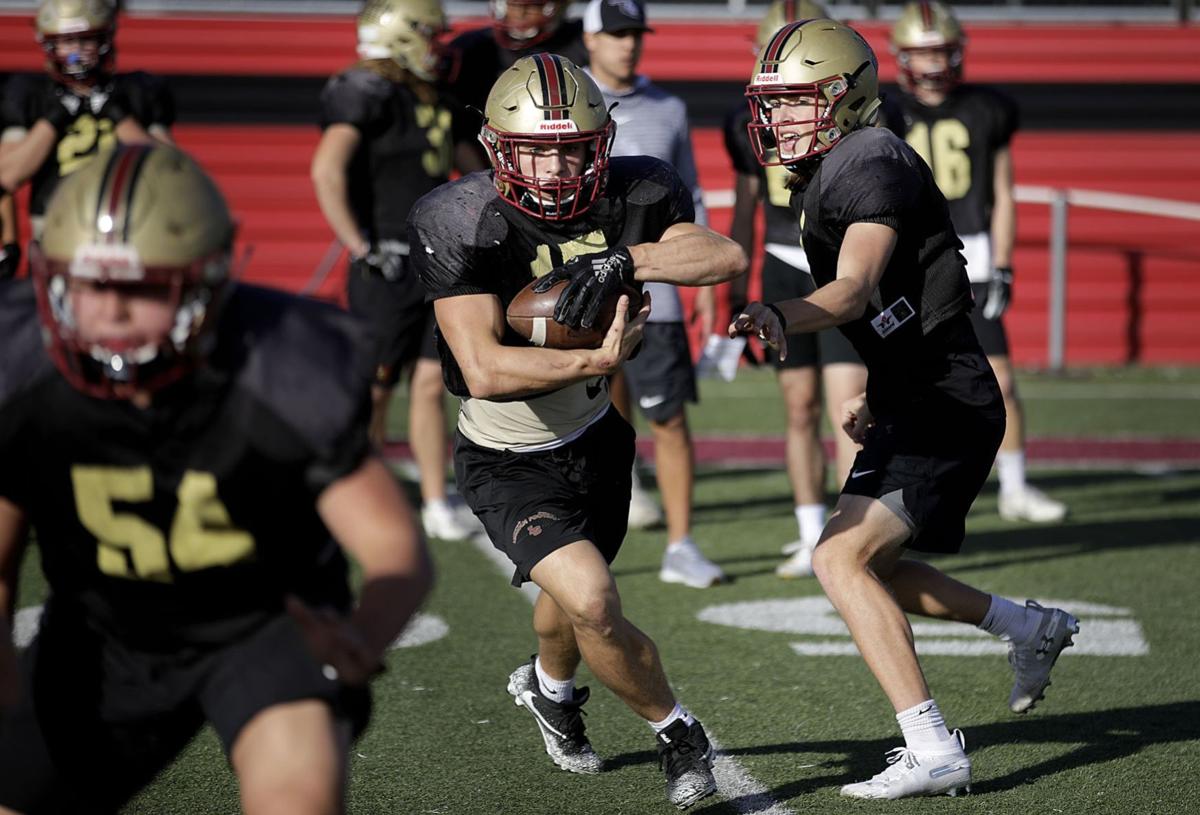 Lincoln Christian running back Josh Kaste, who has rushed for 1,320 yards and 23 touchdowns this year, takes a handoff from quarterback Chase Ricke during practice Wednesday. MIKE SIMONS/Tulsa World 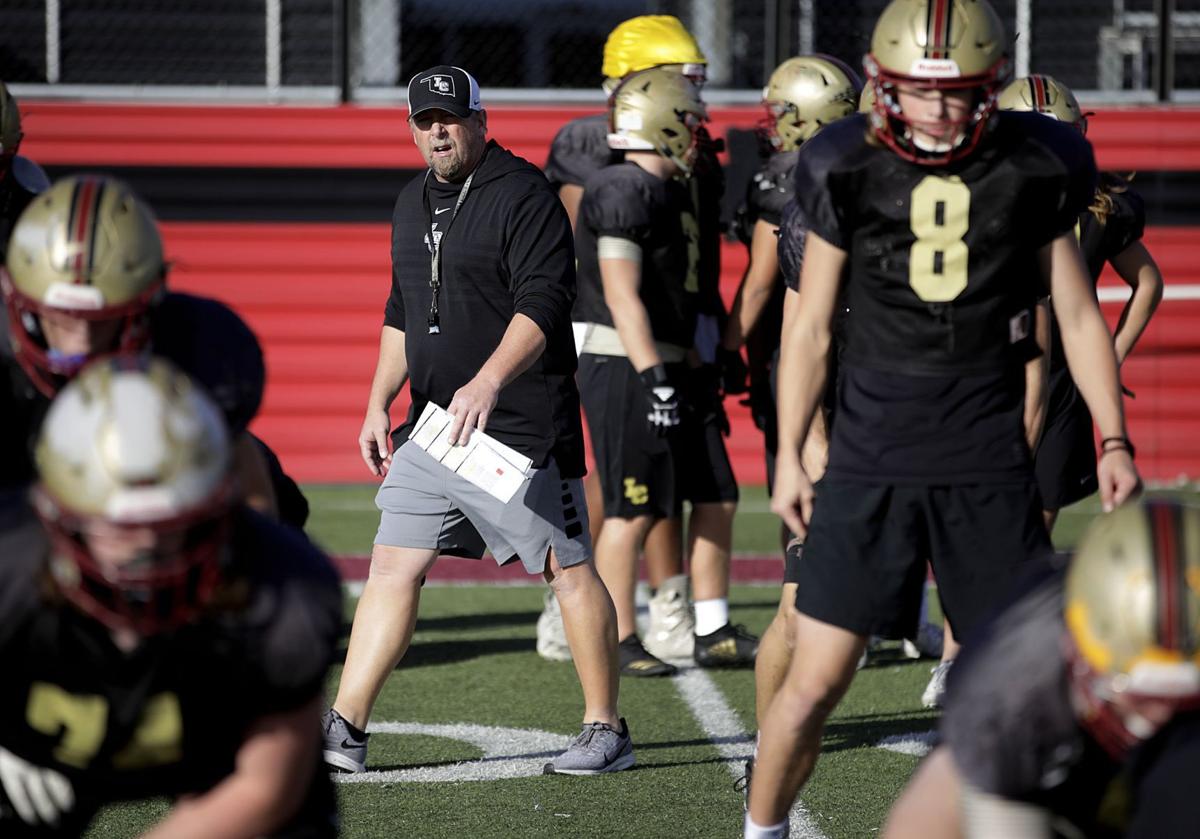 Coach Jerry Ricke, who’s in his third season as head coach of the Bulldogs, says, “I’ve got great parents, and when you’ve got the parents, you’ve got the kids.” MIKE SIMONS/Tulsa World 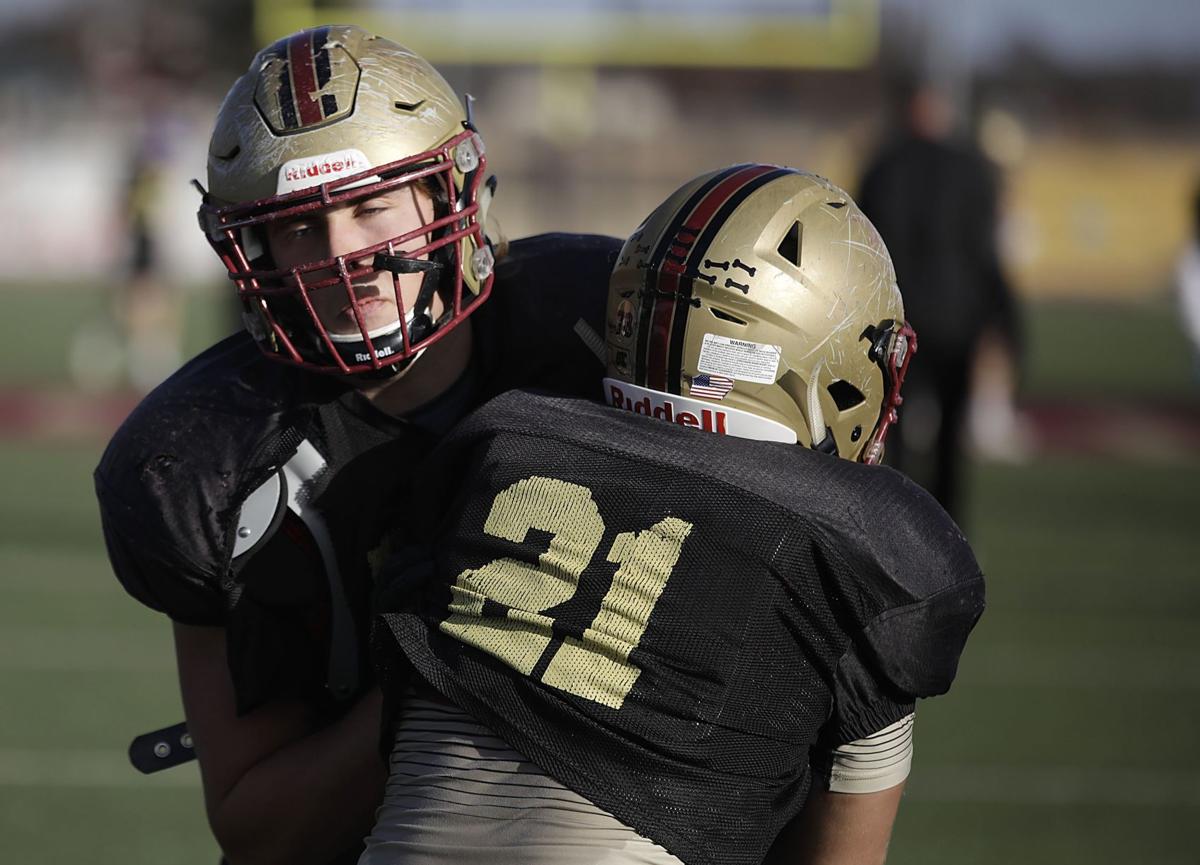 Lincoln Christian lineman Jordan Overson (left) is part of an offense that averages a Class 3A-best 51.8 points per game and a defense that is third in scoring defense, allowing 11.5 ppg. MIKE SIMONS/Tulsa World 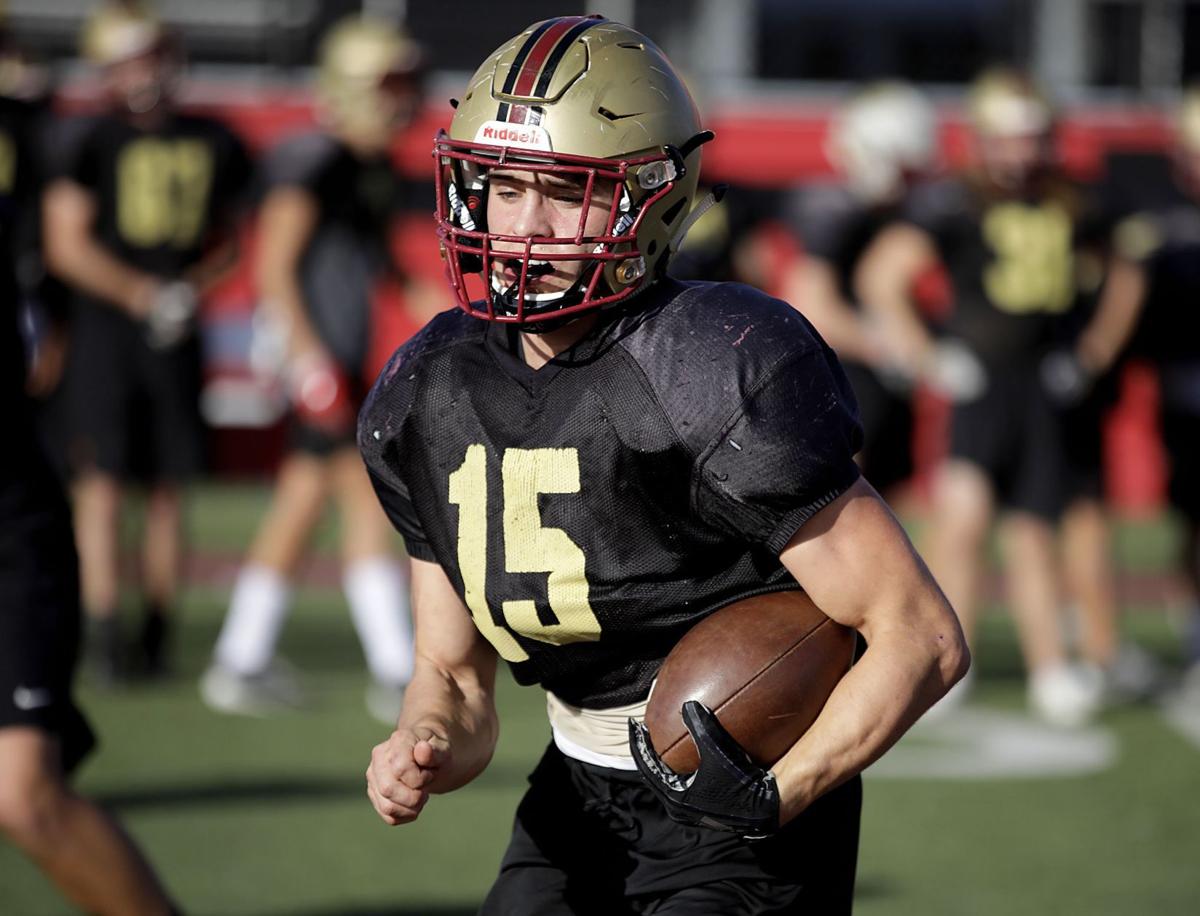 Senior running back Josh Kaste has rushed for 1,320 yards and 23 touchdowns this season. MIKE SIMONS/Tulsa World 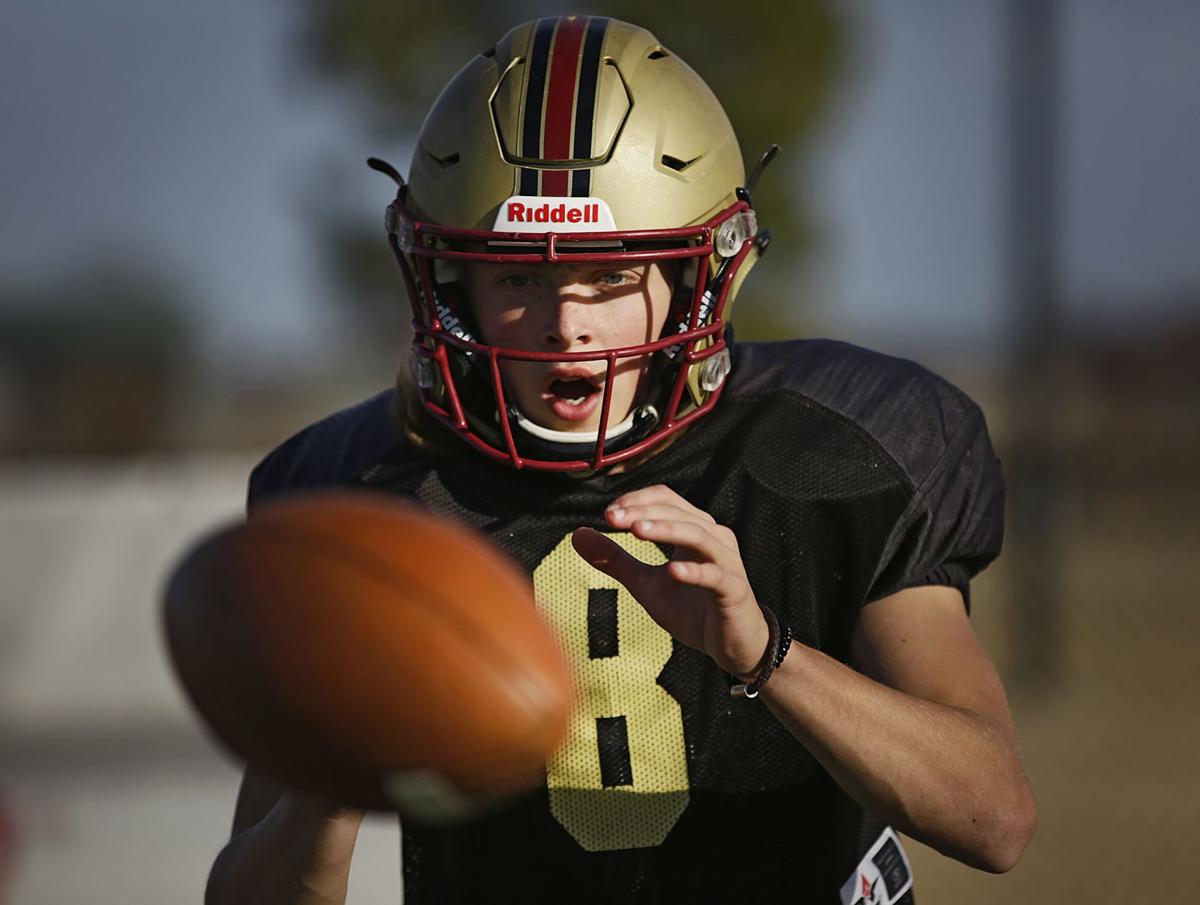 Chase Ricke said he thought it would be fun to grow out his hair for his senior year.

“That’s a big conversation in our house because our family usually keeps their hair short, but it’s gotten to the point where they think it’s too long,” he said.

“It’s not a hill I’m gonna die on,” Jerry Ricke said with a chuckle. “Besides, if he keeps winning football games, he can have it as long as he wants.”

For father and son, claiming a state football championship trumps almost every other consideration. Chase Ricke is Lincoln Christian’s record-setting quarterback and Jerry Ricke is the head coach of the Bulldogs, who will try to derail a juggernaut at 7 p.m. Friday.

The Bulldogs know what they’re up against. They fell to the Chargers 69-34 in last year’s semifinals and most of them remember the 2015 3A final in Stillwater, when Heritage Hall rolled 38-14.

“The best thing we have going for us is that our kids know how good they are and what it’s gonna take to beat them,” Jerry Ricke said. “It’s gonna take a team effort and for every guy to be the best version of himself.”

Lincoln may have a better chance this time with an explosive offense and improved defense. Led by Chase Ricke’s 46 touchdown passes, the Bulldogs average a 3A-best 51.8 points per game and are third in scoring defense, allowing 11.5 points per game.

This is Jerry Ricke’s third year as head coach, ninth as offensive coordinator and 18th overall with the school operated by Church on the Move. He arrived as an assistant coach in 2002, the same year Darren Melton started the program.

“When I heard they had hired Darren (a former Jenks defensive coordinator), I knew they were planning to do big things here and I wanted to be part of it,” said Ricke, who grew up in Iowa and attended the University of Tulsa.

Melton coached Lincoln’s first 15 seasons, guiding the Bulldogs to a 2A state championship in 2009 and the runner-up finish in 2015. Ricke took over in 2017 when Melton resigned to become the school’s athletic director.

The current team is a family affair for Jerry Ricke in more ways than one. Chase is one of 19 seniors, many of whom have played together since the third grade.

“I’ve coached a lot of ‘em growing up, so there’s a trust factor there,” Jerry Ricke said. “They trust me and I trust them. And the coolest thing was getting to know their parents. I’ve got great parents, and when you’ve got the parents, you’ve got the kids.”

Connor Johnson, who learned his linebacker craft alongside LCS standouts Jace Ward and Tyson Ward last season, has grown into a 6-foot-3, 190-pound beast and stars as an outside linebacker and a hybrid receiver who can line up wide or tight.

Johnson leads the Bulldogs in receiving with 52 catches, 1,154 yards and 21 TDs, and on defense has 18 tackles for loss. He was off the charts against Kingfisher last week with 216 receiving yards, three TDs and three interceptions.

Another key senior, Josh Kaste, has rushed for 1,320 yards and 23 TDs and is averaging 9.4 yards per carry.

Chase Ricke, with more than 3,000 passing yards for the third straight year, totals 9,243 yards and 105 TD passes over four seasons.

In a first-round win over Inola two weeks ago, he became the school’s all-time passing leader, eclipsing 2015 standout Micah Wilson, who finished with 8,751 yards.

Ricke was an eighth-grade ball boy in 2015 when Wilson, now a fourth-year junior at the University of Missouri, led the Bulldogs to a 14-1 record and the runner-up finish to Heritage Hall.

“I was his ball boy through (Wilson’s) last two years, so we kind of made a connection, being together for all those games,” Ricke said. “I learned about leadership from him. He was good about leading in pregame, during practice and during games.”

Jerry Ricke said his son continues to grow in his understanding and execution of the offense. Chase was nearly flawless against Kingfisher, going 16-for-19 for 330 yards and four TDs.

“There were things we wanted to hit and needed to hit (against Kingfisher) and we hit almost every one of them,” Jerry Ricke said.

Long hair aside, Chase said he seldom has serious disagreements with his dad.

“Our minds work so much alike, and he’s been around teenagers for a long time, so he knows how to handle them,” he said.

Jerry Ricke said he tries to focus on things that matter.

“My dad knew when something was important and when it wasn’t, and I owe my son to treat him the same way,” he said.

The Lincoln Christian football team has 19 seniors. Many have played for Bulldogs head coach Jerry Ricke since the third and fourth grades:

Who is the Week 3 football player of the week? Cast your vote now

Cunu Fields and Lerenzo Fagan are among East Central's standouts during a 2-0 start. Colton Ayres leads Kellyville's offense that has scored 198 points in three games.

High school football: Lincoln Christian moves to No. 1 in 3A rankings

Defending champions return to top spot after comeback win over 2A No. 2 Jones and previous No. 1 Heritage Hall's loss to 4A No. 6 OKC Marshall.

Owasso and Union have combined to win three of the past four Class 6AI state titles.

Lincoln Christian running back Josh Kaste, who has rushed for 1,320 yards and 23 touchdowns this year, takes a handoff from quarterback Chase Ricke during practice Wednesday. MIKE SIMONS/Tulsa World

Coach Jerry Ricke, who’s in his third season as head coach of the Bulldogs, says, “I’ve got great parents, and when you’ve got the parents, you’ve got the kids.” MIKE SIMONS/Tulsa World

Lincoln Christian lineman Jordan Overson (left) is part of an offense that averages a Class 3A-best 51.8 points per game and a defense that is third in scoring defense, allowing 11.5 ppg. MIKE SIMONS/Tulsa World

Senior running back Josh Kaste has rushed for 1,320 yards and 23 touchdowns this season. MIKE SIMONS/Tulsa World