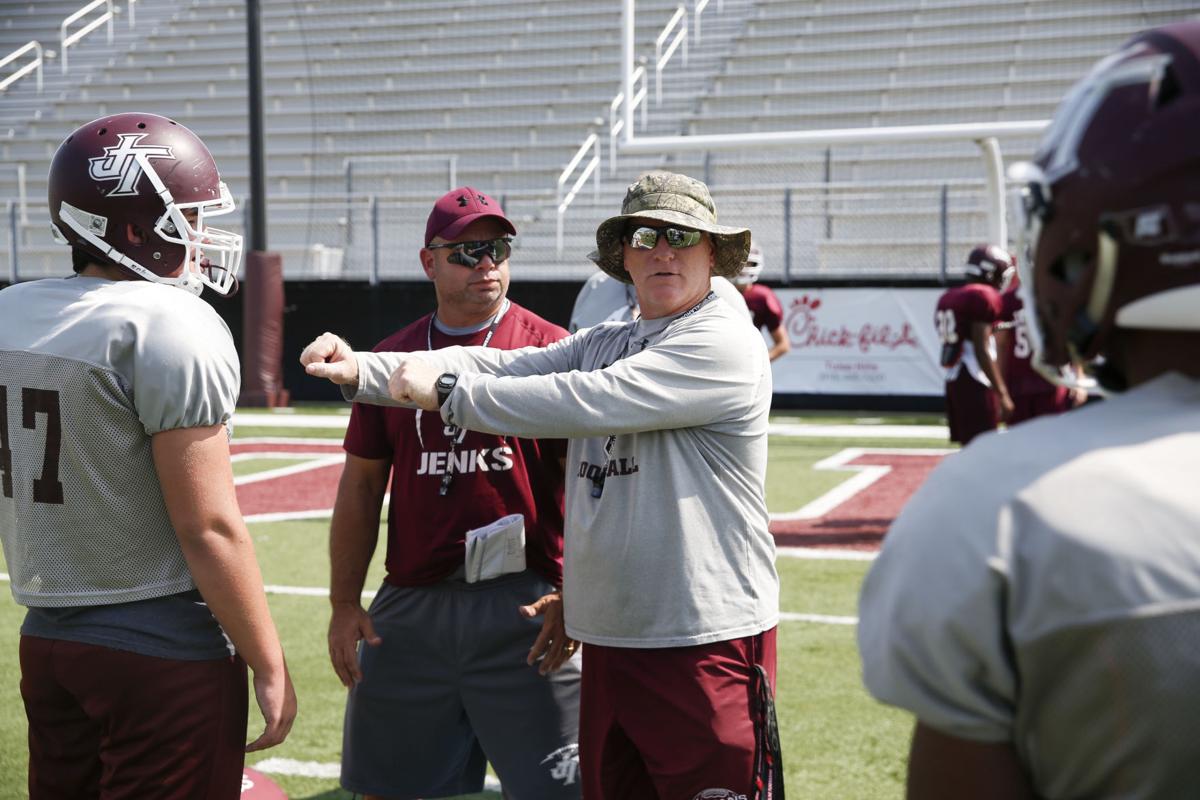 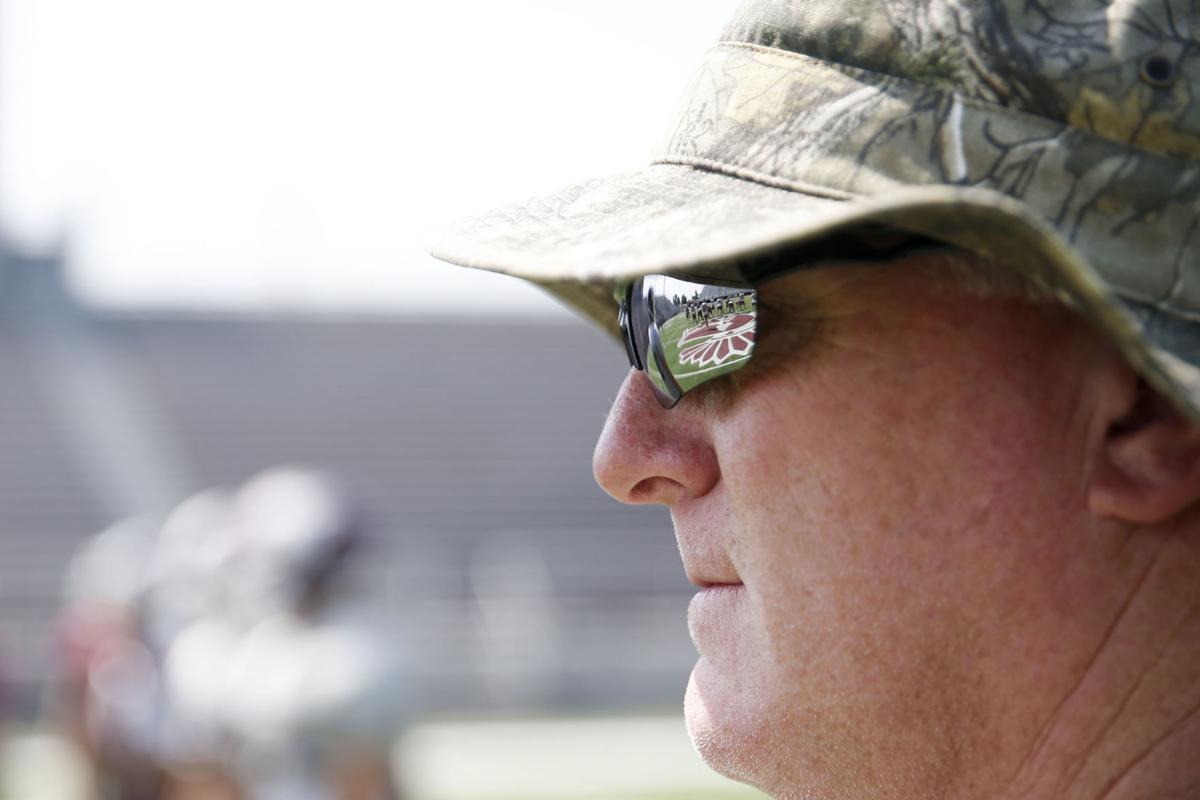 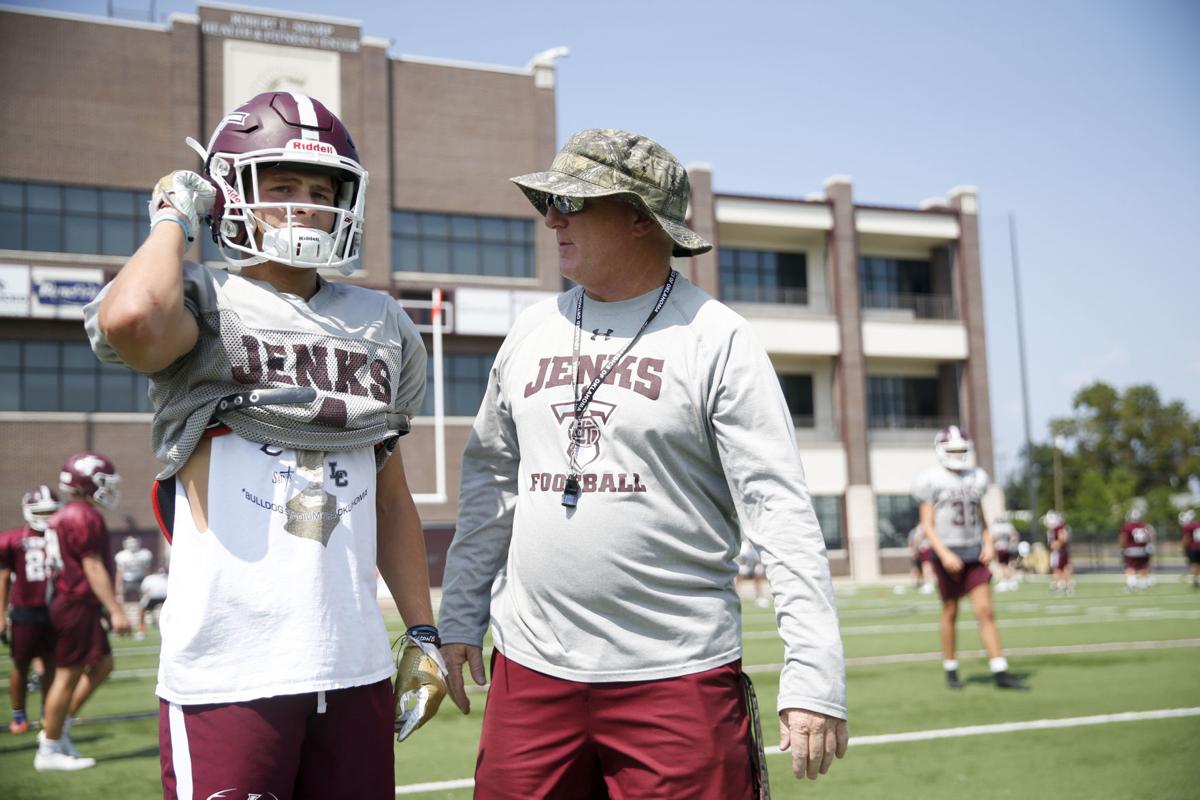 High school football: Other area Class A and B teams at a glance

High school football: Five guys who are on the verge

Correction: This story originally had an incorrect last name for Tramaine Thompson. The story has been corrected.

Keith Riggs said he put off moving into Allan Trimble’s office for as long as possible.

Almost everyone knows the Trojans’ new head football coach is replacing a legend.

Over his 22 seasons, Trimble amassed 13 state titles, more than any other Oklahoma high school football coach. He resigned in March due to the debilitating effects of incurable amyotrophic lateral sclerosis, or Lou Gehrig’s Disease.

“I think the circumstances of Allan’s retirement because of ALS were hard on everybody,” Riggs said. “To me, this is still Allan’s office, even though I’m sitting in it. It just doesn’t feel right.”

Riggs hasn’t yet mounted a plaque or photograph on an office wall. That’s unusual for a coach who has been involved in seven state championship teams in 15 years with the program.

“Decorating your office is the last thing you want to do when you’re putting together a staff and trying to make all of those things mesh,” Dillingham said.

By all accounts, Riggs has set a blistering pace since being named as Trimble’s successor May 7. Along with hiring new assistants, he led the program through spring and summer work, spoke to booster groups and attended to various other issues inherited with the new role.

“You have an idea of the demands,” Riggs said, “but until you’re in this position, you can’t know everything that’s involved.”

“Fortunately, we have such great support here, and our booster club has been awesome. I’ve got some veteran parents who have been through this before, and all of them have certainly made the transition smoother,” he said.

On Friday, the 52-year-old husband of Nancy and father of adult daughters Kelsey and Alexandra will walk the sideline as a head coach for the first time as the Trojans visit arch-rival Bixby to open the 2018 regular season.

By any measure, the Trojans’ 7-5 season was a letdown, even if they came back to win seven straight games and reached the 6A, Division I semifinals. When a school has played in 24 state finals and won 16 gold balls, getting that far just isn’t enough.

Has Riggs spent his first 3½ months rebuilding confidence in the program?

“Maybe more (for people) on the outside than on the inside,” he said. “The expectations of this program haven’t changed because we had a down year.

“You really don’t have to say anything to these young men. Twenty-three of our 27 seniors have been playing Jenks football since the third grade. They know all about the program. They know about the past, and they want to be a part of the future. They want to create a legacy for teams to come.”

Riggs was Trimble’s defensive coordinator for the past eight years, a span that produced four gold balls (2012-15), one state runner-up and three semifinal finishes.

Dillingham said the Trojans received approximately 25 applications for the head coaching job but that insiders always viewed Riggs as a viable candidate, along with other coaches in the program.

“(Riggs) was Allan’s go-to guy. He worked a lot in the office with Allan, so I would think he was probably (Trimble’s) closest confidant,” Dillingham said.

Riggs said he is quietly confident about the job. If there is huge pressure hanging over his head, he is simply working too hard to worry about it.

“I feel confidence comes with experience,” he said. “I’m sure that at some point down the road — and it may not be until December — I’ll be able to sit back and reflect on the new role. Right now, we’re just trying to get ready for the next day and the next opponent.”

In all, Riggs had to replace seven men from last year’s staff. Greg Calabrese and Dan Nickles were promoted as offensive and defensive coordinators, and former Trojans standouts Tramaine Thompson and Trent Taber were among the new hires.

“(Thompson and Taber) are gonna be pluses, even though they are first-year coaches,” Riggs said. “They know the program and what our expectations are. They bring a familiarity, and our kids know all about them, so there’s an instant respect there.”