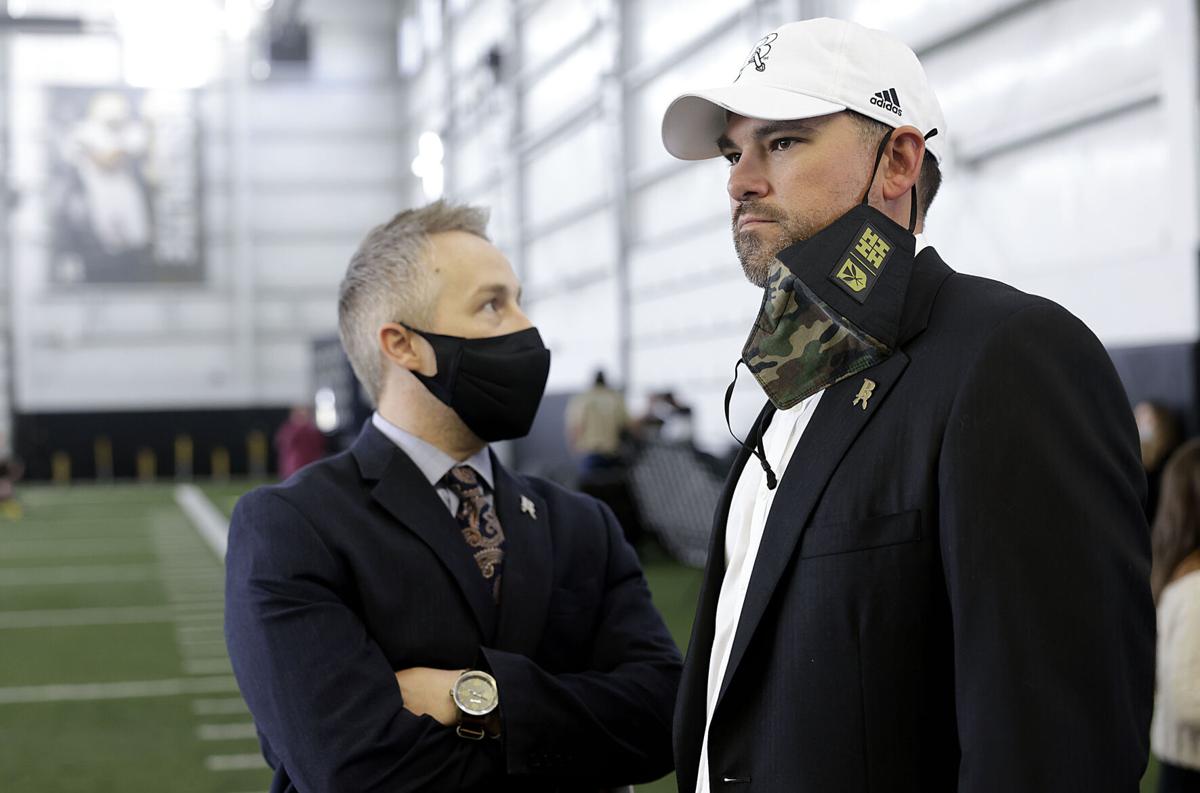 New Broken Arrow football coach Josh Blankenship (right) speaks with executive athletic director Steve Dunn as he watches the team work out after he was introduced as coach Friday. 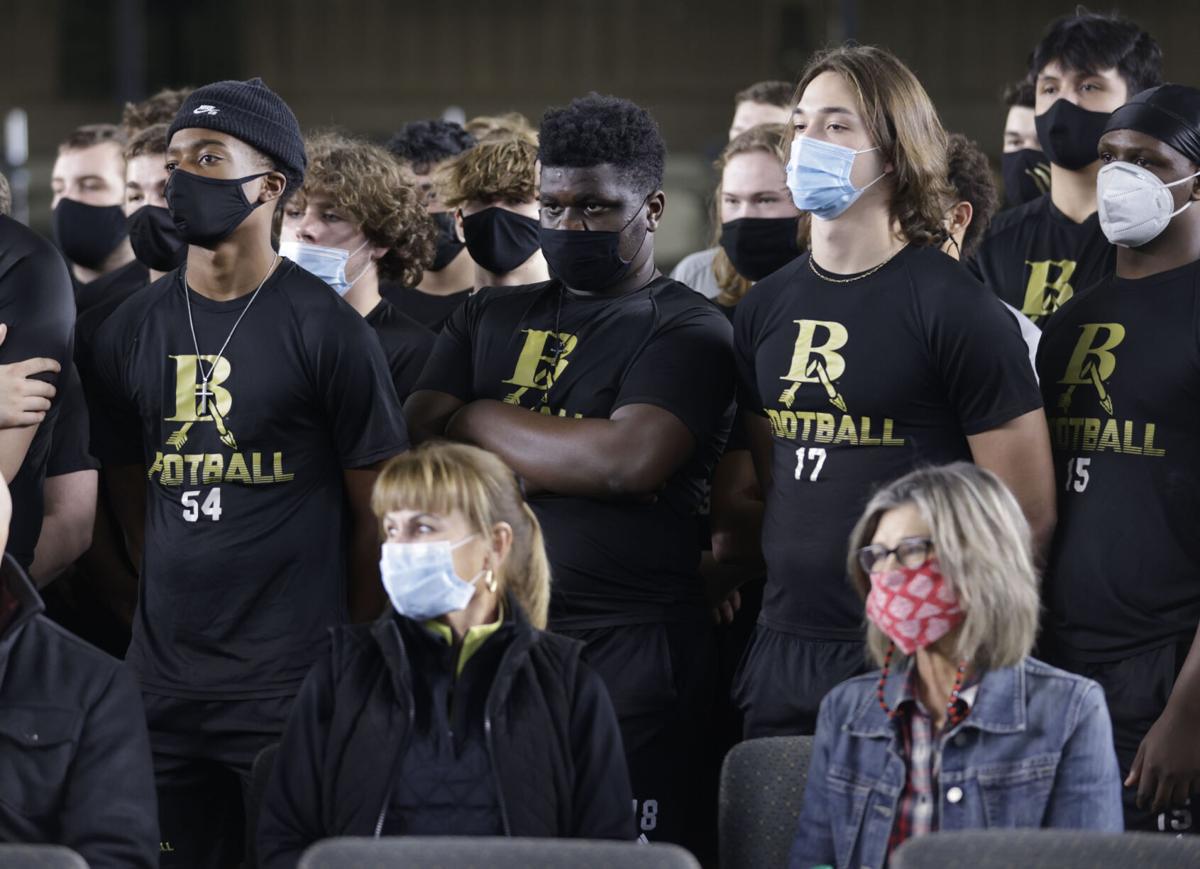 BROKEN ARROW — Broken Arrow officials are looking at more than Josh Blankenship’s recent win-loss record with their selection of him to lead the Tigers’ football program, which captured the Class 6AII state title in 2018.

Blankenship, a Union graduate who was introduced officially Friday afternoon after being approved by the Board of Education as Broken Arrow’s new head coach, was 8-21 in three seasons at Muskogee’s helm from 2011-13. He had a pair of 4-7 seasons at Adams State in 2018 and ‘19, although those matched the Grizzlies’ most wins in a year since 2013.

“Josh has an unmistakable passion for using football as a vehicle to truly create a lasting legacy in these young guys,” Broken Arrow executive director of athletics Steve Dunn said after Friday’s news conference that was attended by the Tigers players at their indoor practice facility. “And what stood out was his ability to set that high standard and in that daily process holding the coaches, the players accountable to the standard that they all develop together.

“We believe through those relationships they forge as a team and as a program that the sky’s the limit and the focus is championship culture and it leads to championship football.”

“Josh has the intangibles,” Dunn said. “What he’s done as an offensive coordinator everywhere he’s been, in developing quarterbacks and a high-flying offense that can light up a scoreboard, sure that’s been evident. But it’s the other stuff I mentioned. It’s that passion he has of building young men and in setting that high standard. It’s a daily process, and to have somebody who believes in that is going to be an incredible thing.”

Adams State interim athletic director Katelyn Smith said in a press release, “We wish Coach Blankenship nothing but the best with his future endeavors. We appreciate the time he has spent with Adams State and everything he has done for the program.”

As excited as Blankenship is about returning home to Oklahoma, it wasn’t easy for him to depart Adams State.

“The hardest thing about leaving a place is leaving those relationships,” Blankenship said. “And the thing that makes up for that is the hope for new relationships.”

Blankenship, 40, an assistant on five Union state championship teams, believes he is more prepared for his second high-school head coaching job than his first at Muskogee a decade ago.

“I would have told you that I was ready for the Muskogee job 10 years ago, but I don’t know that I was,” Blankenship said. “I feel more equipped, more seasoned, more experienced. There’s no substitute for experience. You tell that to your players — that until they get reps, they’re really not going to grow until they’re in the fire. I feel much more prepared and equipped for this opportunity, for sure.”

Broken Arrow associate athletic director Darren Melton has been impressed by Blankenship since the late 1990s — back to when Melton was Jenks’ defensive coordinator and Blankenship was Union’s quarterback.

“He was a nightmare to coach against,” Melton said. “He had the talent and you could see then his football IQ was really high. But he is even more impressive developing young men and being a family guy.”

Last fall while Broken Arrow went 7-4 and lost in the 6AI quarterfinals to Union, Blankenship didn’t have any games to coach as Adams State postponed its season until this spring due to COVID-19.

“It was brutal,” Blankenship said about fall without coaching football. “I’ll continue to take pride in culture and family, but how do you do family on Zoom? That’s really hard. When (NCAA decision-makers) voted for our guys not to play, it was really hard to get creative to keep the players engaged. Everybody is dealing with it across the country in different ways, but it was difficult.“

Blankenship hasn’t made any decisions on his coaching staff.

“(During the next week) I’ll take inventory of everybody there,” he said. “I’m going to meet with everybody, but I’m not coming in with any assumptions either way (or with a plan) to blow everything up or leave everything the same. I just want to get to know what’s going on and what everyone is all about.”

Blankenship is returning to high school football after seven years at the collegiate level.

“I think there’s going to be a transition,” Blankenship said. “But I do also believe coaching is coaching. It has been kind of fun to switch the mindset, spinning the Rolodex on potential coaches because I hadn’t thought that way at the high school level in a while, so that was a transition for sure.”

Blankenship is not Broken Arrow’s first head coach with strong Union ties. Those include longtime Union assistant Steve Spavital, who led the Tigers from 2010-13, and Rick Jones, who guided Broken Arrow from 1995-2003. Blankenship’s father, Bill, was Jones’ successor as Union’s head coach in 1992.

The Broken Arrow job had been open since David Alexander, the head coach for the past seven seasons, was dismissed on Nov. 30, opening up an extensive search for his successor.

“We had some fantastic applicants who were interested in this position, and it is one of the best football jobs in the country,” Dunn said. “And we feel like through the process, Josh emerged and stood out as the perfect guy to lead this program.”

Gallery: A look back at Josh Blankenship's career so far

2020-21 All-World wrestling: Meet the athlete of the year finalists and see the rest of the first team and honorable mention

Here are the best wrestlers in the Tulsa area. The 2020-21 All-World event, presented by Bill Knight Automotive, will be June 29.

2020-21 All-World boys swimming: Meet the athlete of the year finalists and see the rest of the first team and honorable mention

Here are the best boys swimmers in the Tulsa area. The boys swimmer of the year will be announced at the 2020-21 All-World event, presented by Bill Knight Automotive, will be June 29.

2020-21 All-World girls swimming: Meet the athlete of the year finalists and see the rest of the first team and honorable mention

Here are the best girls swimmers in the Tulsa area. The girls swimmer of the year will be announced at the 2020-21 All-World event, presented by Bill Knight Automotive, will be June 29.

Bowman, with a 150-127 record, has the second most wins in Webster history behind Bill Allen.

Pitched his third no-hitter of the season, striking out 13, and was named player of the week for the second time in 21 days.

Broken Arrow is led offensively by forward Brianna Castleberry, who scored the insurance goal against Booker T. Washington and tops the squad with 22.

New Broken Arrow football coach Josh Blankenship (right) speaks with executive athletic director Steve Dunn as he watches the team work out after he was introduced as coach Friday.