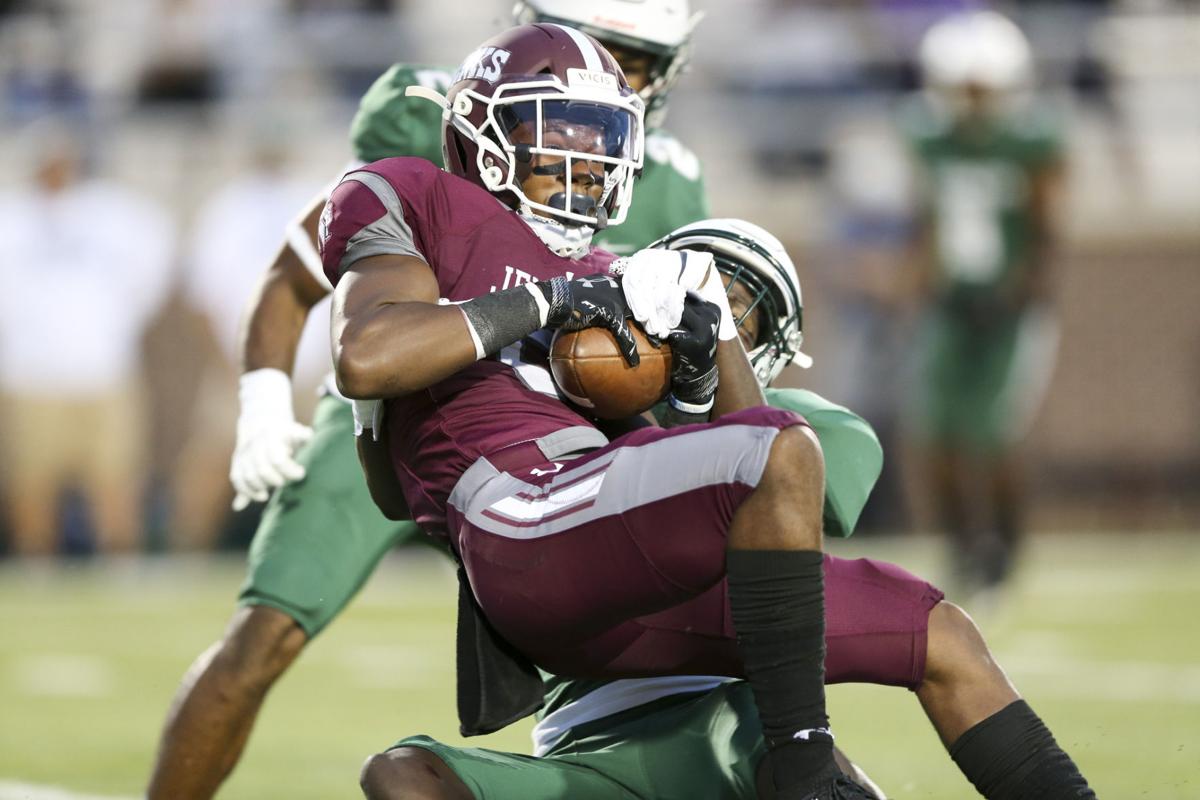 Jenks’ Jayden Patrick secures a catch while being tackled by Muskogee’s Seneca Collins on Friday. In two games, Patrick had seven catches for 244 yards and two TDs. IAN MAULE/Tulsa World 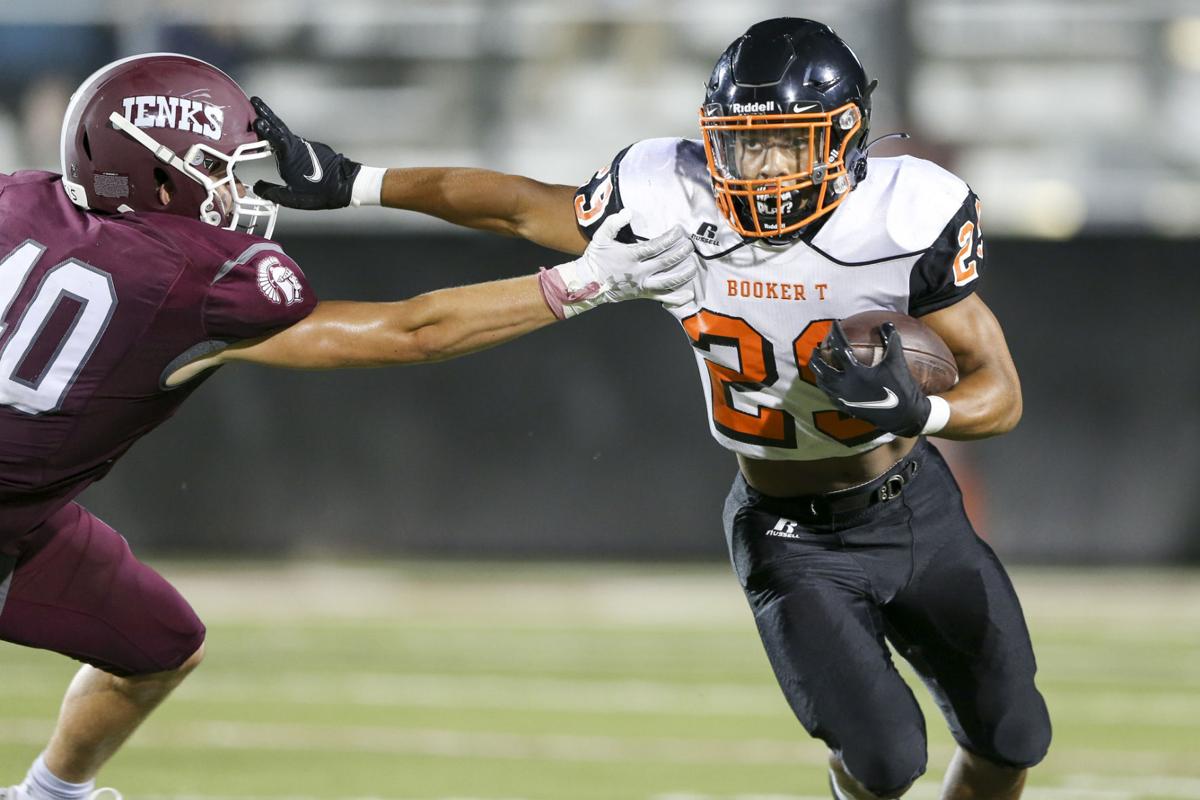 JENKS — Bartlesville’s Braeden Winters is one of the area’s top linebackers and thankful that he was able to start his senior year Friday night in the Jenks Trojan Preview despite the threat of COVID-19 that hovers over football.

“I’m very excited to be playing, blessed that we even have the season,” Winters said, adding that he doesn’t like having to wear a mask to school, but “it’s worth it to be playing football and keep doing all the extracurricular activities.”

COVID-19’s reality hit home for the Bruins this week as head coach Jason Sport tested positive for the virus.

This week was the first time in 20 years of coaching that Sport missed a day of work. Sport said by telephone Friday night that he was feeling better after starting breathing treatments and is “getting close to conquering it.” He looks to be back before the season opener Sept. 4 against Claremore.

“We’re trying to be as safe as we can,” Sport said.

Sport, with the benefit of a video stream, watched from home as his team lost 14-9 to Putnam City in a half-game scrimmage Friday at Allan Trimble Stadium.

“This has been a long, tough week, but I was really proud of our kids. They gave a great effort,” Sport said.

Among the highlights for Sport were several red-zone stops by the improved Bruins’ defense, which averaged allowing 37.5 points during a 3-7 season in 2019. Putnam City’s winning TD on Seth Wisby’s 9-yard run early in the second half was set up by a fumbled snap on the play after a Bruins’ red-zone stop.

”I thought we started off well and really rallied to the ball,” Winters said. “I thought we played a good second half, we just made a couple mistakes and allowed them to keep drives going, but I thought we recovered well.

I think it is something to build on. I definitely believe we’ll be a lot better and more fundamentally sound defensively this year.”

Associate head coach/offensive coordinator Jason Munoz is leading the Bruins in Sport’s absence. Sport, who has been in quarantine all week, had made plans for this type of situation as he and Munoz had rarely been in the same room this summer.

“Overall, I thought we played and competed well,” Munoz said. “We got a lot of kids reps, and that’s the most important thing. The defense really flew around the ball. One time (on Marcellous Hawkins’ 56-yard touchdown run) we just didn’t wrap up — it’s been a long time since they’ve tackled. We made some critical mistakes — that’s going to happen, but overall I’m thrilled, I’m fired up.

”I wish he (Sport) was here obviously because everybody feeds off of him. He’s part of our family. But what we’ve established in our culture, we kind of just run through it and we’ll be glad when we get him back.”

Added Winters, who had a sack that set up a safety, “Yes, for sure we definitely missed him (Sport). He’s an energy ball on the sidelines. We’re excited to have him back soon.”

The story: Senior receiver/cornerback Jayden Patrick capped off his big night when he caught a 38-yard touchdown pass from Stephen Kittleman with four minutes left to seal the Trojans’ second victory. Patrick set up the possession with a fourth-down sack. Washington avoided the shutout on Lathan Boone’s 27-yard TD screen pass to Jaiden Carroll with 1:07 remaining.

Notable: In the two games, Patrick had seven catches for 244 yards and two TDs. He also intercepted a pass. Kittleman was a combined 10-of-12 for 297 yards. Jenks’ Grant Lohr had a combined 15 rushes for 64 yards and three TDs.

Quotable: Jenks coach Keith Riggs on Patrick: “He has worked really hard and made some great progress on the offensive side of the ball, having not really played it the last two years. He’s going to be an impact player on both sides of the ball.”

The story: Patrick caught four passes for 118 yards and a touchdown, and he set up another TD with an interception. Kittleman was 7-of-8 for 208 yards in a half. Lohr rushed for two TDs.

Quotable: “Just happy we got to play football tonight more than anything,” Riggs said. “It was just a really good feeling to be back on the field. We were very rusty like I kind of expected without all the spring and summer stuff, but I saw a lot of good things.”

B: Safety, ball snapped out of end zone

A Ponca City radio station’s parent company is suing over the live-stream rights to a Bixby-Ponca City football game, set for Oct. 30 in Bixby…

Bill Haisten: Bad news for the rest of 6AI – Union’s impressive recovery from an 0-4 start

After the Union program’s first 0-4 start since 1978 – when Kirk Fridrich was a fifth-grader at Rogers Elementary in Shawnee – there were signs that everything was about to turn.

The ESPN family of networks is headed to Bixby to televise the Spartans’ final regular-season football game against Booker T. Washington on Nov. 5.

Skiatook also will be playing Monday night at Cleveland.

In 4A-3, Asher Brewer leads Cleveland's upset over No. 5 Skiatook while Kadian Forbis scored three TDs in Grove's victory over Oologah.

Jenks’ Jayden Patrick secures a catch while being tackled by Muskogee’s Seneca Collins on Friday. In two games, Patrick had seven catches for 244 yards and two TDs. IAN MAULE/Tulsa World