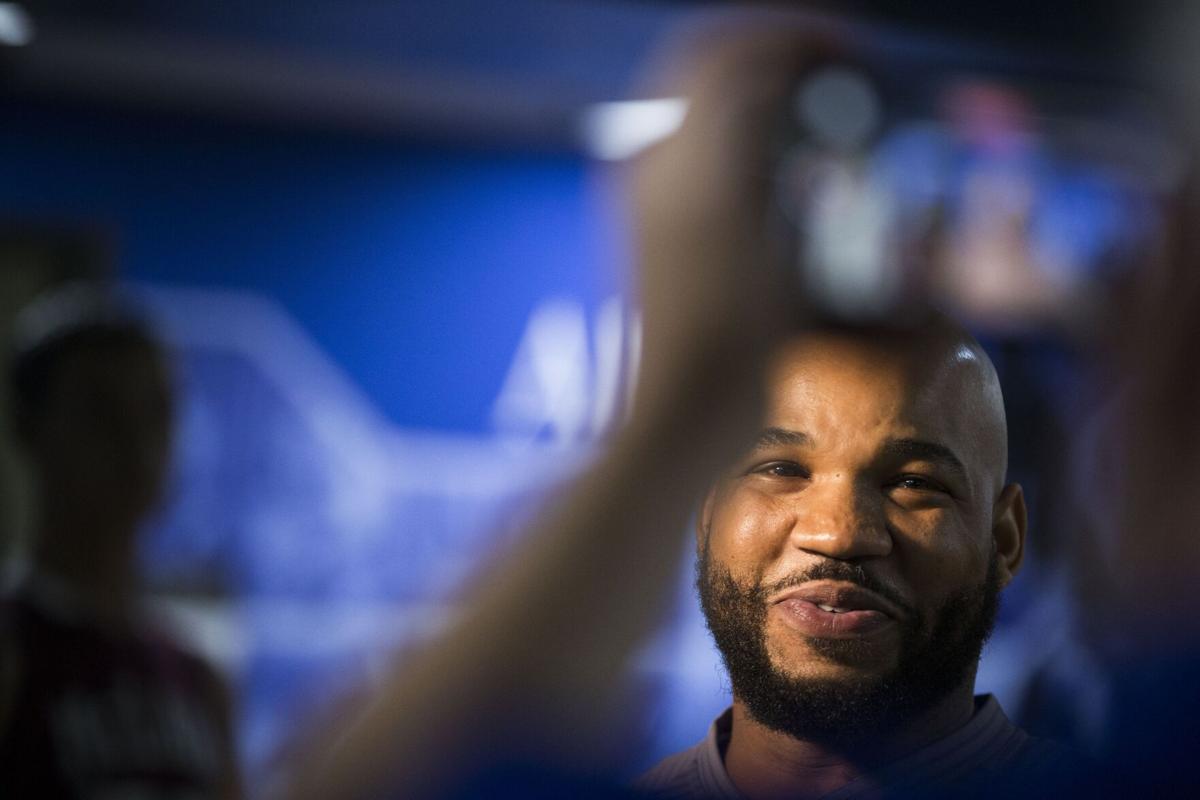 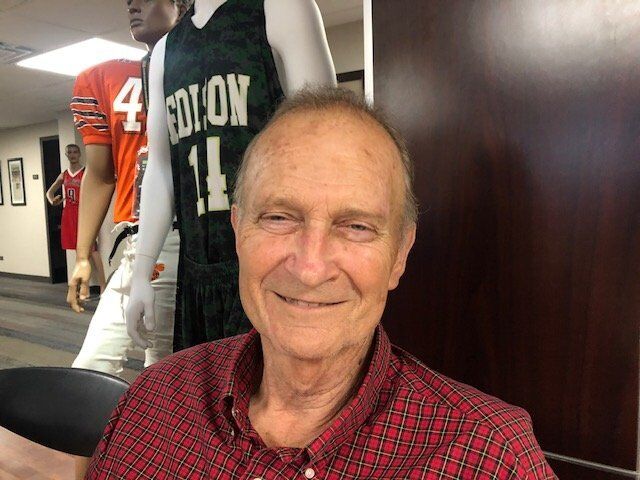 Former East Central coach Rodger Lefler at the Tulsa Public Schools athletic office before being inducted into the TPS Athletics Hall of Fame on Thursday. 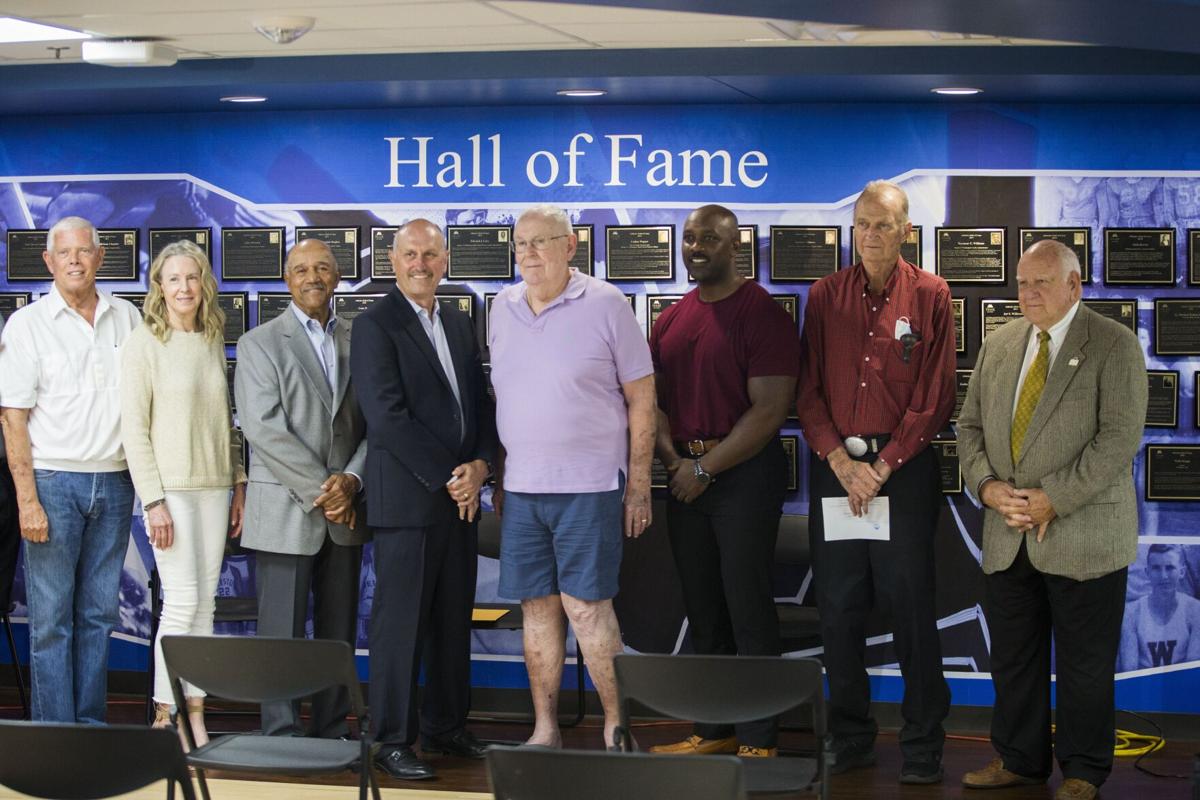 This is a special week for former McLain and University of Tulsa football standout Shawn Jackson.

Jackson will be honored at two hall of fame inductions in three nights — especially impressive for someone who is only 30 years old.

“Is it real, am I getting punked?,” Jackson said about his reaction when TPS athletic director Gil Cloud called him with the news about his TPS selection. “But definitely it was joy.

“I was super surprised when I got that call (from McLain) as well. ... It’s a great feeling.”

Jackson is the youngest to enter TPS’ hall. Does that mean anything special for him?

“Just a little pressure, that’s all,” Jackson said with a smile during a press conference at the TPS athletic office before the banquet. “I didn’t expect it, so it’s even more gravy. I’m just more appreciative that I was worthy at 30 to go in. It’s a great feeling, an honor.”

Jackson, a 2009 McLain graduate, had career totals of 8,422 total yards, 95 touchdowns and 522 tackles as a quarterback/linebacker. As a University of Tulsa linebacker, he was the Golden Hurricane’s top defensive player in its 2012 Liberty Bowl victory and the 2013 Conference USA defensive player of the year. At McLain, Jackson also was a basketball standout who played for another TPS Hall-of-Famer, John Phillips.

“Basketball was my first love, it’s just something I always did,” said Jackson, who then added with a smile. “But I figured out after going to some AAU tournaments I needed to play college football.

“Playing both sports was a joy and playing in the state (basketball) tournament was a great feeling. I still talk to Coach Phillips and he definitely made a big impact on my high school career and even in college — just having that person I could talk to.”

Jackson is still involved with football as a youth coach and he began officiating high school games last year. He calls that “my new passion.”

The next two youngest members of the TPS Hall are Jones and Floyd, who were 2005 TPS graduates. Jones was the Tulsa World’s state football player of the year in 2004 with 2,282 rushing yards and 48 TDs for Booker T. Washington. He was an All-American kick returner at Arkansas in 2007 and played in the NFL from 2008-13, primarily with the Dallas Cowboys.

During his speech Thursday, Jones thanked two BTW basketball coaches he played for who are both in the TPS Hall of Fame, “Nate Harris who was a great coach and a great inspiration to me and coach (Mike) Mims. There is so much greatness in that school.”

Floyd was a World All-State first-team selection at defensive end for East Central. In 2011, he joined the Tulsa Police Department and spent two years as TPD’s first community resource officer. In 2017, he was one of the Tulsa World’s “Tulsans of the Year.”

“I was in tears,” Floyd said about his reaction when informed of the TPS honor.

“Felix and I played AAU basketball together,” Floyd said. “You knew just by watching him outside of the school that all he did during a game is what he practiced outside of those stadiums, and seeing what he accomplished, you knew that he deserved it.

“I’m just glad a lot of us who grew up with him can tell our kids that hard work pays off.”

Floyd said with a smile, “I can tell my kids I tackled Felix all the time.”

For Floyd, “sports was a way to level the playing field” after he was diagnosed with a learning disability.

Lefler coached East Central to the Class 4A state baseball title in 1970 and led the Cardinals to a pair of state basketball tournament berths.

“I appreciate this, it’s quite an honor, I was really surprised,” Lefler said. “I had some really good athletes and their parents made a difference.”

Admire was a basketball standout for Webster in 1960 and had a 43-year career with the Marine Corps. He was a Senior White House Military Aide for President Carter and retired as a major general. He said he was “grateful” to have played for TPS Hall of Fame coaches Bill Allen, J.V. Haney and Gene Shell.

“I survived on the battlefield because of what I learned on the Tulsa sports fields,” Admire said.

MacKenna was Knox’s coach on Memorial’s state baseball champions in 1980 and ‘81. Knox and Rupe, a Hale graduate, were pitching teammates at Oral Roberts.

Harmon was the World’s 1965 state basketball player of the year with Central and played four seasons at Kansas. He was represented at the banquet by his KU coach, Ted Owens.

Kraft Yandell, a 1973 Edison graduate, was among the nation’s elite junior tennis players and won the girls 14-under national doubles title in 1969.

Billings won a state wrestling title for Webster in 1953, was on two NCAA title teams at Oklahoma State and coached five seasons at Webster, where he was principal from 1984-94.

Hogg, a 1960 BTW graduate, was a team captain in football and baseball. In the early 1970s, he was Tulsa television’s first black news anchor at KOTV.

I was absolutely shocked when I received my call from Gil Cloud,” Hogg said. “I am truly honored and most grateful for this recognition.”

Villareal, a 1933 Central graduate, coached Rogers to its only state wrestling title in 1958 and was inducted into the National Wrestling Hall of Fame in 1995.

Cloud recalled that when he was Union’s AD, the personable Villareal was a regular at attending that school’s annual wrestling tournament, but would never watch any of the action. Villareal had coached Cloud at Rogers.

“He would sit in the hospitality room for eight hours and tell stories,” Cloud said with a chuckle.

How could the rest of the Bucks Nets series shape out?

The East sweeps the West in 6A and 5A.

Former East Central coach Rodger Lefler at the Tulsa Public Schools athletic office before being inducted into the TPS Athletics Hall of Fame on Thursday.