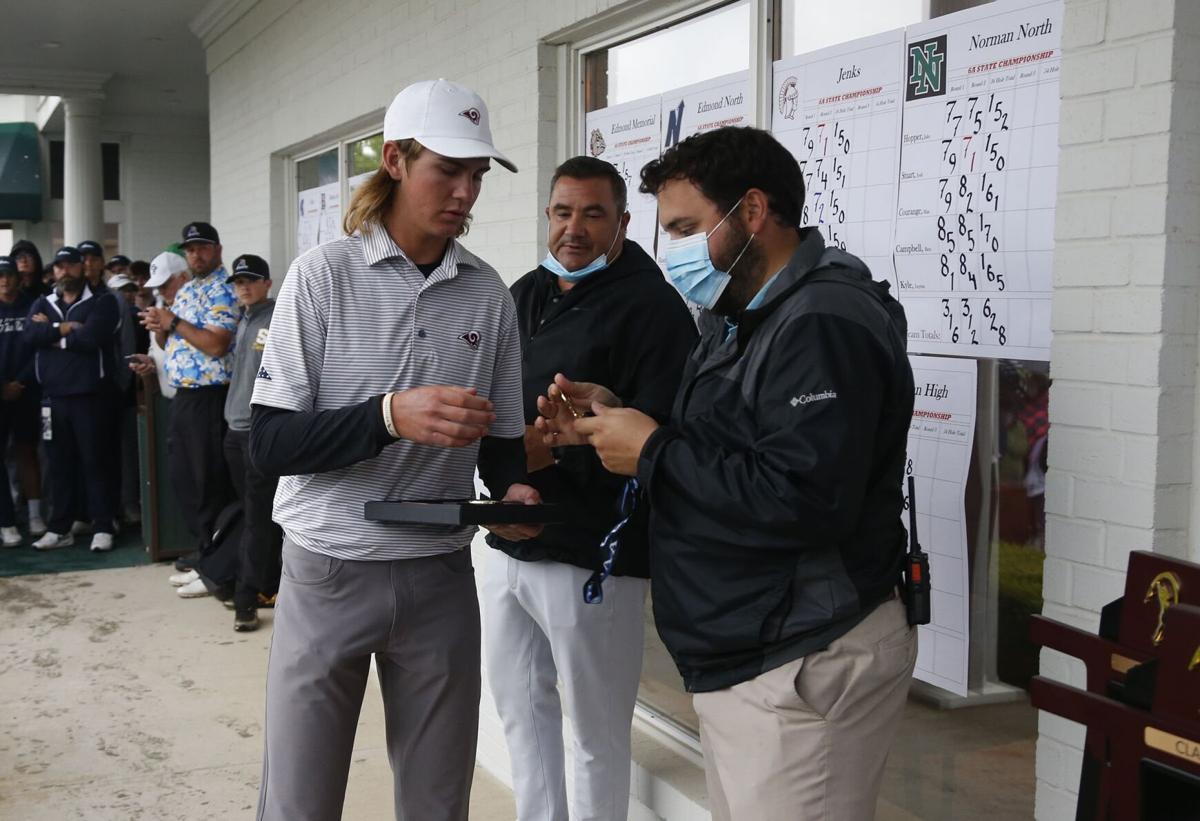 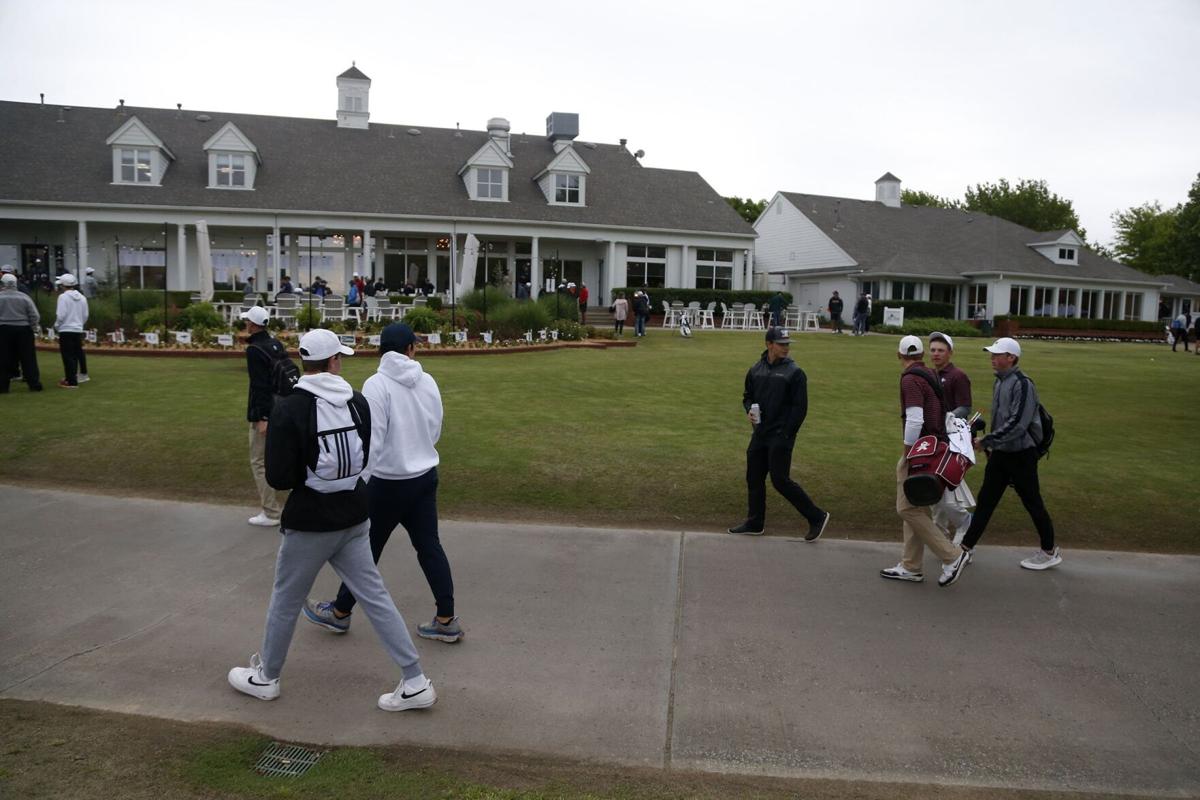 Fans and players head into the clubhouse area during a weather delay at the Class 6A boys state golf tournament Tuesday at Forest Ridge in Broken Arrow. Tuesday’s final round was called off because of the weather. 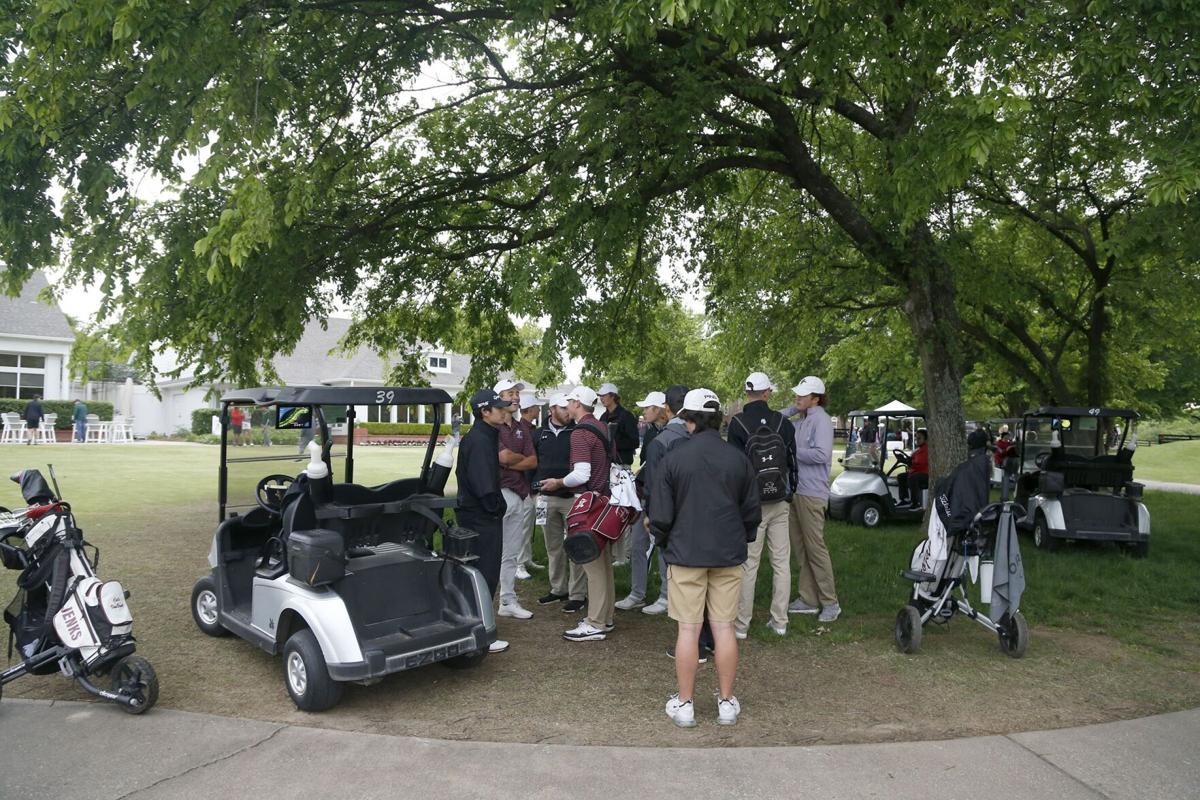 Jenks players take cover during a weather delay at the Class 6A boys state golf tournament Tuesday at Forest Ridge in Broken Arrow. Weather forced the cancellation of the final round of the tournament.

BROKEN ARROW — Ben Stoller’s Tuesday included a nap in his truck, Anakin Skywalker, buckets of rain, hours of wait and something that made it all worthwhile.

Scores from the state tournaments.

“It was a big goal of mine,” Stoller said under an awning at soaked Forest Ridge Golf Club.

Stoller already had a 6A team title. That came two years ago in Edmond when his second-round 68 helped propel Owasso past perennial champion Edmond North.

North came back to reclaim the team title Tuesday when late morning/early afternoon rainfall drenched the course and prompted the cancellation of the scheduled third round. The Huskies’ 14-shot lead from Monday’s 36 holes became their margin of victory over second-place Jenks.

How was he playing Tuesday before the rain came?

“I was putting really well. I made two 25-footers for par,” he said. “But I was hitting it everywhere. I was not striking the ball. I was one-over through seven. I had an outside look at birdie on the hole whenever they called it. I was starting to hit it well right before they called it. The putter was feeling great.”

They called players off the course around 10:45 a.m. Stoller headed for his truck and tried to rest.

“I sat there for 30 minutes trying to go to sleep and couldn’t. Actually, I dozed off a little bit,” he said. “I watched ‘Star Wars, Revenge of the Sith’ for a while.”

Two hours later, the course was deemed too waterlogged to finish the tournament. Monday’s results stood.

“I wish they wouldn’t have called it. I would have loved to compete,” Stoller said between congratulations from fellow golfers. “But that’s how it happened.”

Everyone was bummed about the rain. Shaun Stoller, Ben’s dad, collapsed his umbrella and it sounded like one of those overfilled pails of water spilling down on a kids’ splash pad.

But the medal Stoller was wearing made the cold, wet day completely bearable.

“He played really good golf yesterday and started out well today,” Shaun Stoller said. “Disappointed in the weather, that we didn’t have the full experience with 54 holes. But for the experience we got, he played better than anybody else.”

Shaun and Angie will follow their son through a June that includes junior amateur events in Edmond, Lake Forest, Illinois, and Nicholasville, Kentucky. They’ll help see Ben through his senior year at Owasso, then will watch him play for their alma mater at Kansas State.

“We’ve bled purple since the day I was born,” the 17-year-old Stoller said. “That’s the only team we ever cheer for.”

“I have the cutest picture of Ben from when he got his first set of golf clubs from my dad. He was two,” Angie Stoller said. “My dad bought him his first non-plastic set of clubs and we went to the driving range in Kansas City. A putter, a driver and an iron in this little bag.”

Ben has graduated to bigger and better tools since then, but his passion for the craft hasn’t wavered at all.

The winning is pretty sweet, too.

“Just to come back (from the 2020 season canceled by COVID-19) and have a good season, and be back in a competitive nature with my team and my friends,” the state champ said, “that’s just a great feeling.”

Photos: Closing day of the 6A state golf tournament

Fans and players head into the clubhouse area during a weather delay at the Class 6A boys state golf tournament Tuesday at Forest Ridge in Broken Arrow. Tuesday’s final round was called off because of the weather.

Jenks players take cover during a weather delay at the Class 6A boys state golf tournament Tuesday at Forest Ridge in Broken Arrow. Weather forced the cancellation of the final round of the tournament.