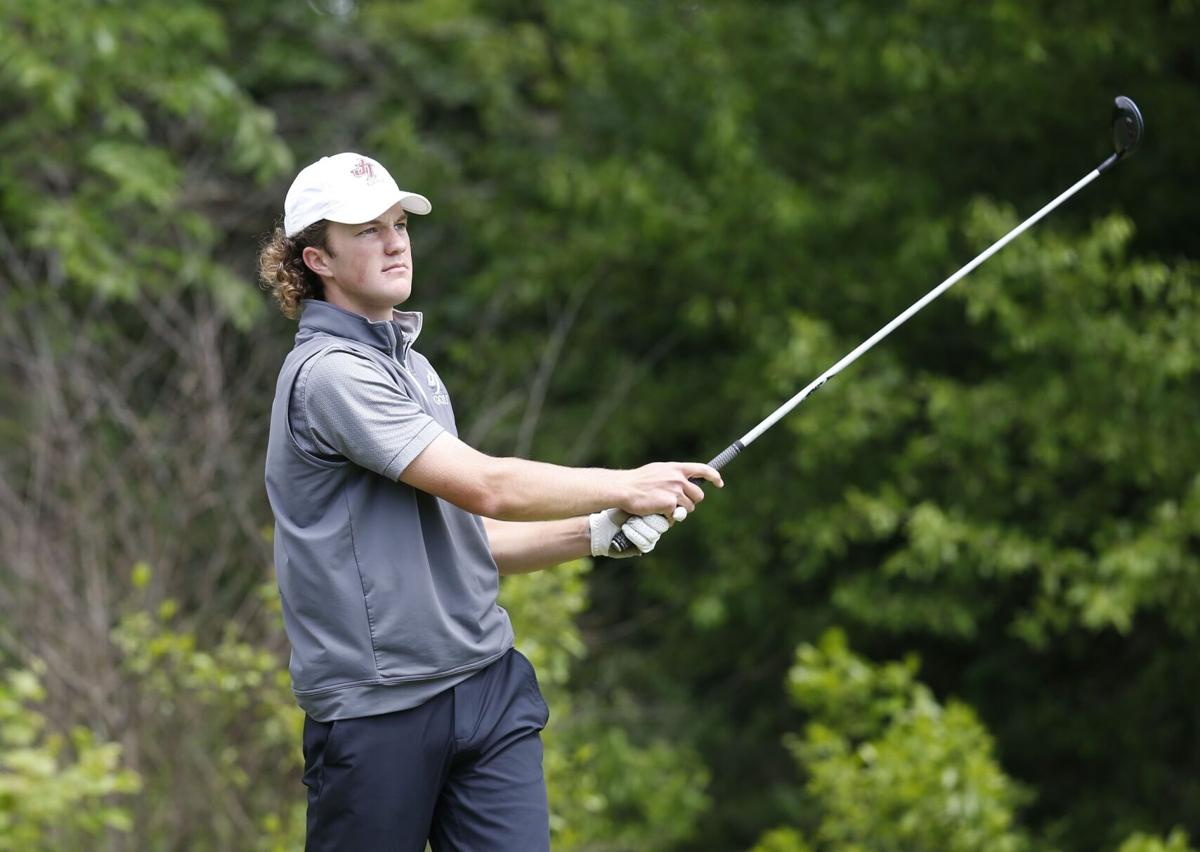 Jenks’ Cale Vanbrunt watches his shot at the Class 6A boys state golf tournament Monday at Forest Ridge in Broken Arrow. Vanbrunt fired a two-round total of 156 and Jenks sits in second in the team standings with one round to go. 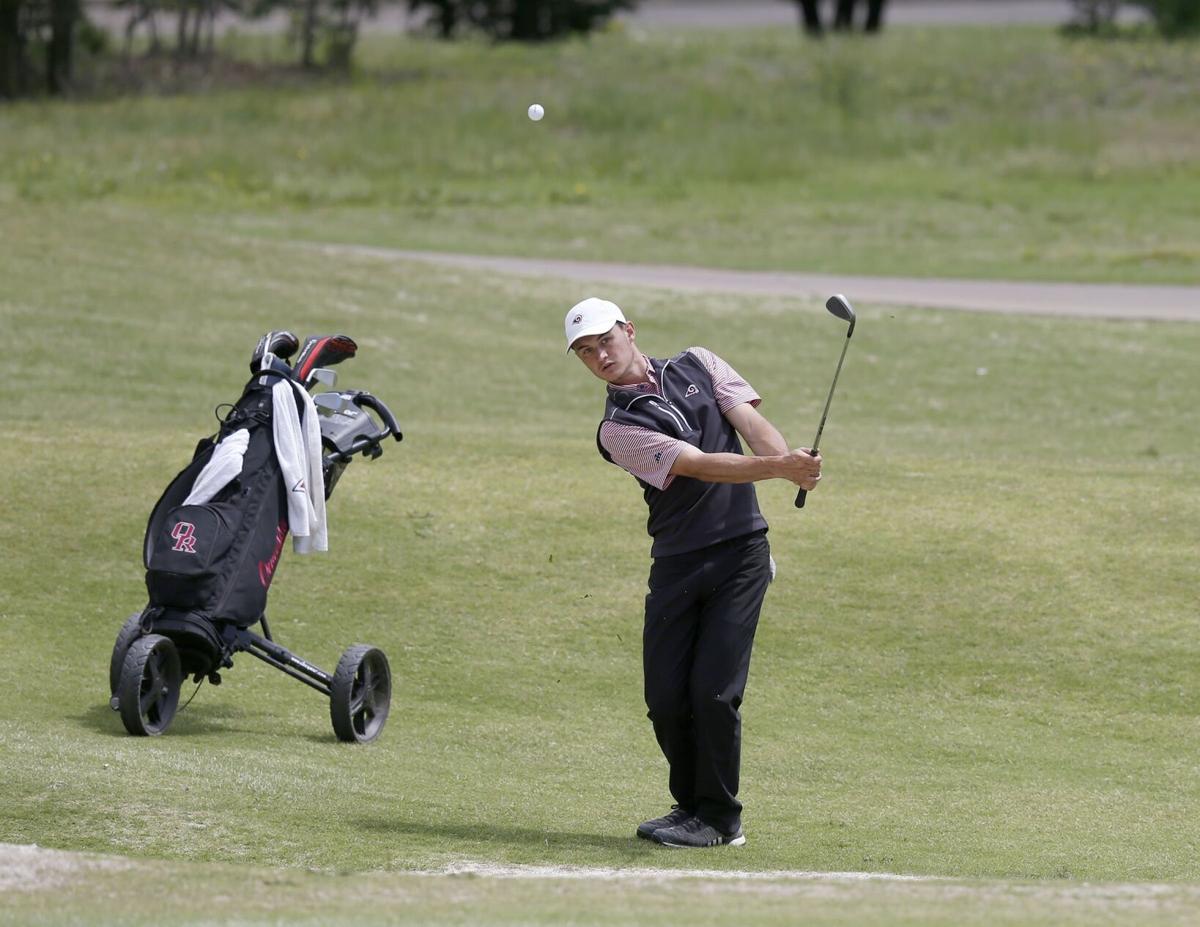 BROKEN ARROW — Monday was a good day for Ben Stoller.

The Owasso junior shot back-to-back rounds of 70 to take the individual lead in the boys’ Class 6A state golf tournament at Forest Ridge Golf Course.

“I played solid, I just needed to make a few more putts, but that’s how golf usually goes,” said Stoller, who tied for seventh as a freshman in 2019, the last state championship played, since last year’s was wiped out by the pandemic. “I missed a little short one on the final hole, just missed by a little bit, but I’ll get it back tomorrow.”

Heading into the third and final round on Tuesday morning, Stoller holds a one-stroke lead over Edmond North’s Jordan Wilson, who won the individual state title in 2019. Stoller knows the best way for him to claim the championship is to not let his thoughts get too far ahead of himself.

“I’m just going to take it one shot at a time, get up there, hit as many fairways and greens as possible, and if I have a good-looking birdie, get a little aggressive, but if I don’t, make my par and get out, on every hole,” Stoller said. “Obviously, I want to go win it, but I’ve still got to play good golf, because there’s a lot of good players I got to beat. Just worry about myself, because at the end of the day, I can’t make someone else play worse, I just can play better myself. That’s the goal.”

Dylan Teeter of Bixby, who won the 6A East Regional last week, sits third after shooting one-under par 143 (72-71) for the day. He noted how much of a factor the wind was.

“With the wind playing, it was pretty tough today, so I just wanted to make sure I put it in the right positions, and I believe I did it pretty well,” said Teeter, who placed 15th in 2019. “At this place, the wind is just brutal, no matter where you’re at.”

Muskogee’s Mesa Falleur, who tied for second at the East Regional one shot behind Teeter, was fourth with 144 (74-70), but wasn’t particularly impressed with his performance.

“It was kind of a tough day for me today, I didn’t have the best time on the greens, but I fought through it, ended up even par for the day,” Falleur said. “I hit the ball pretty well today, covered the flag sticks, but just didn’t make the putts coming back. It was kind of a frustrating day, but it worked out.”

Team-wise, Edmond North enters the final round with a commanding 14-shot lead, 593-607, over second place Jenks, which shot an impressive 291 in the second round to jump over several teams after a first-round of 316.

Edmond North has won 13 of the past 15 state championships and was already considered the favorite, so the task looks daunting for the rest of the field. After shooting 309 in the first round and 303 in the second, Broken Arrow sits third, another five strokes back of Jenks.

“We just have to have a good day tomorrow, we’ve got to go lower,” said Broken Arrow coach Dakota Beller, whose team won the East Regional by eight strokes last week and is seeking its first-ever state title. “I think the conditions are going to be a little bit worse, so hopefully, we can battle through that and put up a good score.”

Stillwater, which was second at the East Regional, had a great opening round, shooting a 299, which tied Edmond North for the lead, but the second round didn’t go as well. After a disappointing 318, the Pioneers now sit tied for fourth, 25 shots back of Edmond North and six back of Broken Arrow.

“I think we were a little bit gassed, but we’re close,” said Stillwater coach Kyle Lucas of the second round. “We know where we need to make up our strokes. I think we have a good game plan, we just have to go out and execute and see where the shots fall, give ourselves a chance and see if we can put a little pressure on Broken Arrow and Edmond North.”

With some inclement weather expected Tuesday morning, the golfers were bracing for less favorable conditions.

“It’s supposed to rain, I think it’s a high of 58 degrees, so it’s going to be survival of the fittest to see who can be tough mentally and fight through that stuff,” said Bixby coach Glenn Sullivan, whose team is sixth with a 621 after two rounds. “There’s probably going to be some pretty high numbers.”

“Just try to keep the mental game strong,” added Beller of his team’s approach on Tuesday. “If conditions are tough, the course is going to play tough – just keeping them level-headed and shooting their best. Hopefully, we can come out ready to play.”

Photos: First day of the 6A state golf tournament

What teams could make a push for Aaron Rodgers?

What teams could make a push for Aaron Rodgers?

How the MLB's new sticky substance policy can impact bettors

How the MLB's new sticky substance policy can impact bettors

Jenks’ Cale Vanbrunt watches his shot at the Class 6A boys state golf tournament Monday at Forest Ridge in Broken Arrow. Vanbrunt fired a two-round total of 156 and Jenks sits in second in the team standings with one round to go.