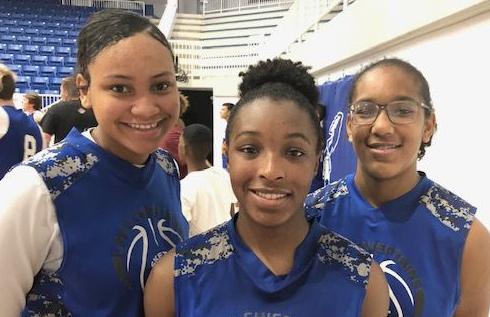 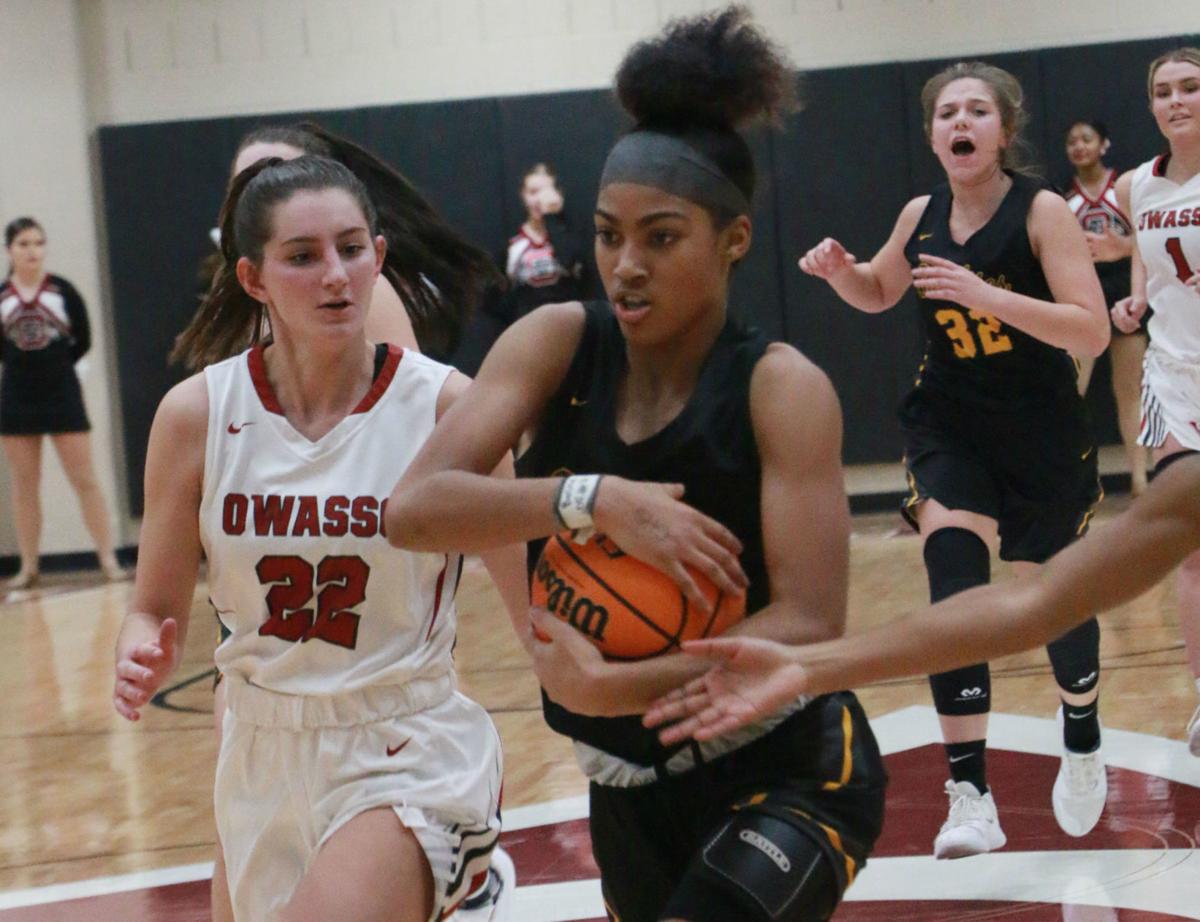 Sand Springs’ Journey Armstead protects the basketball in a 62-45 win at Owasso on Dec. 17. She is averaging 18.1 points per game. KIRK McCRACKEN/Sand Springs Leader 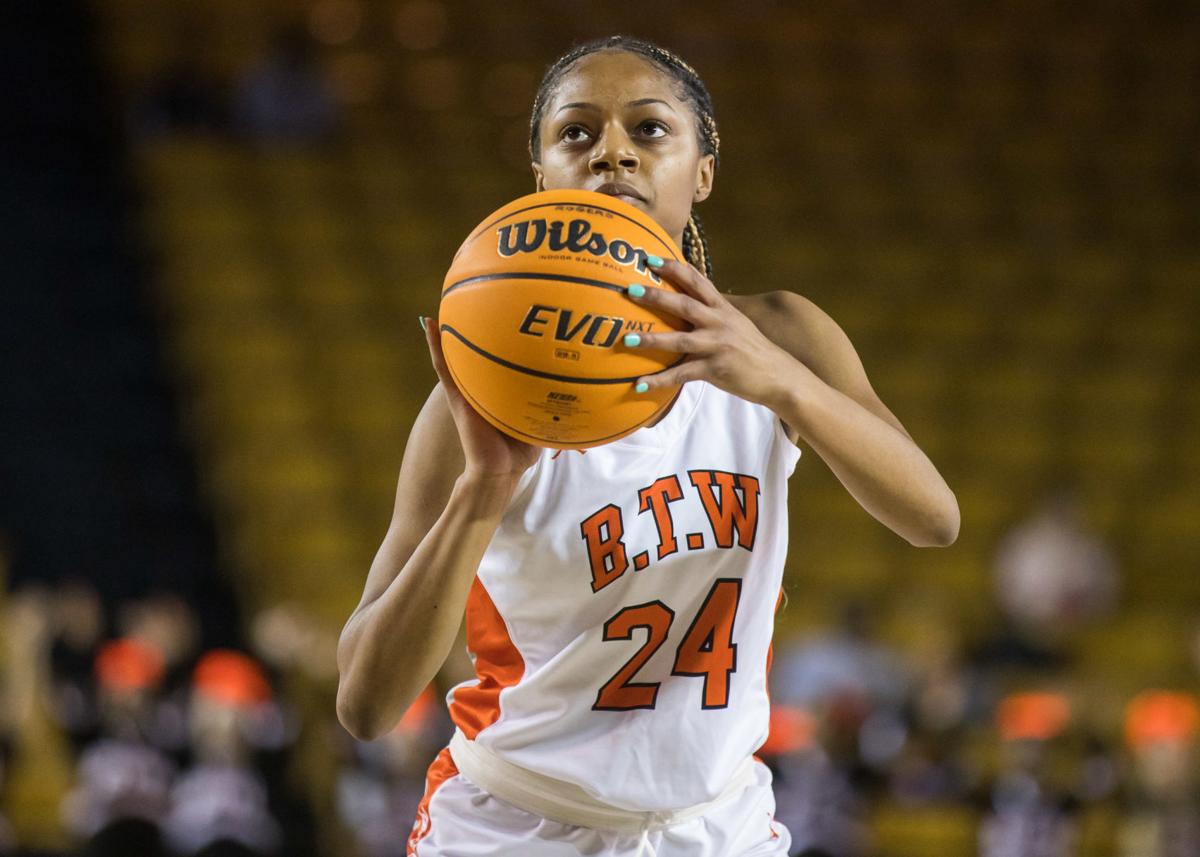 Booker T. Washington’s Wyvette Mayberry was MVP of the Tournament of Champions after scoring 28 in a 77-70 overtime win over Moore in the championship game on December 29. BRETT ROJO/For the Tulsa World

Sapulpa freshman guard Stailee Heard said she’s been dribbling a basketball “since I was in diapers.” That’s not unusual when your parents were University of Tulsa standouts. Her father, Tony Heard, was the point guard on TU’s Elite Eight team in 2000. Her mother, the former Lila Osceola, still ranks seventh in Hurricane women’s career scoring with 1,301 points. Stailee has the speed and skills to rate as a premier collegiate prospect, already holding offers from Tulsa, Oklahoma State and Eastern Michigan. She joins 6-foot-1 junior Temira Poindexter, whose father (Ray Poindexter) was also a TU standout, and senior Ray Osborn in a dynamic threesome that could carry the Chieftains far.

Journey Armstead moved to Sand Springs after helping lead East Central to the 5A state tournament as a freshman, and averages 18.1 points, 3.1 assists and 2.9 steals. On that pace, she will likely challenge Sapulpa’s Heard for Frontier Conference newcomer of the year.

Leader of the pack

Booker T. Washington’s 6A No. 1 Hornets (9-0) are loaded with Armani Reed, Carrigan Hill, Sai Johnson and Aunisty Smith surrounding versatile senior Wyvette Mayberry. Coach Rabu Leyva calls the ORU-bound Mayberry his Swiss Army Knife because “she can do so many things.” This year, she’s averaging 13.7 points, 3.9 rebounds and 3.4 steals and was MVP of the Tournament of Champions.

Lexy Keys helped lead Sequoyah Tahlequah to 3A state titles as a freshman and sophomore and is gunning for another as a senior. The UT-Arlington signee went over 1,500 career points while leading the Indians to the prestigious Bertha Teague Classic title and averages 16.1 points, 4.9 assists and 4.4 steals.

Joe Redmond was Frontier Conference coach of the year in 2019 when the Redskins reached the state tournament for the first time in six seasons. Jayla Burgess, Kaylen Nelson, Takyla Pitts and Makenzie Malham lead a towering squad that allows only 36.7 points per game.

Gracy Wernli, Kate Bradley, Alyssa Nielsen and Meredith Mayes lead a rebuilt squad that seems better than its 4-5 record. The Spartans upset 6A No. 3 Edmond North and their losses are to 5A No. 1 Piedmont and four 6A top-10 teams.

Coach Gary Pitts said the early schedule wasn’t that difficult and the jury is still out, but T.T. Mitchell and fellow seniors Shay Stone, Ariaonna Mack, Jurnee Elliott, Tiffany Robinson, Breonna Blakley and Rashon Griffin have the Cards at 7-0. Mitchell scored 29 as they rallied past 3A No. 2 Christian Heritage 54-49 in the finals of the Chargers’ tournament.

Nakia Cullom averages 13 points and Devin Wright averages eight rebounds to lead the speedy Ropers, whose 2019 state tournament appearance was only their second in 23 years.

The Conquerors have the same suffocating defense as last year when they went to the state semifinals for the first time. OSU-bound Ruth Udoumoh averages 16.7 points and 7.1 rebounds. She and ORU volleyball Jaxie Wakley combine for four blocked shots per game, leading a defense that permits just 32 points per game.

The gang’s all together again for the Warriors, who overcame early injuries last season to win the 3A gold ball. Autumn Hines, Grace Johnson, Mia and Sophie Bagby, Chasee Cooper and Atleigh Branham make Adair one of the state’s most experienced teams.

1. Is the best team in the Metro Lakes Conference really a 4A school?

Grove won last year’s title and is the only team without a league loss this season. Rory Geer was league MVP as a sophomore and appears to be on a similar trajectory as a junior.

2. Who are some of the other top girls players in northeastern Oklahoma?

Rylie Looney and Rhett Looney are Pryor’s top returnees and Linda Brice and Madison Wheat are Coweta’s top returnees. Both 5A schools are seeking a third straight trip to the state tournament.

Oologah’s Karly Wadsworth has more than 1,500 career points. She joined Kiah Purdunn and Baylie DeSpain in leading the Mustangs to fifth place in the Tournament of Champions.

3. Will the OSSAA again select powerful western schools to compete in the eastern half the 6A postseason bracket?

In Monday’s 6A rankings update, six of the top 10 schools were from the west. In last year’s state tournament, Union and Sand Springs joined six western schools on the bracket — unless you’re going to argue that Shawnee is an eastern school.

Holt went 19-15 with three playoff berths in three seasons as Coweta's head coach from 2016-18, including a district title in '18, before returning to Broken Arrow as passing and special teams coordinator, and receivers coach for the past two seasons.

Skiatook’s two of a kind

The Tigers (12-5) are trying to reach the area tournament through the losers bracket for the second year in a row.

Strong first day for Cushing at 4A wrestling regionals

Sand Springs’ Journey Armstead protects the basketball in a 62-45 win at Owasso on Dec. 17. She is averaging 18.1 points per game. KIRK McCRACKEN/Sand Springs Leader

Booker T. Washington’s Wyvette Mayberry was MVP of the Tournament of Champions after scoring 28 in a 77-70 overtime win over Moore in the championship game on December 29. BRETT ROJO/For the Tulsa World