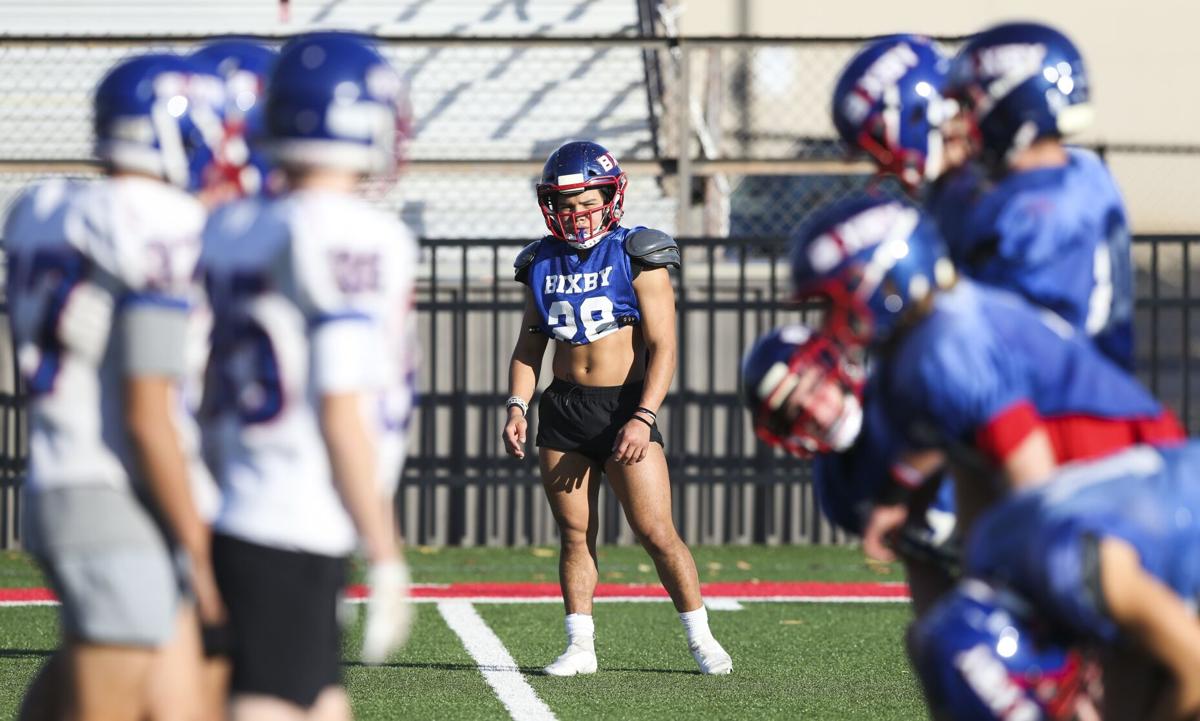 Zach Blankenship (28) runs a drill during practice on Tuesday at Bixby High School. 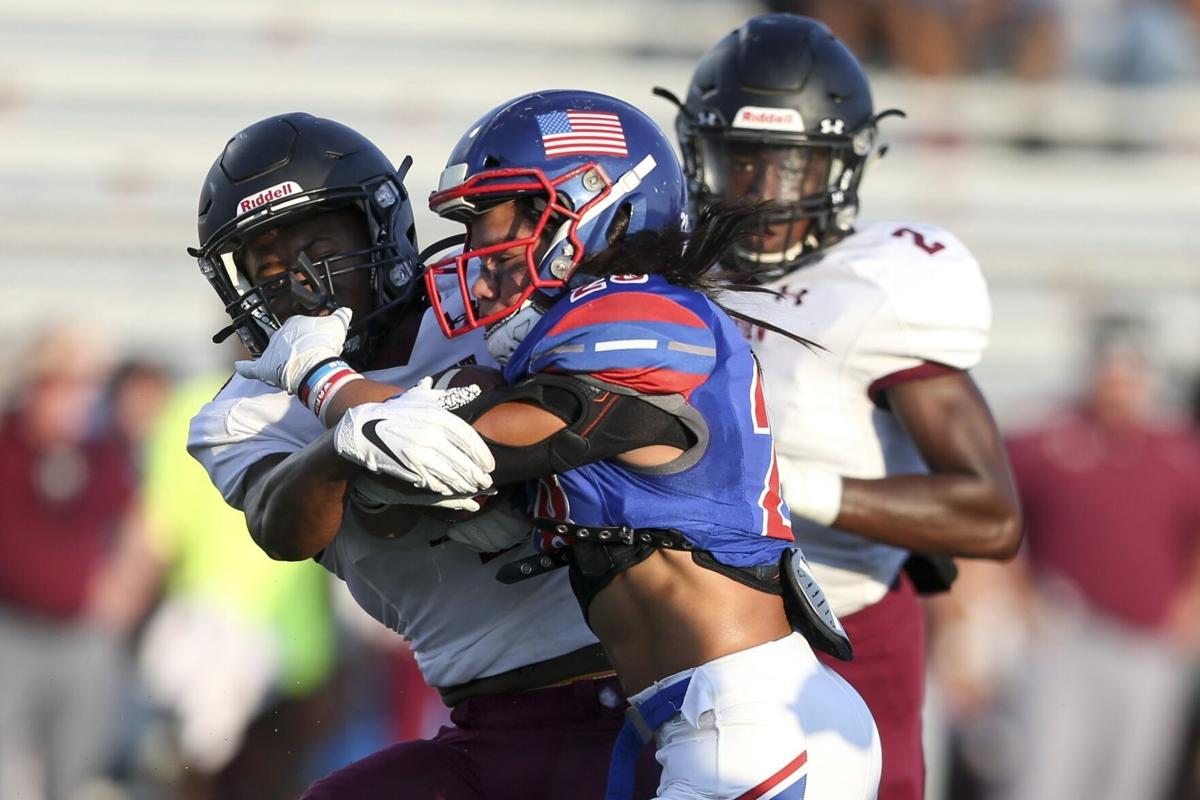 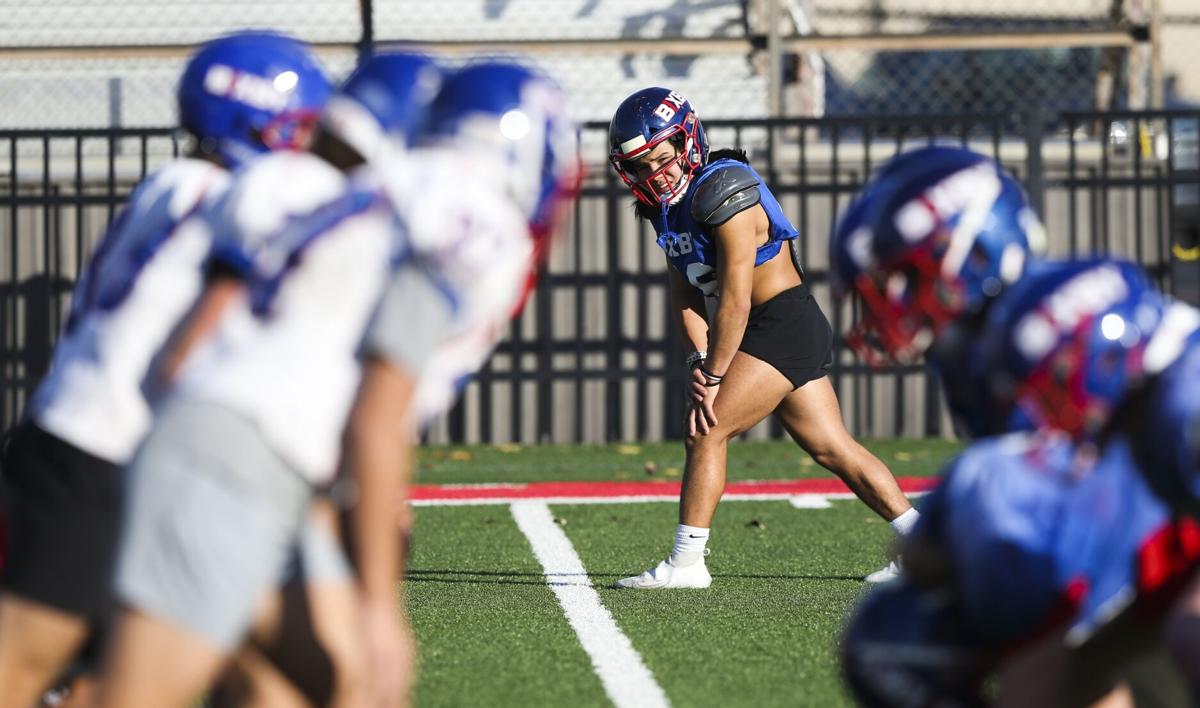 Zach Blankenship (center) lines up as a wideout during a Bixby practice Tuesday on the Spartans' Lee Snider Field.

Zach Blankenship can’t start at tailback for a team that has explosive Braylin Presley in its backfield, but he can do almost anything else.

Blankenship is the reliable utility man for Bixby’s No. 1 Spartans, who take a 47-game winning streak into Friday’s Class 6A Division II football semifinal against Stillwater in Langston University’s W.E. Anderson Stadium.

He carries the ball as Presley’s backup, spots in as an inside linebacker and is a special-teams standout. In last year’s 17-14 win over Choctaw in the 6AII championship game, he recovered a fumbled punt, setting up the Spartans’ first touchdown.

“I’ll do whatever they need me to do. That’s always been my mentality,” he said. “I’m ready in case somebody goes down. I try to be there.”

Because of Blankenship’s various duties, head coach Loren Montgomery said he’s on the field as frequently as almost any Spartan.

“It’s an asset for us to have a senior who is as talented and unselfish as he is, willing to do whatever it takes,” Montgomery said.

A 5-foot-3, 135-pounder, Blankenship doesn’t allow size to define him.

“It’s just a number,” he said. “People think because you’re shorter, you’re not as good, but I try to break that stereotype.”

Blankenship went undefeated to the Class 6A crown at 132 pounds last winter, was 43-1 as the 120-pound champ as a freshman and has lost only four matches over three seasons.

Except for an elbow injury that cut short his sophomore year in the regional tournament, he might be going for a fourth straight individual crown when he returns to the mat in December.

“Wrestlers have a different mentality,” Suffal said. “They’re gonna work and work and work, and then when you believe they have nothing left, they find another gear.”

Suffal’s words “describe Zach very well,” said Presley, who has accounted for 6,370 combined rushing and receiving yards over four seasons. “When you think you have (Blankenship) down, he’s gonna pull out something extra and rumble 50 or 60 yards or however many yards it is.”

Blankenship has ample opportunities to carry the ball for a team that is outscoring opponents by 50.8 points per game. But it isn’t all mop-up duty. He’s often on the field with the first unit when Presley is deployed as a wideout.

He has rushed for 382 yards and eight TDs this season and has 1,299 yards and 18 rushing TDs over three years, averaging 6.7 yards per carry. Last year, he had back-to-back 100-yard games against Booker T. Washington and Del City.

Blankenship, who wears a Barry Sanders jersey when warming up for wrestling matches, admits running the ball “is the most fun thing I do because I’m a running back at heart.”

“He does a lot of stuff behind the scenes that you never see unless you’re here in practice or in the weight room. He’s one of the guys people look up to. Sometimes, I have to work harder just to keep up with him,” Presley said.

“When I first got here (in the seventh) grade, he was the one who welcomed me and showed me around, just having that leadership aspect to him,” Presley said.

One more win for the Spartans would tie Wagoner’s state-record 48-game winning streak in 2014-17. But Blankenship said the ultimate goal is a fourth consecutive state title.

Friday’s winner will play Sand Springs or Edmond Deer Creek in the 6A Division II final at 7 p.m. Dec. 2 at the University of Central Oklahoma in Edmond.

“That’s super important because we’d be the first (Bixby senior) class to go four years in a row,” he said. “It’s a huge deal. and we all want it really bad.”

Zach Blankenship (28) runs a drill during practice on Tuesday at Bixby High School.

Zach Blankenship (center) lines up as a wideout during a Bixby practice Tuesday on the Spartans' Lee Snider Field.