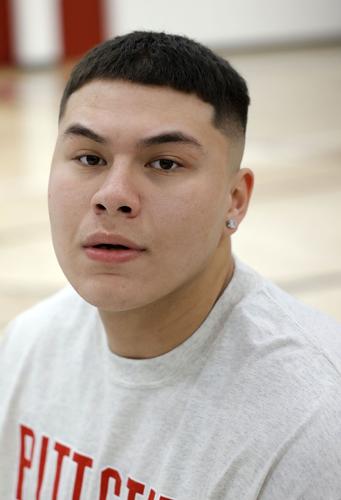 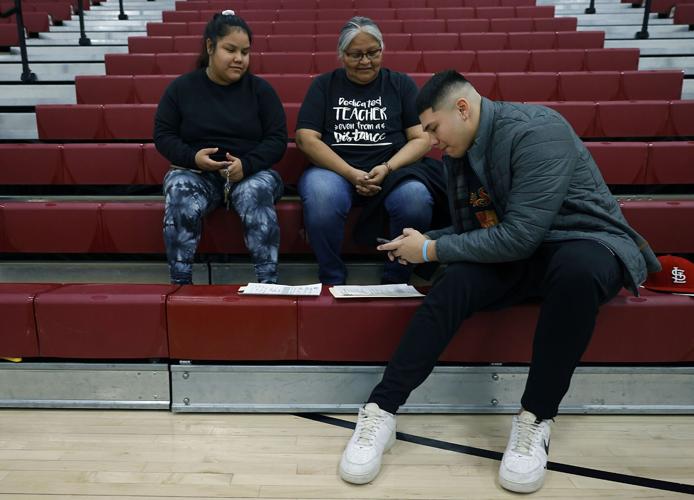 Jordan Nolin scans his letter of intent to send to Pittsburg State on Wednesday. Looking on are his aunt, Victoria Reyes (left) and his grandmother Susie Reyes.

Nolin, after the signing ceremony in Holland Hall's gym, reflected back on a rough moment he had as a freshman.

"It was our first warmup before the game and I tore my ankle up, I was crying, I was a big 6-2, crying," Nolin said. "I had never played football. Knowing I have come so far since my freshman year, having that experience, and then being a senior winning two state championships in a row, the toughness that came along with this team and the program, that's probably one of my favorite moments just looking back on it and realizing the journey that I've been on."

Nolin said Pitt State "felt like home" and that the Gorillas' winning tradition also was a factor for him choosing them over Texas State, Missouri State,  Southeast Missouri State and Central Missouri.

Muskogee has its highest ranking since 2019. Kiefer is in the rankings for the first time since 2016.

The Spartans pulled their starters before halftime on their way to a 80-0 homecoming win over their district opponents. It was Bixby’s 54th consecutive win.

Roller and Pawhuska's Todd Drummond trade places in the rankings.

Despite flying under the radar, Rejoice Christian wide receiver Solomon Morton has become the preferred target of choice for quarterback Chance Wilson, amassing 1,400 total yards and 19 touchdowns his junior year.

Whether in Sand Springs, Bartlesville or Bixby, people know him — and not for his football play.

The Lions had a Hollywood ending in a 20-14 win over Sunrise Christian.

OK Preps Extra podcast: Should there be a mercy-rule in the large classes?

The doctor who examined Dolphins QB Tua Tagovailoa has been fired

The doctor who examined Dolphins QB Tua Tagovailoa has been fired

Jordan Nolin scans his letter of intent to send to Pittsburg State on Wednesday. Looking on are his aunt, Victoria Reyes (left) and his grandmother Susie Reyes.