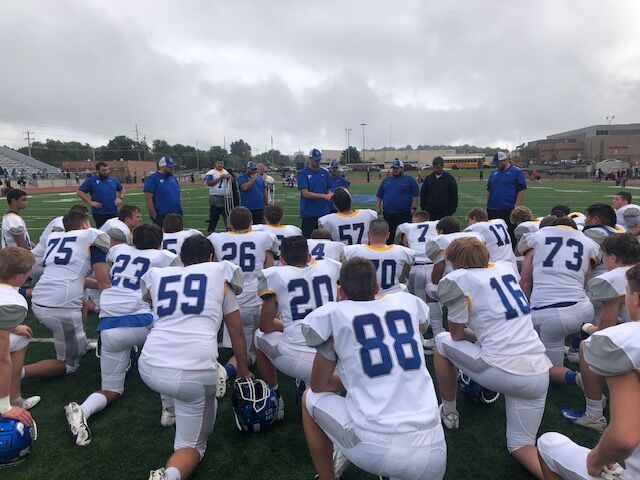 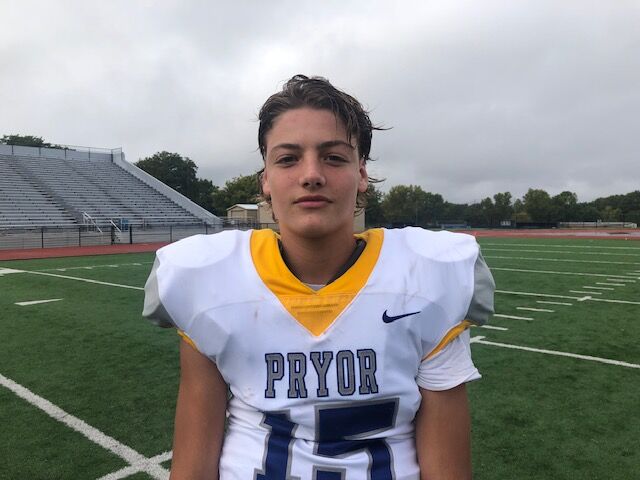 Pryor quarterback Brunk Gray after passing for two TDs in a 38-0 win over Memorial on Oct. 14, 2021, at LaFortune Stadium. BARRY LEWIS, TULSA WORLD

For Pryor quarterback Brunk Gray, the rare chance to play a weekday afternoon game was an "interesting" experience.

Gray awakened at the same time as usual for a Thursday, but due to it being fall break, instead of going to classes after breakfast he had a game to play instead.

"It still felt like a night game because it was overcast," Gray said. "But we played pretty good and got the job done."

Gray passed for two touchdowns and Leo Lovins rushed for three TDs -- all in the first half -- to lead Class 5A No. 10 Pryor past Memorial 38-0 on Thursday at LaFortune Stadium.

The game, played in a light rain before about 100 spectators, was in the afternoon as LaFortune's other home team, Edison, faced Durant in the nightcap.

"It was a different atmosphere," Pryor coach Kenny Davis said.

Whether it's been under the Friday night lights or on a weekday afternoon, Gray and the Tigers (6-1, 4-0 5A-4) have been impressive this season despite graduating All-State quarterback Ben Ward from last year's team.

"I feel like we've gotten a little better every week," Gray said. "I was just a little bit nervous (early in the season), but now I'm a little more settled in."

"Brunk's a real intelligent guy," Davis said. "He's tough as nails and has all the intangibles for that spot. He's done a great job taking of the ball and getting us into the plays we need to be in."

Gray showed his strong, accurate right arm in the first quarter with a 53-yard TD bomb to Bobby Belew. That came after Lovins opened the scoring on a 4-yard TD run. Lovins finished with 13 rushes for 107 yards.

In the second quarter, Gray rolled left and found Bret Elza for a 1-yard TD that made it 28-0. Tommaso Goldoni kicked a 27-yard field goal and Lovins added an 8-yard TD to give Pryor a 38-0 lead going into halftime. Lovins' third TD was set up by Jacob Couch's 18-yard interception return.

Pryor's reserves were in the game for most of the second half that was played with a running clock. There was no scoring after halftime as the second half included five turnovers. Memorial (0-7, 0-4) had a 45-yard field goal blocked as it was shut out for the third consecutive game.

"Our focus has been being better than the week before," Davis said. "And I think our kids have done a great job of doing that."

Lamar Jackson has most wins of any QB under 25

Lamar Jackson has most wins of any QB under 25

For the third time since 2018, a Hornet athlete is at the center of a nationally significant recruiting situation.

Victory Christian enters Class 2A rankings at No. 5 after routing Metro

Victory Christian is in the 2A rankings for the first time this season after a 62-7 win over two-time defending champion Metro Christian, which was No. 3, but falls out of the top 10.

Failure was no option for 1971 Booker T. Washington Hornets

B.T. Washington will recognize members of the 1971 team at halftime Thursday when the Hornets host Putnam West for a 7 p.m. kickoff in S.E. Williams Stadium.

Pryor quarterback Brunk Gray after passing for two TDs in a 38-0 win over Memorial on Oct. 14, 2021, at LaFortune Stadium. BARRY LEWIS, TULSA WORLD