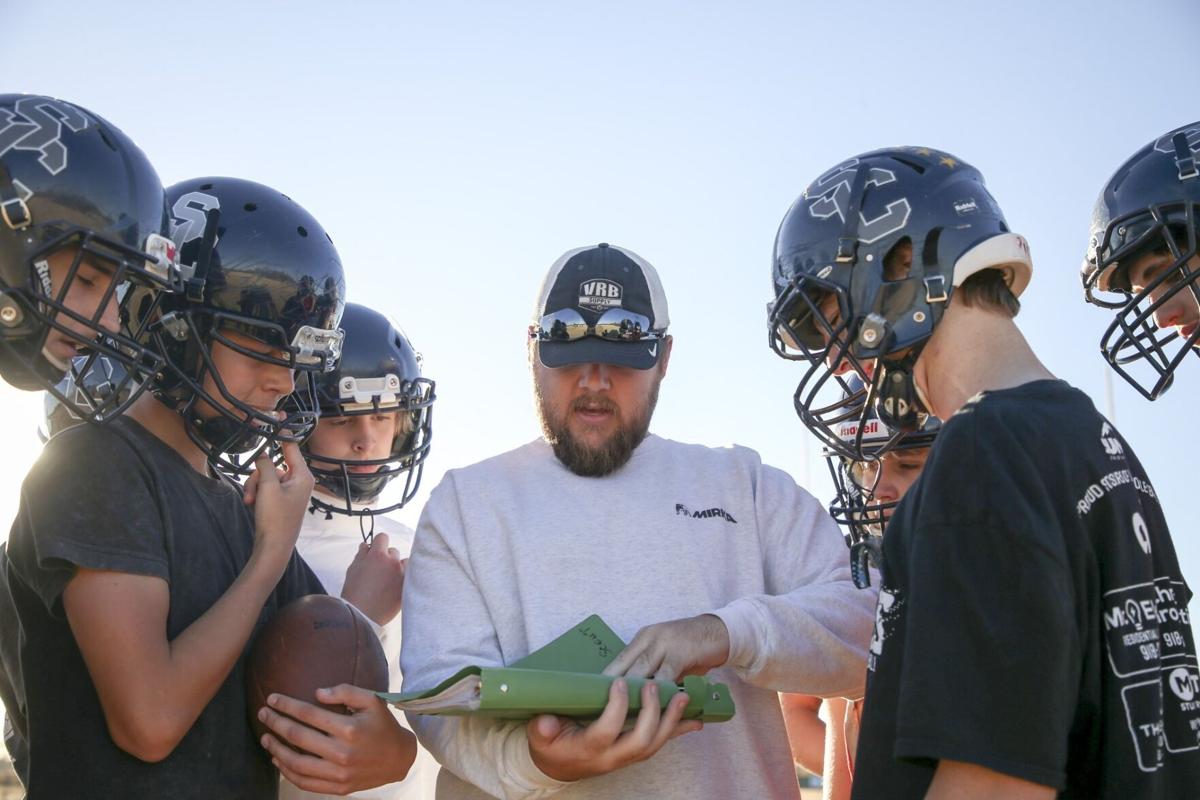 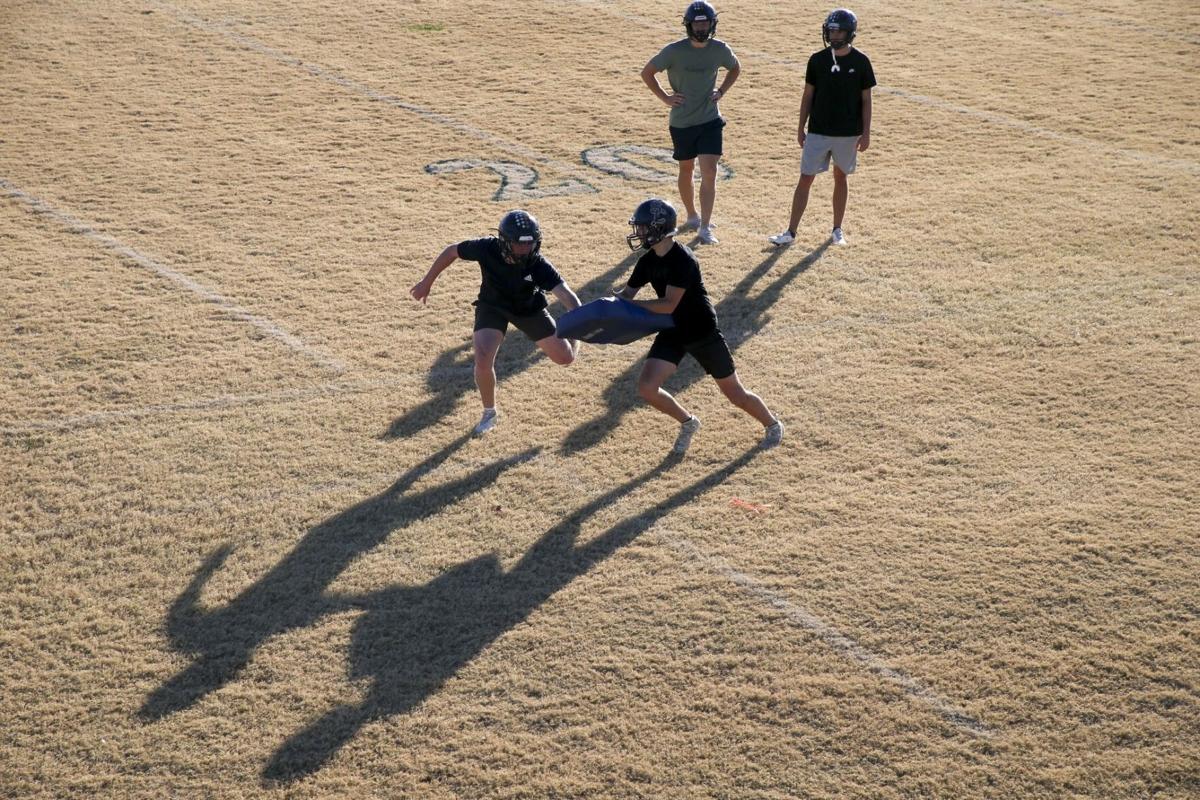 Summit Christian's Wyatt Austin fights off a block from a teammate during a defensive drill at their practice field on Tuesday. 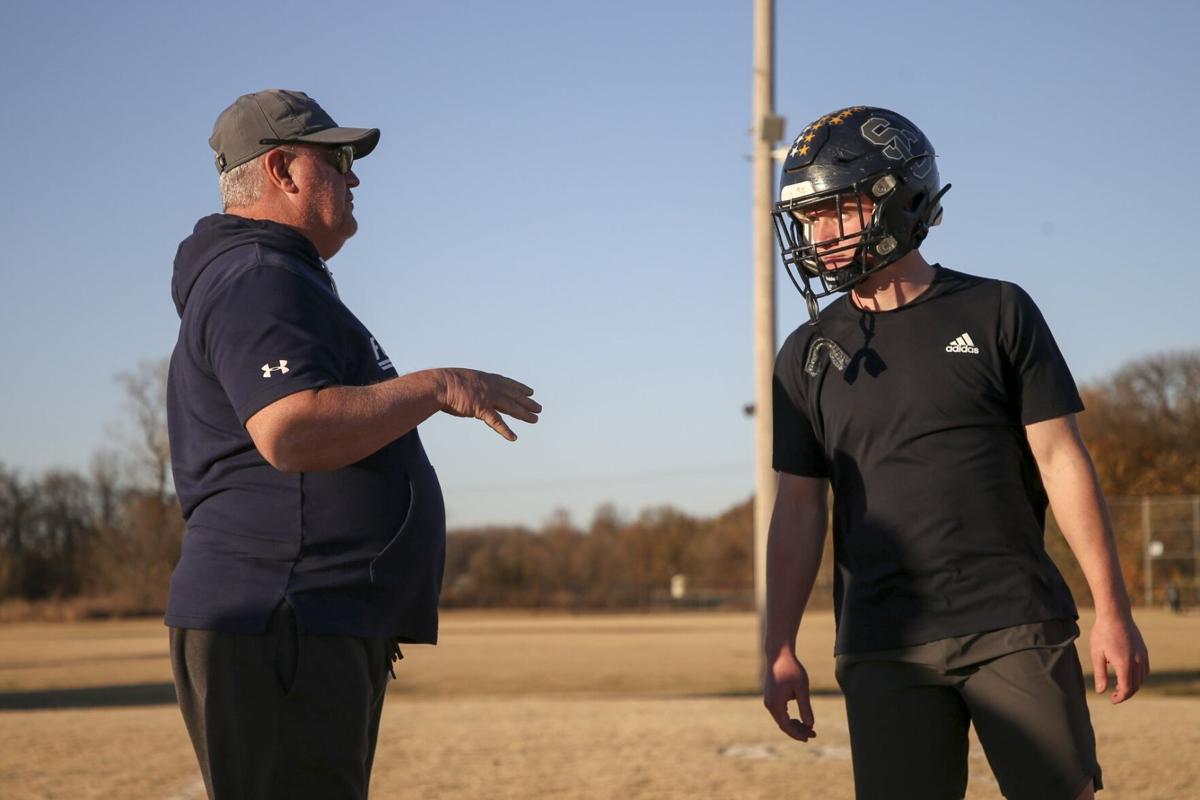 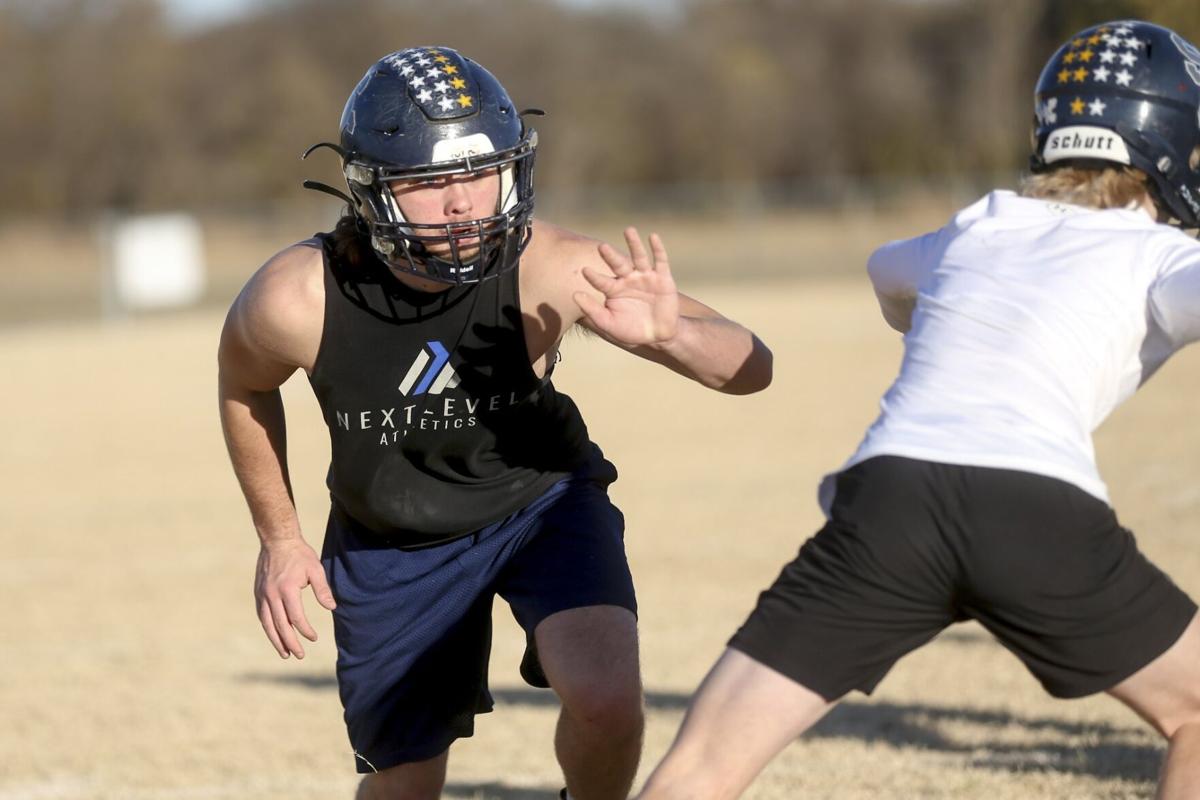 Summit Christian's Alex Schwier looks to make a play during a defensive team session during at their practice field on Tuesday.

This is a special time for 11 Summit Christian Academy senior football players — and a little bittersweet.

All know their next game could be their last.

“Most of us have been together at least a decade, friends for life,” receiver/defensive back Gabe Cox said. “It’s a little surreal knowing we’re not gonna walk on this field for another Friday night game.”

The Eagles made their final home game special last weekend by rallying past rival Regent Prep, 58-40, in the second round of the Class B (eight-man) playoffs.

Next up is Friday’s trip to the far northwestern corner of the state to face powerful, No. 1-ranked Laverne in the quarterfinals. This is Summit’s deepest playoff advance since becoming an Oklahoma Secondary School Activities Association member school in 2010.

“It’s a special week for these seniors,” eight-year head coach Todd Fulps said. “Most of them have been with me since I got here — Summit kids pretty much for life. They’re a great bunch from a close-knit group of families and it’s gonna be hard to see them go.”

Senior receiver/defensive back Nick Baker said he couldn’t remember defeating Regent Prep in any sport, “unless you count JV basketball. We did that one time.”

Regent defeated the Eagles in games shortened by the 45-point mercy rule in 2018 and 2019. The teams didn’t meet again in the past two regular seasons, but after going 8-4 last year, Summit’s players felt they had a good chance of seeing the Rams in this year’s postseason.

“We had that on our minds this whole season and we were ready,” Baker said.

Summit fell behind the Rams 26-12 last Friday, but a fourth-and-19 completion from Austin to Langebartels set up a score just before halftime, and the Eagles won the second half, 40-14.

“It took a few minutes to get all the pistons firing, but these guys were refusing to lose,” said lineman Alex Schwier, named District B-8 defensive player of the year. “This was gonna be the last time we played on this field and we didn’t want to go out on a loss.”

In a cruel twist of faith, this is likely to be Summit’s last playoff football for at least two years. The Broken Arrow school has grown too large to be classified in eight-man football for the 2022-23 seasons, but it lacks the resources to re-start at the 11-man level.

Fulps has only one junior (Langebartels) and two sophomores on his current roster.

“The ADM puts us five or six spots into 11-man football, but the numbers aren’t there,” he said. “Realistically, if we can scrape some kids out of the hallway, we’re gonna have 12 or 15 next year, and that may not even be enough to play eight-man football.”

School officials have obtained permission from the OSSAA to operate as an eight-man independent in 2022-23. The Eagles could be returned to the mix if at least one of the 80 eight-man schools committed for 2022-23 decides to opt out.

After practicing Thursday morning, Summit’s players spent the remainder of the holiday with their families, thankful they had at least one more game to play.

Here are the 11 football seniors who have led Summit Christian Academy into the playoff quarterfinals for the first time:

Innovative insulation unveiled for Team USA ahead of Winter Olympics

Bill Haisten: On a Florida beach, does Bill Blankenship decide to coach or retire?

While the Owasso coach occasionally is asked about the possibility of retirement, Bill Blankenship hadn’t been asked about it since he turned 65.

According to the AFCA, coaches who receive this award are recognized for their impact on their team, as well as the legacy they leave with the school and surrounding community.

Summit Christian's Wyatt Austin fights off a block from a teammate during a defensive drill at their practice field on Tuesday.

Summit Christian's Alex Schwier looks to make a play during a defensive team session during at their practice field on Tuesday.