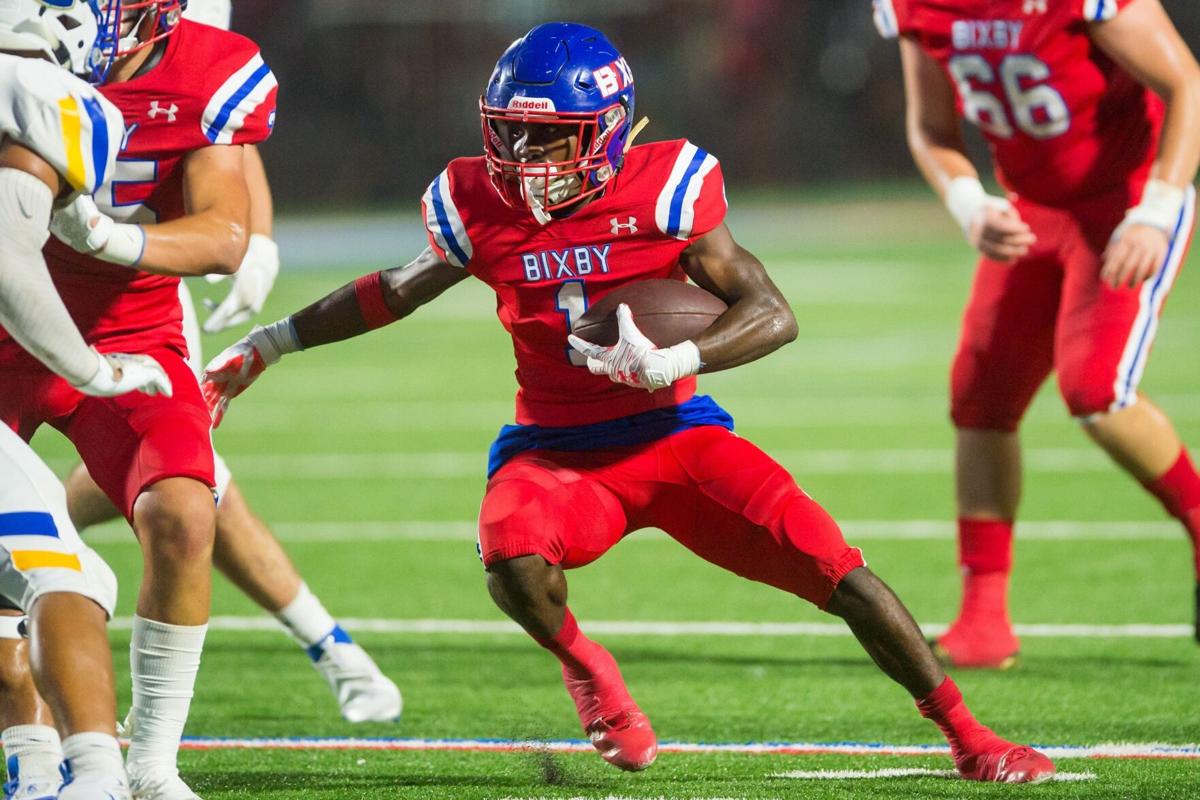 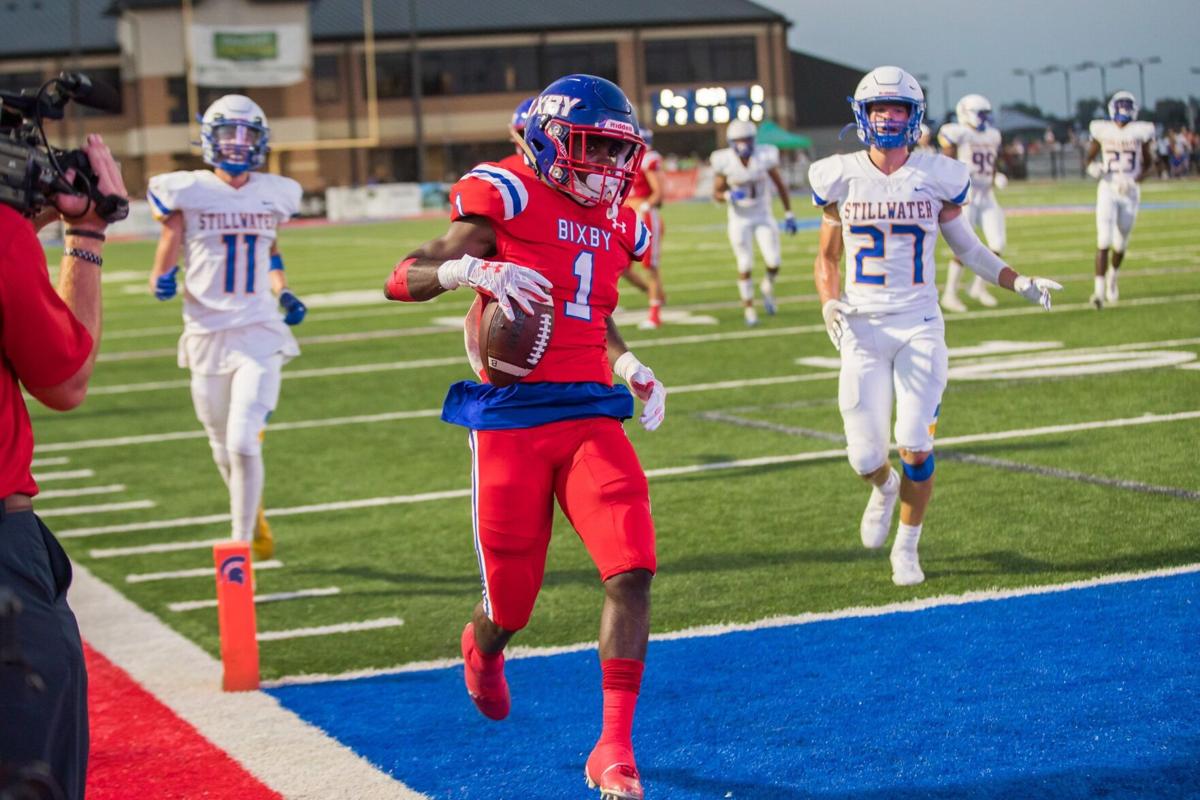 Bixby’s Braylin Presley crosses the goal line for a touchdown during the game against Stillwater on Sept. 17 in Bixby.

BIXBY — Before the glory of a Friday night, there is the grind of a Monday afternoon.

For the Bixby Spartans, ranked No. 1 in Class 6AII and in pursuit of what would be their fourth consecutive state title, the most recent Monday afternoon was a 98-degree cooker spent on Lee Snider Field.

Bixby coach Loren Montgomery estimates that for Spartan players, there are about 130 organized team activities in a typical calendar year. There is the offseason strength-and-conditioning program. There are spring practices. During the summer, there is toughness-testing weight-lifting along with 7-on-7 tournaments and team camps. During the preseason, a 98-degree afternoon is common. After the season begins, there are four practices each week.

Braylin Presley remembers being excited for varsity practices as a ninth-grader during the 2018 season. Now, as a senior running back and a four-year veteran of the Bixby varsity program, he is well beyond the 400 mark on his career total of organized team activities.

“Football is definitely a sport that you have to love,” Presley said after the Monday practice. “It’s really (like having) a job. You have to put all of your time and effort into everything. Otherwise, you’re not going to get much out of it.

“If I didn’t love football that much, I could come out here and play around ... and not get a lot done. But with me loving the game so much — and I’ve been doing it for so long — every day I come out here, I actually do enjoy doing what I do.”

On Friday, as Presley continues his quest to become the Spartans’ career leader in rushing yards, Bixby takes its 39-game win streak to Bartlesville.

Bixby isn’t winning championships only because of star players like Presley. Montgomery has two junior varsity teams, resulting in meaningful reps for everyone on the roster. After the Monday practice, some of the JV Spartans boarded a bus for Stillwater and a Monday night game. The other JV Spartans changed into game uniforms for a home clash with Union.

Montgomery says he has the same level of respect for his JV athletes and varsity special-teams role players that he has for the more well-known Spartans like Presley, Christian Burke, the Hasz twins, Zach Blankenship, Miles Hill and Jack Puckett.

“We always recognize a practice player of the week,” Montgomery said. “It might be a starter, but it might also be a kid who just comes out and practices well every day. And then on Friday night, we have three captains, but our fourth one we reserve for our practice-player captain.

“This week, it’s Aidan Hill, a senior running back and linebacker. He’s not a starter, (but) he starts on every special team. He comes out here and runs at scout-team tailback, and that’s kind of a thankless job — being the scout-team tailback with some of the guys we have on defense. I try to show (back-ups) how important their role is and respect that.”

Showing up and doing the work every day, all year long, and even when your Friday night role amounts to no more than staying in your lane during kickoff coverage: “I think that’s as much or more a character-builder than if you’re the Friday night star,” Montgomery said.

As so much football is played before a kid gets a driver’s license, the parental investment is essential. When their sons Brennan, Braylin and Braeden simultaneously were members of different youth-league teams, Tia and Arthur Presley attended hundreds of practices and games.

Incredibly, because Braeden was bigger than most of the other kids his age, he was the member of a first-grade team two years before he was an actual first-grader. He spent three seasons with that first-grade Bulldogs team. Braeden now is a Bixby eighth-grade wide receiver and running back.

“In those years, it was a juggling act every week,” Tia recalls. “Lots of communication was required. We had to make sure that each kid was at practice during the evenings, and then they all played games on Saturdays. It was overwhelming at times, but you had to make it work.”

The Presleys’ 2021 schedule: there are Braeden’s eighth-grade games on Thursday nights, Braylin’s varsity games on Friday nights and Brennan’s Oklahoma State games on Saturdays. After doing the Bartlesville round trip on Friday night, Tia and Arthur roll to Stillwater for Saturday’s 6 p.m. meeting of Kansas State and OSU.

Braylin Presley was the Tulsa World’s 2020 state player of the year. In April, he announced his commitment to Oklahoma State. When he shows up for a Bixby practice or strength training, Braylin has two levels of responsibility: to sustain himself as the No. 1 playmaker for a Spartan program attempting to score a fourth consecutive state title, and to become stronger and possibly even faster before he graduates to college football.

“It might not be fun every day, but I love the process,” Braylin said following the 98-degree Monday practice. “You can’t win on Friday if you don’t do the work on the other days. I love everything about it.”

Class A, B and C rankings

Bixby running back Braylin Presley, the Tulsa World’s 2020 state football player of the year, is giving Tulsa World sports columnist Bill Haisten an inside look at his senior season. This is the second installment in a monthly series that began in the High School Football Preview in August and will continue throughout the fall.

Owasso (3-0) and Union (2-1) are teams that have combined for three of the past five state titles in 6AI. The winner of this district opener t…

Bixby’s Braylin Presley crosses the goal line for a touchdown during the game against Stillwater on Sept. 17 in Bixby.