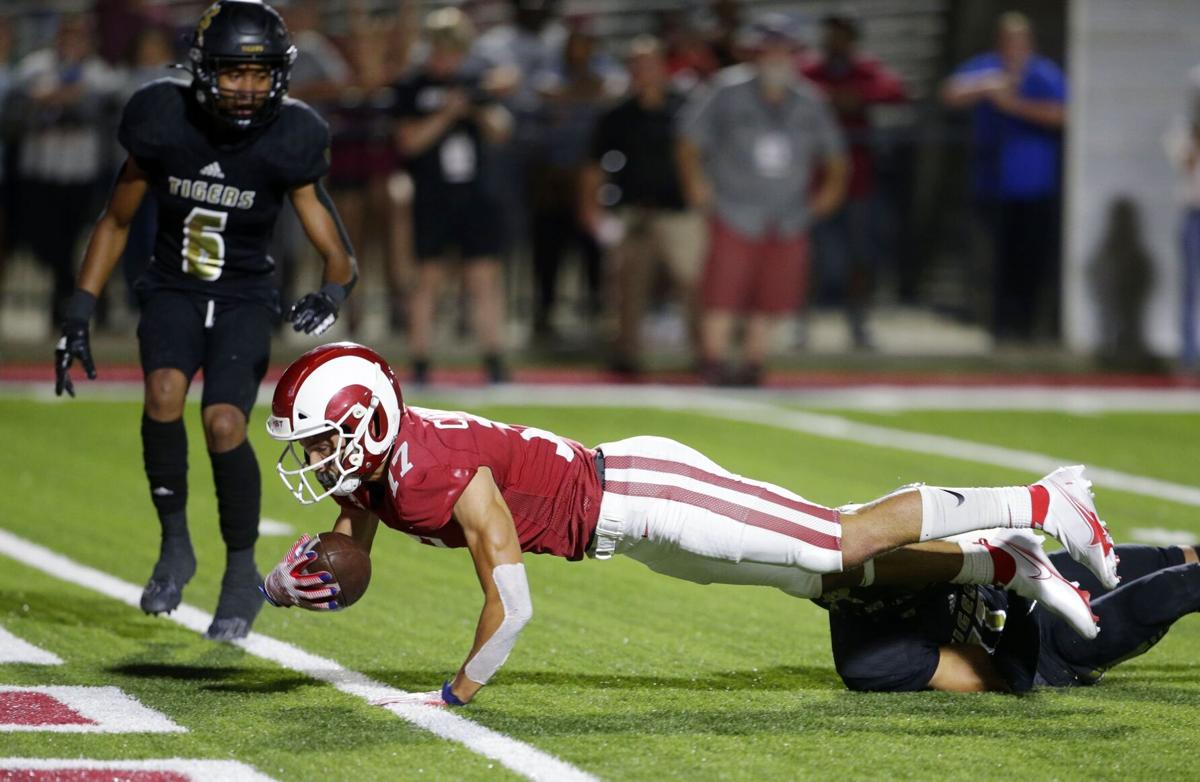 Owasso’s Hakelan Carney makes a diving touchdown under pressure from Taylor Griffin of Broken Arrow in Friday’s game at Owasso. 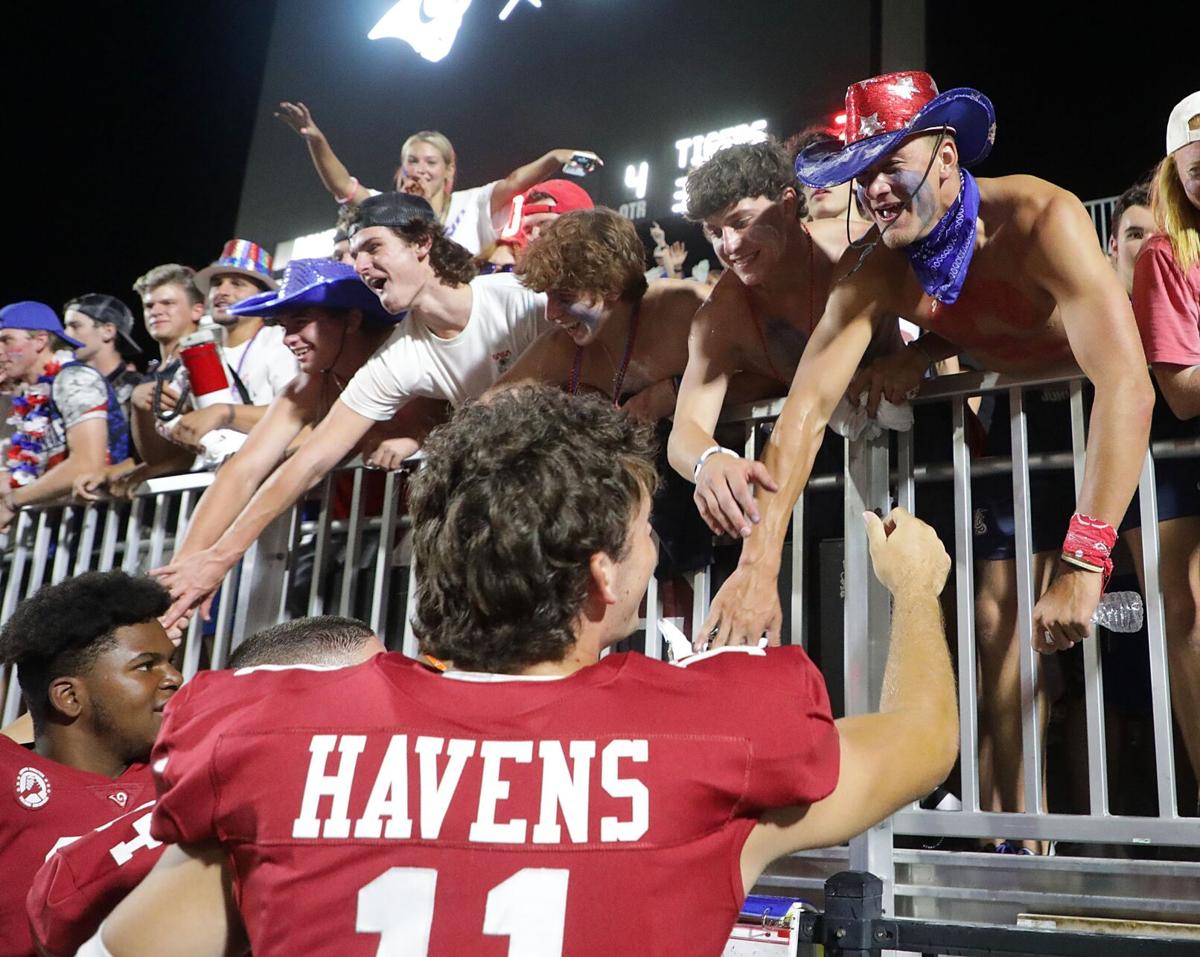 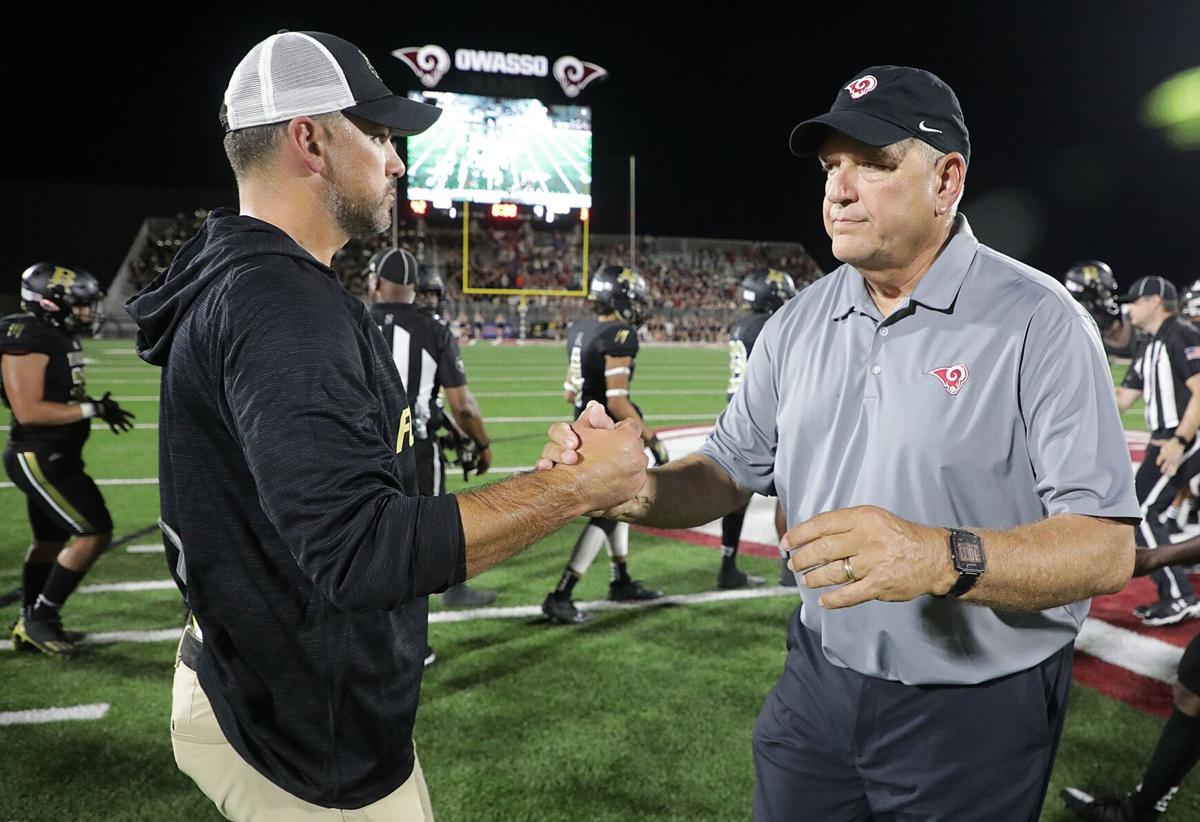 Then, the second-ranked Owasso Rams’ potent offense took the field. Junior quarterback Austin Havens threw two touchdown passes to Hakelan Carney and a third to Jaray Austin covering 91 yards — all in the first half — and had four in the game.

The Rams backed up their offense by putting constant pressure on Broken Arrow quarterback Griffin Stieber, who completed just 4-of-20 passes after going 31-for-40 in his first two games.

It added up to a third consecutive Patriot Bowl win for the Rams over the Tigers, 42-3 on Friday night before a standing-room-only crowd of about 12,000 in Owasso Stadium.

“He said he loved me and I told him the same thing,” Bill Blankenship said of his son after notching his 265th win over 27 high school coaching seasons.

“You have to live this life to understand what it’s like to win and lose, and you have a lot of empathy (for the other guy) when you win,” he said.

His biggest play was probably the 91-yard pass to Jaray on the Rams’ second possession, already leading 7-0 on a 25-yard pass over the middle to a wide open Carney to cap the first drive.

Stieber’s 46-yard punt pinned the Rams deep. But on second-and-12 from the Rams’ 9, Austin beat the defense again over the middle, caught Havens around the 50 and outran Marion Horn, the Tigers’ only defender with a chance to catch him.

Horn lunged and got Austin around the ankles at the 20, but couldn’t hold on and it was 14-0. Havens teamed with Carney again and it was 21-0.

“Very explosive,” Bill Blankenship said of the offense which produced a straight-up 500 yards on 54 plays from scrimmage. “We have a lot of guys who can make big plays and spread it around. We’ve got a chance to be pretty good.”

Owasso, a state semifinalist last year, improved to 3-0 and may or may not be ranked atop Class 6A Division I on Monday. There’s a spot open because No. 3 Jenks knocked off No. 1 Union 22-0 Friday night.

The Rams have next week off before opening 6AI-2 competition at Union on Sept. 24.

Broken Arrow, which lost to Union last week, fell to 1-2 and also has next week off. The Tigers open District 6AI-1 competition at Westmoore on Sept. 23 before hosting Jenks on Oct. 1.

Six Rams caught passes, led by Austin with two catches for 101 yards, Cole Adams with six for 74 yards and Carney with five for 63.

Even second-team and wildcat quarterback Mason Willingham got into the act, scoring on a 6-yard run and throwing a 31-yard TD pass to Anthony Hills.

About the only thing the Rams did wrong was commit too many penalties — 10 for 105 yards. They might have had a shutout, but a pair of personal fouls late in the second quarter when BA seemed content to run out the clock set up Hunter Martens’ 38-yard field goal.

View from the Sidelines: Owasso takes on Broken Arrow

Owasso’s Hakelan Carney makes a diving touchdown under pressure from Taylor Griffin of Broken Arrow in Friday’s game at Owasso.