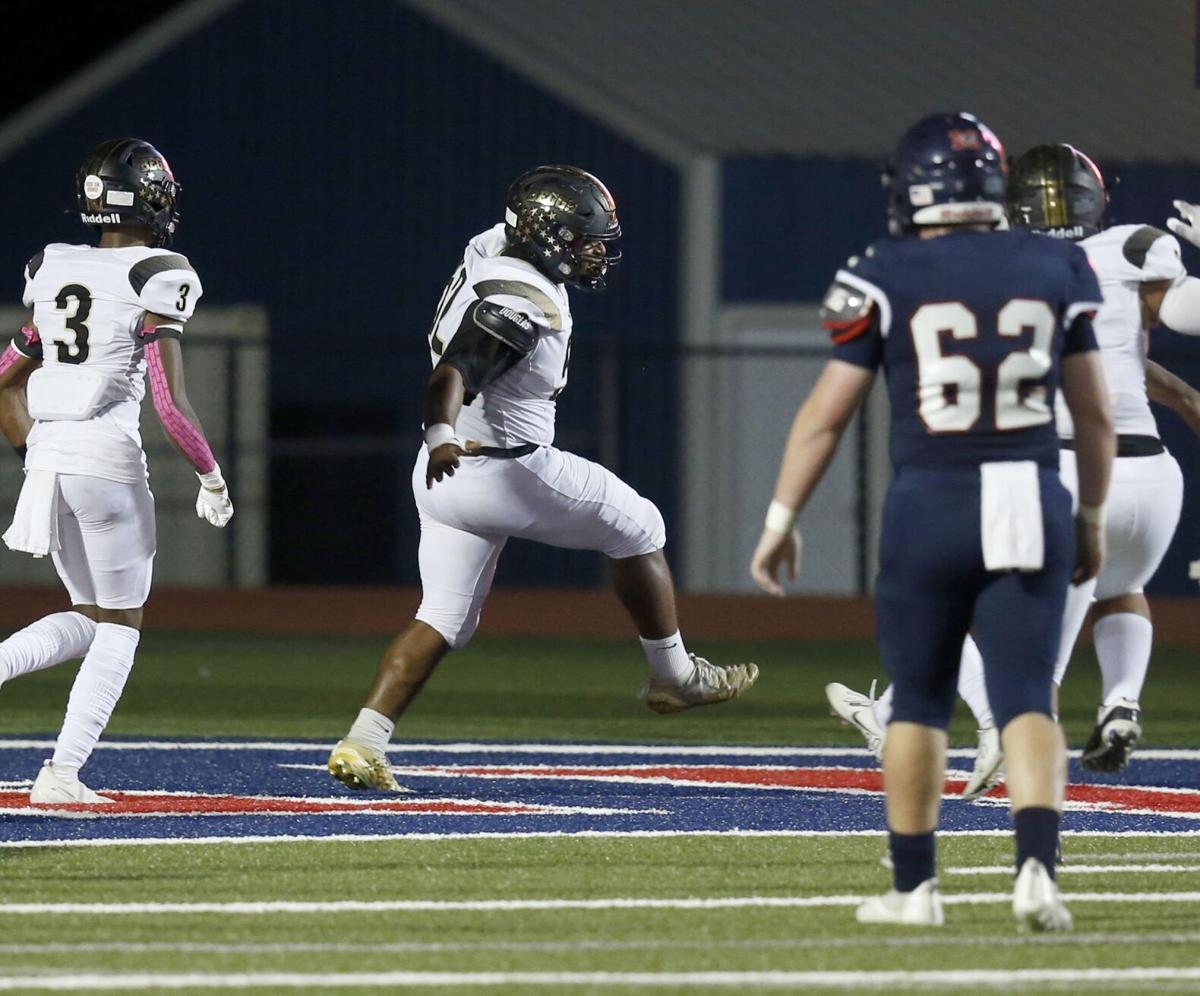 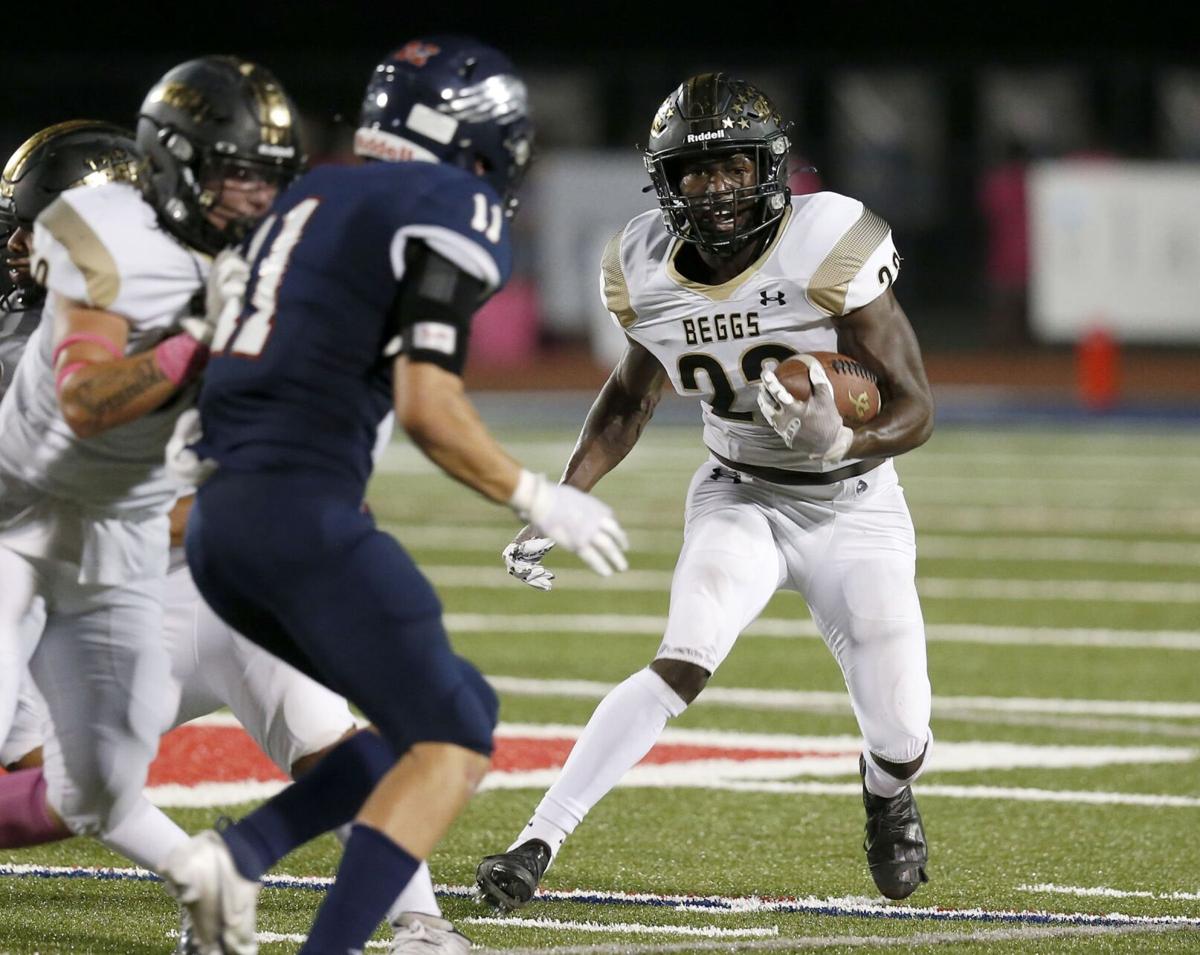 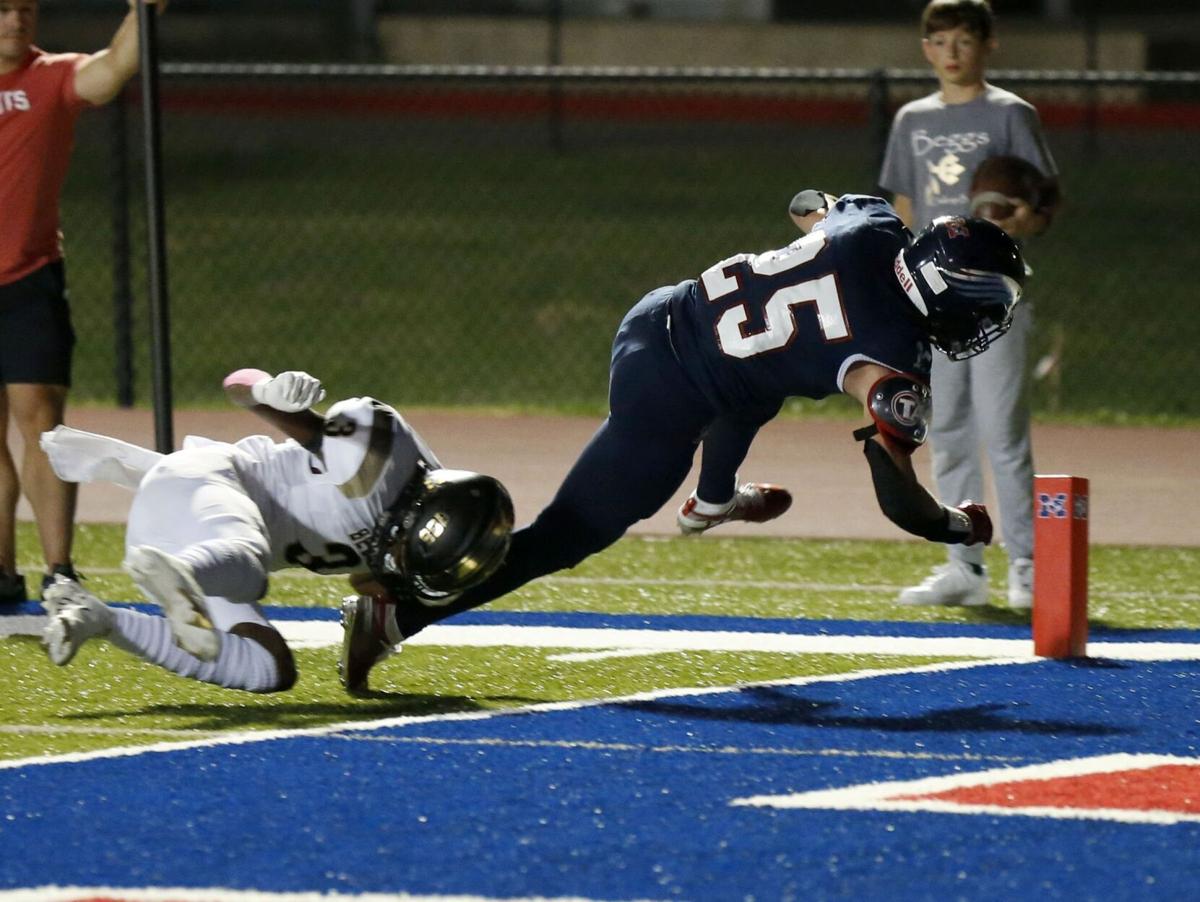 Metro’s Tagg Campbell scores a touchdown after breaking a tackle against Beggs on Friday night. 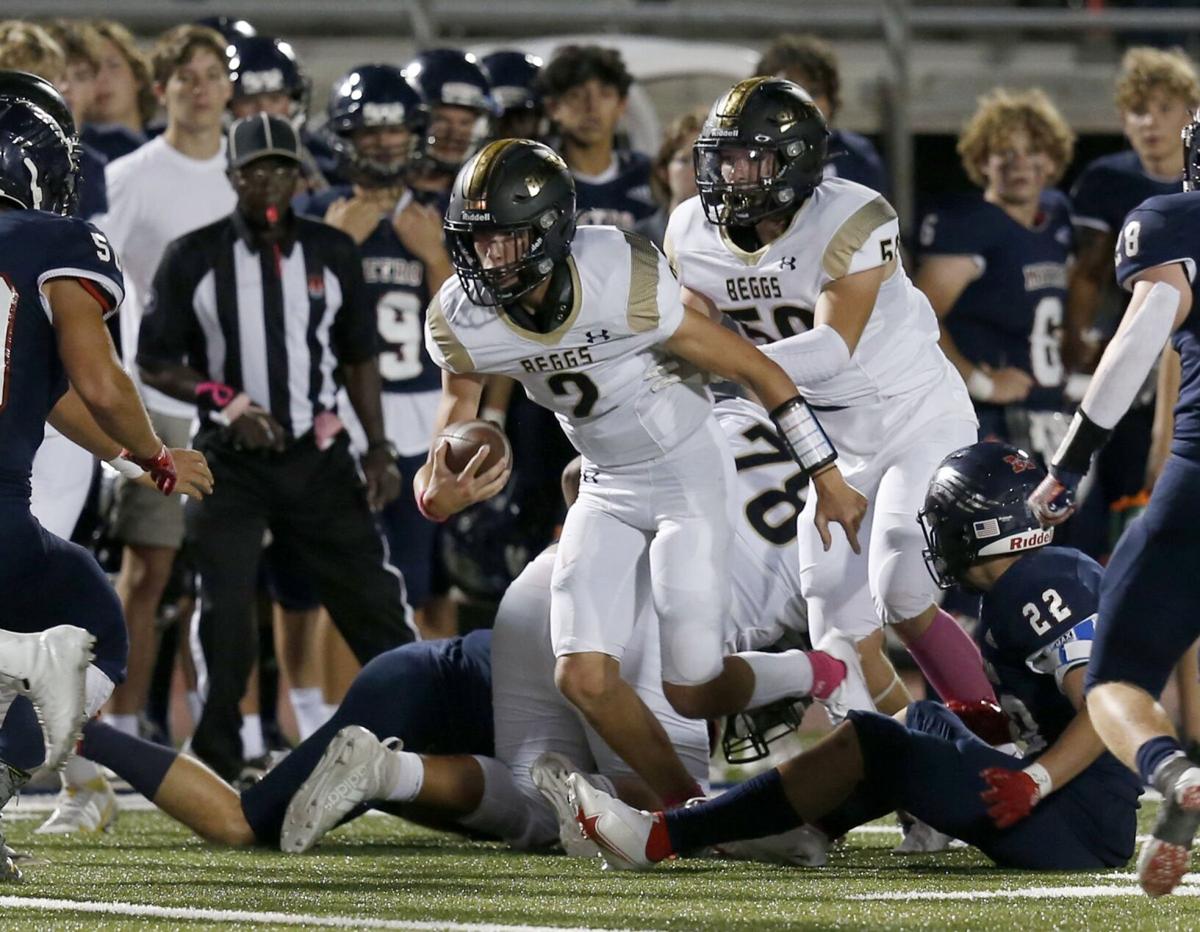 Beggs lineman Chance Jordan was greeted by his head coach, David Tenison, a few moments after Friday’s Class 2A showdown at Metro Christian.

“I told you, you’re a warrior,” Tenison said and then hugged Jordan.

Jordan scored on a Pick-6 late in the first half and then had two key defensive plays on Metro’s final possession to help lead the third-ranked Golden Demons to a 24-22 win over No. 1 Metro Christian at Patriot Stadium.

“It feels good to come out here and beat ‘em,” Jordan said. “I think we have a chance to win this gold ball.”

Jordan’s TD came with 56 seconds before halftime. With Beggs leading 8-7, on second-and-14 from the Metro 3, Patriots quarterback Kirk Francis was pressured in the end zone and Jordan intercepted the inside screen at the 5. Beggs quarterback Ayden Hamilton added his second 2-point run for a 16-7 lead.

“I didn’t know the ball was going to come to me,” Jordan said.

A huge turnover came with just less than five minutes left as Beggs was trying to hold on to a 16-15 lead. Just when it appeared Metro running back Tagg Campbell was about to cross the goal line for the go-ahead TD, Lucas Roberson stripped the ball and Hamilton recovered in the end zone.

Two plays later, Red Martel raced 81 yards down the left sideline for a touchdown. Running back CJ Brown took the snap under center, and ran into the end zone for what turned out to be the decisive 2-point conversion with 3:46 left as Beggs led 24-15.

After Roberson recovered the ensuing onside kick, Beggs went 4-and-out as Metro gained the ball at midfield. Jordan stuffed the first play, costing Metro some time although the Patriots eventually picked up a first down at the Beggs 40. However, Jordan sacked Francis on the next series of downs, setting up a 4th-and-17 with 32 seconds left. Francis, on the Patriots’ final snap, launched a long pass that fell incomplete in the end zone to end the suspense.

Beggs failed to capitalize on an early takeaway at the Metro 37, but opened the scoring later in the first period on Brown’s 51-yard dash down the left sideline, accompanied by Kyron Grayson’s screen block. Hamilton added the 2-point conversion run for an 8-0 lead.

Metro had a better ending on its next trip into the red zone. Francis was 7-of-8 on a 10-play, 87-yard drive that was capped by Campbell’s 3-yard TD run around left end off a direct snap. Brayden Haveman kicked the extra point that cut Beggs’ advantage to 8-7 with 14 seconds left in the first quarter.

The Golden Demons missed a scoring chance midway through the second quarter when Metro’s Mario Darrington picked off a pass in the end zone.

In the third quarter, Francis connected with Seth McCoy, who bounced off tacklers and scored on a 17-yard reception. Dax Dancer added the 2-point run that made it 16-15 and set up a suspenseful fourth quarter that included two big stops by the Beggs defense with big plays from Jordan in the final two minutes.

“I didn’t want to lose, I came here to win the game,” Jordan said. “I wasn’t about to let them go get another touchdown.”

View from the sidelines: Metro Christian Academy vs. Beggs

Metro’s Tagg Campbell scores a touchdown after breaking a tackle against Beggs on Friday night.