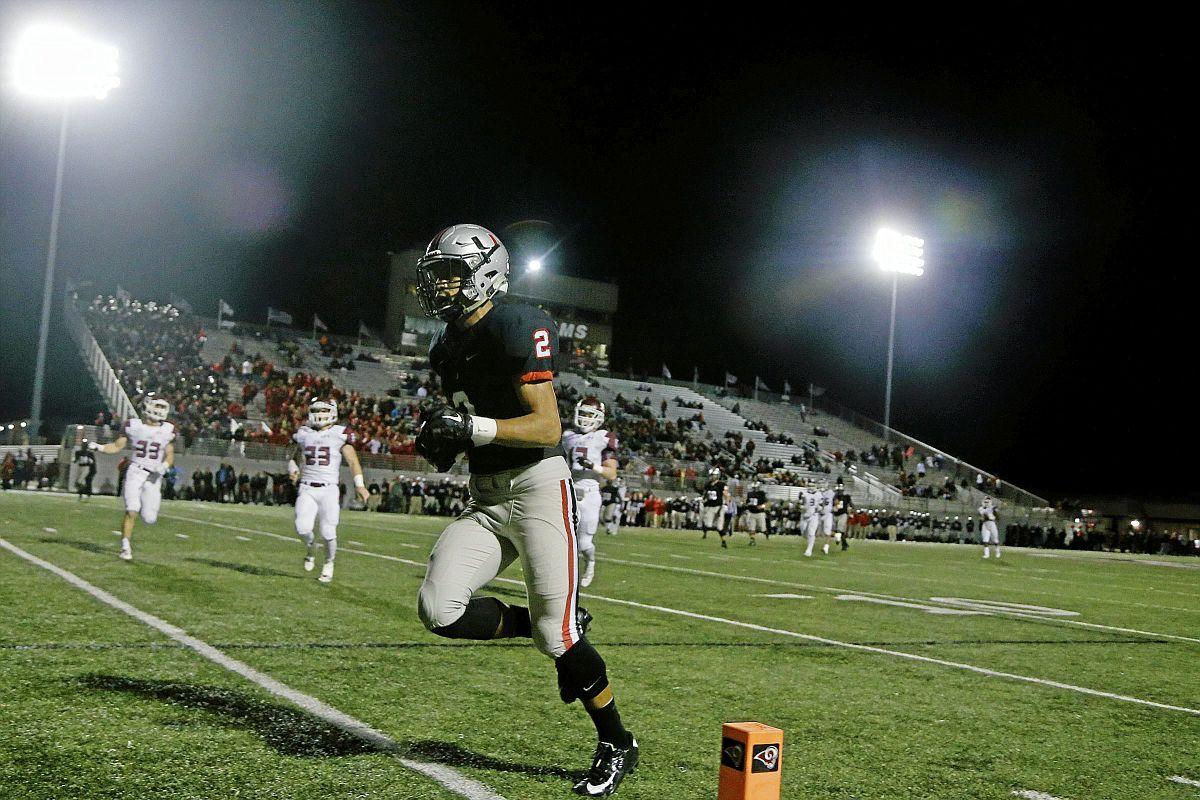 Union’s Kameron McQueen scores a touchdown against Jenks during a game on Nov. 20, 2015. McQueen just completed his college football career at Kansas and is now an aspiring filmmaker whose short project on the Tulsa Race Massacre is scheduled to debut on social media May 30. 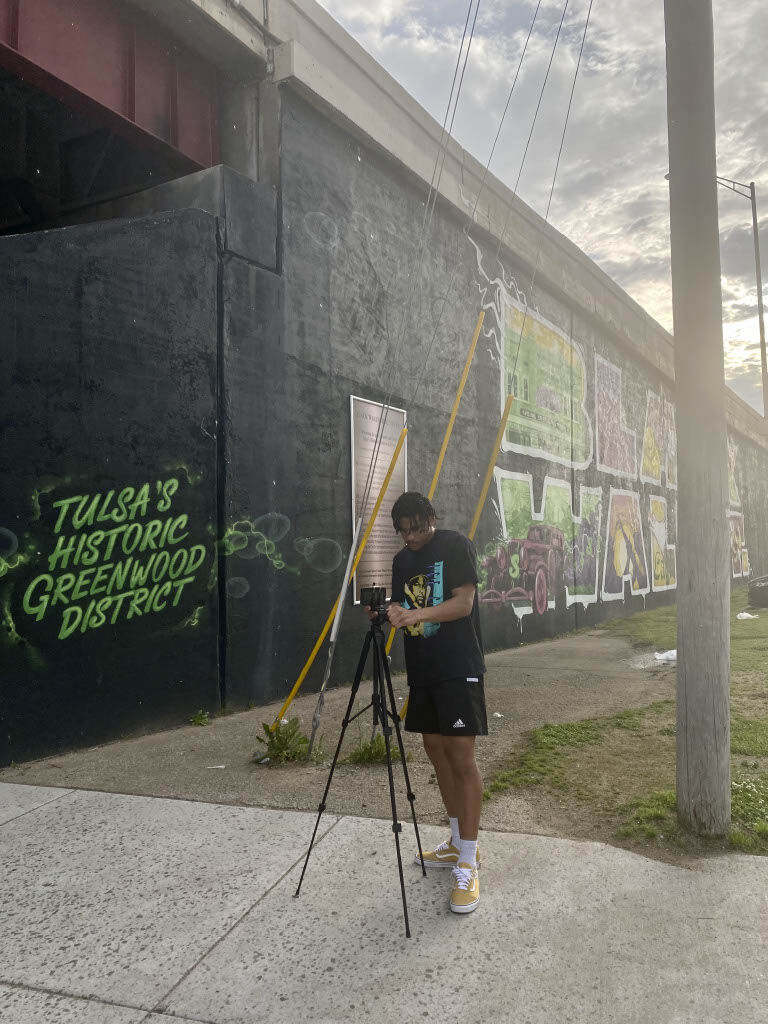 Kameron McQueen, pictured here on Tulsa’s Greenwood in front the Black Wall Street Mural, is a former Union High School and University of Kansas football player who is now an aspiring filmmaker. His short film “The Hope of a Nation” about the Tulsa Race Massacre debuts on YouTube and social media Sunday.

Our young have contributed the strongest initiative and perspective to our racial reckoning over the past year. In many cases our young athletes have.

Kameron McQueen, born and raised in Tulsa, having played football on Tre Brown’s and Shamari Brooks’ Union teams and at Tyler Lockett’s youth camps before becoming an Academic All-Big 12 Conference contributor at Kansas, must be recognized for his initiative.

The 23-year-old McQueen must be recognized because he cares enough about his city, about understanding and justice within his city, to apply his passion to it.

“I’m an aspiring filmmaker,” McQueen says. “I can remember going to see ‘The Dark Knight’ in 2008. A connection was made. Sparks were in the air. I became a student of film right then, fell in love with the craft and fell in love with storytelling.”

McQueen’s short film he plans to debut on YouTube and social media channels Sunday features the Tulsa Race Massacre. It is called “The Hope of a Nation,” a play on “The Birth of a Nation,” D.W. Griffith’s 1915 film that might be a cinematic landmark but also portrays Black men despicably and the Ku Klux Klan heroically.

McQueen’s presentation includes footage of Greenwood he captured with his iPhone 12 Pro Max, a widescreen lens and a stabilizer, plus narration about what happened to Black Wall Street 100 years ago.

“The thing I want people to take away is to be educated on things that are unknown or things that are forgotten, really,” he says. “Too see both the beauty of Tulsa and all the things that African Americans and minorities have had to endure. I feel like the Race Massacre that happened in 1921 is reflective of the times right now.

“I don’t think the centennial could have come at any better time with what we’re going through from a political and social standpoint.”

McQueen’s social activism over incidents involving George Floyd and Jacob Blake, as well as the general racial tenor in our country, led him to participate in marches and rallies over the past year.

He joined the KU football team’s unity council in releasing a statement last October. It included the lines: “We are sick and tired of the systematic racism and inequality towards minorities that continues in the country. ENOUGH IS ENOUGH!”

“The Hope of a Nation” hits closer to home, drawing attention to the Race Massacre so that some might deepen their reconciliation over Tulsa’s least humane, most hateful episode and others might learn about it.

“I was in sixth grade and we were doing a research essay on oil. We were in the computer lab and I literally stumbled upon it,” McQueen says. “It was a freak accident on Google search. I was still too young to fully grasp the severity, but I knew it was serious.

“It puzzled me why we weren’t taught this. We were taught everything about Oklahoma history from the Trail of Tears, which was terrible, to the Land Run. We’re being taught all that, but I hadn’t heard anything about Greenwood or the Tulsa Race Riot, which is what it was called then.”

McQueen had the benefit of informative parents who could answer any of his questions. He could visit Greenwood himself growing up. But what about those less connected? How to reach them?

As McQueen aged and matured and his mind opened to racial and social justice in Tulsa and abroad, his heart opened to film.

“I remember as a freshman at Kansas, the coach asked us, ‘Who wants to play in the NFL?’ and I was the only one who didn’t raise my hand,” he says. “Well, I rose my hand out of peer pressure three seconds later. That’s kind of when I knew...

“I mean, I love football. In Oklahoma it’s the biggest thing. Friday night lights. Everybody dreams of getting under those lights. I was fortunate enough to do that at Union. I met incredible people through football, made of a lot of great connections.

“But sitting in a theater or creating my own project, that’s always where I felt the most peace.”

Now film helps this young man to the most influence.

Here’s “The Hope of a Nation.” A Kam Fam Films production.

“If my city doesn’t know my name or my city doesn’t feel my impact, I feel like I haven’t done my job,” McQueen says. “Tulsa always has been in my heart and always will be. I want to give back as much as I can and educate people on things that are important. People shouldn’t ignore what happened 100 years ago, they should be educated on it.”

Daniels also has been a head football coach at Memorial and Verdigris.

Union’s Kameron McQueen scores a touchdown against Jenks during a game on Nov. 20, 2015. McQueen just completed his college football career at Kansas and is now an aspiring filmmaker whose short project on the Tulsa Race Massacre is scheduled to debut on social media May 30.

Kameron McQueen, pictured here on Tulsa’s Greenwood in front the Black Wall Street Mural, is a former Union High School and University of Kansas football player who is now an aspiring filmmaker. His short film “The Hope of a Nation” about the Tulsa Race Massacre debuts on YouTube and social media Sunday.