Today, the junior running back is a threat to go a long way every time he touches the ball.

Grove head coach Ron Culwell describes the 6-foot, 175-pound Crawford as “a great athlete, absolutely driven to succeed, and one of the best kids I’ve ever known.”

Crawford averages 11.6 yards per carry in his third varsity season and is nearing 3,000 career yards. He’s one of the main reasons the Class 4A No. 6 Ridgerunners are 4-0 for the first time in 13 years as they host Catoosa for homecoming Friday in Delaware County.

The Sept. 17 date of the Pryor game was significant because it marked the 11th anniversary of Crawford’s arrival from the West African nation of Ghana, where he spent most of his first six years.

Though rich in gold production, Ghana ranks among the poorest nations on earth. When Crawford was 3, he was sold into slavery by birth parents unable to provide for him, and worked for two years in the fishing trade on Ghana’s Lake Volta.

Crawford remembers sleeping on the floors of thatched huts, waking exhausted and being forced to work from dawn to dusk. Often, he used a coffee can to bail water from the bottom of fishing canoes. At other times, he was put over the side and told to clear away underwater brush that might get tangled with the fishing nets.

“I didn’t know anything outside of long work days and working out on the lake. I just thought that was how it was,” he remembers.

Life changed dramatically in late 2009. Emmanuel was rescued and placed in an orphanage run by the United States-based Touch-A-Life Foundation, which has rescued more than 100 Ghanaian children from slavery.

A few months later, he was adopted by Grove dentists Stan and Audrey Crawford. They had five children of their own, but wanted to adopt another.

They learned about Emmanuel through their own connections with the Touch-A-Life Foundation. Co-founders Randy and Pam Cope had been their patients while living in Neosho, Missouri, and have since relocated to Dallas.

Today, Crawford carries a 3.7 grade-point average, has fun playing on Grand Lake, is considered a friend to all who know him and has an insatiable thirst for all competitive sports — especially for the one played with the oblong pigskin.

“Football is his jam,” Audrey Crawford said. “He gets so focused. When it’s game time, his mind is totally right.”

Crawford wants to help lead the Ridgerunners to their first appearance in a state final since 2006, the most recent of the school’s three runner-up finishes.

“Our atmosphere as a football team has really changed. (In the past), we didn’t have teams that played together,” he said. “This year, we have talent all over the field and we’ve been working really hard in our new weight room. Our motto is, ‘We’re due.’”

From Ghana to Grove, Crawford said his story is one of hope and redemption.

“God used it to make me who I am. He brought me through physical slavery, and he can do the same for anyone struggling with other kinds of slavery,” he said. “With so much fear in the world and people kind of losing hope altogether, they need to hear that as long as God sits on his throne, we always have hope.”

Crawford expresses admiration for late evangelist Billy Graham, and says he wouldn’t rule out being a minister someday. He writes sermons that he posts on Snapchat and receives feedback “from kids asking me to pray for them and help them stay close to God.”

Crawford’s parents see the hand of providence winding throughout the saga. If they hadn’t known the Copes personally, they never would have known about Emmanuel in the first place. Today, they can’t imagine life without him.

Normally, the Copes wouldn’t recommend children for adoption outside of Ghana, preferring them to grow up and be educated there. But Audrey Crawford said they somehow knew “that Emmanuel was destined for something else.”

Crawford was the youngest and sickliest of the children found on a scouting mission by Randy Cope and Ghanaian negotiator George Achibra one day in 2009.

After securing his release, they gave him two suckers. He said it was the first time he had ever tasted anything sweet “and the first time I had experienced goodness. (The candy) was probably the key thing in making me understand that I could trust these people who were rescuing me.”

He now loves Snickers, Tootsie Pops and all things sweet.

He and Audrey Crawford bonded from the beginning. When she flew to Ghana to visit him in the orphanage in January 2010, “he curled up into my lap and fell asleep, and there was just perfect peace,” she said. “I knew in my heart that he was the one.”

What followed were months of paperwork and eight transcontinental flights between Stan and Audrey before they brought Emmanuel home on Sept. 17, 2010. That was on a Friday.

Bursting with energy and already introduced to soccer at the orphanage — the sport is huge in Ghana — he joined a family friend’s youth soccer team the following Monday.

Athletically, Crawford has never slowed down. He’s also played basketball and baseball, and in his first track season last spring, he barely missed qualifying for the Class 5A state meet in the 100 meters, finishing fifth in the regional meet. He was also fourth in preliminary qualifying for the 200 meters, but had a false start in the final and was disqualified.

“He already had a great work ethic and he didn’t want to sit idle,” Audrey Crawford said. “Sports were just a great natural outlet for letting him expend his strength and energy.”

“He wants to play Division I football, and he’ll do anything it takes,” Culwell said. “He’s one of the hardest workers we have and he’s still learning. In the seventh grade, he wanted to reverse his field and try to outrun everybody. Now he’s learning to be more physical. When the play is over, he knows to lower his head and get those last few yards.”

Last summer, Crawford attended camps at Oklahoma State, Tulsa, Arkansas and Florida International University. OSU has maintained closest contact, and he and his parents were in Stillwater last weekend for the Cowboys’ win over Kansas State.

Others in Grove would like to see him play at nearby Arkansas, coached by former Ridgerunner multi-sport standout Sam Pittman.

“I’ve really enjoyed all the camps and got to know some of the coaching staffs,” Crawford said. “I’m just trusting the process. I’m going to keep doing me and see where that gets me.”

Class A, B and C rankings

While defending champion Bixby remains atop 6AII, undefeated Booker T. Washington rose to the top 3 this week as it has its best start to the …

A new No. 1 in 6AI: Week 3 high school football rankings

After Week 2 rivalry games, there's a new No. 1 in Class 6AI. #okpreps

A new No. 1 in Class A and 5A; Wagoner drops a spot in 4A; plus this week's Backyard Bowl and Patriot Bowl will include 6AI's top four teams. …

Throughout the high school football season, the Tulsa World is giving readers a behind-the-scenes view at some of the area’s top players.

This District 6A-2 clash of the Norman North Timberwolves and Owasso Rams was played on Friday, Oct. 1 — giving Blankenship a shot to pad his … 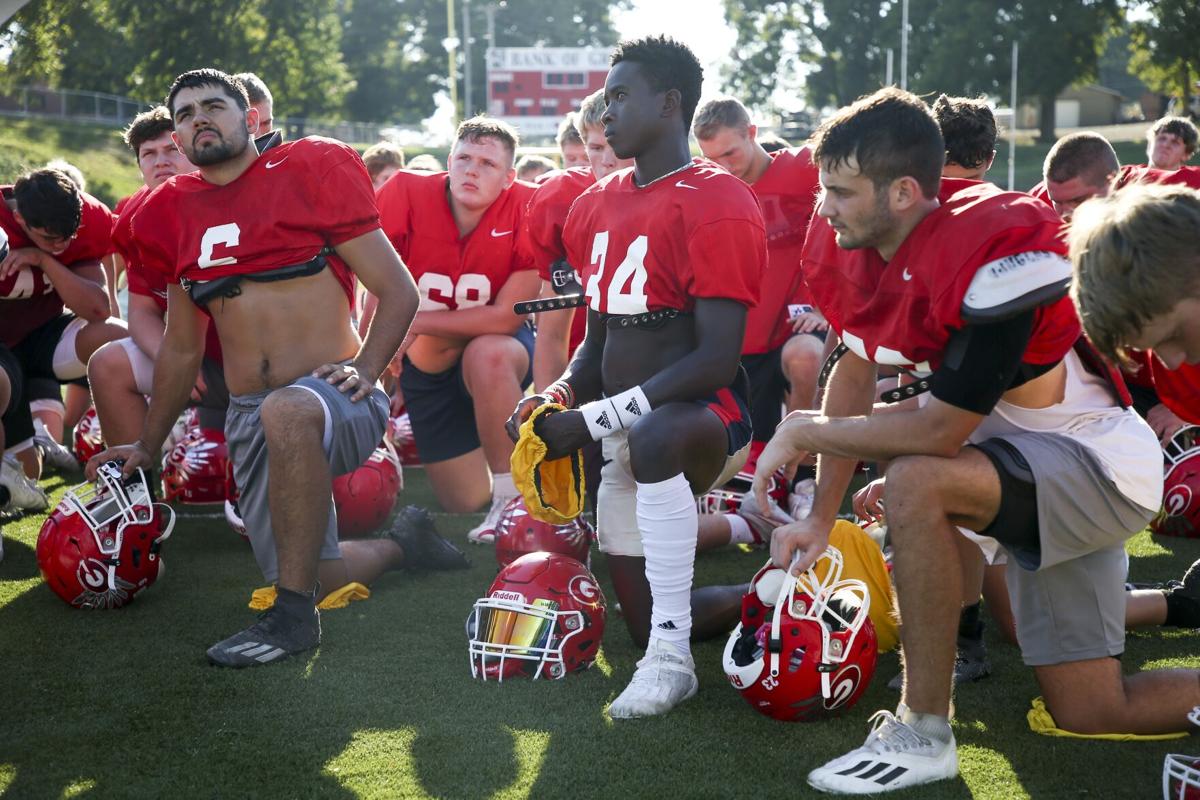 Emmanuel Crawford listens to his coach after practice at Grove High School on Tuesday. 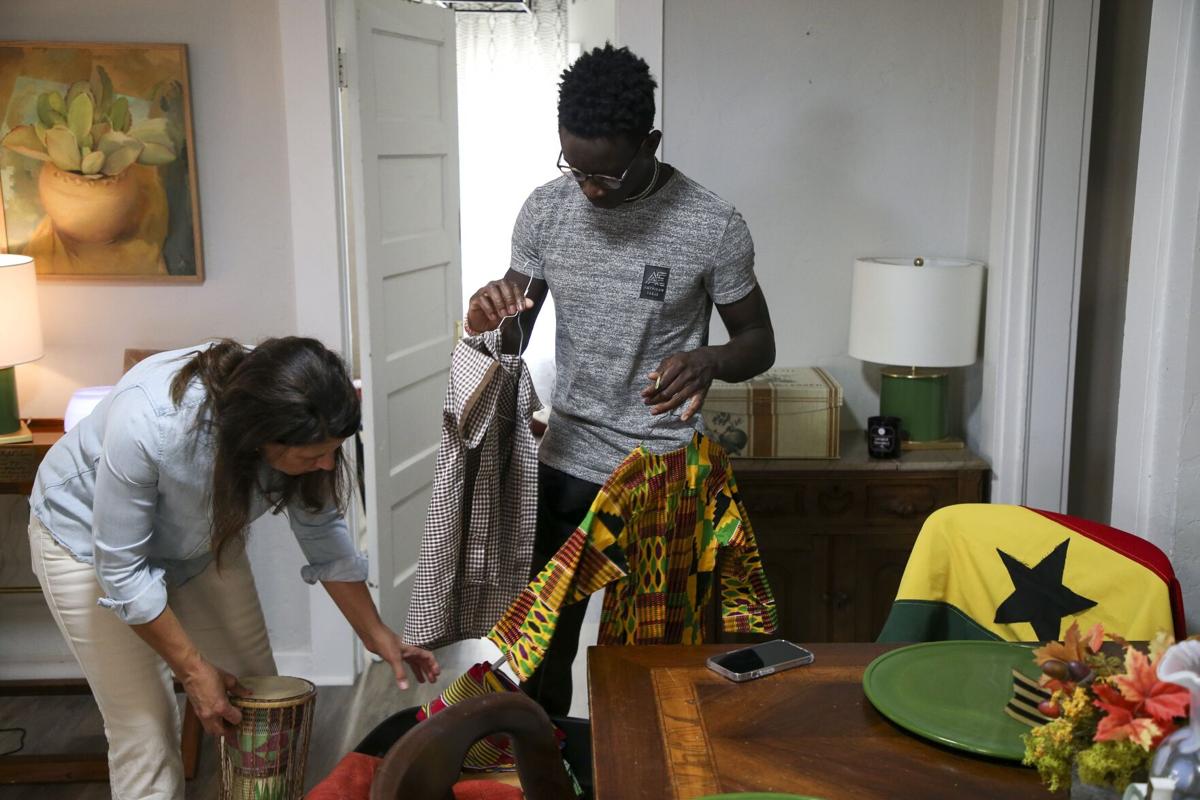 Audrey and Emmanuel Crawford look at an old school uniform and clothing from Emmanuel's life in Ghana at their home in Grove. 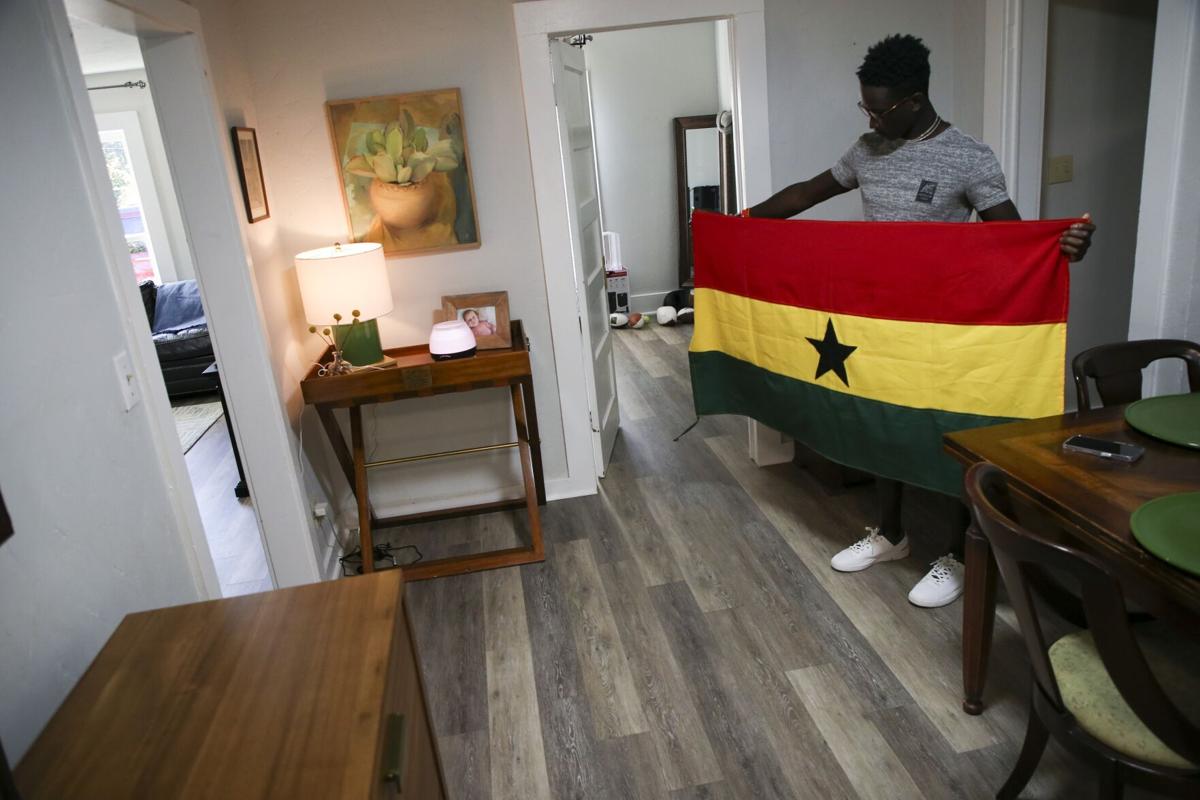 Emmanuel Crawford holds up the flag of Ghana while in his home at Grove. 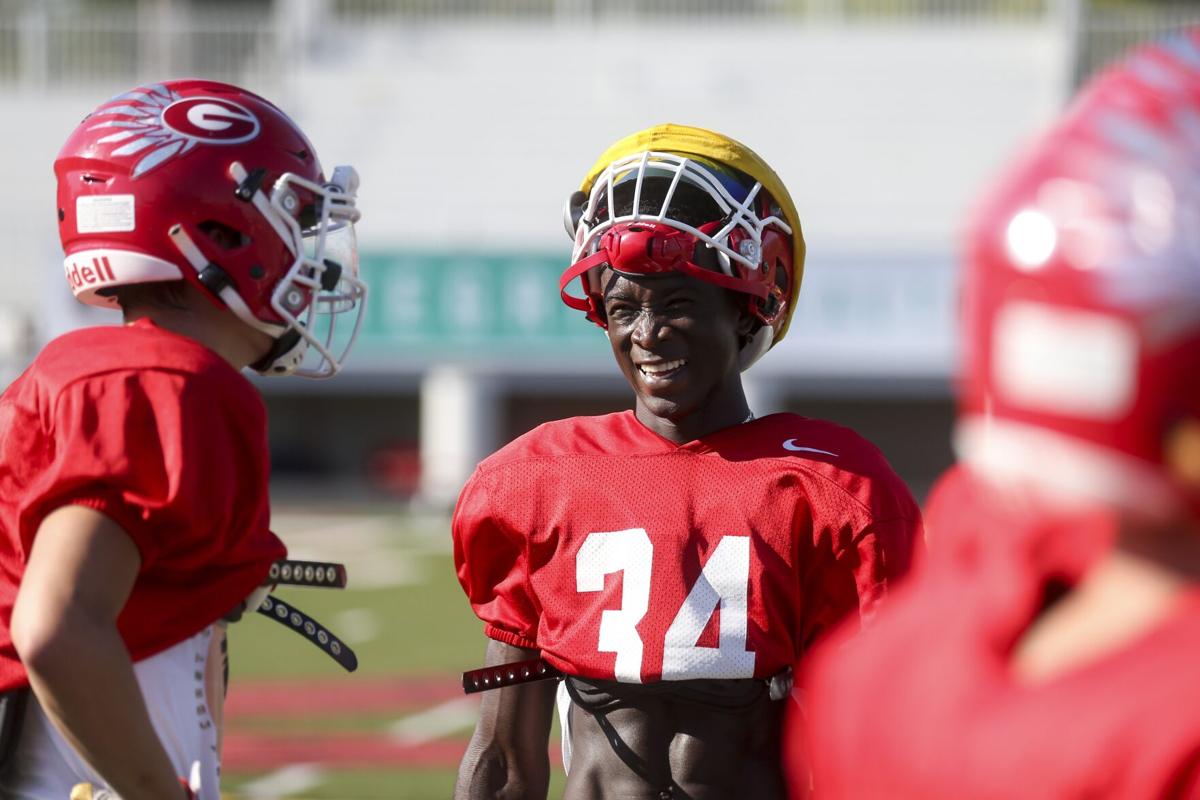 Emmanuel Crawford laughs while talking to a teammate at practice at Grove High School on Tuesday. 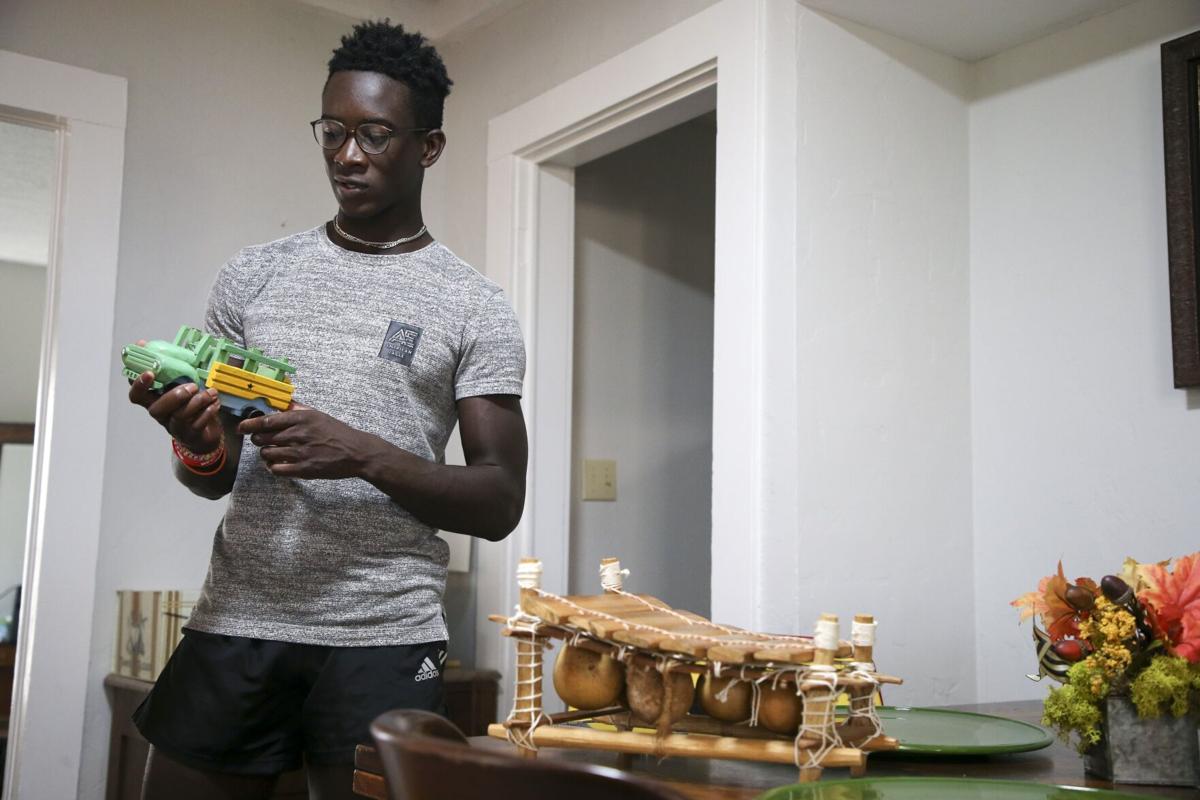 Emmanuel Crawford holds a toy truck from his childhood in Ghana at his home in Grove. 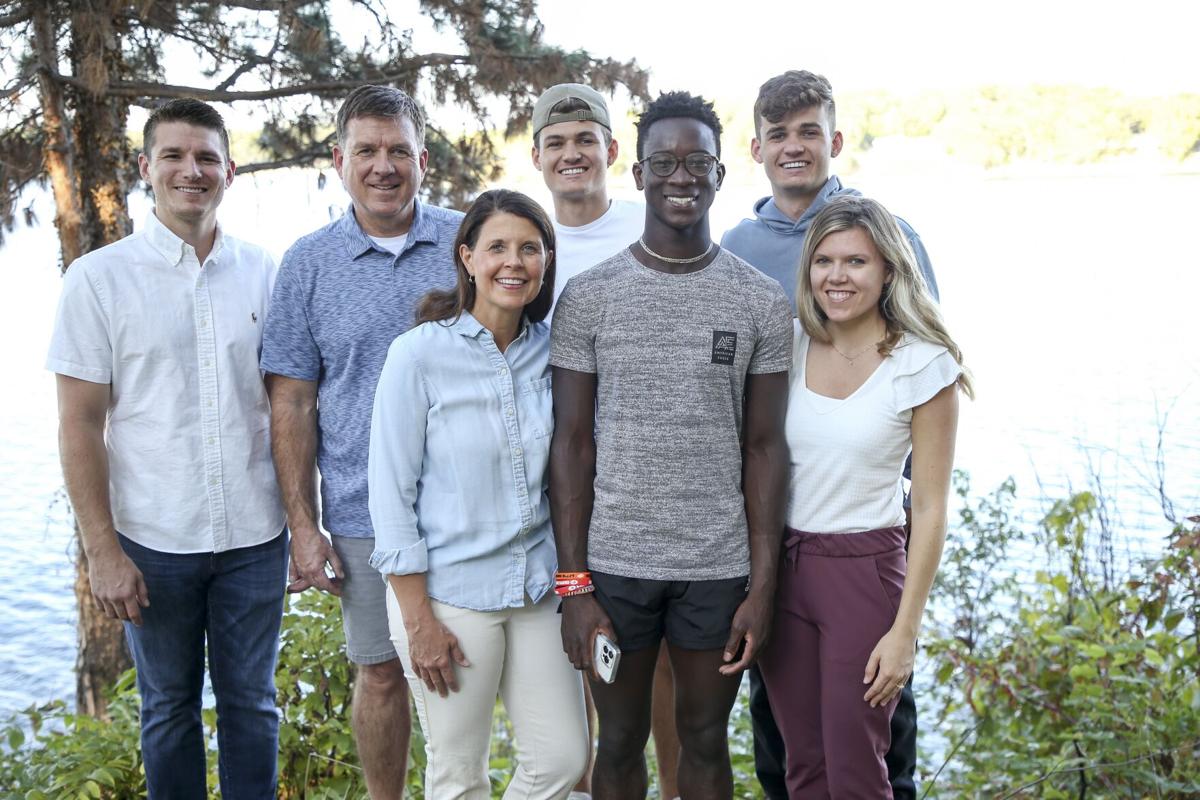