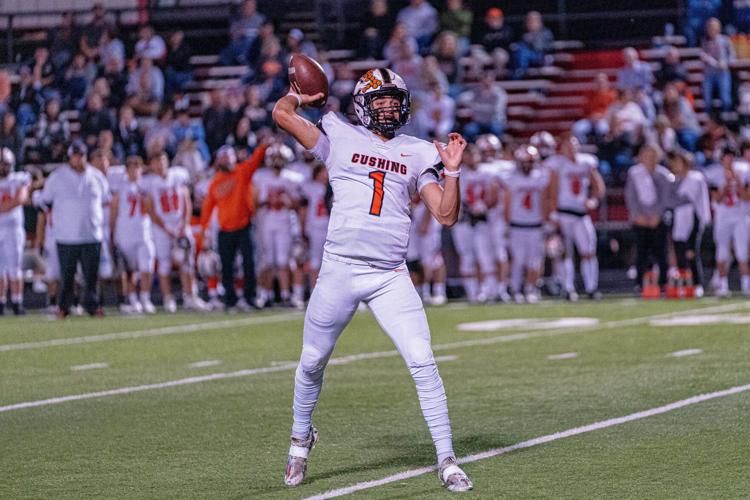 Cushing’s Blaze Berlowitz prepares to pass in Thursday night’s win at Skiatook. Berlowitz completed 10-of-11 passes for 256 yards, all in the first half. 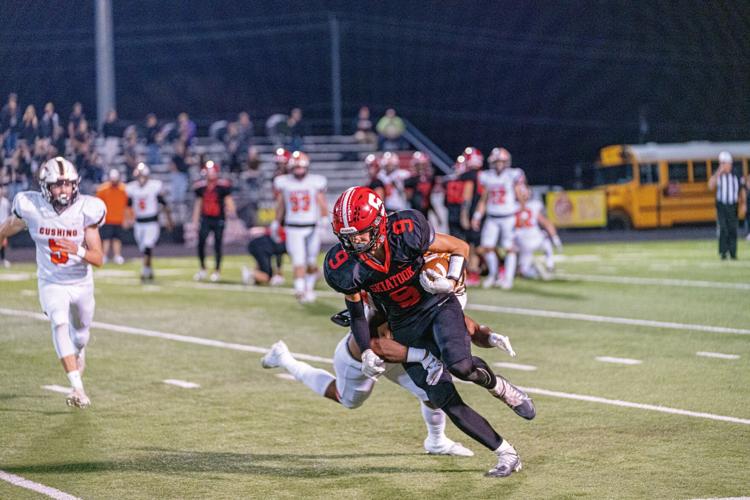 Skiatook’s Nate Ledbetter tries to break a tackle as he runs against Cushing in Thursday night’s game at Skiatook. 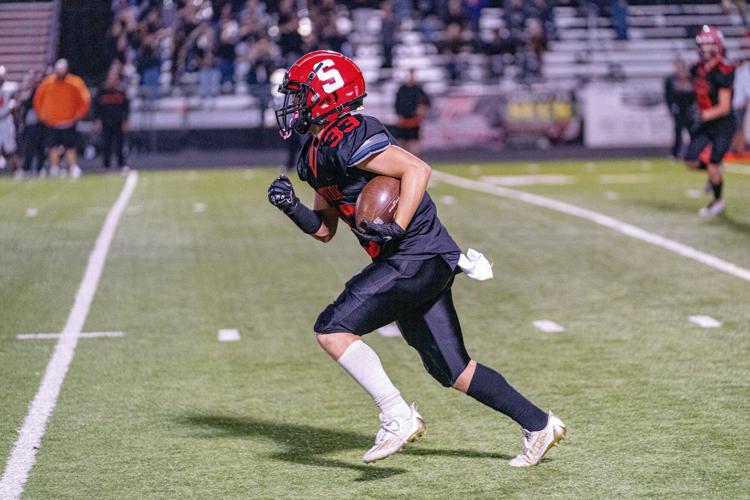 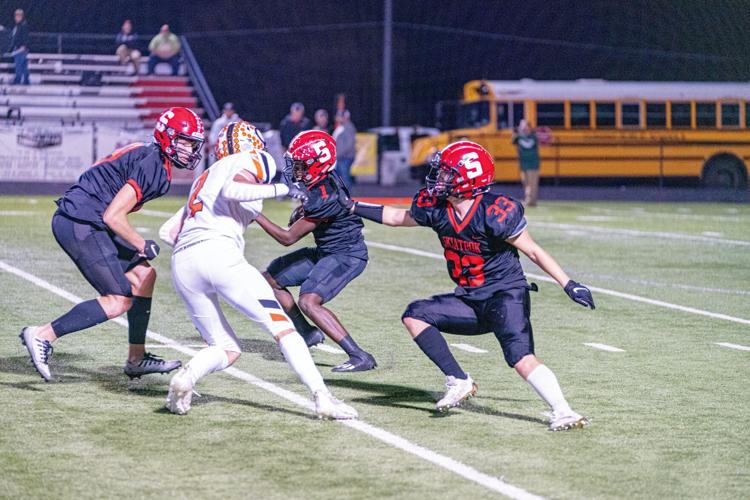 Skiatook’s Jackobie Jackson runs with the ball during Thursday night’s game against Cushing.

Larry Lewis For the Tulsa World

SKIATOOK — Blaze Berlowitz and the Cushing machine were completely efficient in being a crusher to Skiatook.

Berlowitz, a commit to New Mexico State, only had one incompletion, and it was a drop on a perfect pass. He had command, a strong arm with zip on his passes, and was mobile.

“I can’t say enough about what a great student, person, and player Blaze is,” said Cushing coach Rusty Morgan. “What I want people to know about Blaze is what a hard worker he is in both football and as a student, and what a great leader he is.”

A penalty that negated a 93-yard kickoff return for a touchdown on the opening play of the game by Noah Jones didn’t deter Cushing. The Tigers needed only five plays to go 92 yards in less than a minute to go up 7-0 with 11:02 remaining in the first quarter.

Berlowitz (6-foot-3, 200-pounds) completed TD passes of 15 and 27 yards to Brady Matheson on the first two Cushing series of the game.

“We’ve had excellent starts to games this season,” Morgan said. “We come out ready to play. We’ve got great senior leadership.”

So dominant was Cushing that the Tigers scored touchdowns all 11 times they had a chance to. Of the touchdowns, 10 were on offense, and one was on a punt return.

Camden Crooks returned a punt 74 yards for a touchdown with 2:15 left in the first quarter to put Cushing up 35-0. By early in the second quarter, a running clock was being used.

Skiatook (2-8, 1-6) couldn’t contain Cushing’s second- and third-string offense. The reserves played the entire second half for the Tigers.

The Tigers were so dominant in the first half where they led 56-0 that they ran only 20 offensive plays in the half, gaining 392 yards, or 19.6 yards per play. For the game, Cushing gained 525 yards in just 31 plays.

With its next football title-game contract, the OSSAA wants a five-year situation

After this weekend’s championship games at UCO, that contract will have expired. For a new contract that would take effect in 2023, the OSSAA’s bid process begins in January.

Bill Haisten: The Bixby machine does it again, adding to its stack of milestones

From studying Michael Vick to running track to improve his speed, the sophomore dual-threat quarterback is becoming a handful for opposing defenses.

Kirby accounted for 291 yards and six first-half touchdowns to lead the second-ranked Spartans past No. 4 Owasso before 7,800 fans at Chad Richison Stadium.

During Bixby's championship years, head coach Loren Montgomery has had the same coordinators.

These Union players will never forget the night that their 2022 postseason intersected with Mason Willingham, Bill Blankenship and the Rams.

The Bulldogs will have an opportunity to win their sixth state championship in 12 years, and the appearance will be the eighth in coach Dale Condict’s tenure at Wagoner.

Bill Haisten: After a 1-4 start, Bill Blankenship and Owasso return to the pinnacle

Before the Rams would face favored Union in the semifinals, Bill Blankenship used a painful memory as a motivational tool.

Cushing’s Blaze Berlowitz prepares to pass in Thursday night’s win at Skiatook. Berlowitz completed 10-of-11 passes for 256 yards, all in the first half.

Skiatook’s Nate Ledbetter tries to break a tackle as he runs against Cushing in Thursday night’s game at Skiatook.

Skiatook’s Jackobie Jackson runs with the ball during Thursday night’s game against Cushing.