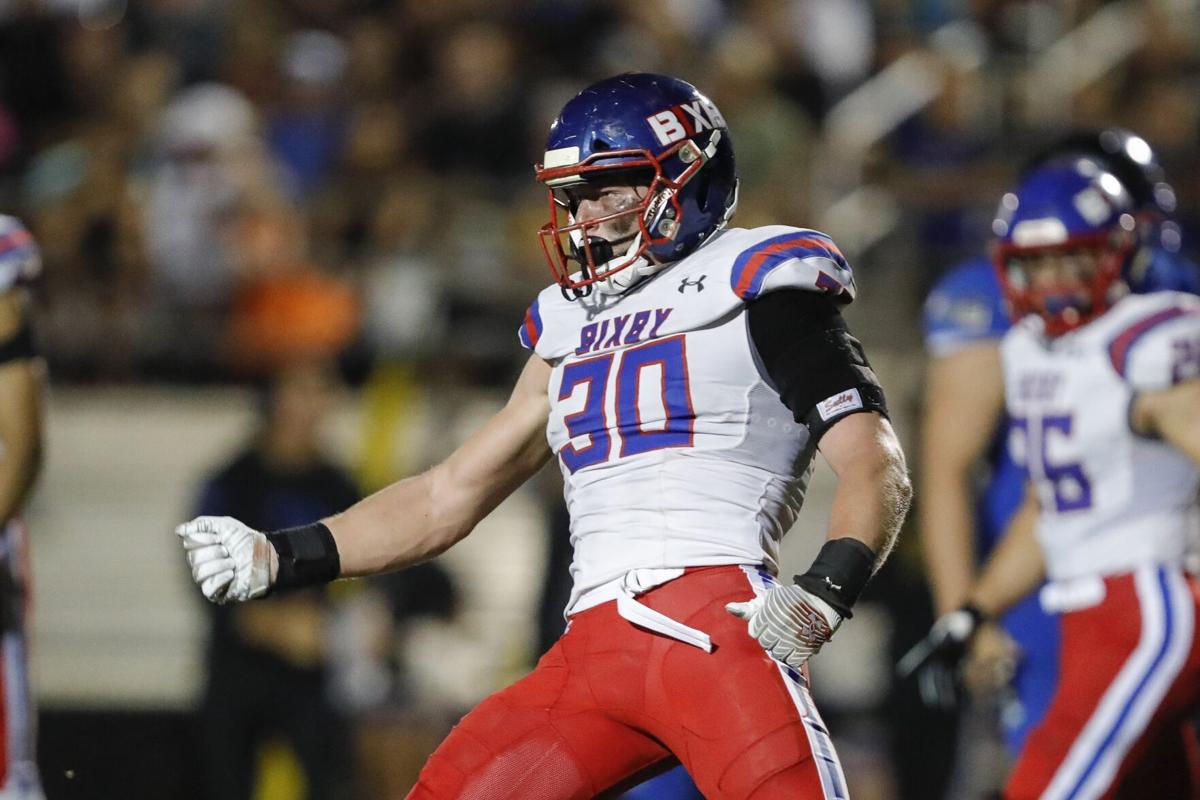 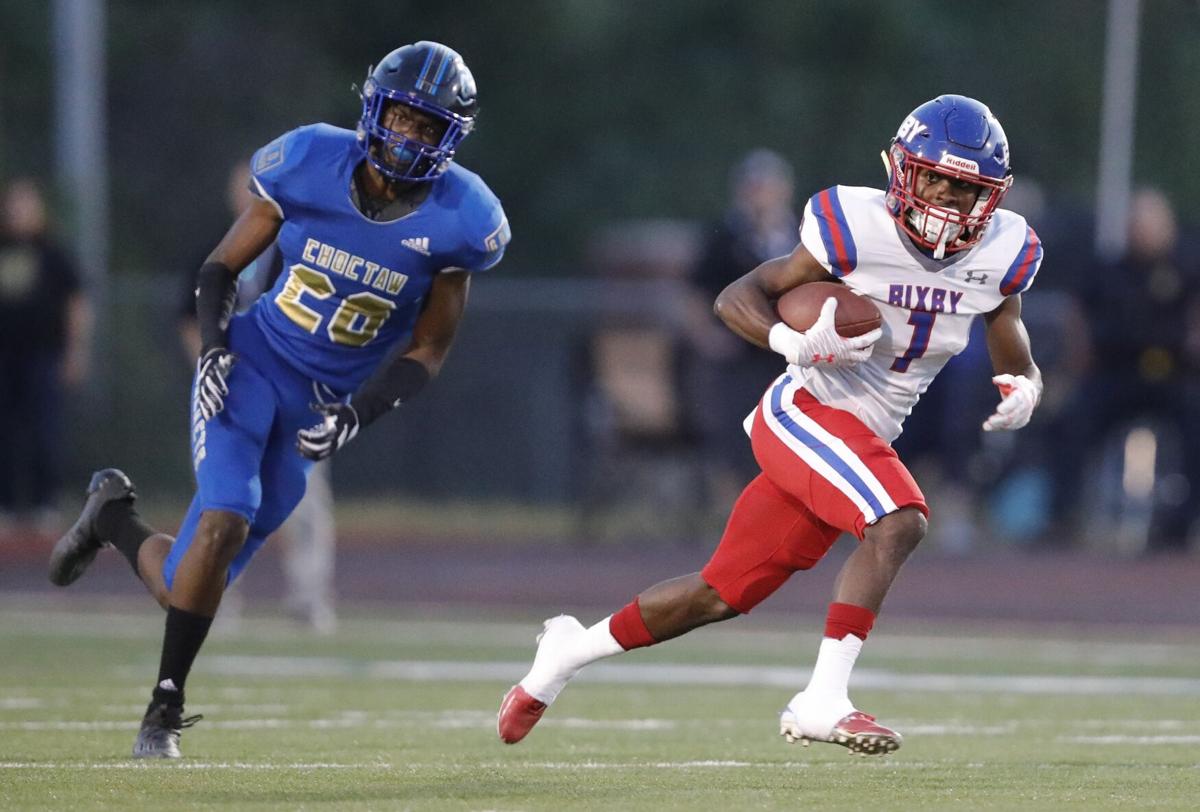 During Bixby's first possession on Friday, Braylin Presley scored on a 70-yard pass play. The top-ranked Spartans went on to win 70-7. 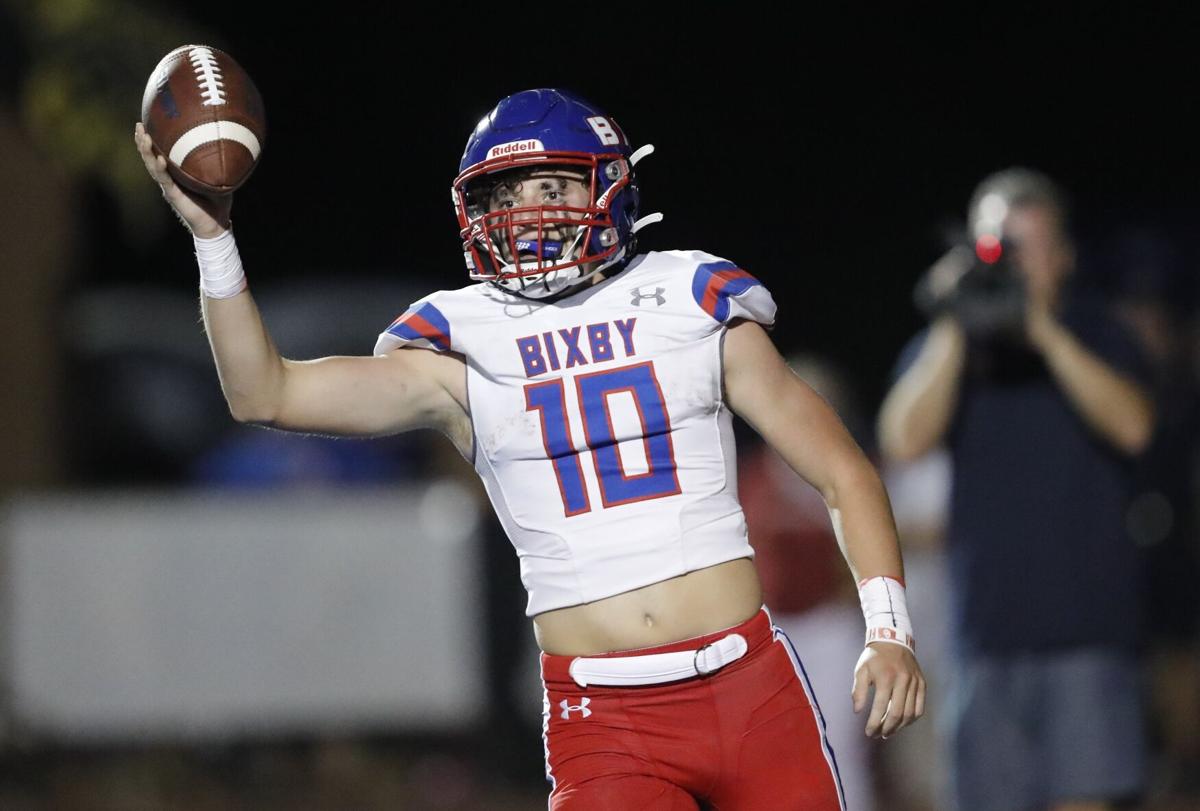 CHOCTAW — Forty-six minutes before kickoff, Bixby players jogged onto Bill Jensen Field for their pregame routine. From the Choctaw students, and even some of the Choctaw adults, there was a chant.

Top-ranked Bixby arrived with a heavy reputation (six Class 6AII titles in seven years) and heavy numbers (averages of 57 points and 524 yards per game). The Spartans hadn’t lost a football game in 1,141 days (since the 2018 opener against Jenks), and from the Choctaw people there was the “overrated!” greeting.

It amused media members in the packed press box.

In a rematch of last year’s championship-game classic (a three-point Spartan victory), this was No. 1 Bixby vs. No. 2 Choctaw. Adding to the spectacle was the largest crowd ever for a Choctaw football game.

This was a Choctaw shot at ending the Bixby win streak, and this is how that went: On the first snap of the game, Bixby’s Braylin Presley scored on a 77-yard run play. The touchdown was wiped out by a holding penalty.

On the next snap, Presley caught Christian Burke’s short pass and ran 70 yards. He was never touched. That TD did count.

Only 28 seconds into perhaps the mostly hotly anticipated football game in Choctaw history, those who had chanted “overrated!” were sickened and silenced.

In what underscores the difference between No. 1 Bixby and everybody else in 6AII, the Spartans overwhelmed the No. 2-ranked Yellowjackets 70-7.

It would have been 77-7, but after driving to the Choctaw 3-yard line, the Spartan backups took a knee three times to end the game.

Immediately after time expired, the scoreboard was turned off.

Presley followed his 70-yard touchdown play with a 41-yard touchdown run and an 18-yard pass completion on a trick play. While Burke was 17-of-27 passing for 281 yards, special-occasion backup QB Connor Kirby rushed for 118 yards and three touchdowns.

There were Bixby TDs also from Luke Hasz (the first of the season for the OU-committed tight end), Jersey Robb, Zach Blankenship and Camden McCrary. Hasz totaled seven catches for 86 yards.

Preston Solomon is a perfect example of Bixby’s weaponry depth. He hasn’t been targeted on a frequent basis this season, but the Spartan senior wide receiver gets wildly positive results when he does catch the ball.

During the second period, Burke released a perfect deep ball that traveled 40 yards before falling into the hands of Solomon, who coolly made the play and rolled to the end zone to complete a 73-yard scoring connection.

On seven receptions this season, Solomon has averaged 38.3 yards per catch.

As this mismatch was televised statewide on Cox cable, a greater-than-usual audience saw an extension of the Bixby win streak to 42 games.

The Spartans took an impressive step toward the state record for 11-man football: Wagoner’s 48-game streak in 2014-17. If Bixby can finish with a perfect 13-0 season, the record would belong to Loren Montgomery’s Spartan program.

Five regular-season opponents had been viewed as possible threats to the Bixby streak: Jenks, Stillwater, Choctaw, Sand Springs and Booker T. Washington. The Spartans won 23-15 at Jenks and smoked Stillwater and Choctaw by a combined score of 112-21. That leaves Sand Springs (next week in Bixby) and Booker T. Washington (on Nov. 5 in the regular-season finale at BTW’s S.E. Williams Stadium.

You don’t often see an exclamation mark in the paper, but the Tulsa World’s Mike Brown effectively used one to emphasize the magnitude of a defining Bixby statistic: that the Spartans, in advance of their Choctaw test, had not trailed at any point in its previous 58 quarters (or “14½ games!”, as Mike wrote).

Bixby certainly never trailed at Choctaw, so running parallel to the win streak is Bixby’s streak of having not trailed in its last 62 quarters of football (or 15½ games!).

By the time Kirby scored on a 22-yard, fourth-down run early in the fourth quarter, about half of the Choctaw fans already were elsewhere. The several hundred Bixby fans seated across the field — most of them stayed until the end of another Spartan blowout.

If you haven’t attended a Bixby game during this 2018-21 window of greatness, then you just can’t understand how historically impressive the Spartans have been.

View from the sidelines: Bixby vs. Choctaw

During Bixby's first possession on Friday, Braylin Presley scored on a 70-yard pass play. The top-ranked Spartans went on to win 70-7.