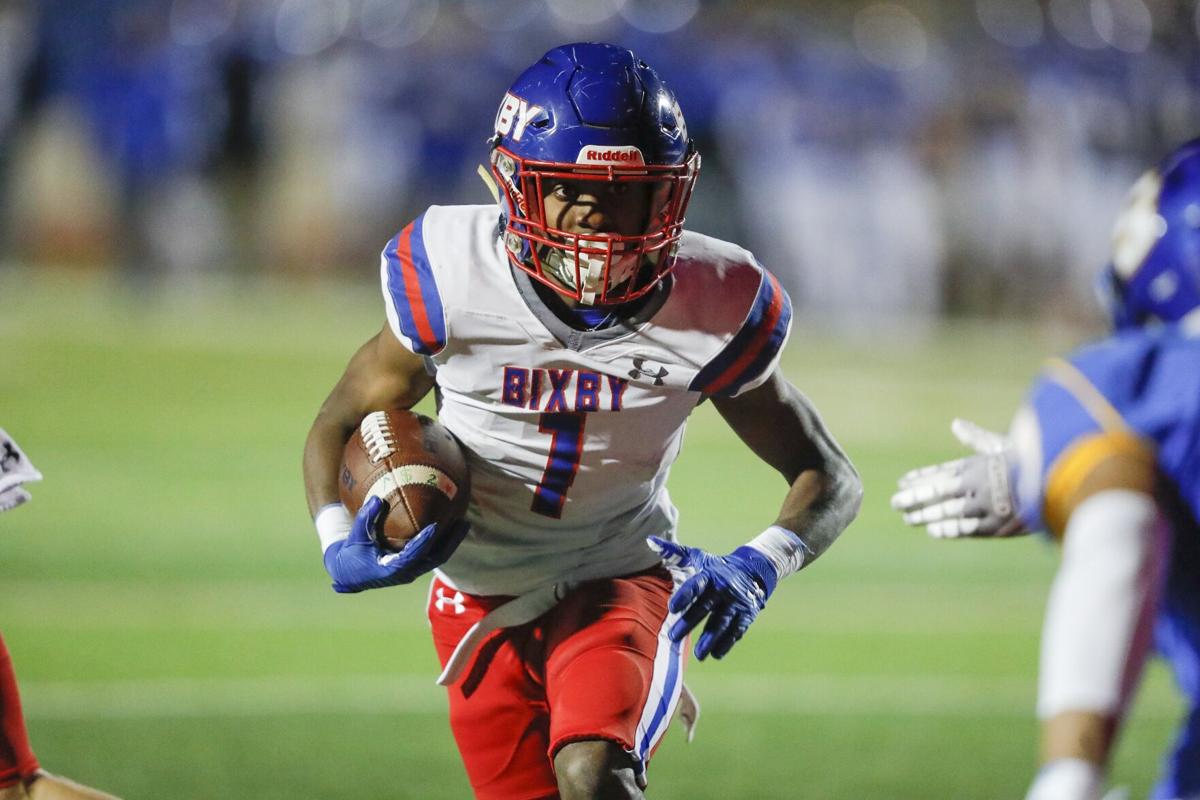 On this run play against Stillwater last week, Bixby running back Braylin Presley scored the 99th touchdown of his career. 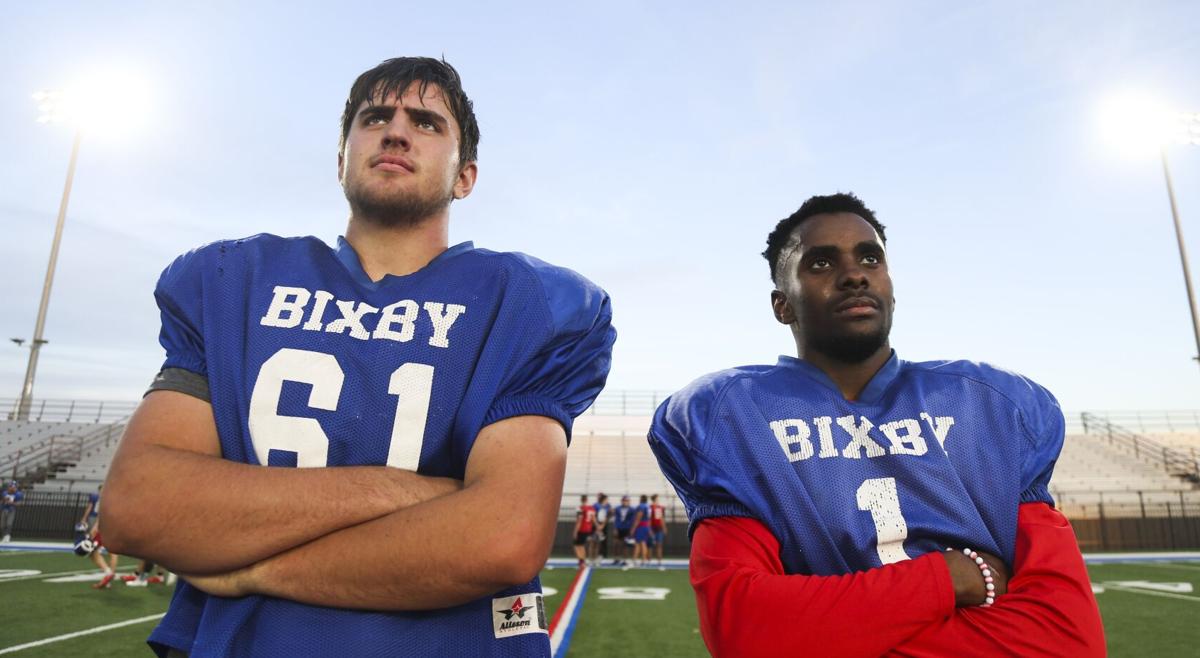 Center Cody Paschall (left) and running back Braylin Presley are two of the 31 Bixby seniors who will close their high school football careers with the Dec. 2 Class 6AII championship game against Deer Creek. 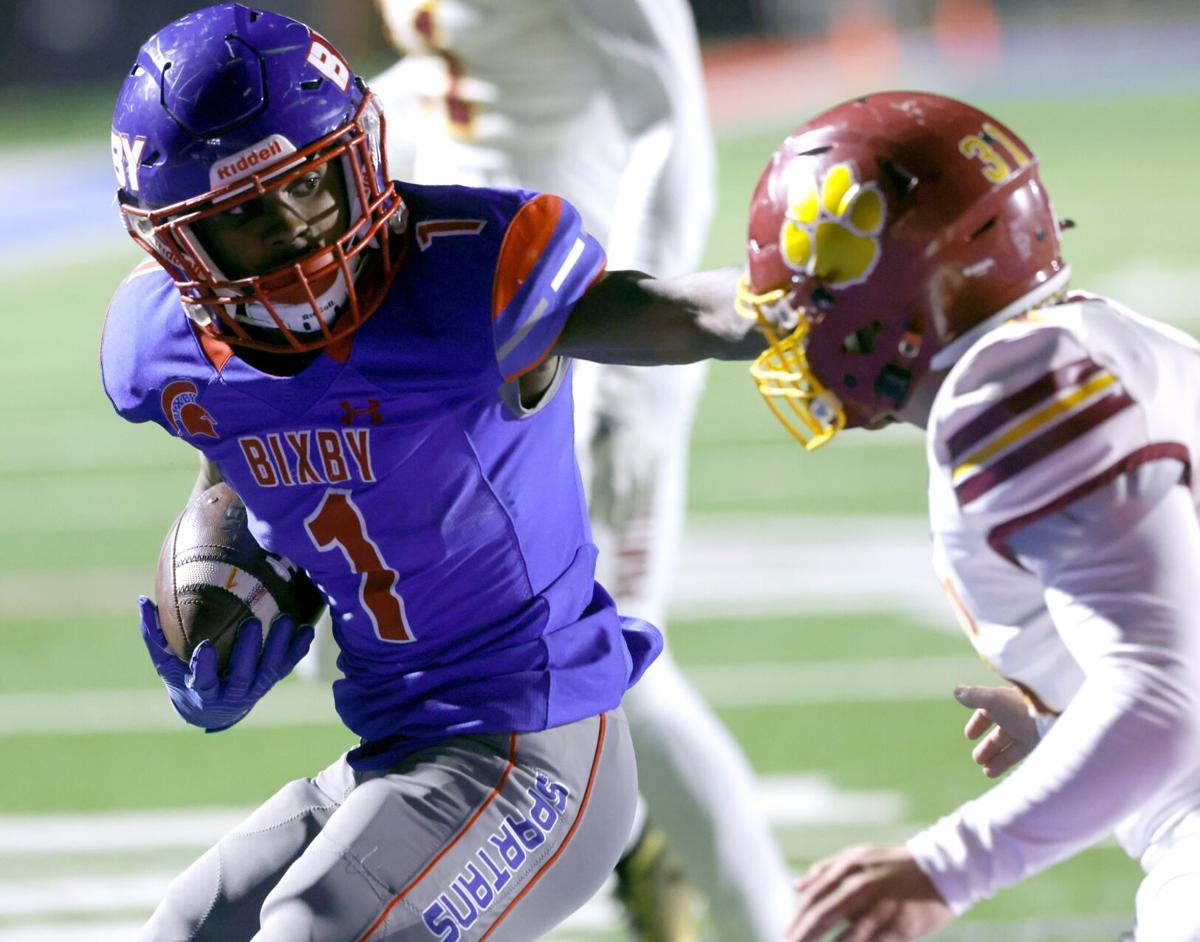 Bixby’s Braylin Presley gets past the Putnam City North defense and into the end zone to make the score 36-0 in the first quarter during their playoff game Nov. 12 at Spartan Stadium in Bixby.

BIXBY — In that his career touchdown total stands at an astounding 99, it’s safe to presume that Braylin Presley will score at least one more TD in the final game of what has been one of the more dazzling individual careers in state history.

On Thursday, Dec. 2, when they face Deer Creek in the Class 6AII championship at the University of Central Oklahoma in Edmond, Presley and 30 Bixby senior teammates reach the finish line in the quest for a fourth consecutive title and a record-breaking 49th consecutive victory.

With all due respect to a 10-2 Deer Creek Antlers squad, Bixby has be considered an extremely heavy favorite to get that fourth consecutive gold ball (and the program’s seventh in eight years of 6AII competition) and that 49th consecutive win (erasing the Oklahoma 11-man football record of 48, set first by Wagoner in 2014-17 and matched by Bixby when it defeated Stillwater last week).

The average score of Bixby’s games this season: 60-11.

A pretty good Stillwater team beat Deer Creek in September. In two meetings with Stillwater this season, Bixby prevailed 42-14 and 48-6.

Before Presley drives again to the end zone, he will have driven to Stillwater for this Saturday’s Bedlam battle at Boone Pickens Stadium.

A running back who announced his commitment to Oklahoma State in April, Presley is attending Bedlam as a guest of the Cowboy program. He’ll be seated in a section positioned against the Boone Pickens Stadium corner from which the Cowboys run onto the field for their high-stakes collision with OU.

Braylin might be close enough to reach out and pop the hand of his brother, OSU sophomore wide receiver Brennan Presley, as he and the other Cowboys march from their locker room to the turf.

On Dec. 15 — National Signing Day for football athletes — Braylin says he’ll sign with Oklahoma State and take the first official step toward becoming one of those Cowboys.

“Since I committed to OSU, there really haven’t been any new schools that called or texted or sent anything,” Braylin Presley reports. “I would never be (rude) to any other school, but I’ve made it known that I’m a Cowboy.

Presley has been informed that in the Deer Creek game, he needs exactly 100 yards to supplant Nic Roller as Bixby’s career rushing leader.

For several weeks, Presley was bothered by a sore ankle. The Tulsa World’s 2020 state Player of the Year provides an update that might be chilling for Deer Creek’s defensive coaches and players: “It’s so much better now. I’m pretty much 100%.”

The 2018 Spartans opened that season with a loss to Jenks. Included in the subsequent 48-game win streak were 2019, 2020 and 2021 victories over Jenks. Current Bixby seniors set standards against which all future Spartan football classes will be measured.

As 14-year-olds, they had no idea that they would experience such a historic four-year run of success.

Presley and I have this in common: We are members of the Jack Puckett Fan Club. Over the past two seasons, I’ve not seen a better or more complete defensive athlete than Bixby’s 6-foot-1, 210-pound interior linebacker.

“Jack is a truly great player,” Presley said. “At the college level, I really believe he could be a Malcolm Rodriguez-type of player.”

Because Paschall doesn’t plan to play at the college level, he’ll close the football chapter of his life with an impressive distinction. In Montgomery’s 12 seasons as the Bixby head coach, Paschall is his only three-year starter at the critically important center position.

“This has been an amazing experience for all of us,” Paschall said, “but we don’t talk about how we’re nearing the end of it. We’ve still got work to do. But, yeah, it will feel a little weird when I’m not playing football anymore. I’ve been playing since kindergarten.”

As a durable blocker who always knows his assignment and consistently, cleanly executes the snap to his quarterback, the 6-foot-2, 240-pound Paschall is an important piece of the Bixby dynasty. He has the football talent to play at a small-college level, but plans in 2022-23 to attend Tulsa Community College.

As he pursues a business degree, Paschall will be a student with practical experience. For two years, with assists from his dad and a brother, he has managed his own mowing-and-landscaping enterprise.

Of having been involved in most of the Presley touchdowns, Paschall said, “It’s fun to block for a guy who can do something special on nearly every play.”

Paschall says his favorite Presley TD came on a 12-yard pass play with 64 seconds remaining in the 2019 championship game. In a classic, Bixby outlasted Stillwater 40-36.

After Bixby eliminated Stillwater last week at Langston, and after Montgomery addressed his players in the locker room, Presley plugged in a Bluetooth speaker and someone triggered the start of a celebration playlist. A dance party ensued.

“We don’t do that after every game,” Presley explained. “If it’s a really big game or a championship game, we’ll play some music and take pictures. If it’s a special night, we like to celebrate.”

During recent radio talk shows both in Tulsa and in Oklahoma City, and in press boxes throughout the Tulsa area, this has been a frequently asked question: Might the 2021 Spartans have been the best Oklahoma high school team ever? Or perhaps the 2019 Spartans?

From a pure domination standpoint, and with regard to their weaponry depth, the 2021 Spartans absolutely command consideration. However, most football people probably wouldn’t budge from their belief that the 1997 Jenks Trojans and their amazing defense were the No. 1 Oklahoma squad of all time.

To determine Bixby’s place in history, it’s better to look at bigger pictures. Three consecutive 6AII championships in 2014-16 and three more in 2018-20. Plus, of course, the win streak.

If talk-show hosts and sports writers have a license to express “best team ever” opinions, Presley certainly is qualified to speak on the subject.

“I’ve heard people say we might be the best team to come out of Oklahoma,” Presley said. “In this eight-year span, I think that’s probably true.

When the 2022 season begins, Presley expects to be on the Oklahoma State roster, and Bixby athletics will have graduated to Class 6AI competition.

Since Class 6A was split into two divisions before the 2014 season, the Spartan football program has owned 6AII. If Bixby does conquer Deer Creek on Dec. 2, the 2014-21 Spartans would have recorded an overall record of 88-14 with seven championships.

It’s not quite perfect, but it’s awfully close.

Bixby running back Braylin Presley, the Tulsa World’s 2020 state football player of the year, is giving Tulsa World sports columnist Bill Haisten an inside look at his senior season. This is the fourth installment in a monthly series that began in the High School Football Preview in August.

Collinsville remains perfect on the season with a dramatic win in 5A. Holland Hall and Lincoln Christian will meet again for the 3A title.

On this run play against Stillwater last week, Bixby running back Braylin Presley scored the 99th touchdown of his career.

Center Cody Paschall (left) and running back Braylin Presley are two of the 31 Bixby seniors who will close their high school football careers with the Dec. 2 Class 6AII championship game against Deer Creek.

Bixby’s Braylin Presley gets past the Putnam City North defense and into the end zone to make the score 36-0 in the first quarter during their playoff game Nov. 12 at Spartan Stadium in Bixby.