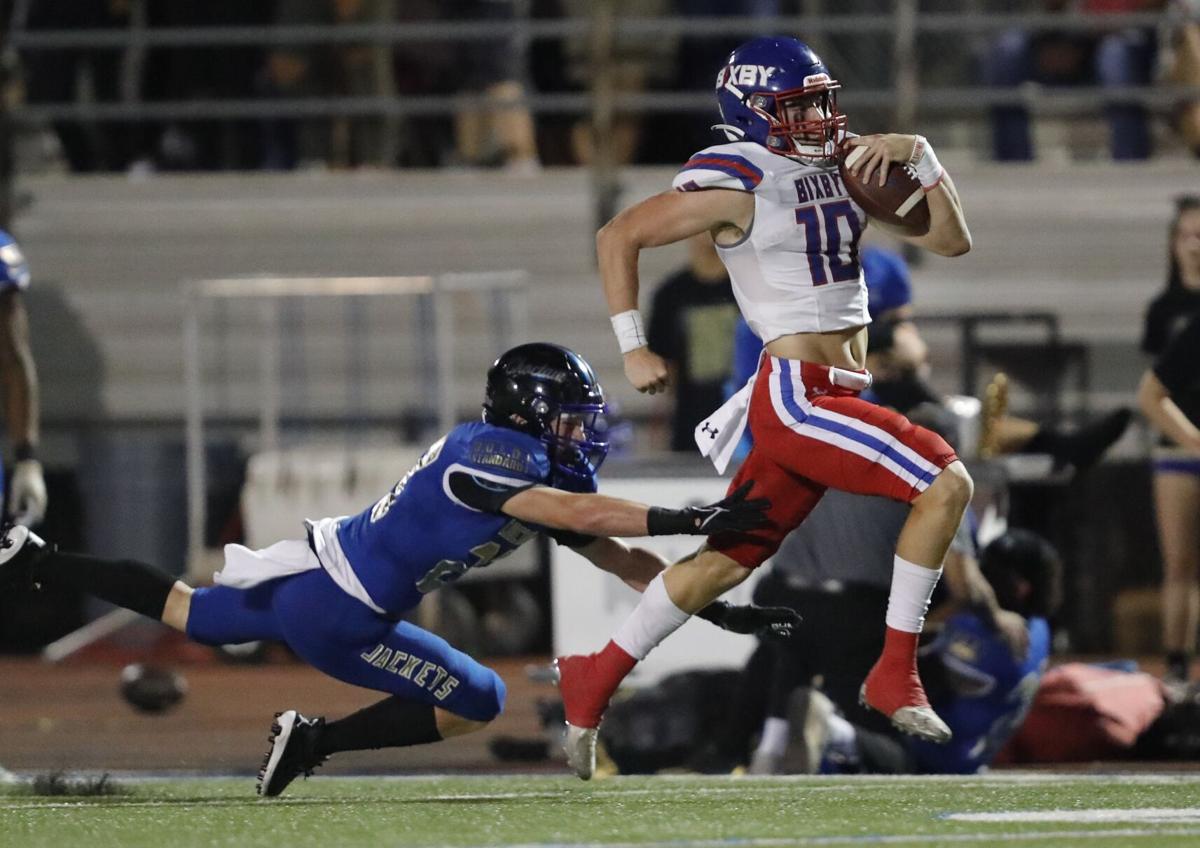 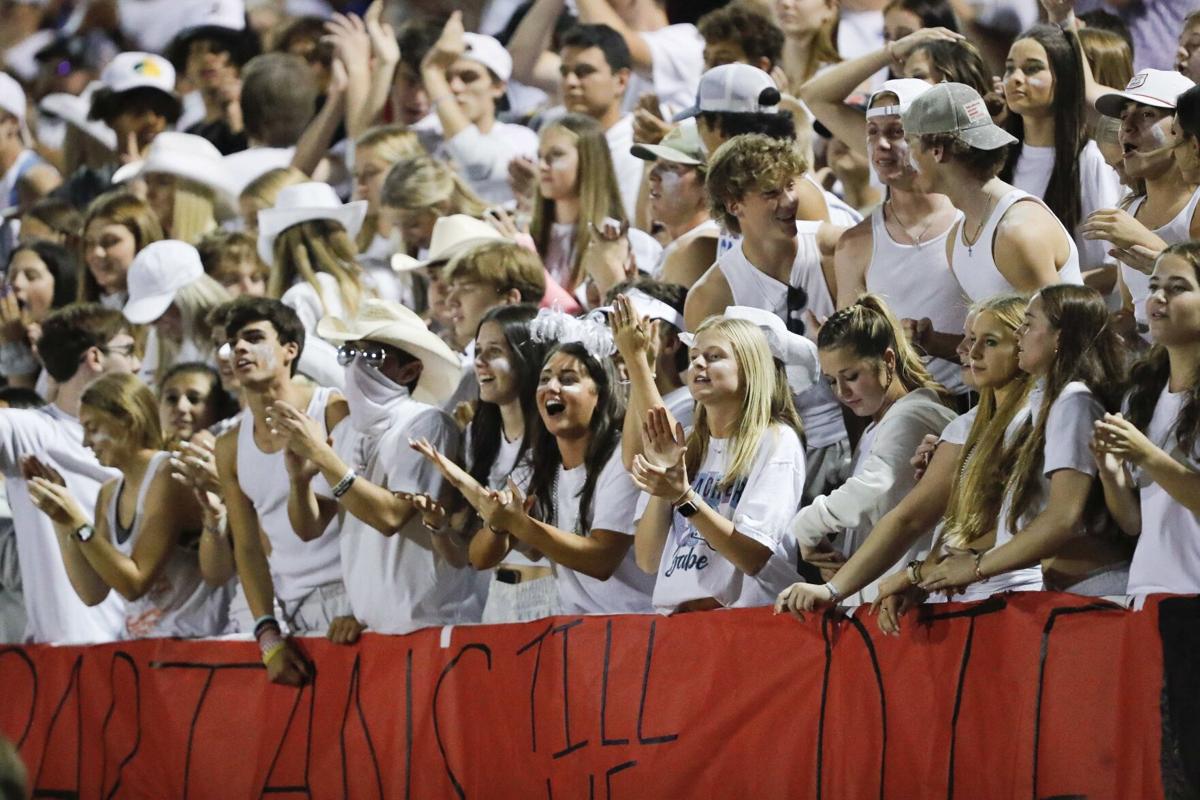 At Choctaw on Friday, the Bixby student section saw the Spartans extend their win streak to 42 games.

Until a few days ago, in my lifetime of covering college football and high school football, I had never before worked a game in which the winner finished with exactly 70 points.

POLL CLOSED To vote for high school football player of the week, see the profiles below of each candidate and then cast your vote below. Voting ends at 10 a.m. Tuesday. Your choice for player of the week, along with the World’s choice, will be published Wednesday in the Tulsa World and on OkPrepsExtra.com.

When a No. 1 is matched with a No. 2, there’s the expectation of a back-and-forth, dramatic exercise. When No. 1-ranked Bixby visited No. 2 Choctaw for one of the most hotly anticipated games in Oklahoma, there was no back-and-forth.

Instead, there was a lot of up-and-down. Bixby marched up-and-down the field for 10 touchdowns and 565 total yards.

The crowd was the biggest ever for a Choctaw home football game. The pregame atmosphere was as good as it gets. There was the belief that Bixby-Choctaw on Friday might be a game that would resemble what OU-Texas was on Saturday, but the Spartans didn’t cooperate. On the first play of the game, Bixby running back Braylin Presley scored on a 70-yard pass play.

While the Spartan win streak is an every-week conversation topic, this distinction wasn’t realized until Saturday morning: With the 63-point knockout of Choctaw, Bixby’s streak of 42 consecutive wins now is tied for the second-best in the history of Oklahoma 11-man high school football.

In Class 6AII, there is a three-game postseason. If Bixby is destined to advance to the championship game for the eighth time in the eight-season history of 6AII competition, then there are seven games remaining in the Bixby season. Seven victories would push Bixby to the magic number of 49 consecutive wins.

While the Spartan program has a strong offensive identity and currently averages 58.3 points per game, I marvel at the technical proficiency and ferocity of Bixby’s tackling. Spartan physicality was a factor in Choctaw’s ball-security issues on Friday. The Yellowjackets lost six fumbles.

It finally occurred to me that Spartan linebacker Jack Puckett may be one of the 10 best players in the state.

It occurred to me also that Bixby has the best-case scenario at the quarterback position. Starter Christian Burke is a 67% passer (with only two interceptions on 145 attempts this season), while Connor Kirby is used as an intense run-game weapon.

Kirby punishes defenders while averaging 6.3 yards per rush attempt. In a third-and-3 situation, he’s the perfect option. He’ll get at least 4 yards and might get 15. At Choctaw, Kirby ran for 118 yards and three TDs.

The most brilliant of all luxuries: having Presley as the best player in the state, and with fresh legs. Through six games, he’s had only 53 carries for 616 yards (11.6 per attempt and nine TDs). In the playoffs, while opposing defenders contend with the wear-and-tear of a full season, Presley’s tank should be filled with fuel.

After the Choctaw game, Cameron Jourdan of The Oklahoman went to the field to talk with Montgomery — the mastermind and 12th-year head coach of the Bixby dynasty. I know from experience that Montgomery doesn’t like to discuss the win streak, but Jourdan mentioned it in a question.

Montgomery’s response: “We don’t talk about that.”

In 31 of the 42 games during the streak, Bixby has totaled at least 40 points. On nine occasions, the Spartans scored at least 70. In its past three games, Bixby outscored district opponents Bartlesville, Putnam City West and Choctaw 222-13.

It’s been a good or even special season for several Tulsa-area teams like Holland Hall, Jenks, Lincoln Christian, Union, Berryhill, Beggs, Booker T. Washington (now 5-1), Sand Springs (now 5-1 after losing to Booker T. in a great game), Owasso, Coweta, Metro Christian and Glenpool, but the ongoing greatness at Bixby is on a different level of “special.”

View from the sidelines: Bixby vs. Choctaw

At Choctaw on Friday, the Bixby student section saw the Spartans extend their win streak to 42 games.