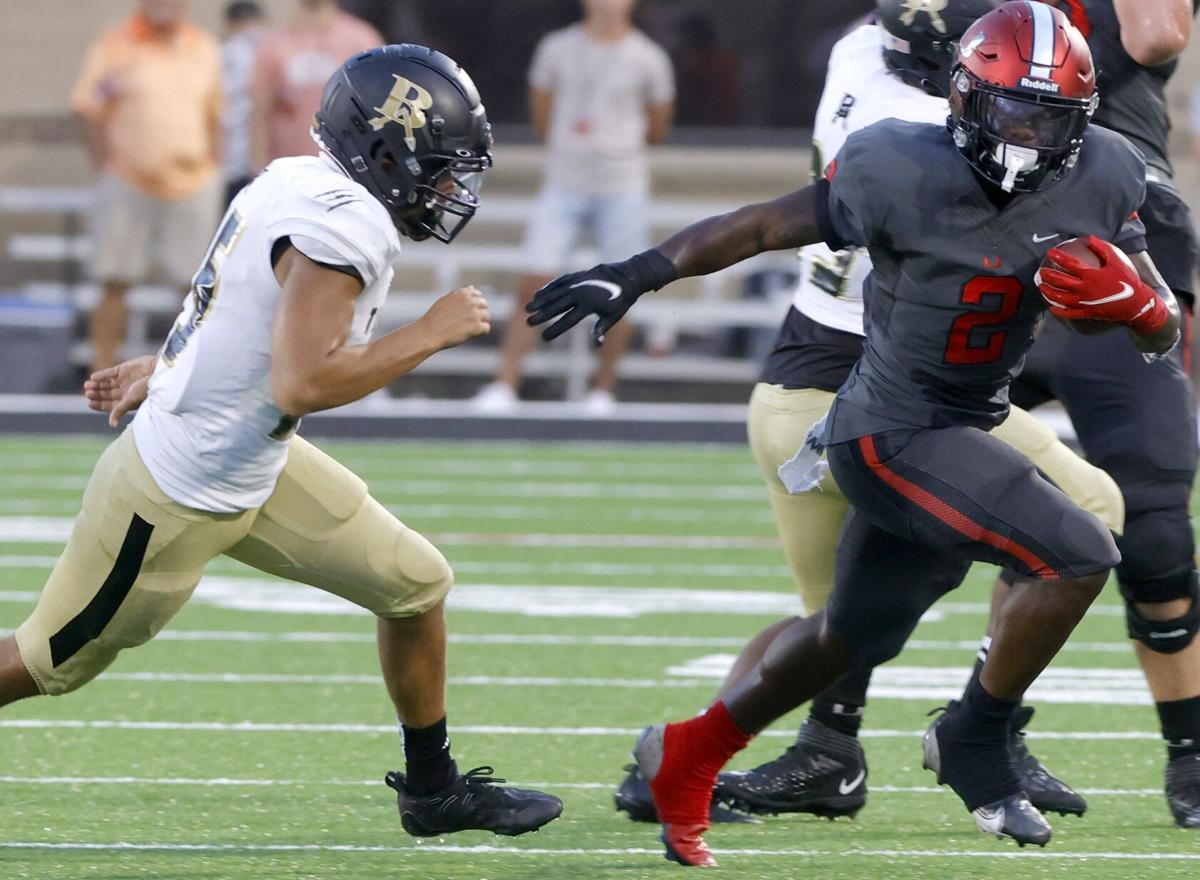 Union’s Rovaughn Banks gets room to run against Broken Arrow during their game last Friday at Union-Tuttle Stadium. 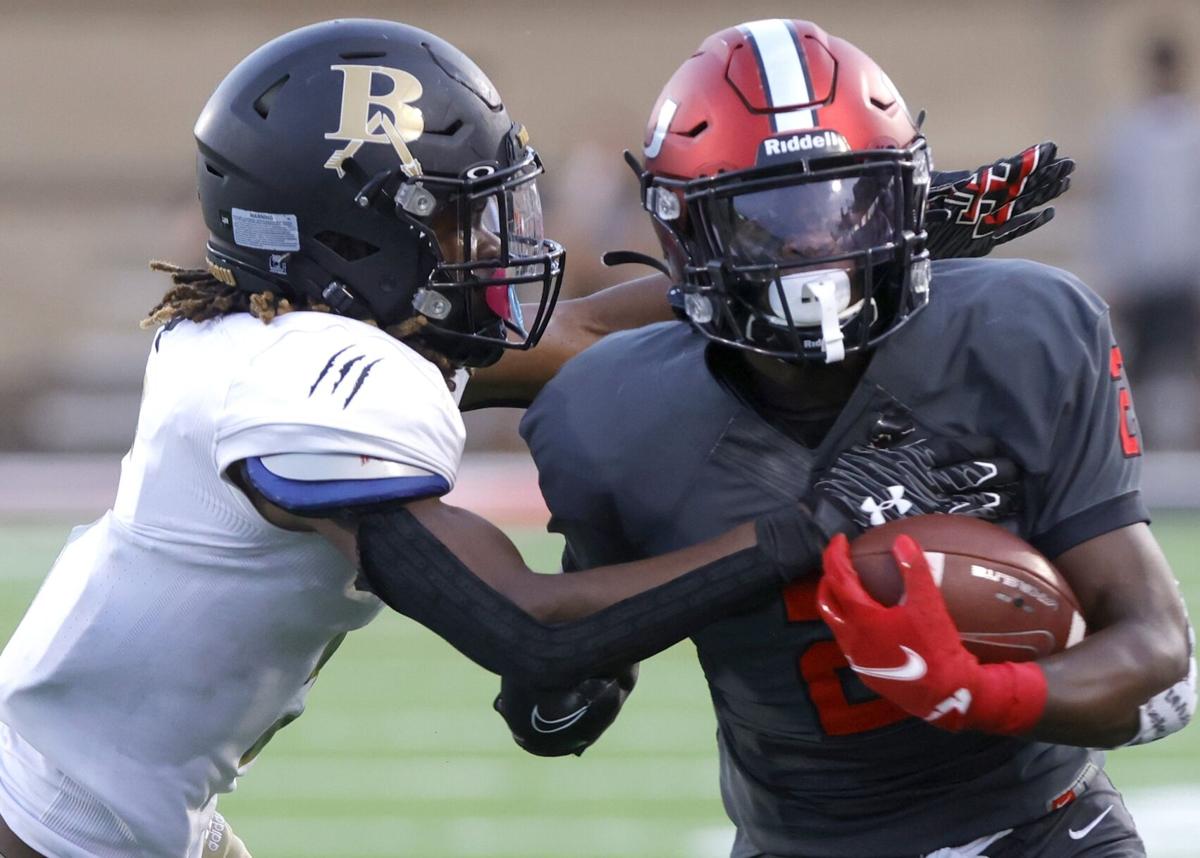 Rovaughn Banks has had to reinvent himself as a football player over the past two years. But the Union senior running back doesn’t seem to mind.

Although he isn’t playing quarterback anymore, he still gets to throw an occasional touchdown pass.

It happened two weeks ago when Union opened the 2021 season by dismantling Mansfield (Texas) Lake Ridge 48-20 in the first game in newly remodeled Union-Tuttle Stadium.

Banks moved right with a pitch from Grayson Tempest, scanning the field for running room. But when defensive backs came flying forward, he lofted a soft pass over their heads to senior teammate Da’Monn Sanders for a 13-yard score.

The old, reliable halfback option play works almost every time — if the passer makes sure to put the ball on the money.

“I have confidence in my ability to throw the football,” Banks said. “It’s always fun throwing another touchdown pass and showing everybody the abilities I have.”

Banks showed those abilities in a more conventional way last Friday, carrying the ball 32 times for 210 yards and three touchdowns, leading Class 6A Division I’s No. 1 team to a 38-28 triumph over rival Broken Arrow. It was almost undoubtedly the best game of his career.

Fridrich hopes to see more of the same Friday from an offense averaging 277 rushing yards per game when Jenks visits Union-Tuttle for the 18th MidFirst Bank Backyard Bowl. It’s also the 67th meeting of the state’s most famous archenemies.

Banks played running back until the seventh grade, when he took over at quarterback for an injured teammate. As a sophomore, he competed against upperclassmen JD Geneva and Trent DeSmet for the varsity starting job, finally got onto the field in the second half of 2019 and came into last season as Union’s presumptive starter.

But he was quickly moved to running back in a perfect storm of circumstances that cratered the program. Union’s 0-4 start was the program’s worst in 42 years. And none of it was Banks’ fault.

The COVID-19 pandemic had already wiped out spring and summer ball. That meant Banks and his teammates had almost no time to learn the scheme brought by new offensive coordinator Dub Maddox, who had been so successful as a former Jenks quarterbacks coach and offensive coordinator.

The team was also saddled with a murderous schedule and numerous coronavirus quarantines that kept the roster in a state of flux.

Due to Union-Tuttle renovations, there were seven road games, including the first four at Bixby, Broken Arrow, Jenks and Owasso. Not many Oklahoma schools would have done better against that powerful quartet.

Said Maddox: “Rovaughn was just put in an unfortunate situation, having to learn the offense with no spring and summer ball. In the midst of all that, we saw how talented he was with the ball in his hands. We saw that (Tempest, then a sophomore) was talented, too, and able to manage the offense. So, we thought it would be better for us in the long run to have both athletes on the field at the same time.”

If Banks was disappointed with the change, he didn’t show it. Instead, he took it all in stride. Fridrich was impressed.

“That’s a pretty special kid to go through a transition like that, but it seemed seamless for him because of his love for his teammates,” Fridrich said. “His attitude was, ‘Wherever you think I need to be to help the team.’ A tribute to how well he handled it was his being voted (one of two team captains, with senior linebacker Gabe Ford).”

Union’s offense came together in a huge way at Mustang on Oct. 9. Starting taiback AJ Green and Banks combined for 393 rushing yards and five touchdowns as Union demolished Mustang 66-10.

Banks went for 165 yards and two TDs, averaging more than 20 yards per rush. The losing streak was over. Union went on to win its next six games, culminating with a semifinal playoff berth.

Fridrich said Banks’ leadership, ability and attitude have all contributed to Union’s resurgence as a potential champion. A program with nine previous titles hasn’t played in a state final since falling to Owasso in 2017.

“I see a kid who is 192 pounds and super strong in the weight room,” Fridrich said. “I also see a kid who is pretty quick getting down the track in the 100 meters. That’s a great athlete. But the other thing is that he just loves playing the game of football. It can be a Tuesday afternoon and he’s going to be the most excited kid we have on the field.”

Union’s Rovaughn Banks gets room to run against Broken Arrow during their game last Friday at Union-Tuttle Stadium.